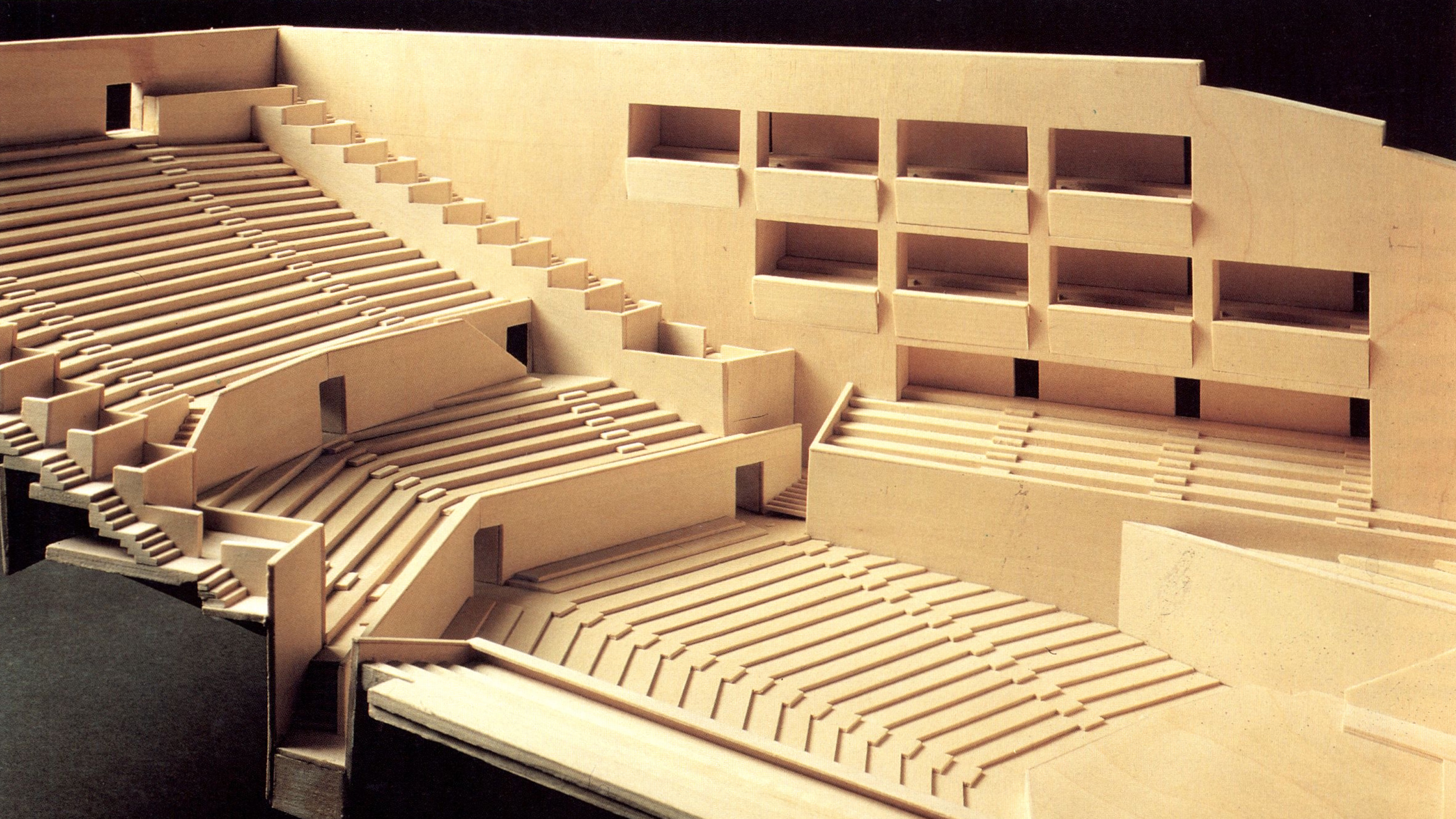 When a place is barren and offers no inspiration to the architect, the otherwise beneficial dialogue be­tween place and architecture is reduced, unfor­tunately for him, to a monologue. His obligations are multiplied, as the job of transforming the entire area falls upon him. If he is lucky, an anguished monologue can turn into a lively conversation.

The Barcelona Auditorium, with its contained and compact architecture, is one such case of forced autonomy (for this is all we mean when we say monologue). Yet it is to accomodate a most complex and extensive program: two con­cert halls - one with a seating capacity of 2,500 and the other one for 700 - not to mention all the ancillary services required (rehearsal rooms, a music museum, a library, an Institute for Ad­vanced Music Studies, recording studios, experi­mental music laboratories, restaurants, storage rooms, etc.). Given the area’s lack of characteris­tic features and the breadth of the program, this project opts for moderation and rigor, a strictly defined volume.

The volume is oriented toward the less isotropic scheme of the Cerdá Plan with extreme economy and courageously accepts the align­ments marked by the site’s most favorable di­mension as the longitudinal axis of the prism characterizing it. In this way the Auditorium can be taken to be just another building on Lepanto Street. Yet the Auditorium also recognizes that the ‘Ensanche’ (19th-century city enlargement) changes its tone at this point and loses energy due to the proximity of the Meridiana Avenue, and hence the volume presents itself frontally toward the axis of Ausias March Street, over whose extension it bridges.

But what does a compact architecture imply? On one hand, it requires a clear definition of the solid containing it. In this case this is a grid in a structure of reinforced concrete with dark stain­less steel panels on the outside and oak panels inside. In this way. the dialectic between interior and exterior is expressed even in the materials. On the other hand, compactness - and moreso when there is a polyvalent program to address - requires the presence of voids to mark distances and define contiguities.

But all this unfurling of open spaces within a hypothetical solid is inevitably based on exact schemes, on a rigorous floor plan. The old trick of planning architecture around a floor plan is very much present in this project. A look at these plans backs up one’s suspicion that the architects have tried to maintain the formal integrity of the halls. Indeed, the halls float in the space, like figures testifying to their use through their very form.

The main hall is decidedly rectangular, true to the canonical proportions recommended by acoustic technology. Nevertheless, in the organi­zation of the space it has been considered that the experience of music has little in common with the collective phenomenon of theater.

On the other hand, the desired continuity of the hall eliminates any kind of hierarchical classification. Similar criteria have been used in the smaller hall, though the result may at first sight look like traditional models.

The idea of a common foyer for the two halls has been avoided. Here the foyer is a public space in the form of a covered square where vehicles and pedestrians coincide, and it is presided over by a ‘lantern-impluvium,’ the true origin of the building. In Ruskinian terms, one might say it is the lamp which the architecture of the building lights up as a tribute to music.

But the distinction between the halls on the ground floor, where one might easily think there are two separate buildings, fades in the upper stories and down in the basement. The continuity here makes it possible for the dressing rooms and services to be shared, and for one to move about the building without ever having to step outside. The various elements of the program within it are easy to find, for though under the same roof they conserve their independence. Such inde­pendence comes to an extreme in the case of the museum, which is structured around a courtyard and has its own access, and in the case of the library, access to which is through a ramp whose job it is to liven up one of the little squares of the Auditorium. Continuity and independence are among the advantages of its compact architec­ture...[+]