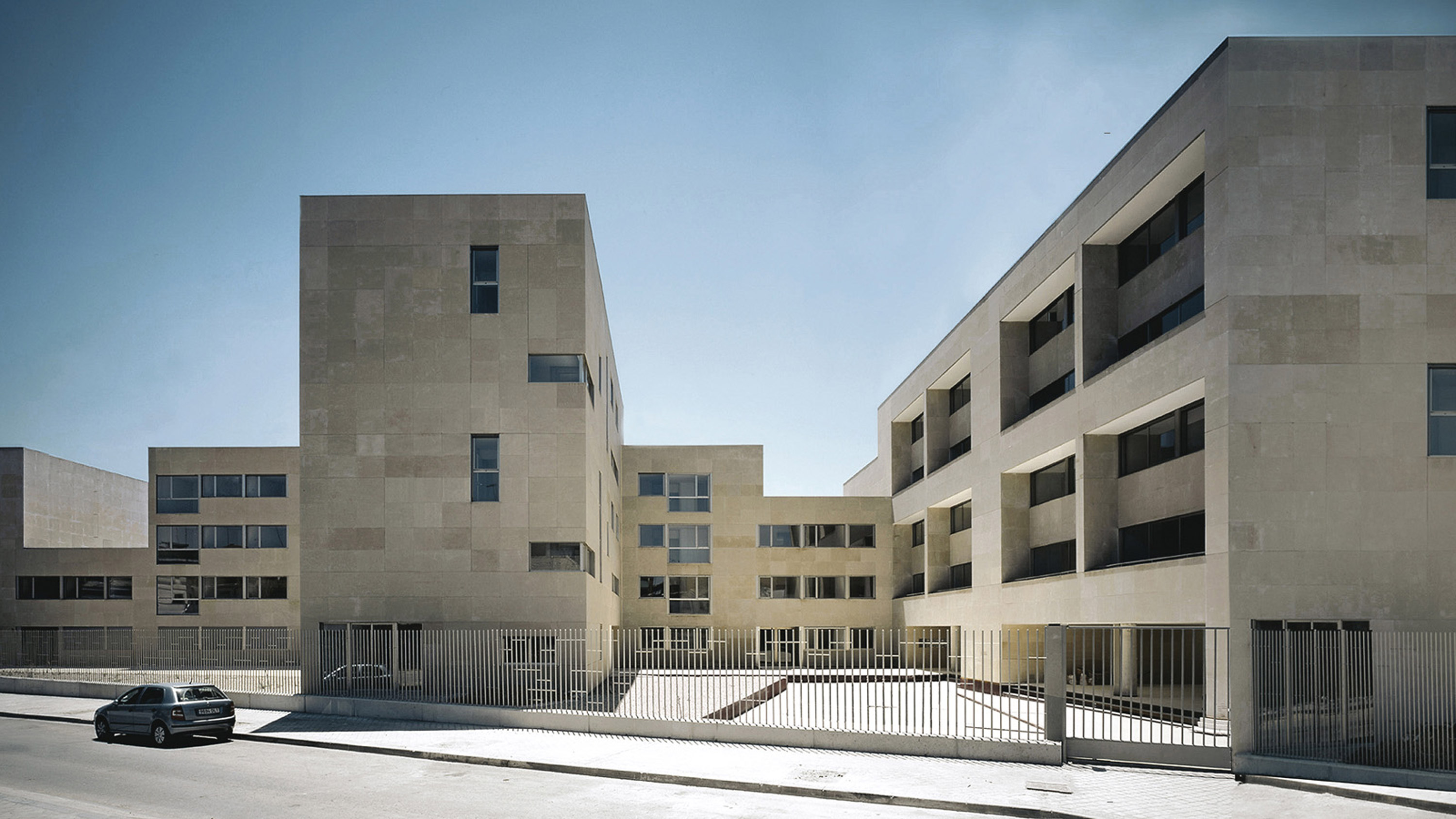 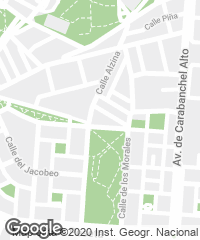 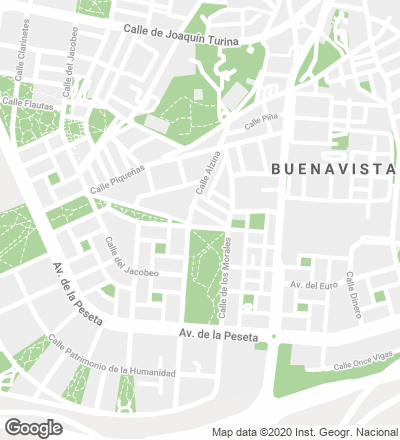 This building in the Madrid district of Carabanchel goes up on a plot that fills and wraps up the city fabric in a zone close to the M-40 ringroad. The essential guidelines of the project were determined by the characteristics of the site, a hinge-shaped plot of land that connects the new area of urban development with the fragmented and torn fabric of the city center. Thus, the buildings raised on a whole series of plots are meant to ‘sow up’ the existing edgesof the city, blurred edges, with the bold new development. Settled in the direction of the new Carabanchel Alto avenue, the plot belongs to this set of bordering sites. 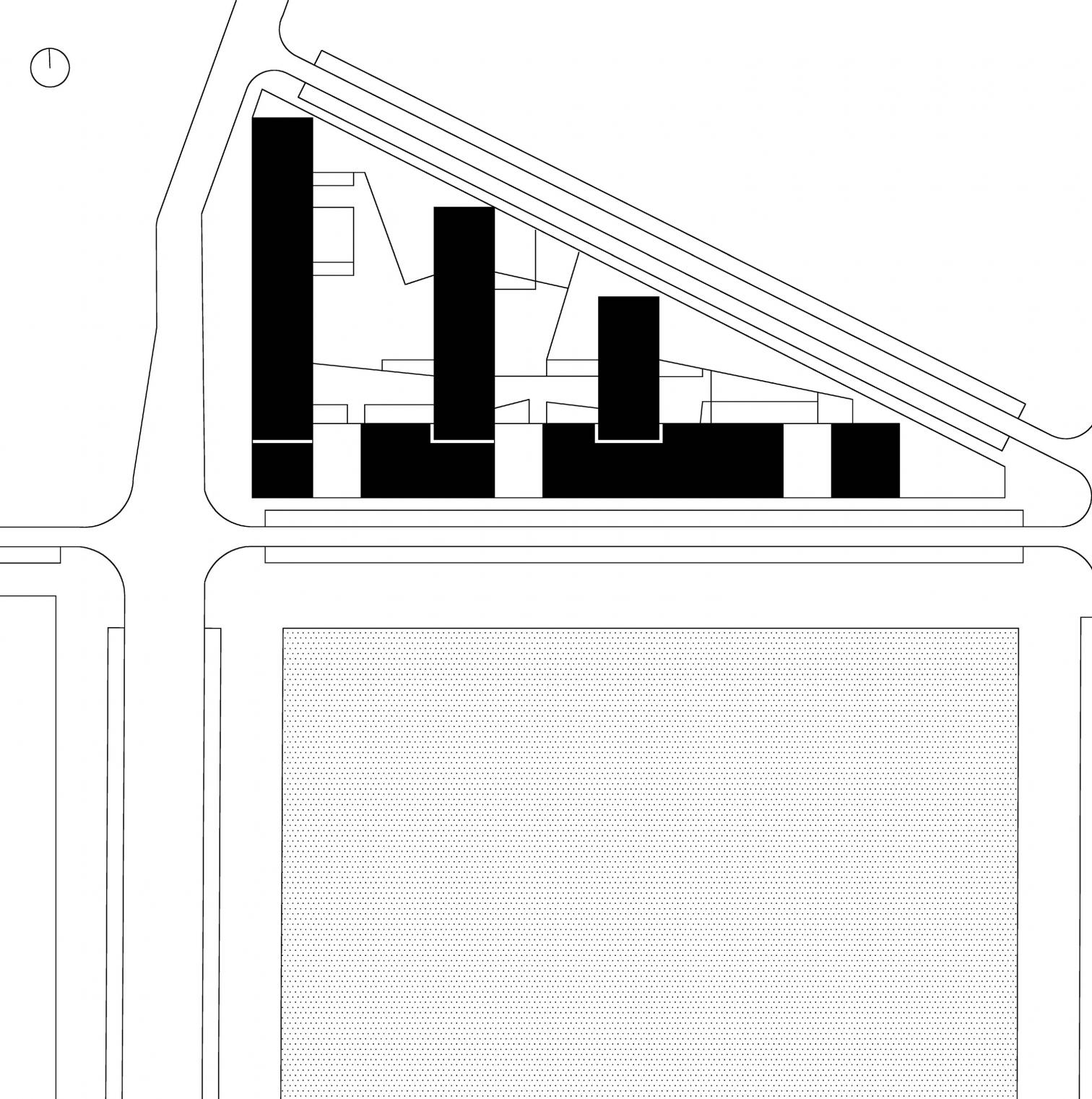 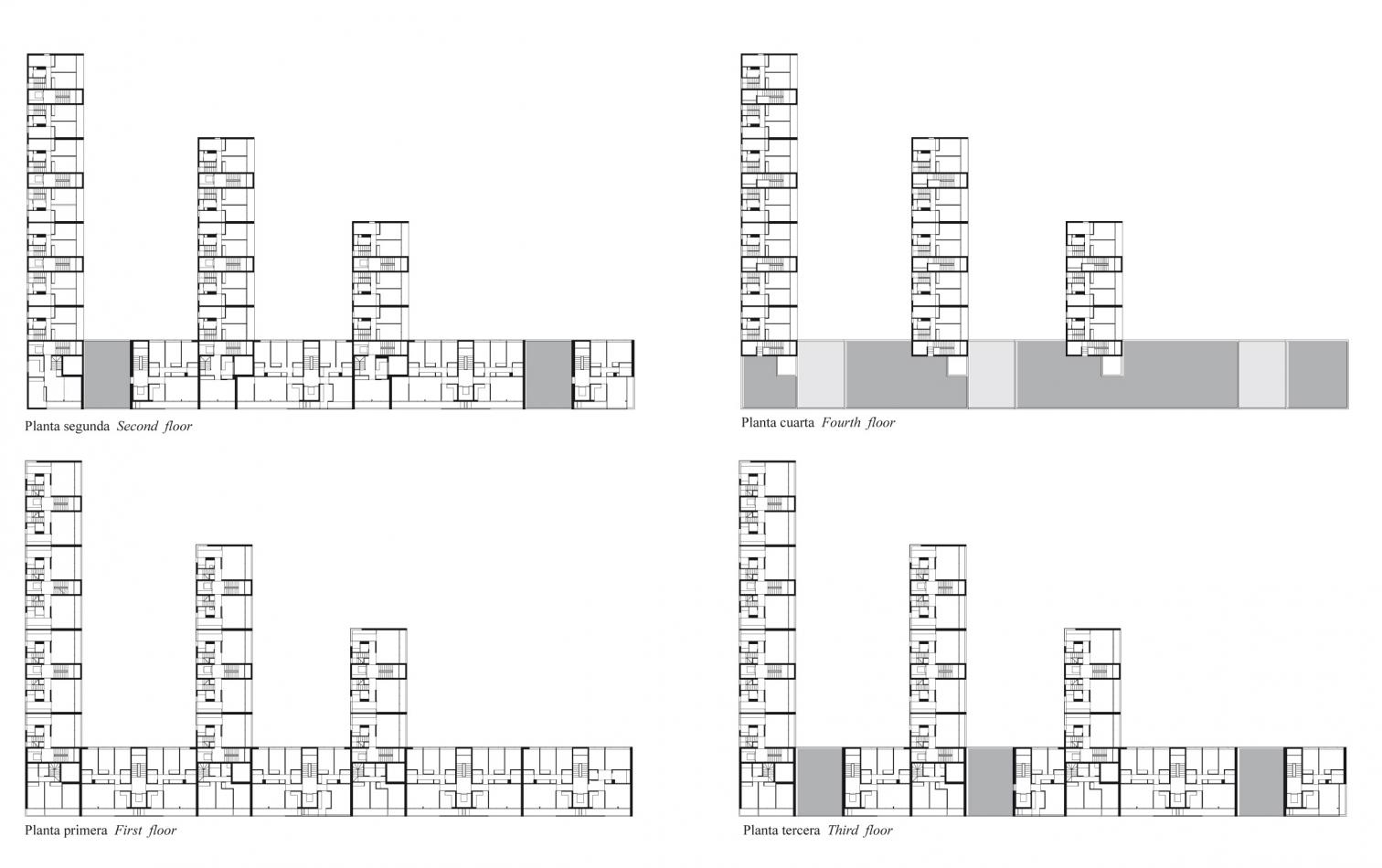 The organization of the volumes departs from the alignment of the assigned plot. The adopted solution manages to generate semiprivate courtyards, drawn up as secluded spaces but in contact with the city at the same time.

On the other hand there is a second characteristic, even more important, which is the presence in the southern side of a new urban park that descends practically all the way down to the edges of the M-40. In a dense environment this aspect gives the building a unique character.

Both in its organization and in its scale the project is determined by the features of its context, and this is clear in the organization of the volumes. Thus, one block moves up to the edges of the plot and three more are placed perpendicular to the first. The interior has been designed in accordance with two dwelling types that address the specifications of the program. 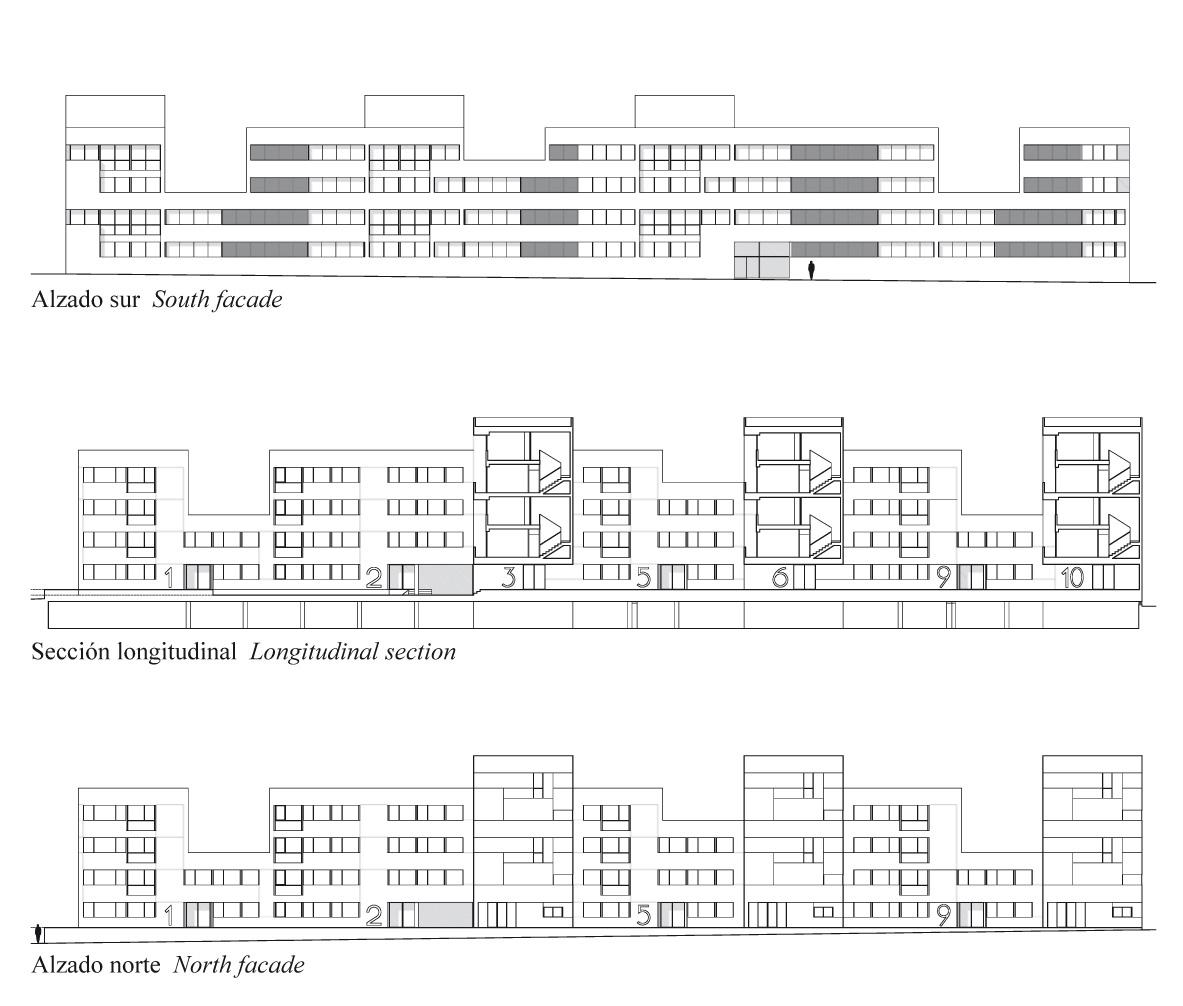 The block along the edge of the plot contains a dwelling type with a bay measuring 11,40 meters, organized around a central backbone that contains the services. With a clear and orderly modulation of the structure, this distribution separates the bedroom areas, oriented towards the north, facing the interior garden, from the kitchen and the living room, which takes up most of the surface. 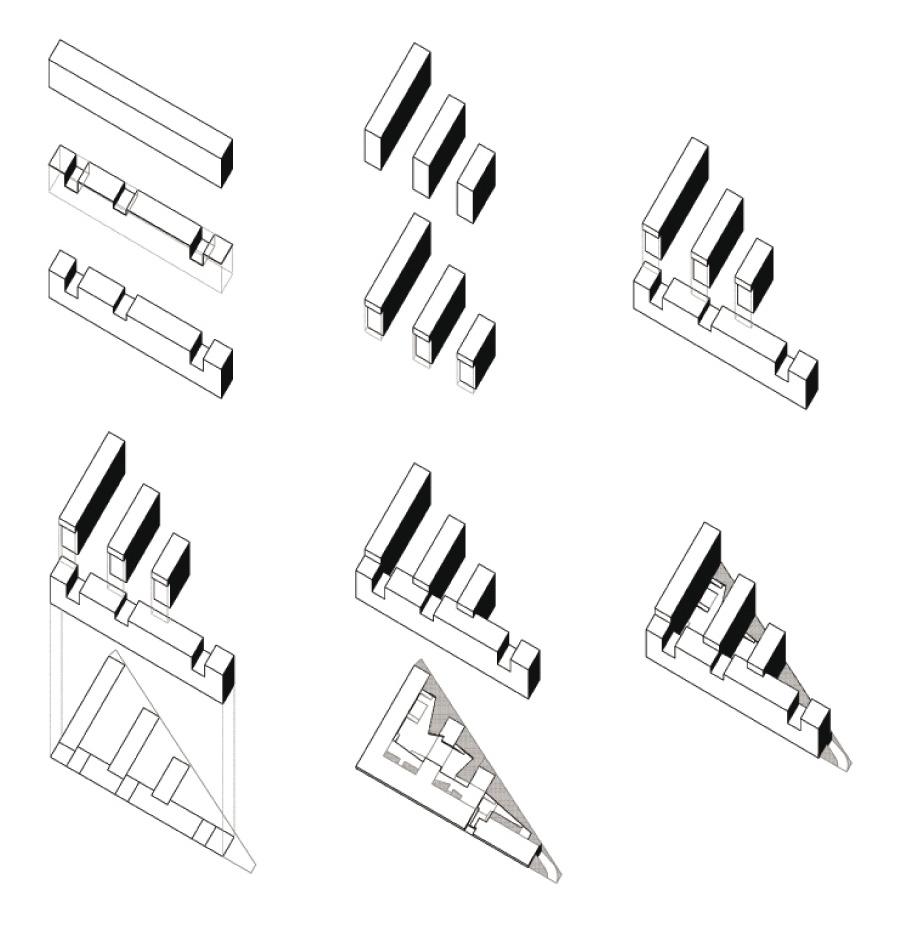 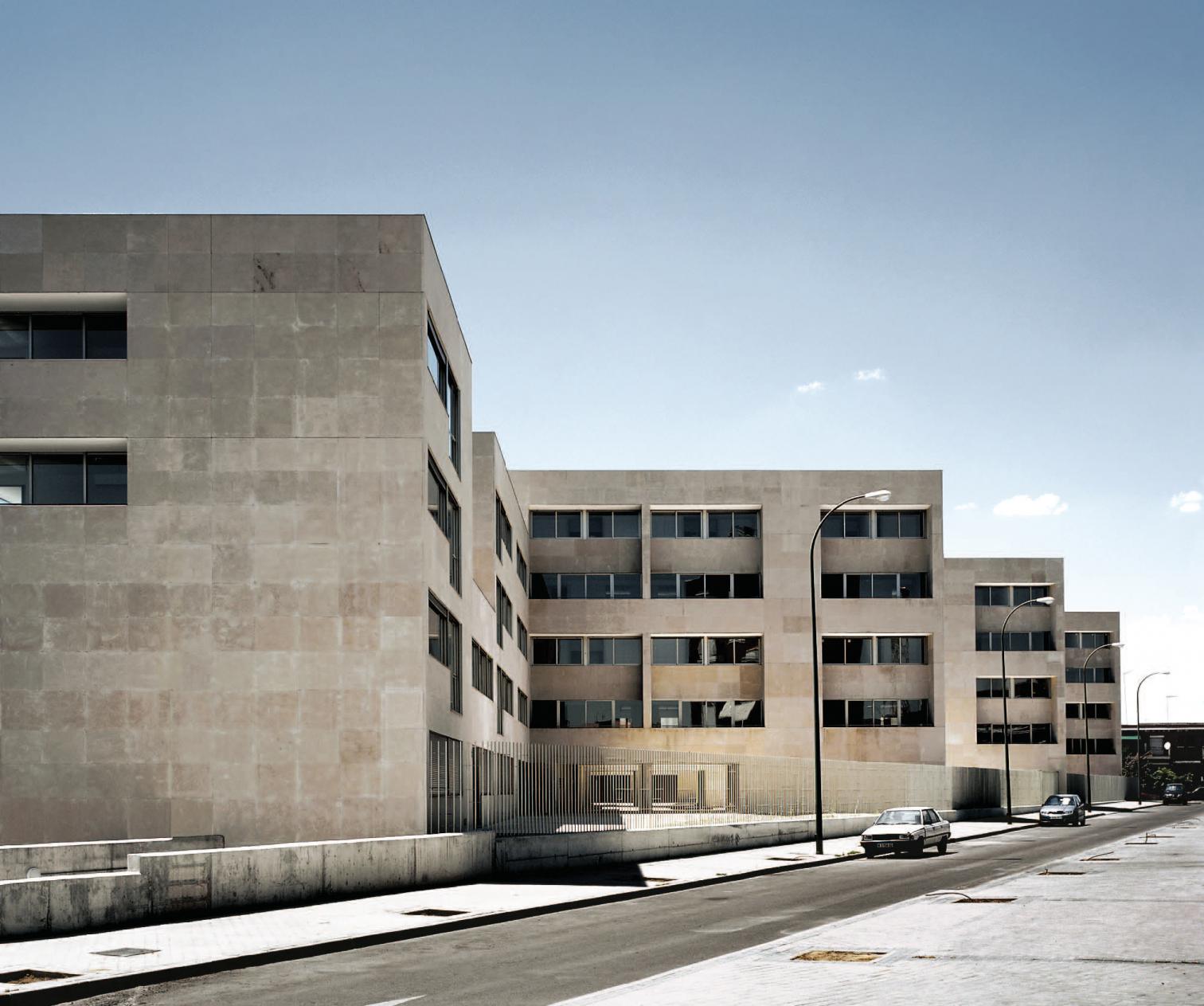 On this side the internal glazed skin that covers the block along its more public facade is set back. With this gesture it is possible to generate terraces open to the park, the views and the south. The opposite facade has been designed to facilitate the union or separation of the bedrooms, thereby highlighting the versatile character of the dwelling and the possibility of changing its functions. 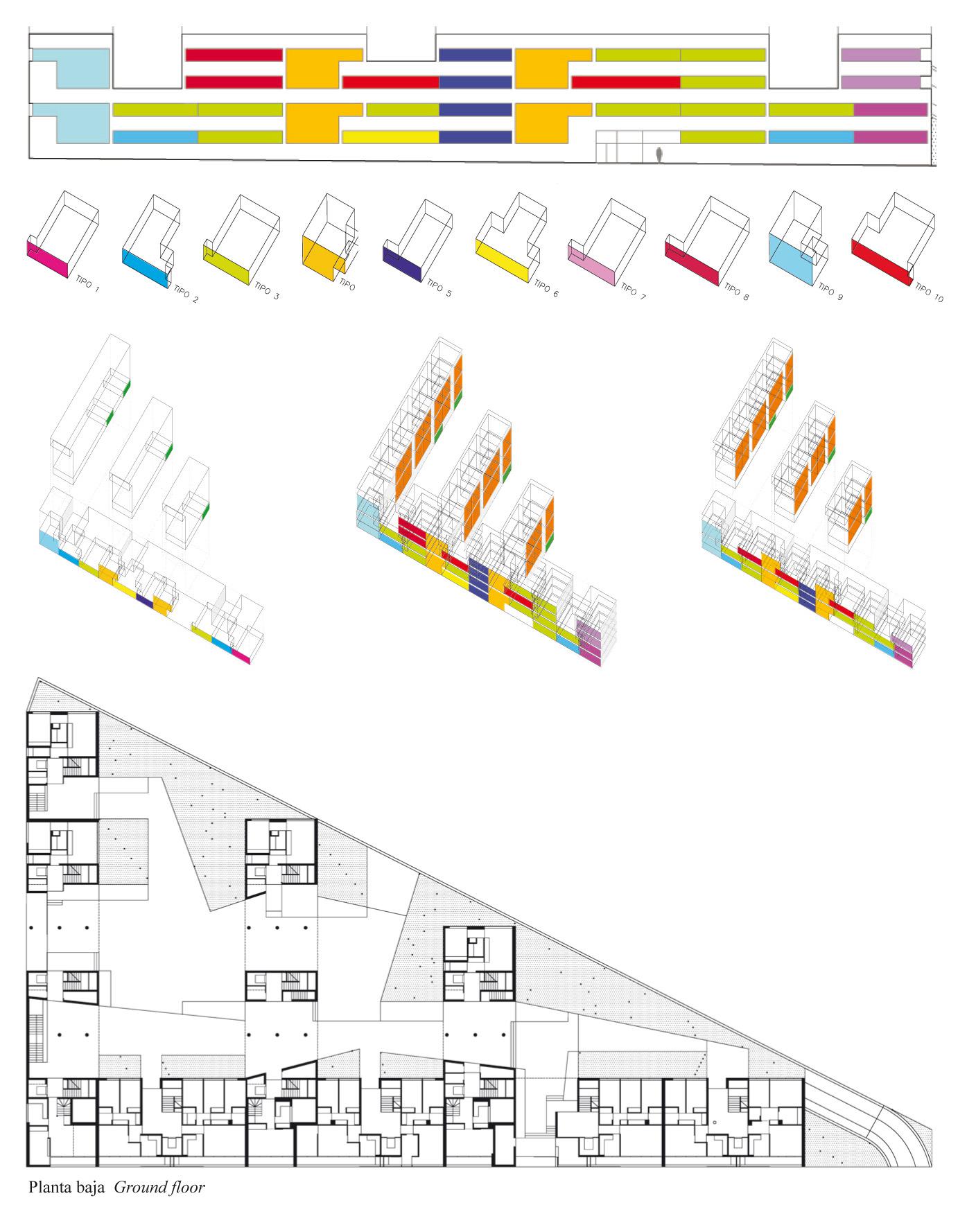 The transversal blocks have a bay measuring 9,30 meters, with duplex apartments in which the lower floor contains the kitchen and living area and the upper floor the bedrooms. In this case the dwellings come out into the landscaped spaces generated among dwellings, closing up to the western orientation and opening up to the east. 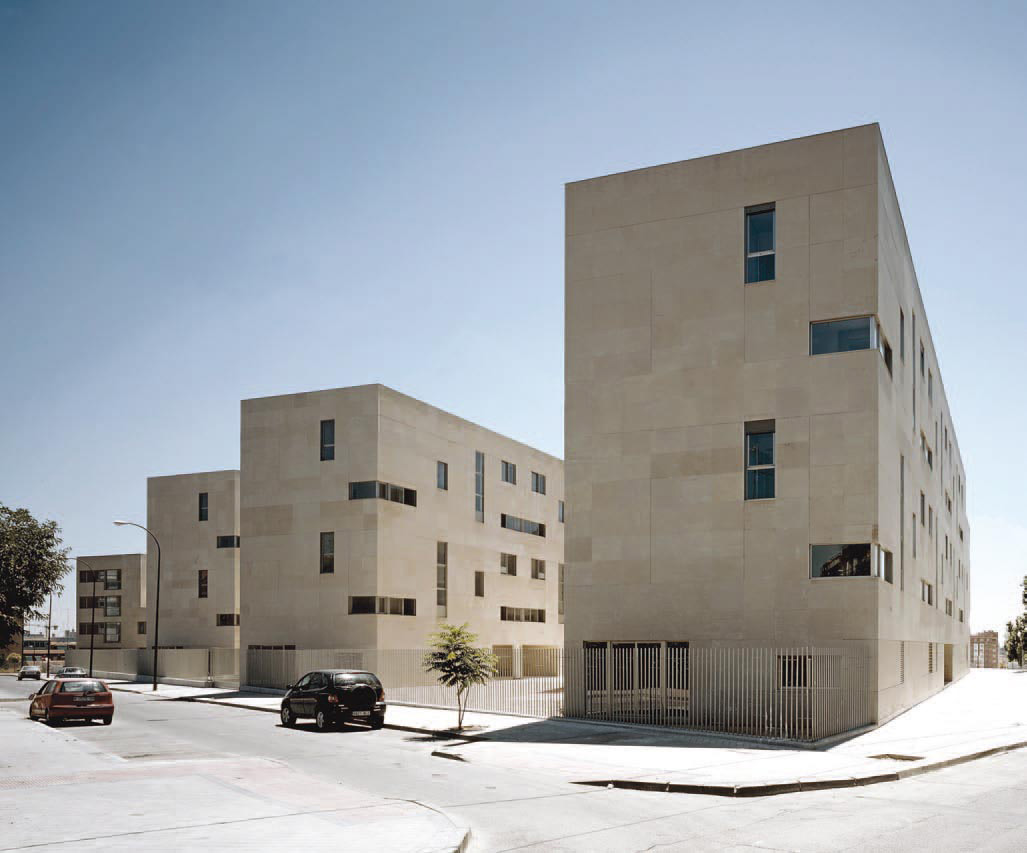 Sancho Madridejos   China   Gateway to the new quarter of Duolum, this modern forum of 480 meters in length is not just a building, but rather an urban project in itself. Designed as a unitary volume, the complex is 9 meters above ground level and, after several shifts on the h

Sancho Madridejos   Spain   In recent years Madrid has undergone notable growth along its entire eastern front. Perhaps affected by this, San Fernando de Henares is experiencing an unprecedented impulse in terms of municipal activity. As a symbol of such takeoff, the authoritie

Sancho Madridejos   Spain   Located on the road that joins Ciudad Real and Picón – a small municipality of 675 inhabitants that is 13 kilometers northwest of the city –, the plot where the winery rises, in the northern part of the site, has a seven meter drop between the top an

Sancho Madridejos   China   From the shore of the canal that structures the thousand-year-old city of Qingpu one can see a church that acts as a luminous landmark in the distance. Its light and translucent origami-like appearance is underscored by the presence of a layer of wat

Sancho Madridejos   Spain   Within the typical landscape of hills covered in holm and cork oak, a 5000 hectare dry plot of land in the province of Ciudad Real had to be provided with the necessary facilities to exploit its extensive forest, host occasional huntings and serve as

Sancho Madridejos   Spain   The proposal takes the river’s edge as reference and proposes a promenade in continuity with the interiors of the building, which is attached to the existing medians tracing a curve. The key point is the covered atrium that links the park and the ave

A Perforated ACM Apple in Carabanchel