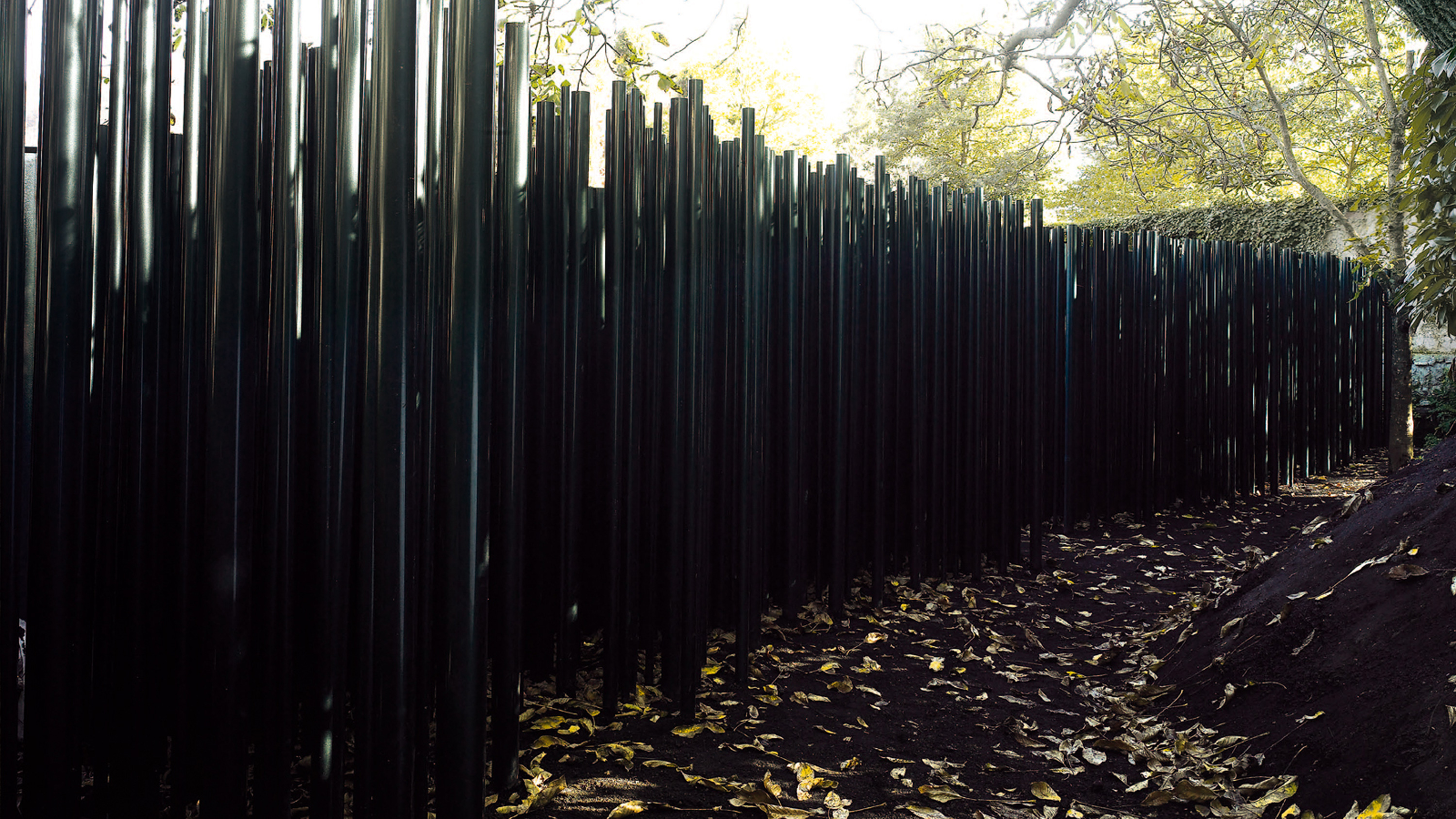 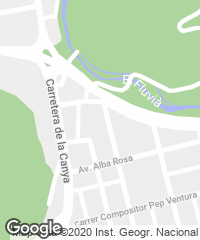 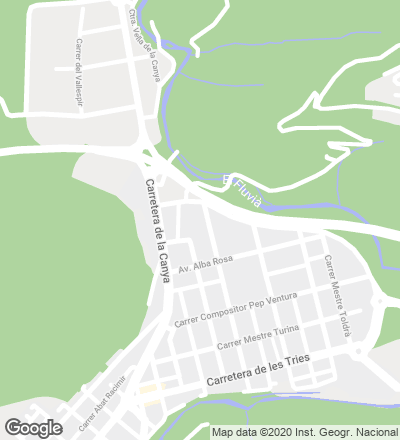 If the restaurant Les Cols already served as an example of how glass and steel can transform the interior of an old farmhouse into a chimeric space, somewhere between the rural world and cosmopolitan sophistication, the project for the construction on the same plot of five hotel-pavilions takes a similar conceptual line as starting point. 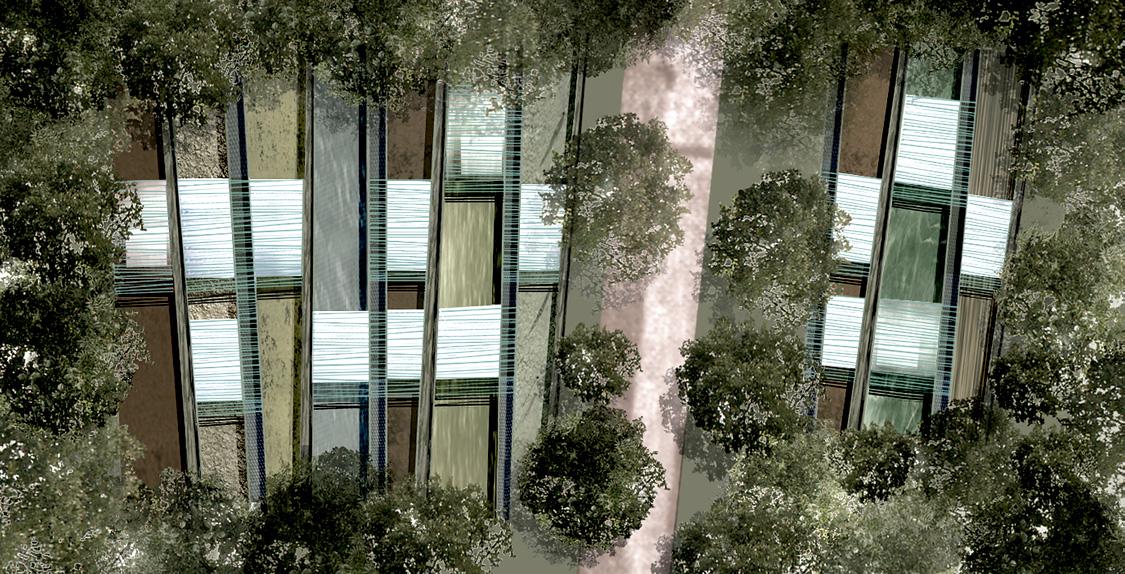 In this case it is the pure forms, the superimposed textures and the markedly abstract spaces that set up a serene dialogue with nature, managing to offer an avant-garde shelter in which to relax and rest, not necessarily from an intense travel schedule, but from a lifestyle.. 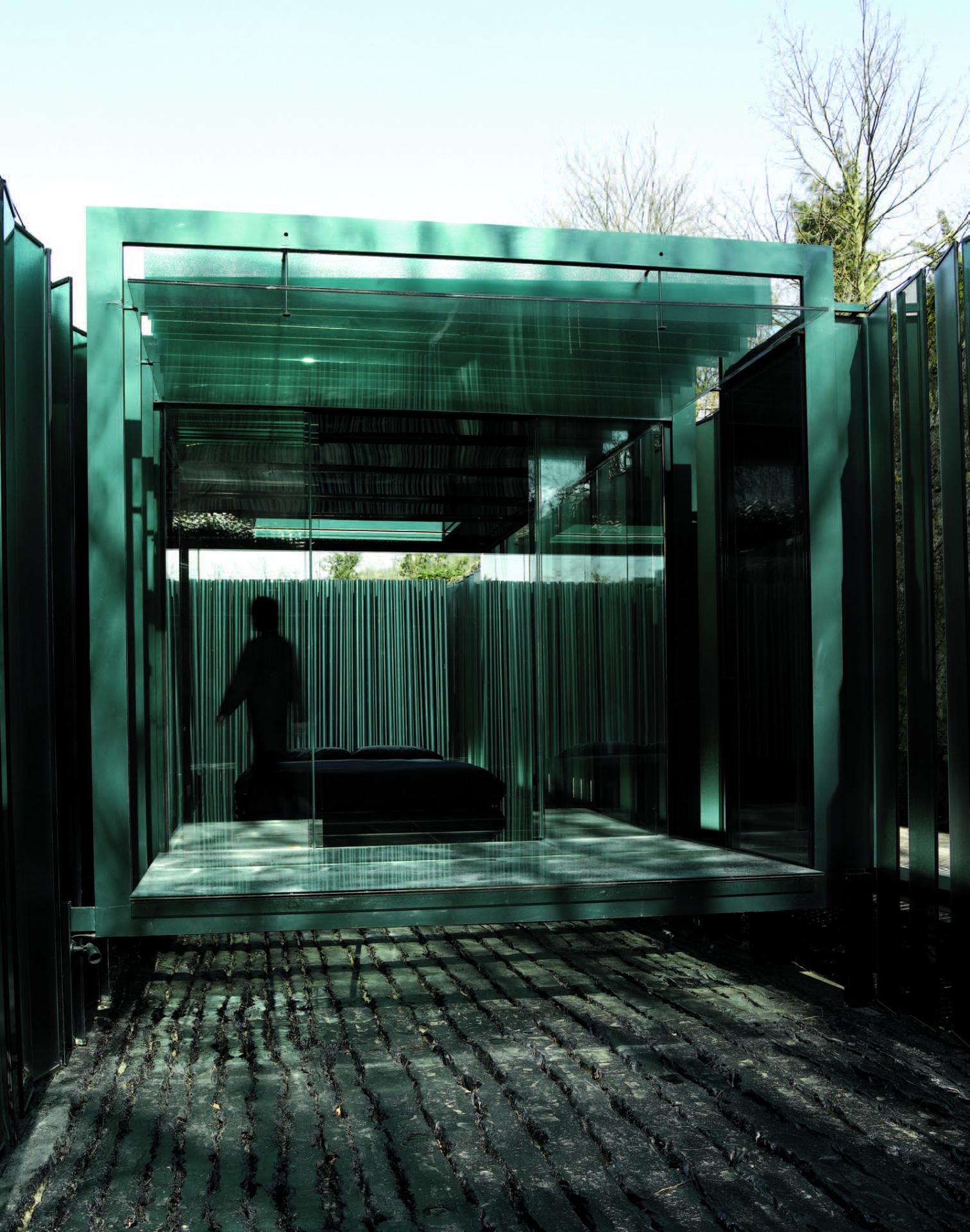 Located next to one of the stone walls that trace the perimeter of the site, the organization of the new building draws inspiration from the structure of vegetable gardens. The complex is surrounded by green steel canes that perform as a sort of fence or hedge. Glass surfaces of emerald green measuring 30 centimeters thick and three meters high are aligned rotating one with respect to the other, forming a zigzagging ‘vegetal wall’ flanked on either side by land strips of different width. The boxes of rooms are tucked into the wider strips and the corridors into the narrower ones. The circulation through these narrow paths tightly contained within tall glass walls invites to gaze into the sky, which becomes one of the main parts of the project. 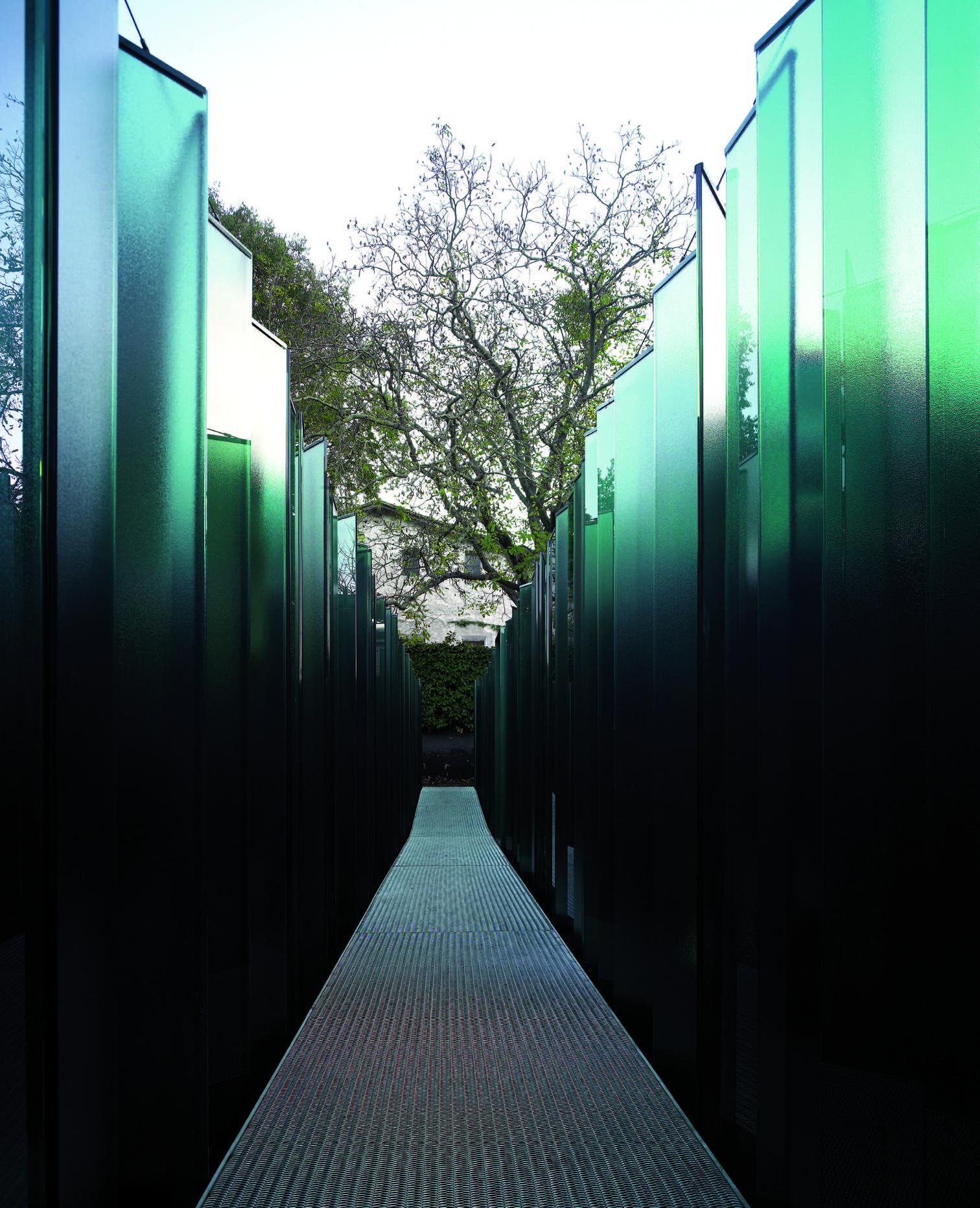 Everything in the rooms – floor, walls and ceiling – is transparent, once again turning the sky into the prominent element of the project. There are no furniture pieces, only a green mat of strips through which light comes in and that can be used as a sofa or table, or as a bed even. 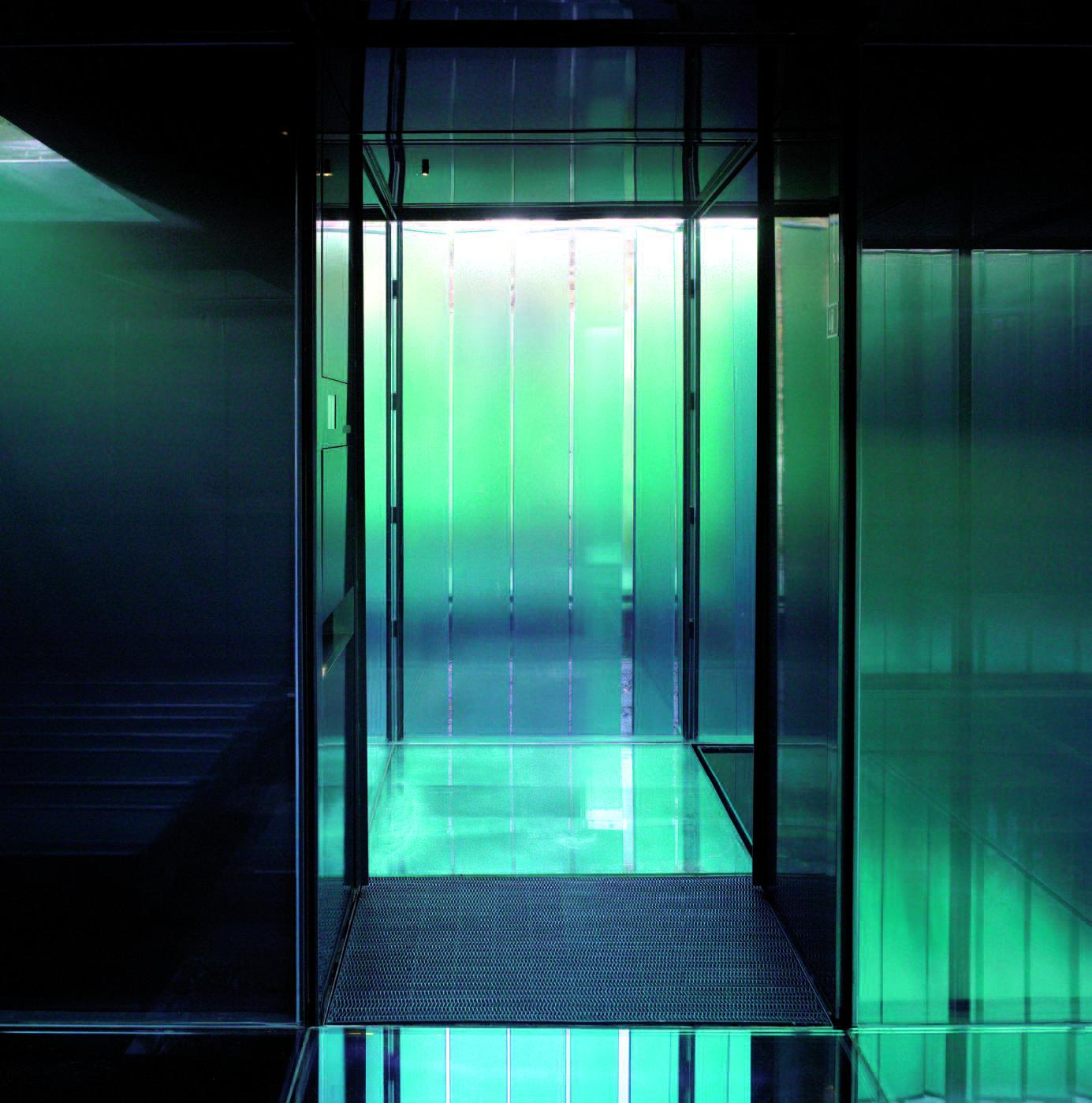 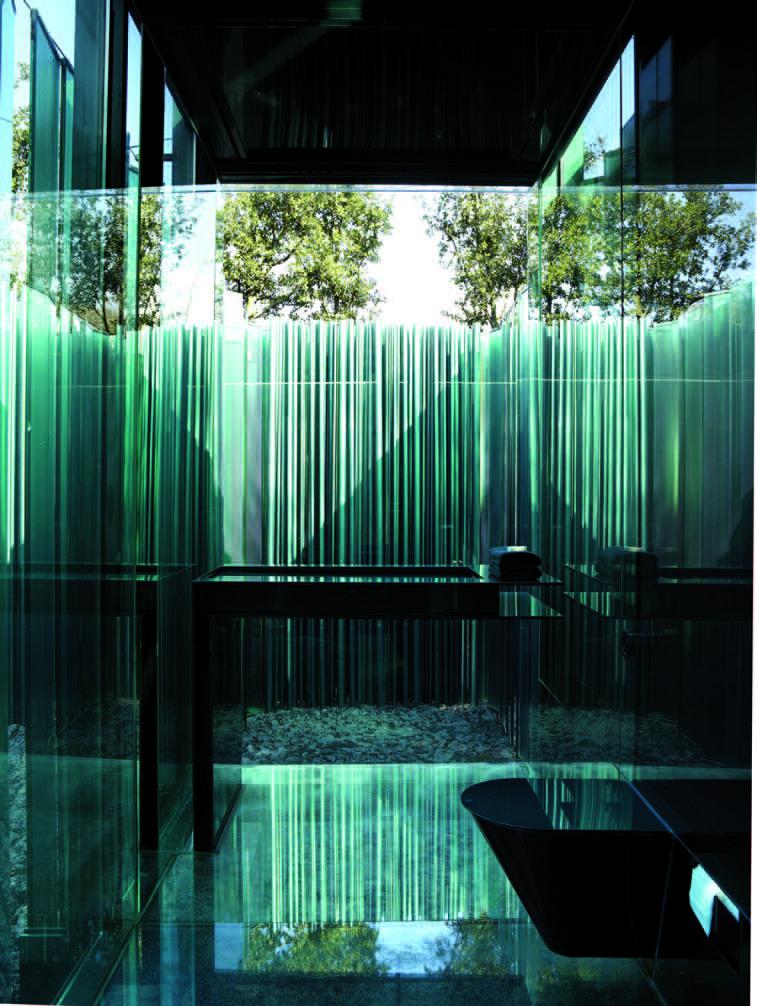 In the bedrooms there is only a green mat of strips that serves both as sofa and as table, and that becomes a bed. The bathroom has a washbowl through which water flows and a deep bathtub filled with river stones.

The pavements of metal grille in the corridors and of glass in the rooms hover over a bulky black floor that imitates the forms of volcanic lava in movement, a reference to the unique landscape of the neighboring region of La Garrotxa, full of extinct volcanoes. Here the true luxury is nature, its calm and in-depth appreciation. 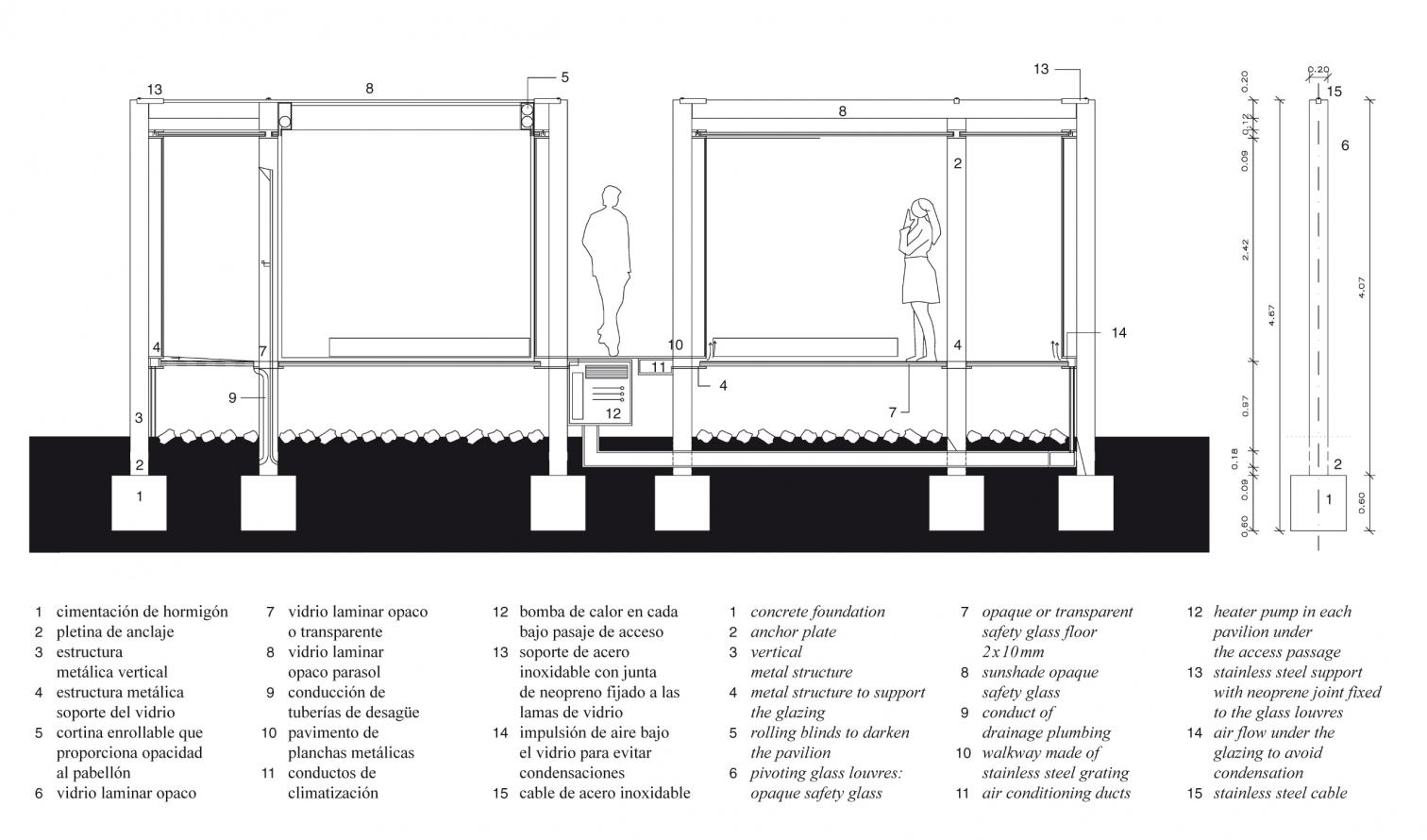 The only visible sophisticated element is a control panel for lighting, air cooling and heating and shutters that darken these crystalline cubes at nighttime. In the bathrooms there are no sinks but washbowls in which the flow of water is controlled by sensors, while the bathtubs filled with river stones evoke the freshness of streams. The objective is to create dematerialized spaces built only with light, color, transparencies and reflections; spaces in which nature, abstract or real, is the principal element. 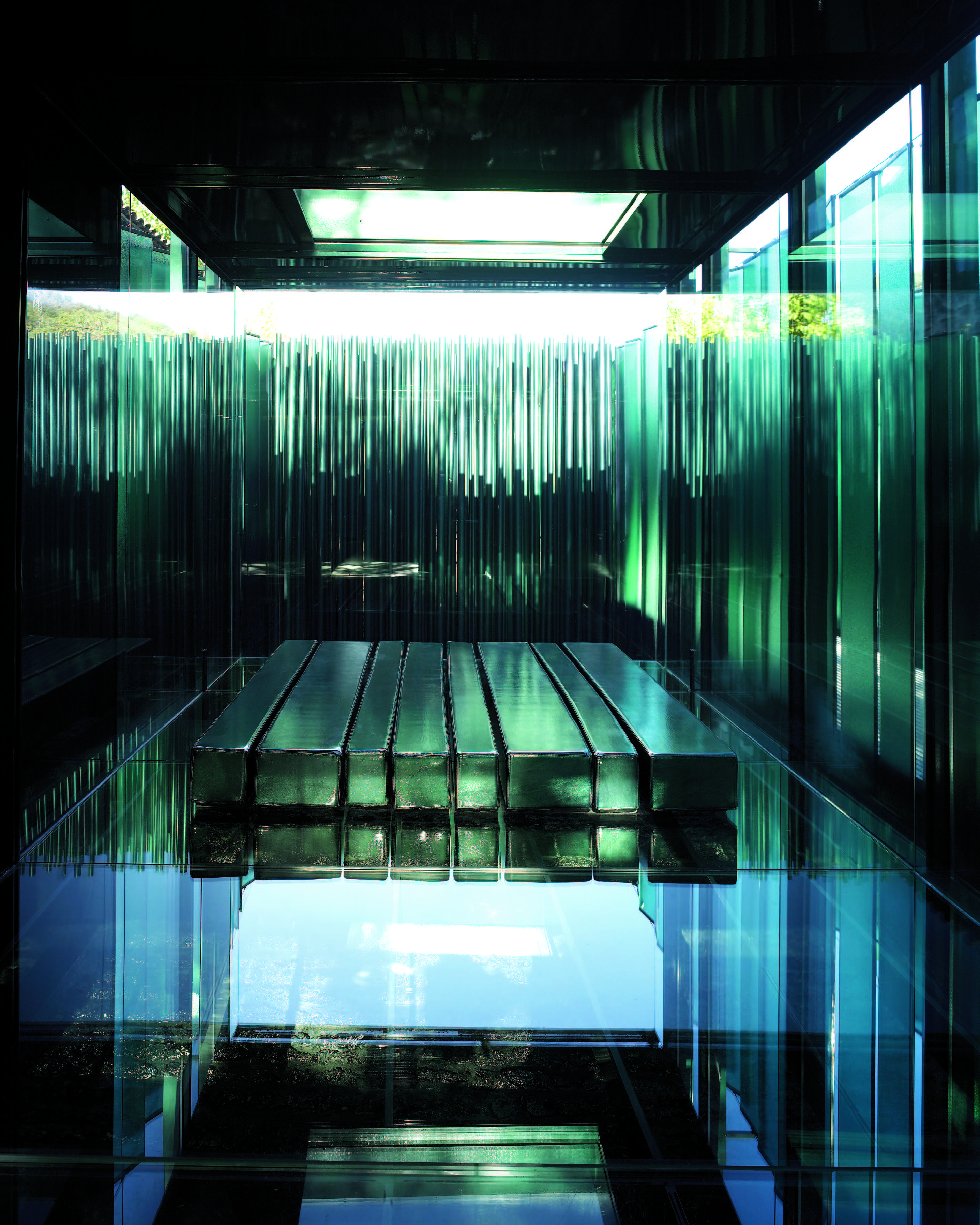 RCR Arquitectes   Spain   The project stems from the desire to build a swimming pool in a markedly rural context, on a site where different types of traditional structures – a farm, granaries and a mill – stand side by side. The specific characteristics of the place end up t

RCR Arquitectes   France   Located in Lormont, in the metropolitan area of Bordeaux, the estate where this project goes up includes a large garden with tall trees and the Bois Fleuri manor house, a structure in the style of the small châteaux dotting the French countryside. Th

RCR Arquitectes   France   The Brazza area, north of Bordeaux, comprises old industrial terrains between the train tracks and the Garonne River, an area that is now undergoing an urban renewal process. The project, on a corner across from the train tracks, proposes a program o

House for a Hairdresser, La Canya

RCR Arquitectes   Spain   Standing at  a bend of the road that connects Camprodón with Olot, the town of La Canya is growing in residential developments that are not very different to those surrounding great cities. But due to its location in this rural region within the prov

Library and Center for the Elderly, Barcelona

RCR Arquitectes   Spain   This mixed-use structure is included in the plan – promoted by the City Council – for the recovery of the interiors of the urban blocks of the Ensanche of Cerdá in Barcelona, and goes up in the last plot available on Conde Borrell street, in the San

House for an Architect, Gante

RCR Arquitectes   Belgium   The project for this single-family house in the city of Ghent was chosen in a private competition called by the future owner, also an architect, who invited three teams to submit proposals. The site assigned is in the interior of an urban block, surr

RCR Arquitectes Joan Puigcorbé   Spain   IN THE TOWN of Ripoll (Gerona) a core-ten steel  enclosure has transformed an empty plot amid party walls, once occupied by a theater that has been demolished, into a new public facility that acts as a plaza, bridge and gate of access to the historic

RCR Arquitectes   Spain   An old and walled in farmhouse was the place chosen for a new restaurant, with a design that combines metaphors of the rural and the culinary world. Three warehouses placed along a basilica-type floor plan have undergone a meticulous refurbishment, b

RCR Arquitectes   Spain   In a sports complex in Taradell, a small town in the province of Barcelona, the site of this indoor swimming pool and the precipitous terrain determine its configuration, articulated in four parts: the outdoor tracks, the wall, the services building,

RCR Arquitectes   Spain   Immerse in one of the exceptional natural spots common to the province of Gerona, the town of Olot is particularly careful when it comes to its expansion on the surrounding areas in order to avoid destroying on its growth that which constitutes one

RCR Arquitectes   France   Devoted to the history and art of the region, the Museum of Lorraine takes up a historical complex in the heart of the city of Nancy, comprising the buildings next to the Palace of the Dukes of Lorraine – a magnificent construction of the French Rena