The City, between Utopia and Catastrophe Digital version 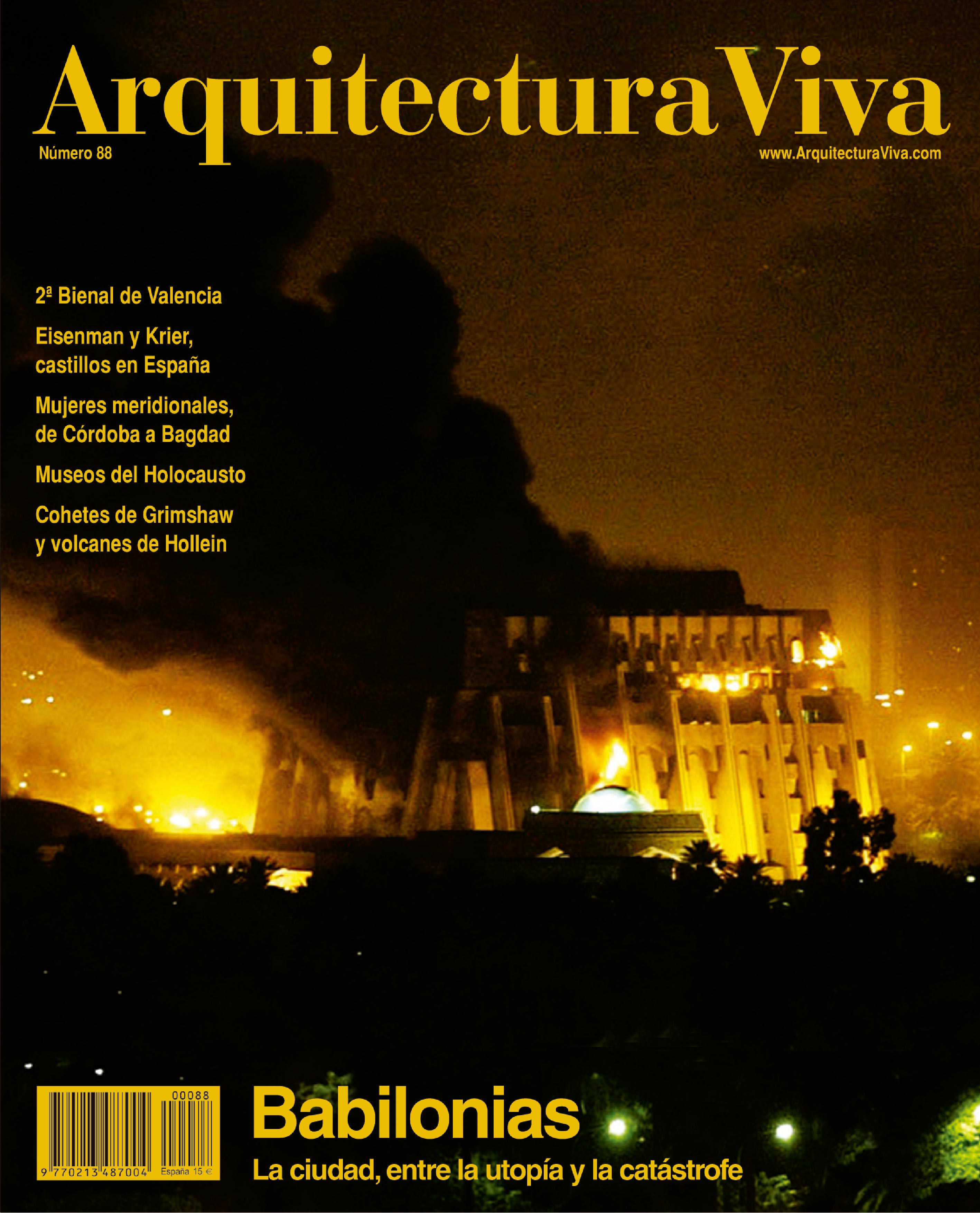 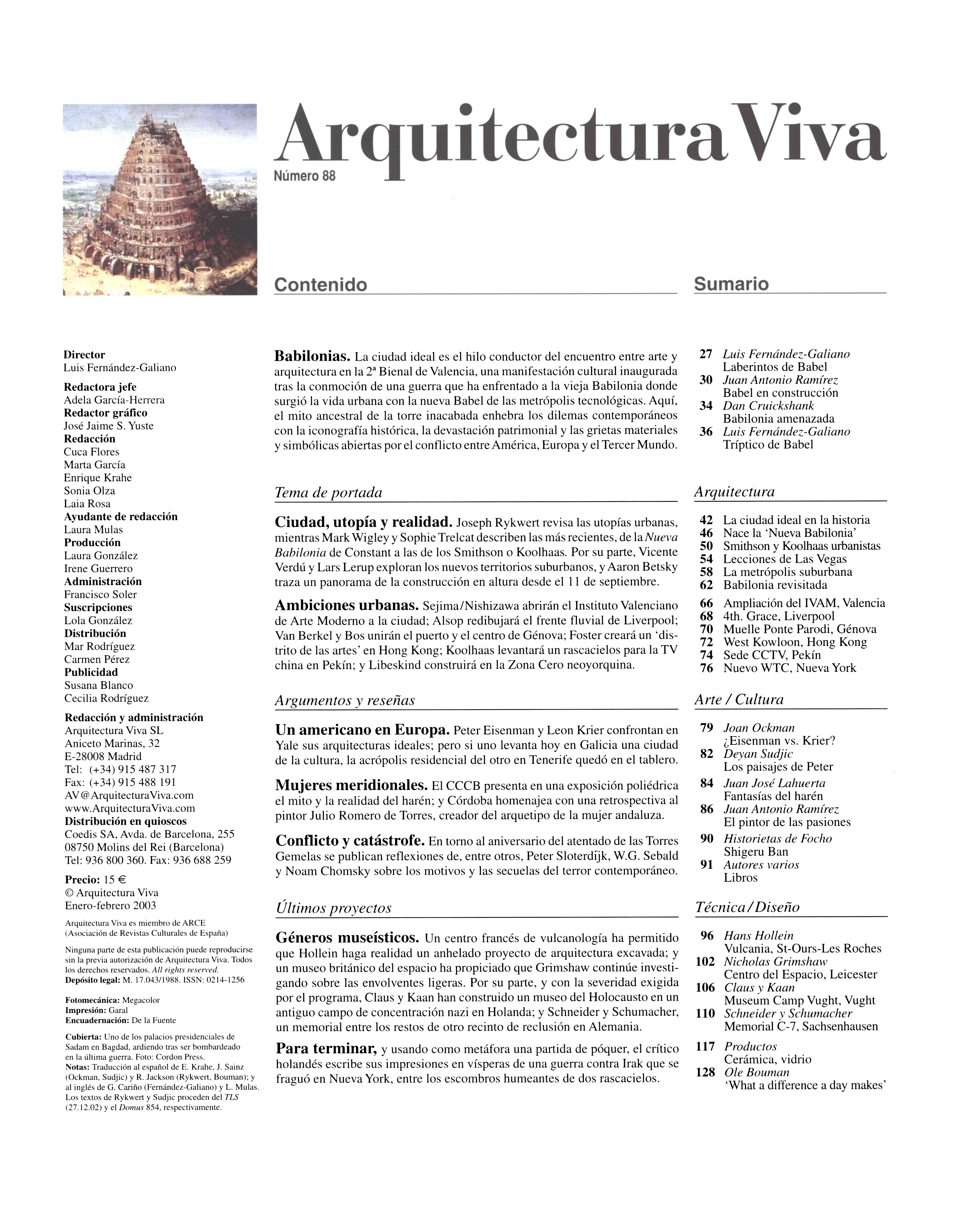 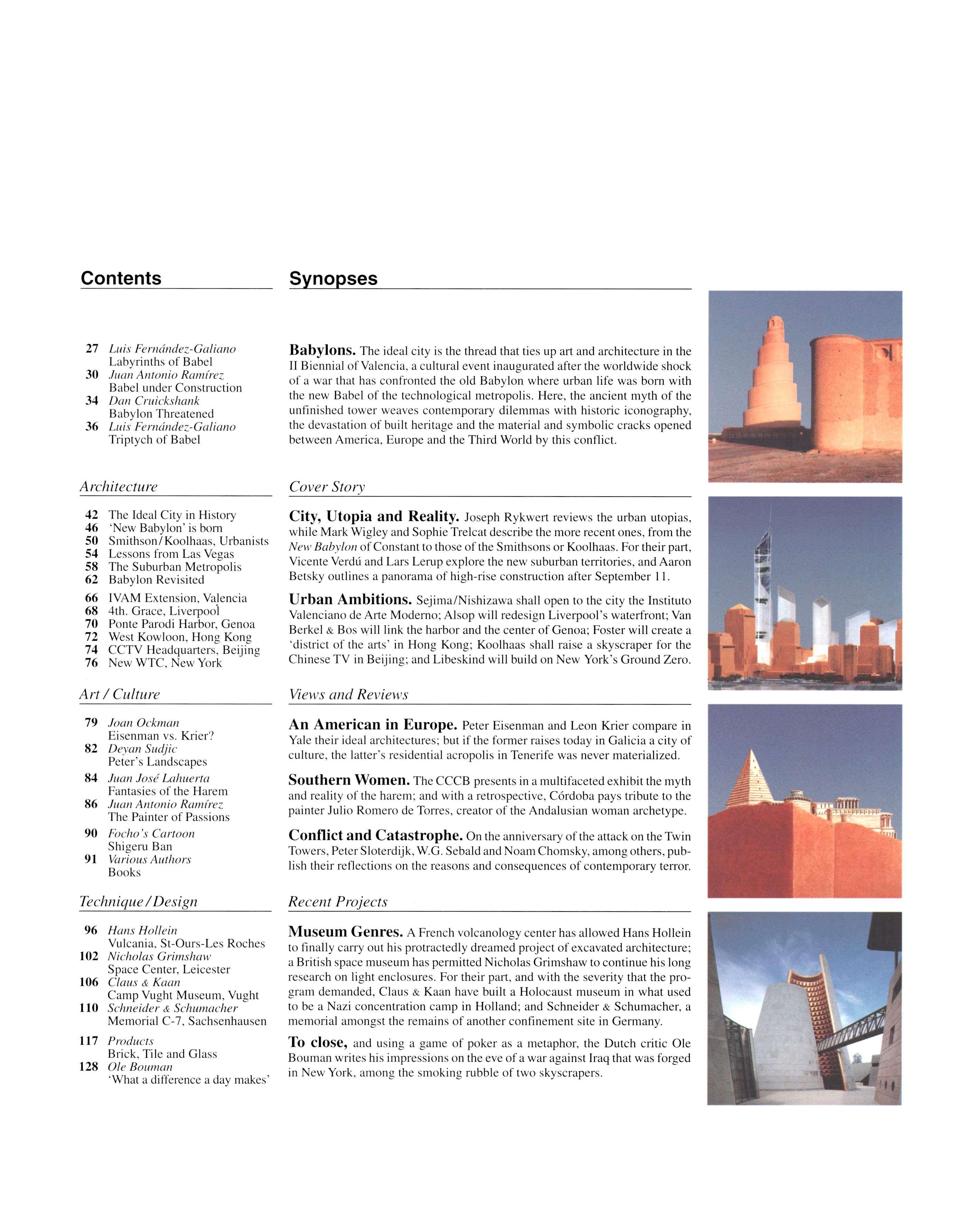 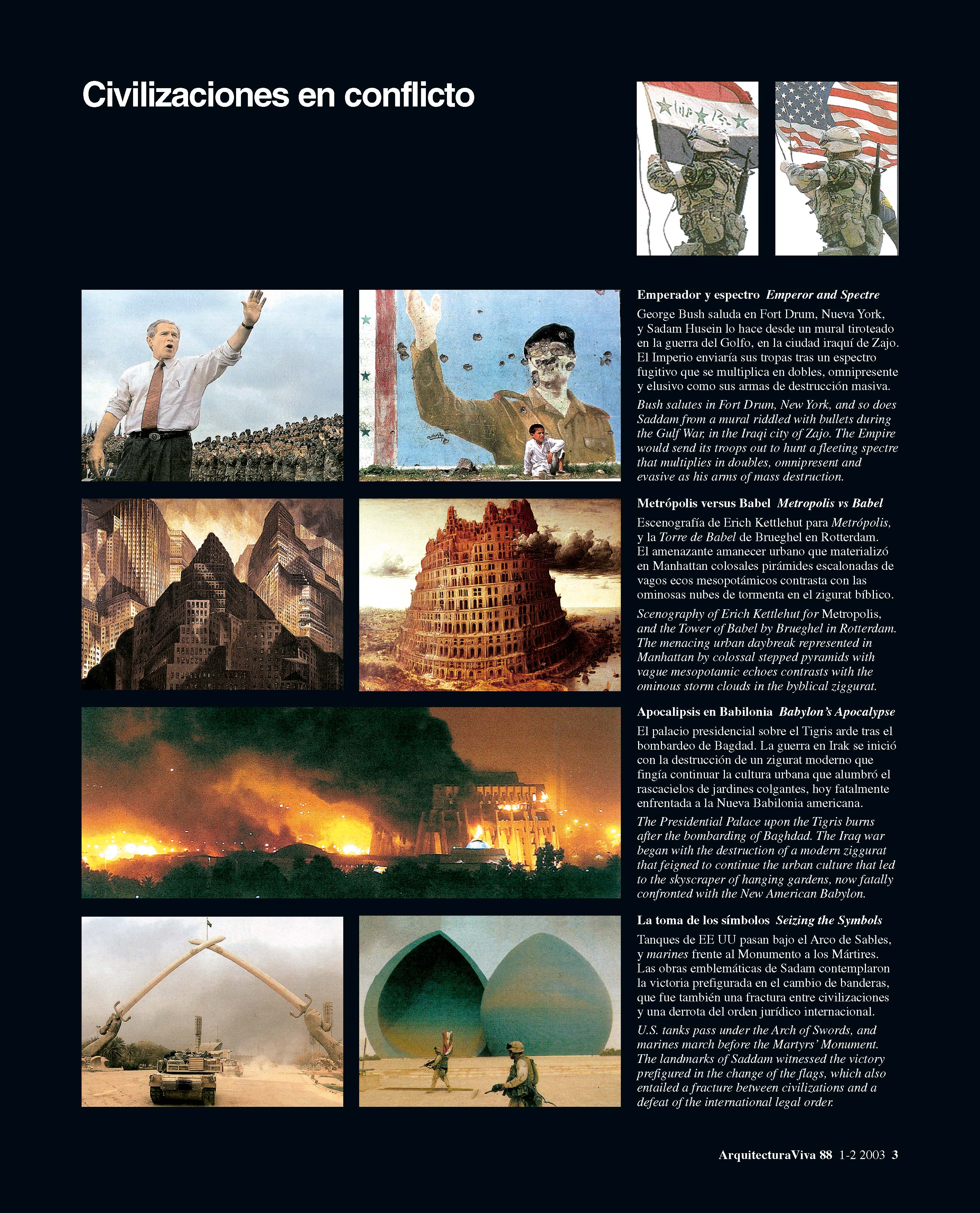 The City, between Utopia and Catastrophe Digital version

The City, between Utopia and Catastrophe 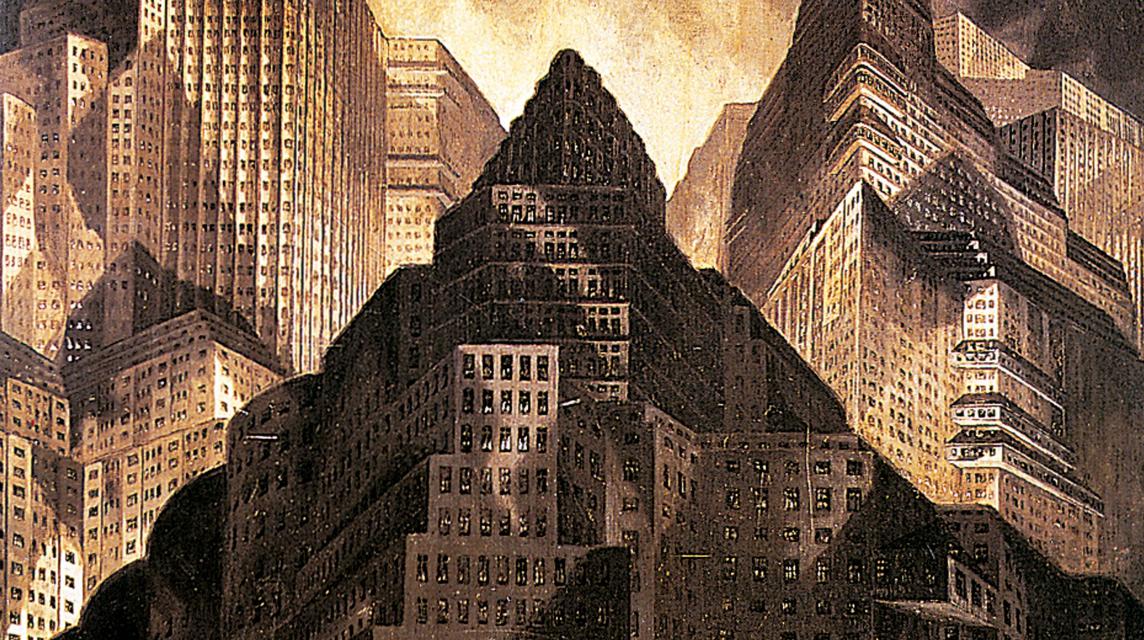 Emperor and Spectre Bush salutes in Fort Drum, New York, and so does Saddam from a mural riddled with bullets during the Gulf War, in the Iraqi city of Zajo. The Empire would send its troops out to hunt a fleeting spectre that multiplies in doubles, 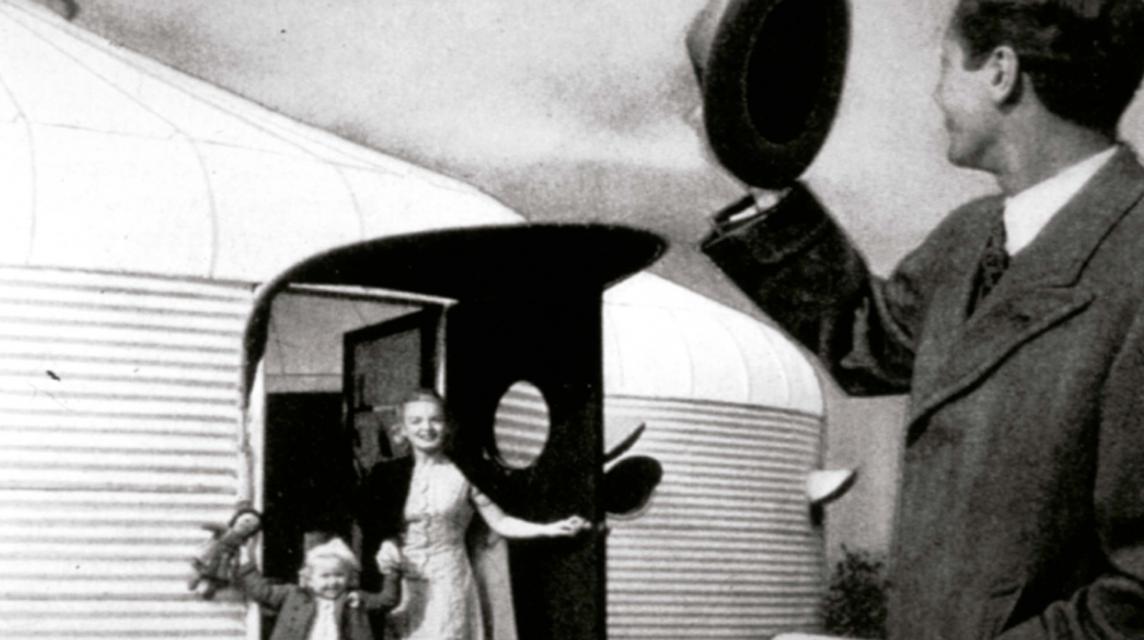 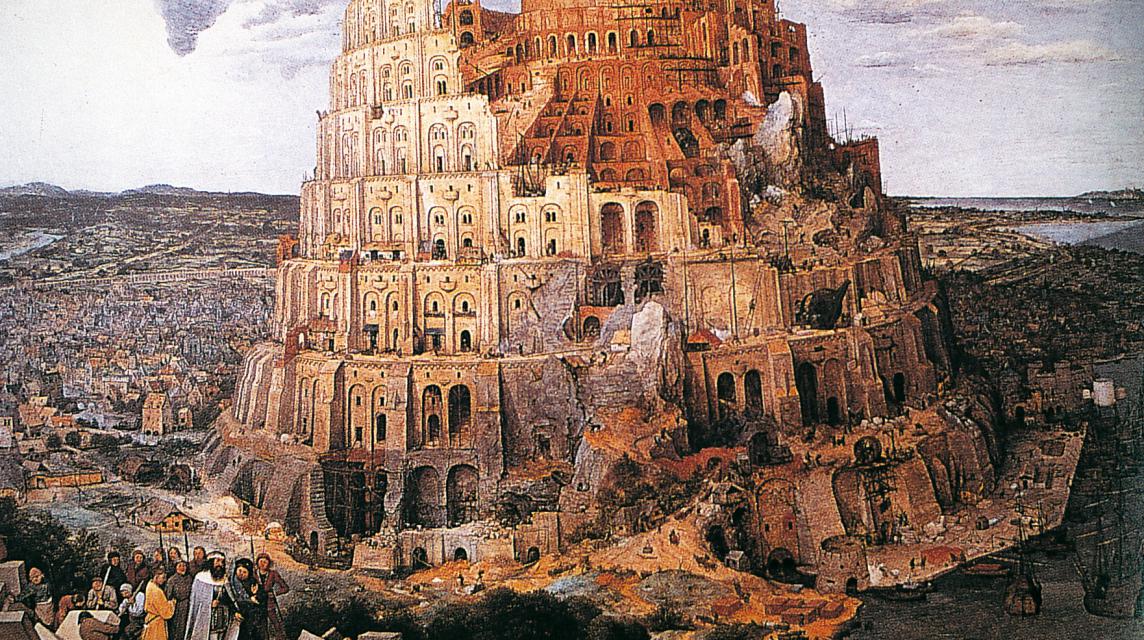 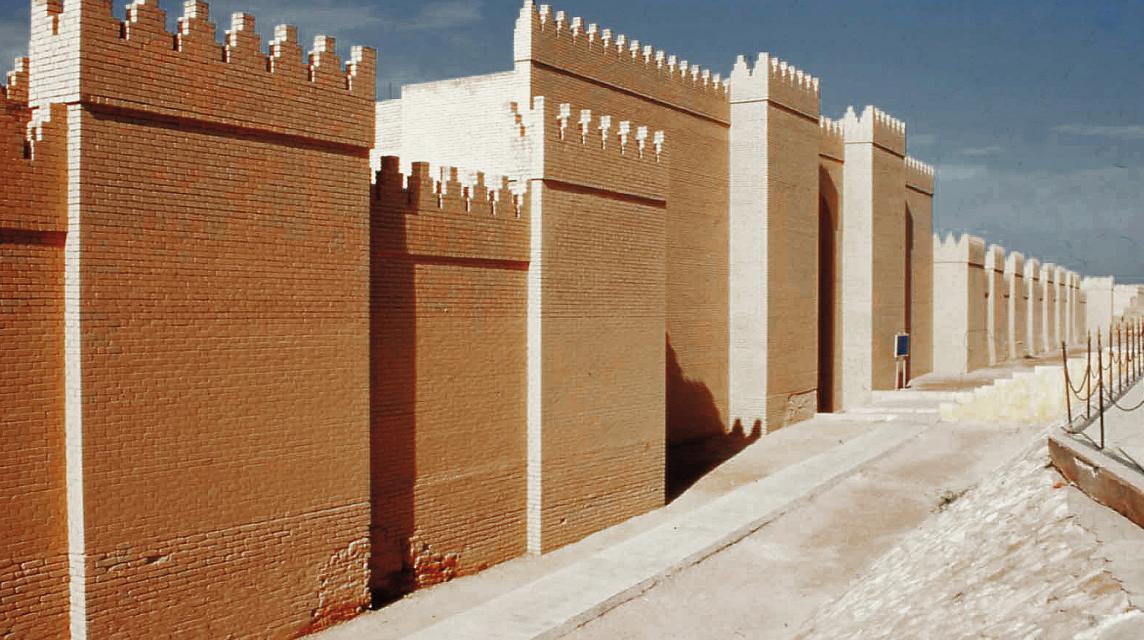 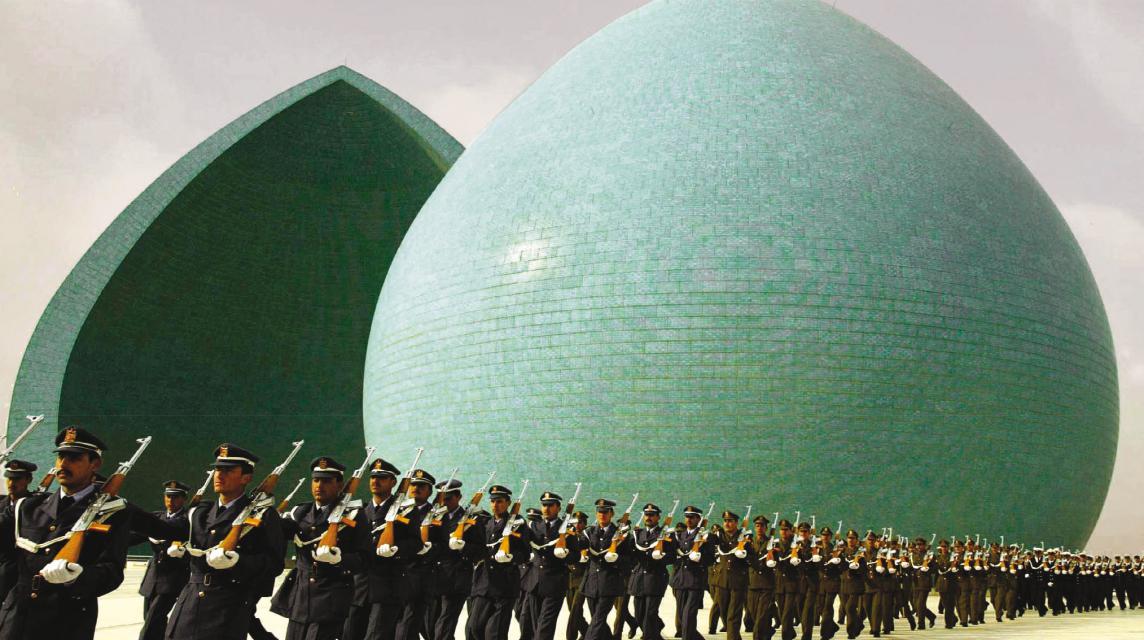 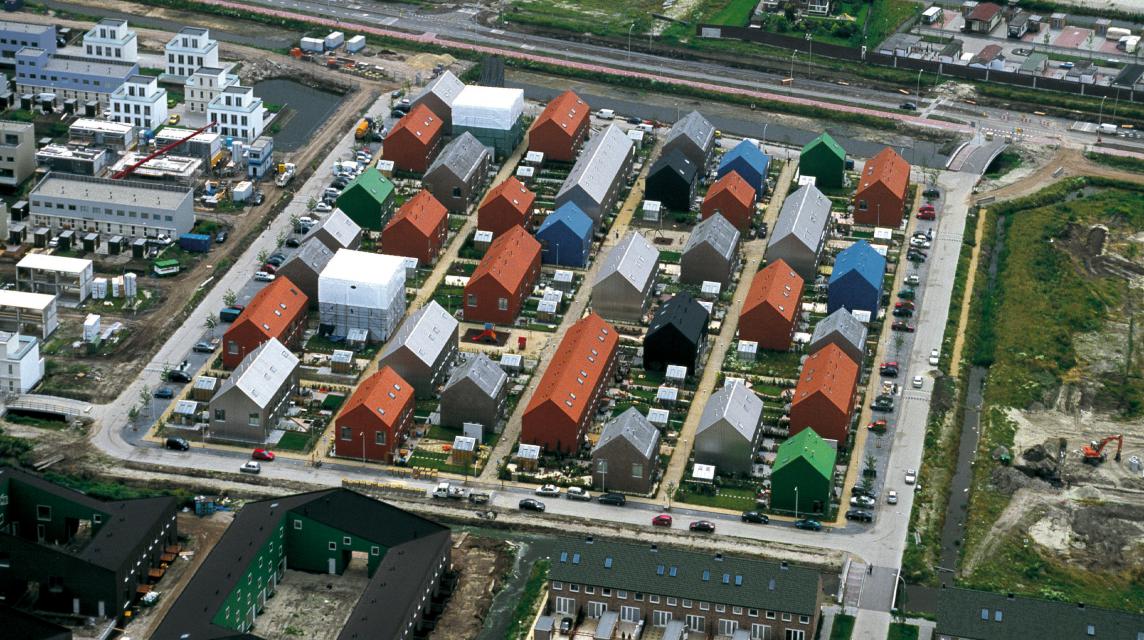 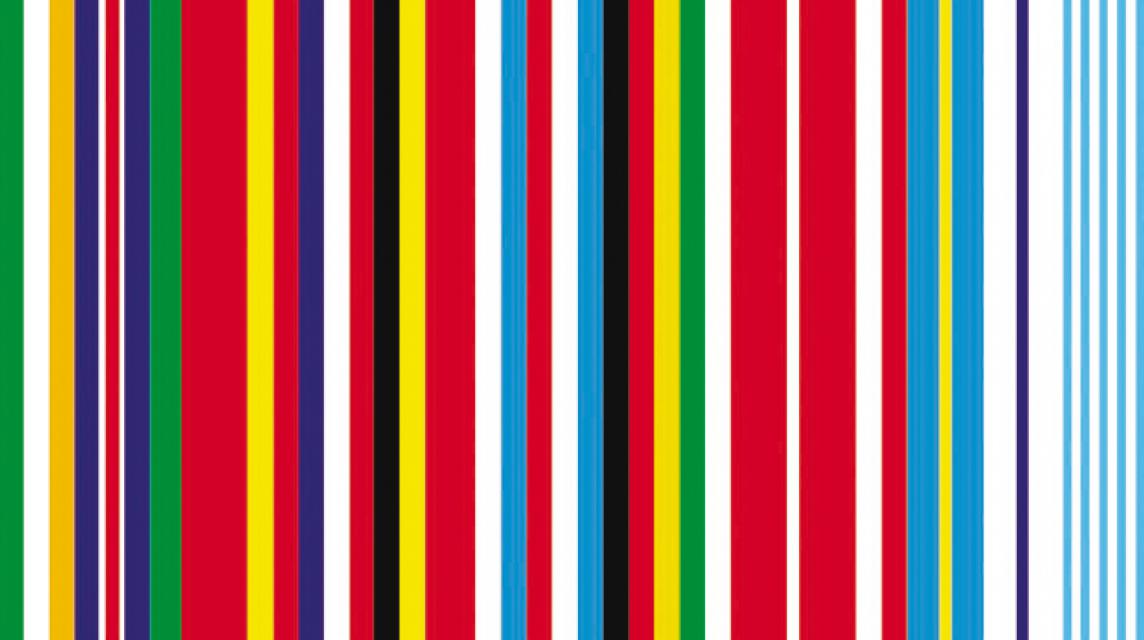 Asia on One Hand, Europe on the Other

Luis Fernández-Galiano   And New York in the distance. The results of the Ground Zero competition were announced on 27 February, and the next day The New York Times graciously divided its front page between a picture of an ecstatic Daniel Libeskind beside the model of his pr 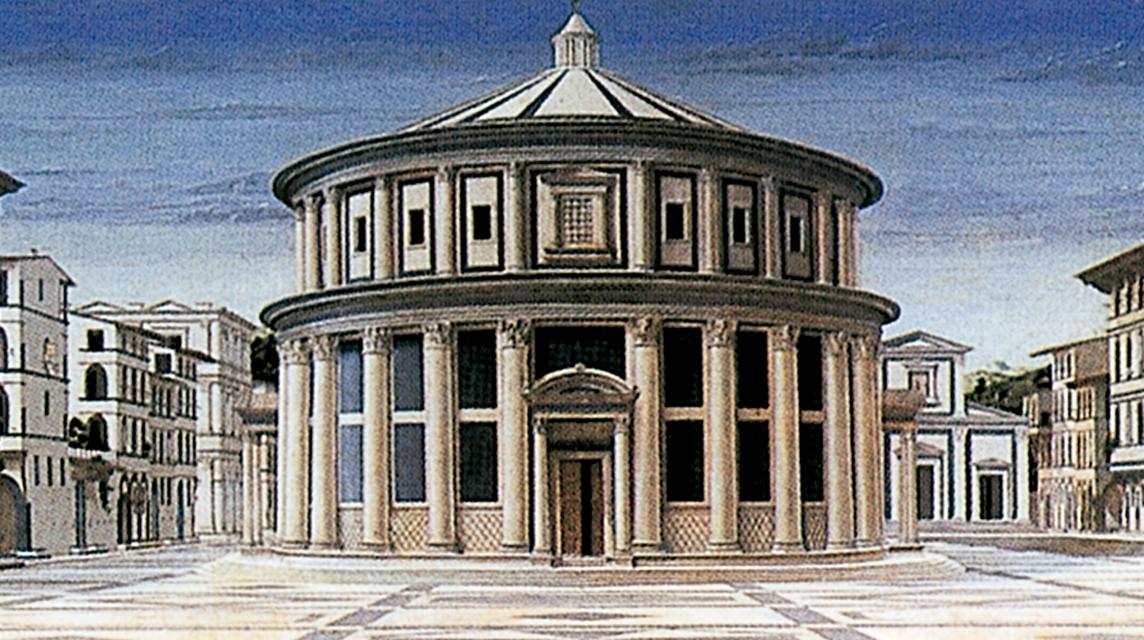 The Ideal City in History 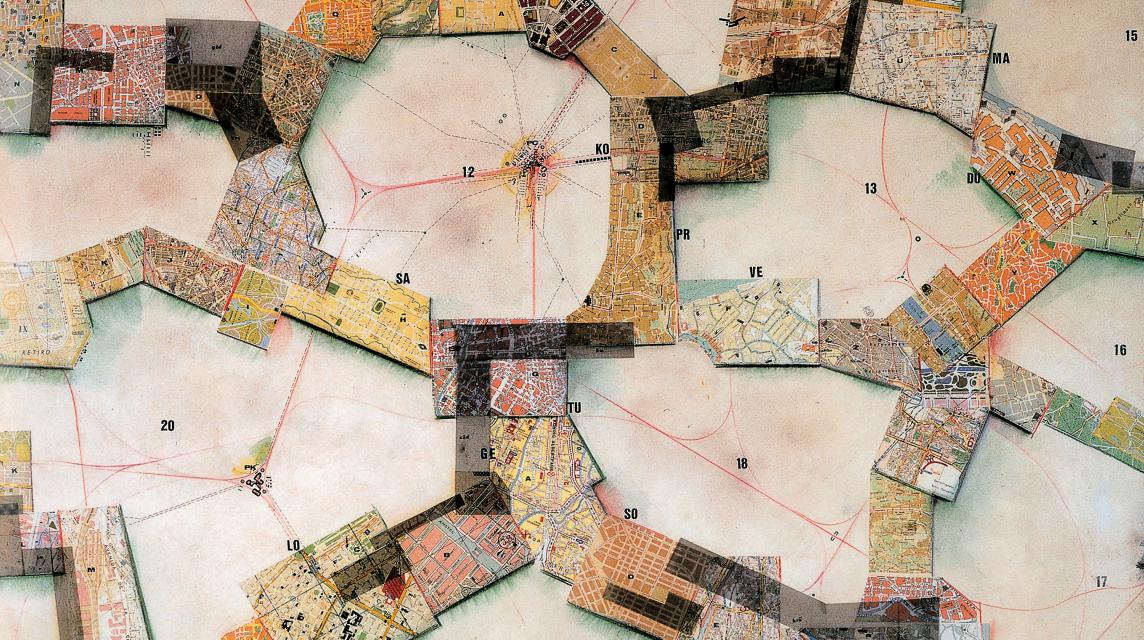 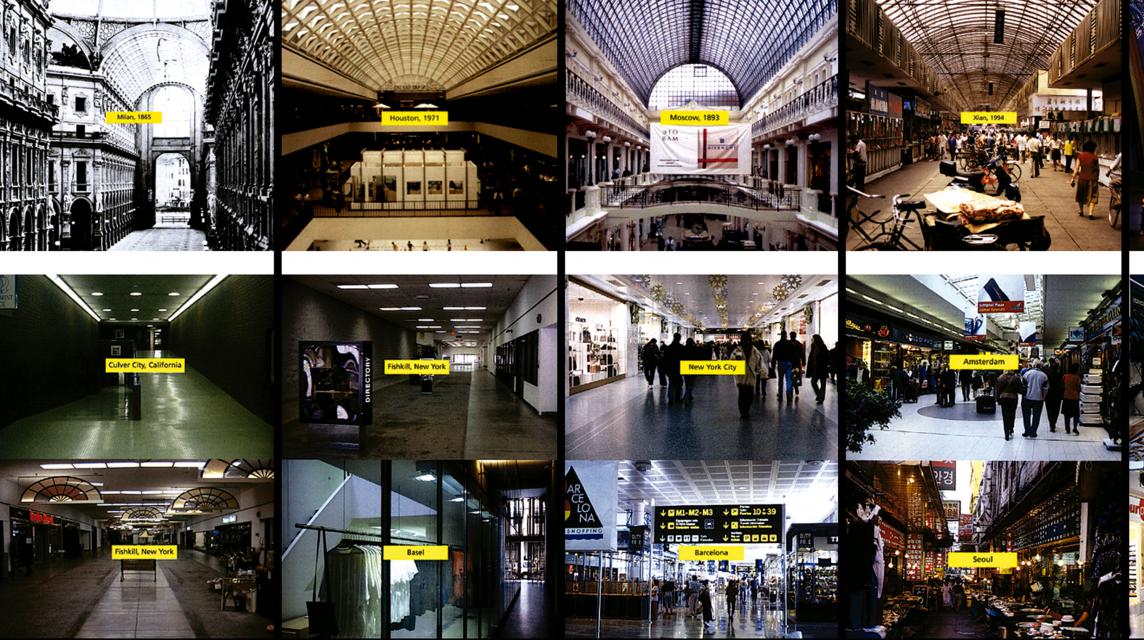 OMA - Office for Metropolitan Architecture   China   Like any self-respecting media event, the olympic transformation of Beijing for the Games of 2008 requires, aside from new infrastructures and extra sports facilities, a powerful television network to broadcast the event to the whole world. With this

Eisenman, an American in Europe

Fantasies of the Harem

Babylons. The ideal city is the thread that ties up art and architecture in the II Biennial of Valencia, a cultural event inaugurated after the worldwide shock of a war that has confronted the old Babylon where urban life was born with the new Babel of the technological metropolis. Here, the ancient myth of the unfinished tower weaves contemporary dilemmas with historic iconography, the devastation of built heritage and the material and symbolic cracks opened between America, Europe and the Third World by this conflict.

City, Utopia and Reality. Joseph Rykwert reviews the urban utopias, while Mark Wigley and Sophie Trelcat describe the more recent ones, from the New Babylon of Constant to those of the Smithsons or Koolhaas. For their part, Vicente Verdú and Lars Lerup explore the new suburban territories, and Aaron Betsky outlines a panorama of high-rise construction after September 11.

An American in Europe. Peter Eisenman and Leon Krier compare in Yale their ideal architectures; but if the former raises today in Galicia a city of culture, the latter’s residential acropolis in Tenerife was never materialized.

Southern Women. The CCCB presents in a multifaceted exhibit the myth and reality of the harem; and with a retrospective, Córdoba pays tribute to the painter Julio Romero de Torres, creator of the Andalusian woman archetype.  Juan José Lahuerta
Fantasies of the Harem
Juan Antonio Ramírez
The Painter of PassionsConflict and Catastrophe. On the anniversary of the attack on the Twin Towers, Peter Sloterdijk, W.G. Sebald and Noam Chomsky, among others, publish their reflections on the reasons and consequences of contemporary terror.
Focho’s Cartoon
Shigeru Ban
Various Authors
Books
Recent Projects

Museum Genres. A French volcanology center has allowed Hans Hollein to finally carry out his protractedly dreamed project of excavated architecture; a British space museum has permitted Nicholas Grimshaw to continue his long research on light enclosures. For their part, and with the severity that the program demanded, Claus & Kaan have built a Holocaust museum in what used to be a Nazi concentration camp in Holland; and Schneider & Schumacher, a memorial amongst the remains of another confinement site in Germany.

To close,  and using a game of poker as a metaphor, the Dutch critic Ole Bouman writes his impressions on the eve of a war against Iraq that was forged in New York, among the smoking rubble of two skyscrapers.  Products
Brick, Tile and Glass
Ole Bouman
‘What a difference a day makes’

Emperor and Spectre
George Bush salutes in Fort Drum, New York, and so does Saddam Hussein from a mural riddled with bullets during the Gulf War, in Zajo, Iraq. The Empire would send its troops out to hunt a fleeting spectre that multiplies in doubles, evasive and omnipresent as his arms of mass destruction.

Metropolis vs Babel
Scenography of Erich Kettelhut for Metropolis, and the Tower of Babel by Brueghel in Rotterdam. The menacing urban dawn that materialized in Manhattan colossal stepped pyramids with vague mesopotamic echoes stands in contrast with the ominous storm clouds in the byblical ziggurat.

Babylon’s Apocalypse
The Presidential Palace on the Tigris River on fire after Baghdad’s bombing. The Iraq war began with the destruction of a modern ziggurat which feigned to continue the urban culture that built the skyscraper of hanging gardens, now fatally confronted with the American New Babylon.

Seizing the Symbols
U.S. tanks pass under the Arch of Swords, and marines advance before the Martyrs’ Monument. The landmarks of Saddam witnessed the victory prefigured in the change of the flags, which also produced a deep fracture between civilizations and a defeat of the international legal order.