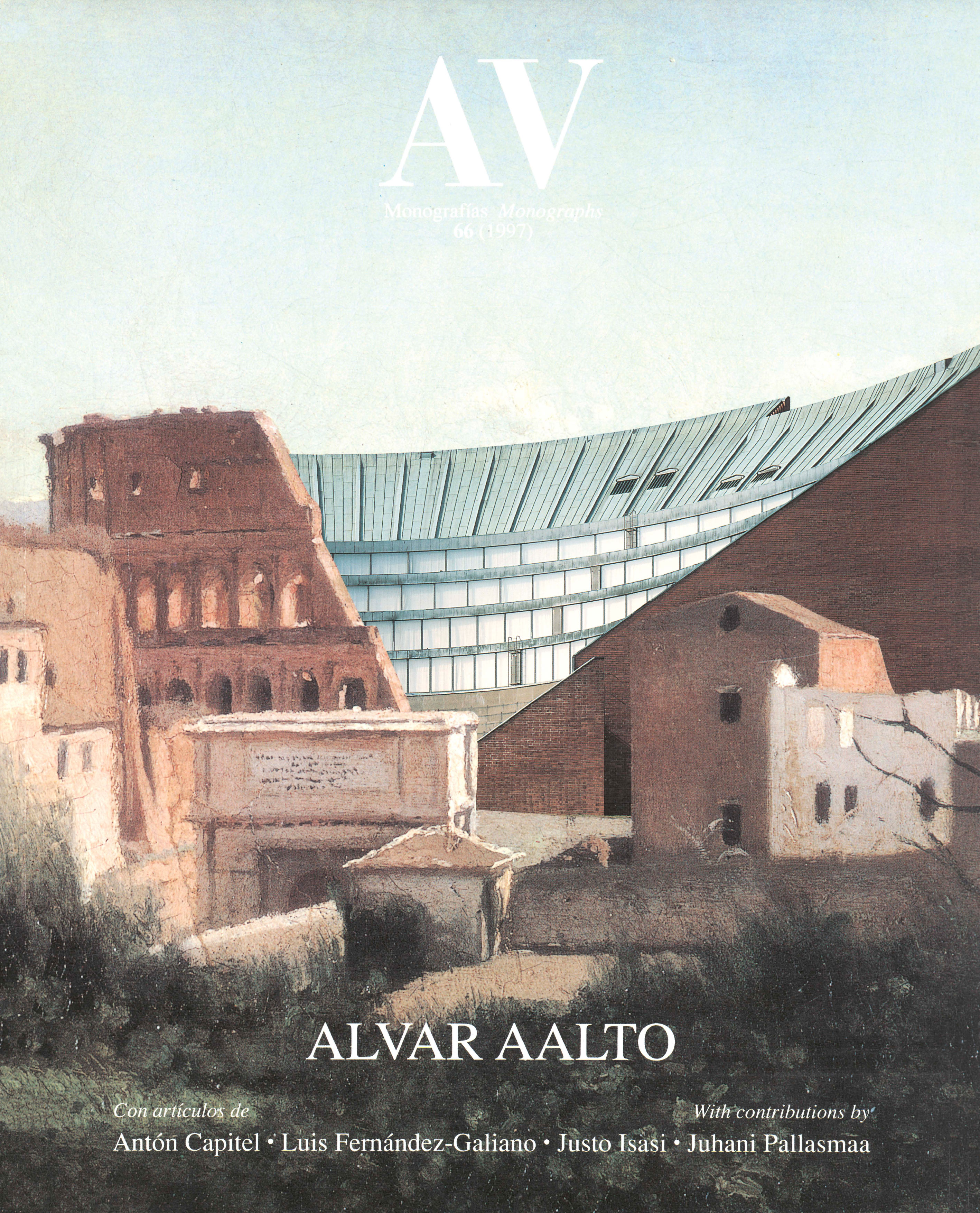 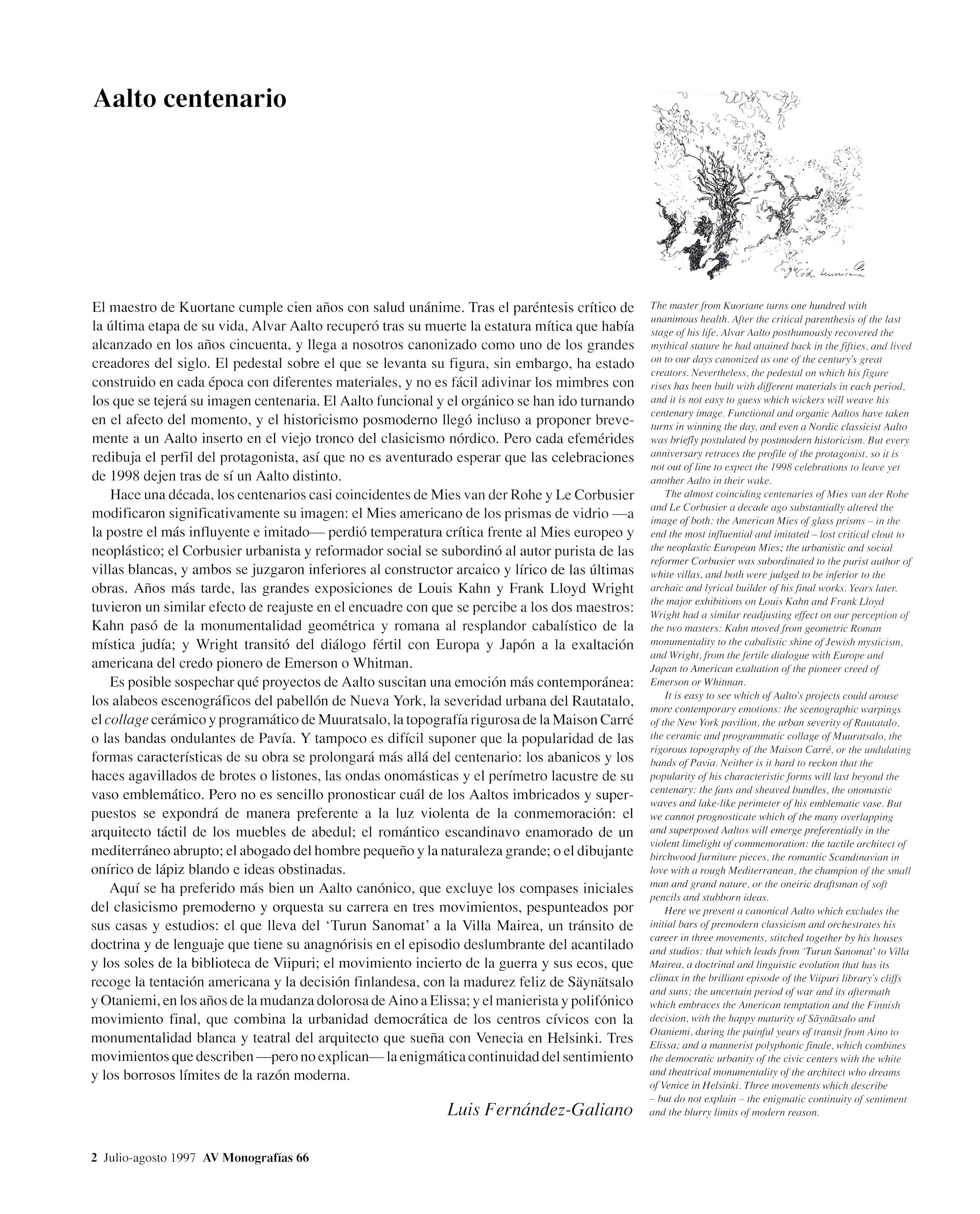 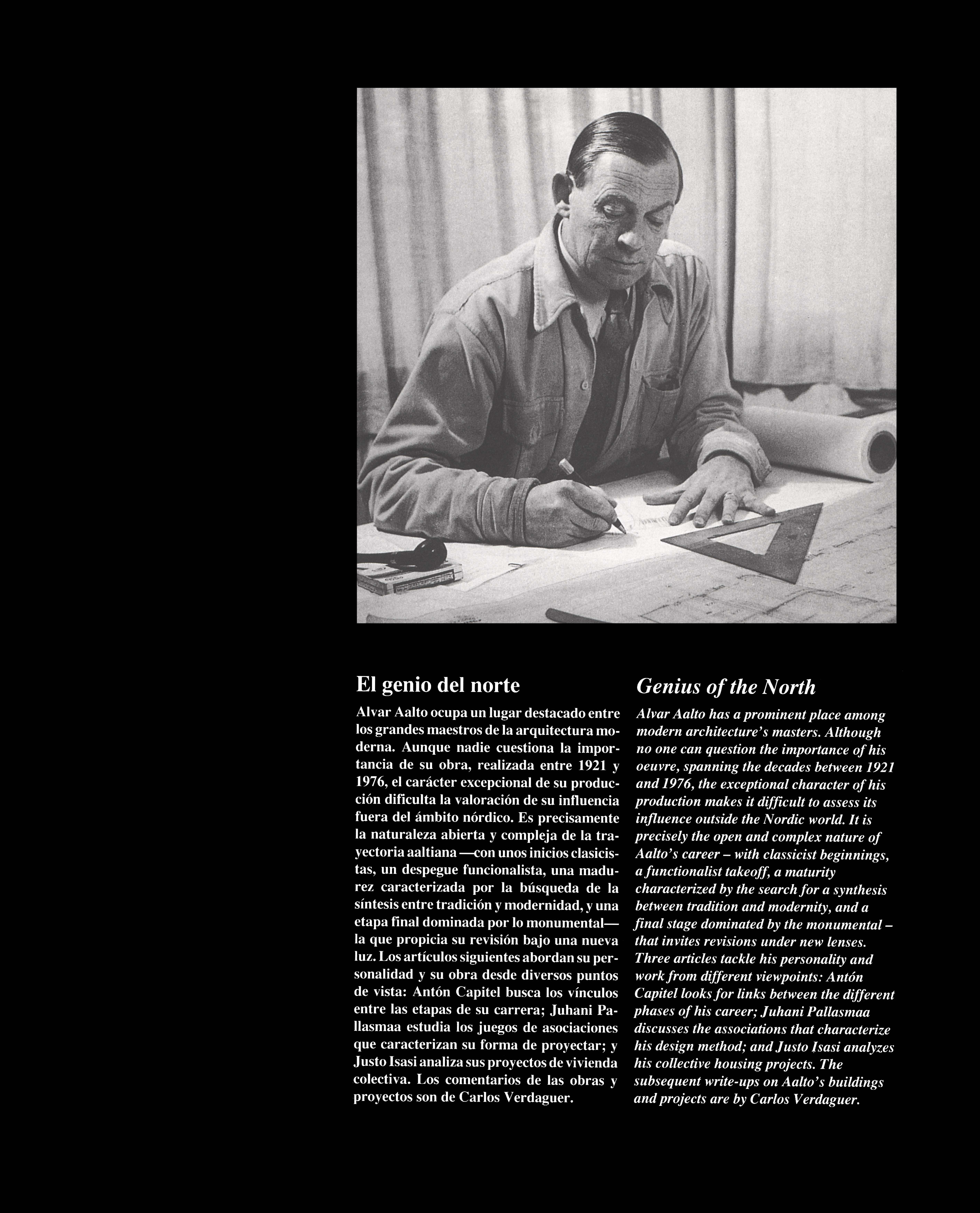 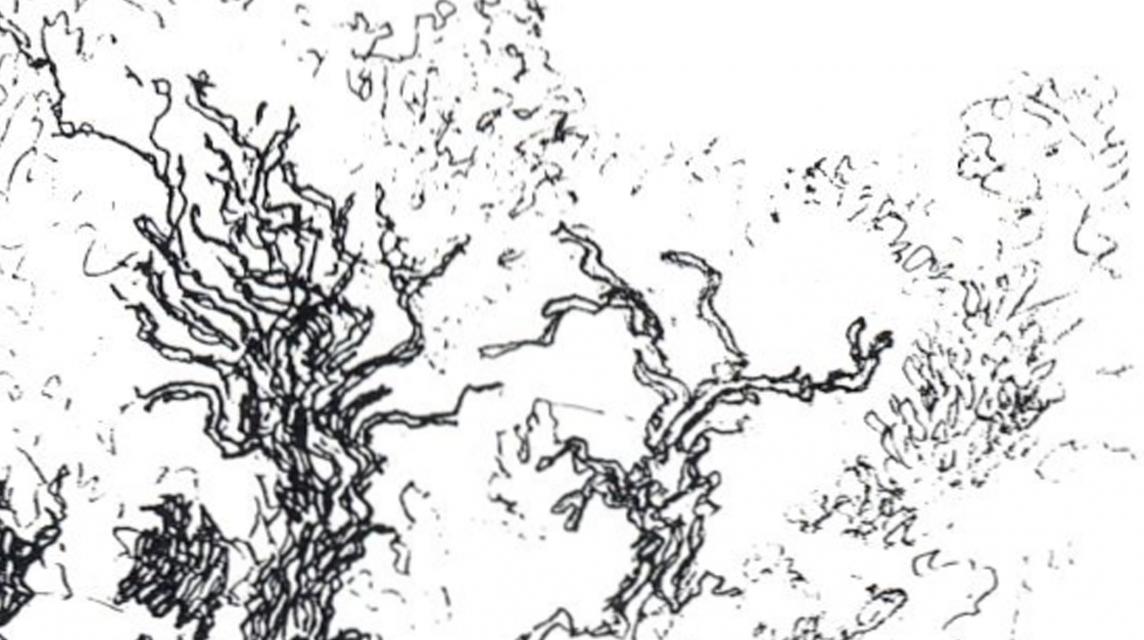 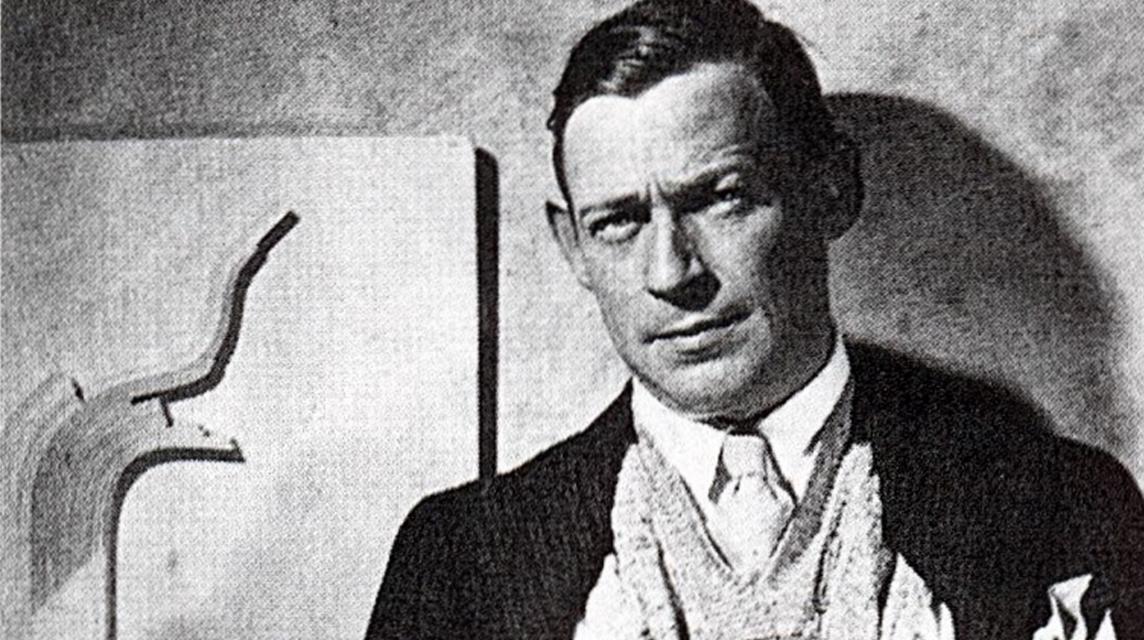 The Synthesis of Modernity

Antón Capitel   Hugo Alvar Henrik Aalto (Kuortane, 1898 - Helsinki 1976) was born in the northeastern corner of Europe, where the solitary landscape hails the proximity of the North Pole. But such peripheral origins are not to be taken as marginal: Aalto was born in 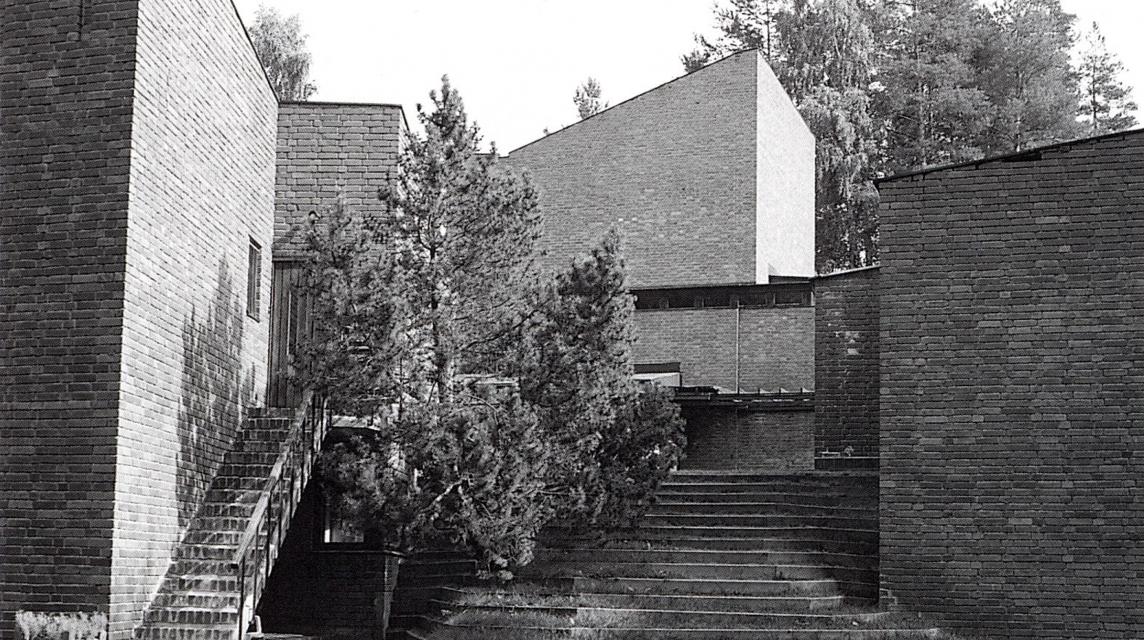 An Architecture of Imagery

Juhani Pallasmaa   Contemporary architecture has been criticized for its sensory poverty and lack of meaning by the public and critics alike. When almost any old building, a ruin or an abandoned house evokes our imagination and invites our emotions, standard buildings 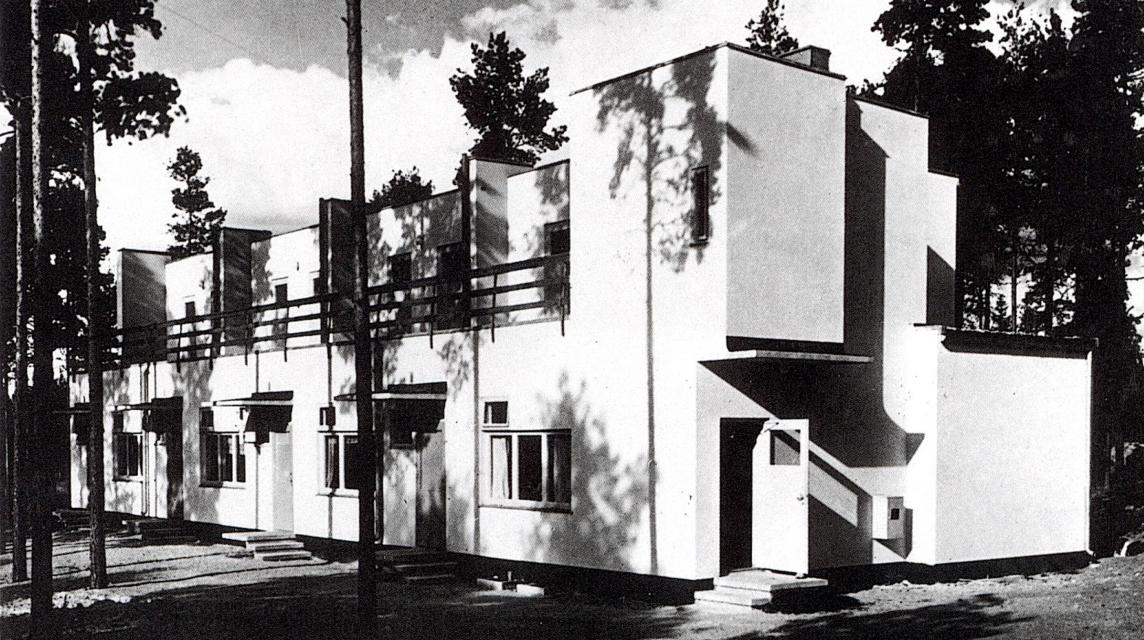 Another Mode of Dwelling

Justo Isasi   Mass housing spread throughout the West toward the fifties. Europe’s postwar reconstruction and economic development gave the residential project a formidable push. This was housing for a future that was becoming a reality and which endeavored to be 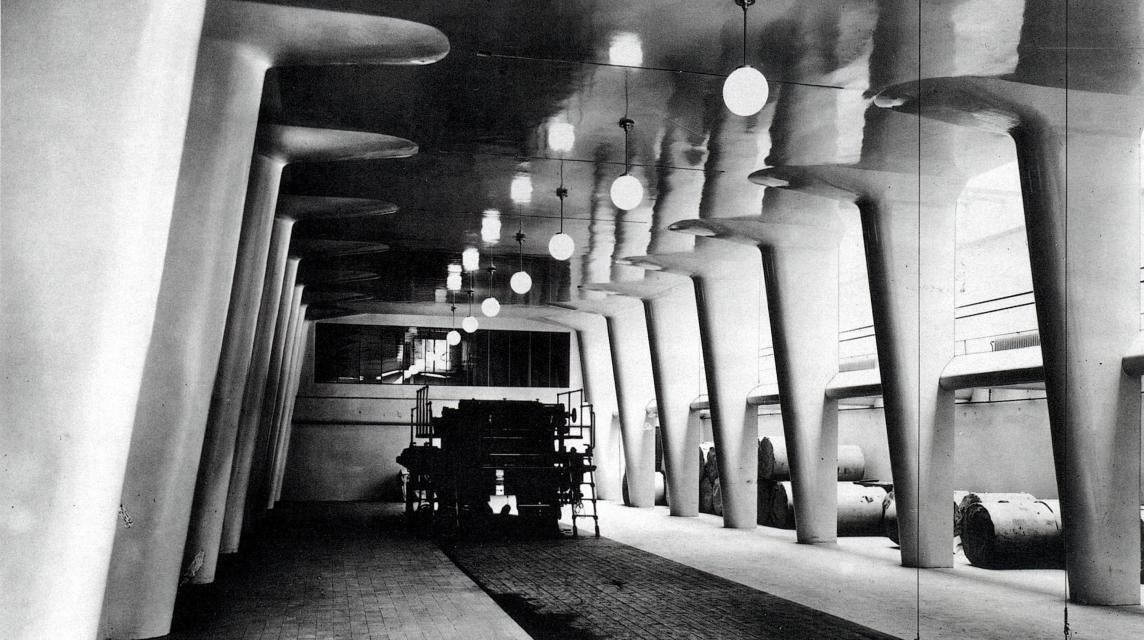 Alvar Aalto   Finland   When Arvovo Kitonen, owner of Turku's main newspaper, the Turun Sanomat, commissioned Alvar Aalto late in 1927 to design its new office and production building, the young Finnish architect, along with his friend and eventual collaborator Erik Bryggma 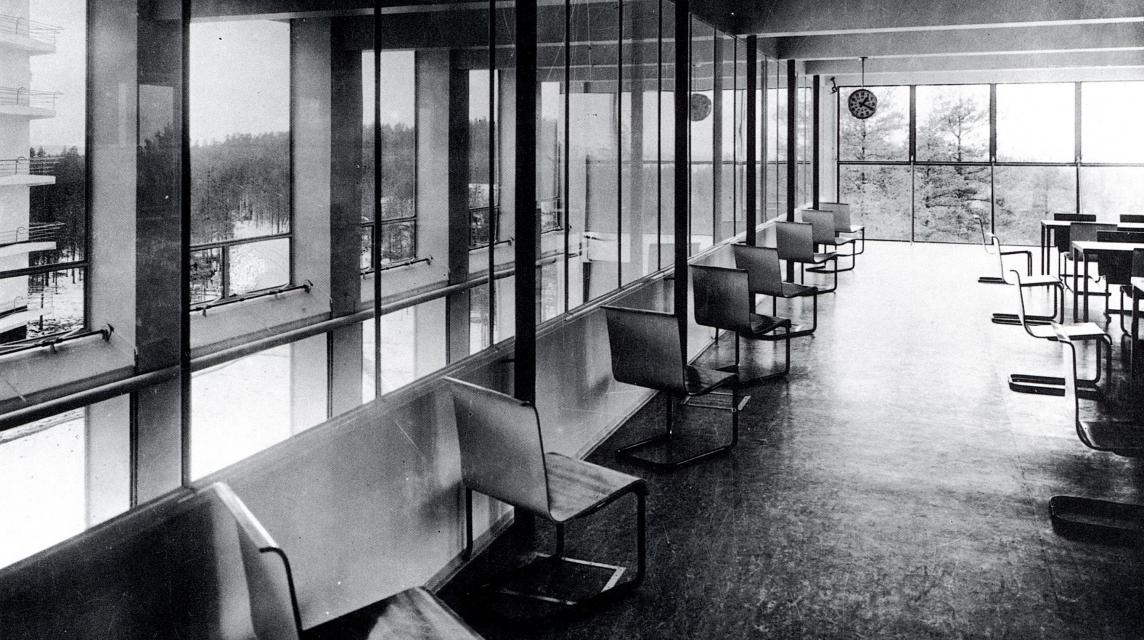 Alvar Aalto   Finland   Alvar Aalto’s years of residence in Turku, from 1927 to 1933, coincided with his period of enthusiasm for functionalism, during which, in 1928, he became an active participant of the CIAM. True enough, he began to distance himself from Modern Movemen 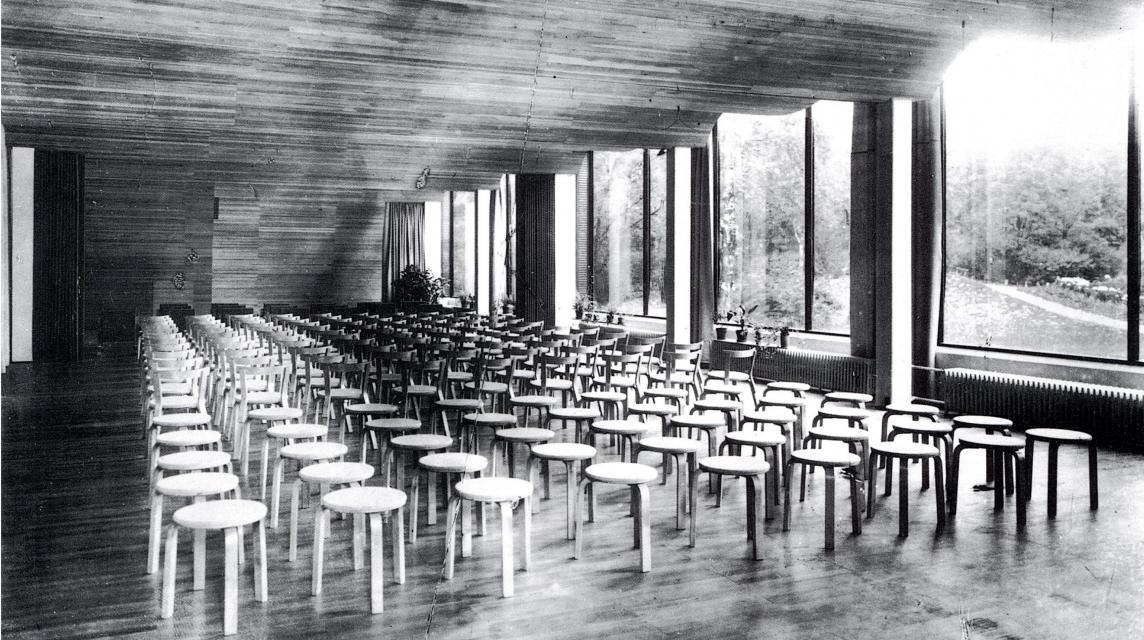 Alvar Aalto   Russia   The protacted process that the development of the project for the municipal library of Viipuri involved reflects Alvar Aalto’s transition from classicism to the postulates of the Modern Movement, and subsequently to his abandonment of both. It could 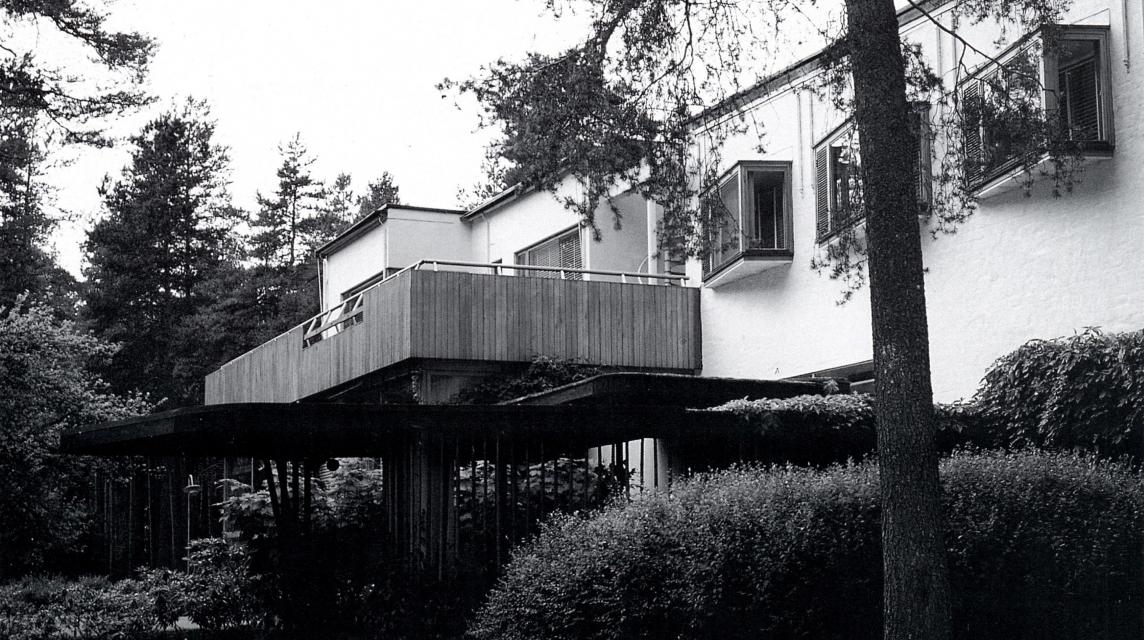 Alvar Aalto   Finland   Even before the inauguration of the Viipuri library, Alvar Aalto had begun to move away from some Modern Movement postulates. Influenced perhaps by the political situation of his country, he also started to question hard-core internationalism and to 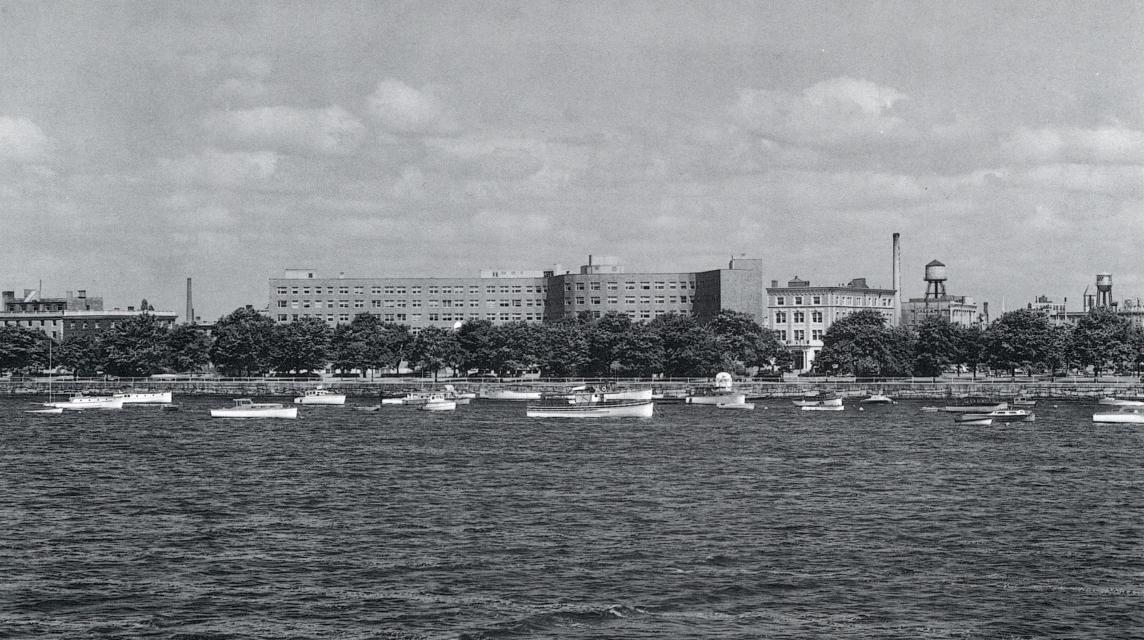 Alvar Aalto   United States   Though alvar Aalto had a lifelongrelationship with the United States, it was particularly intense in the forties thanks to a series of prolonged stays. The first was in 1940, at the height of war in his country, when he busied himself with activities 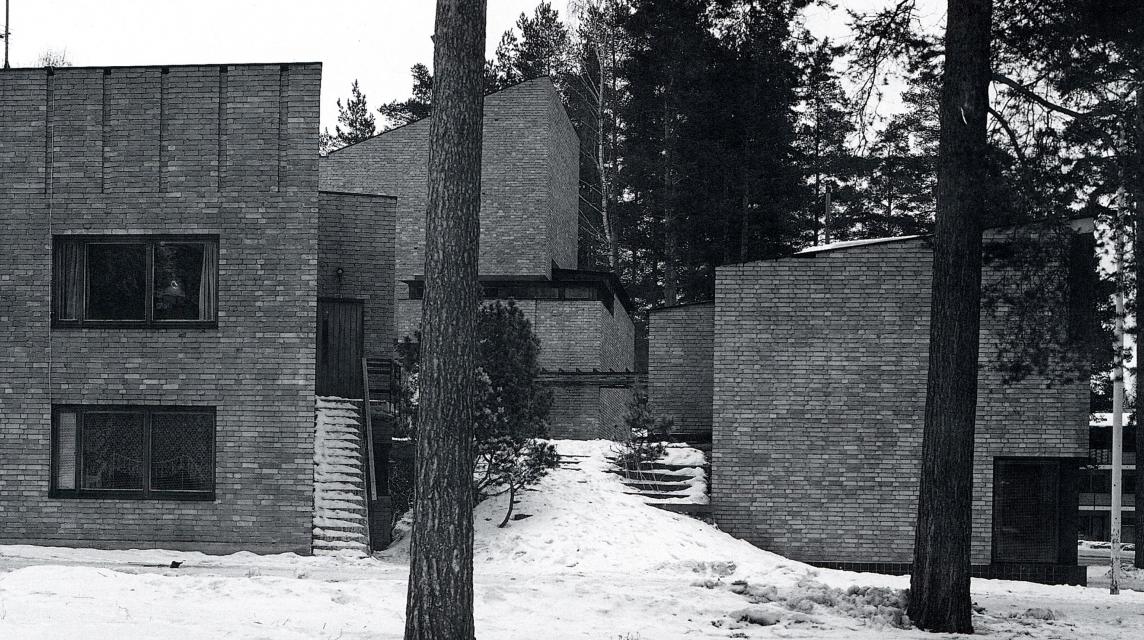 Alvar Aalto   Finland   Aino's death was a point of inflection in the life and career of Alvar Aalto, and coincided with his relative distancing from more directly social approaches, both where fields of investigation are concerned and in the typologies undertaken by him. T

Alvar Aalto   Finland   Alvar Aalto still had a foot in the United States in October 1948, when he submitted his entries to the competition for the National Pensions Institute, but his winning first prize the following year in both this competition and that of the universit

Alvar Aalto   Finland   In a letter Alvar Aalto wrote in 1949 to his friend William W. Wurster, dean of MIT’s architecture department, to explain that he intended to delay his return to the USA because he had just won the competition for a campus at Otaniemi, the architect

Church of the Three Crosses, Imatra

Alvar Aalto   Finland   Notwithstanding his Voltairean agnosticism and admiration for the anarchist Piotr Kropotkin, church design was much a part of Alvar Aalto's career since early on in his classicist phase. Dating back to this period is his elegant chapel of Muurame (19

Alvar Aalto   Finland   The notion of a civic center where people can gather around public functions represented by monumental buildings took up a central place in Alvar Aalto’s mind. The 1944 masterplan for the Swedish locality of Avesta was the architect’s first opportuni

Alvar Aalto   Finland   Almost totally destroyed in 1940 on account of the second war with Russia, the city of Rovaniemi - capital of the Finnish Lapland - was the object of a project by Alvar Aalto in 1944, when he was appointed to prepare a large-scale plan for its urban

Alvar Aalto   Finland   Converging in the history of the Finlandia Concert and Congress Hall are two frustrations of Alvar Aalto that were to remain as such until his death on May 11, 1976: the plan for Helsinki’s new center and the Essen opera house. They date back to 1959

The master from Kuortane turns one hundred with unanimous health. After the critical parenthesis of the last stage of his life, Alvar Aalto posthumously recovered the mythical stature he had attained back in the fifties, and lived on to our days canonized as one of the century's great creators. Nevertheless, the pedestal on which his figure rises has been built with different materials in each period, and it is not easy to guess which wickers will weave his centenary image. Functional and organic Aaltos have taken turns in winning the day, and even a Nordic classicist Aalto was briefly postulated by postmodern historicism. But every anniversary retraces the profile of the protagonist, so it is not out of line to expect the 1998 celebrations to leave yet another Aalto in their wake.

The almost coinciding centenaries of Mies van der Rohe and Le Corbusier a decade ago substantially altered the image of both: the American Mies of glass prisms — in the end the most influential and imitated — lost critical clout to the neoplastic European Mies; the urbanistic and social reformer Corbusier was subordinated to the purist author of white villas, and both were judged to be inferior to the archaic and lyrical builder of his final works. Years later, the major exhibitions on Louis Kahn and Frank Lloyd Wright had a similar readjusting effect on our perception of the two masters: Kahn moved from geometric Roman monumentality to the cabalistic shine of Jewish mysticism, and Wright, from the fertile dialogue with Europe and Japan to American exaltation of the pioneer creed of Emerson or Whitman.

It is easy to see which of Aalto's projects could arouse more contemporary emotions: the scenographic warpings of the New York pavilion, the urban severity of Rautatalo, the ceramic and programmatic collage of Muuratsalo, the rigorous topography of the Maison Carré, or the undulating bands of Pavia. Neither is it hard to reckon that the popularity of his characteristic forms will last beyond the centenary: the fans and sheaved bundles, the onomastic waves and lake-like perimeter of his emblematic vase. But we cannot prognosticate which of the many overlapping and superposed Aaltos will emerge preferentially in the violent limelight of commemoration: the tactile architect of birchwood furniture pieces, the romantic Scandinavian in love with a rough Mediterranean, the champion of the small man and grand nature, or the oneiric draftsman of soft pencils and stubborn ideas.

Here we present a canonical Aalto which excludes the initial bars of premodern classicism and orchestrates his career in three movements, stitched together by his houses and studios: that which leads from 'Turun Sanomat' to Villa Mairea, a doctrinal and linguistic evolution that has its climax in the brilliant episode of the Viipuri library's cliffs and suns; the uncertain period of war and its aftermath which embraces the American temptation and the Finnish decision, with the happy maturity of Säynätsalo and Otaniemi, during the painful years of transit from Aino to Elissa; and a mannerist polyphonic finale, which combines the democratic urbanity of the civic centers with the white and theatrical monumentality of the architect who dreams of Venice in Helsinki. Three movements which describe — but do not explain — the enigmatic continuity of sentiment and the blurry limits of modern reason.