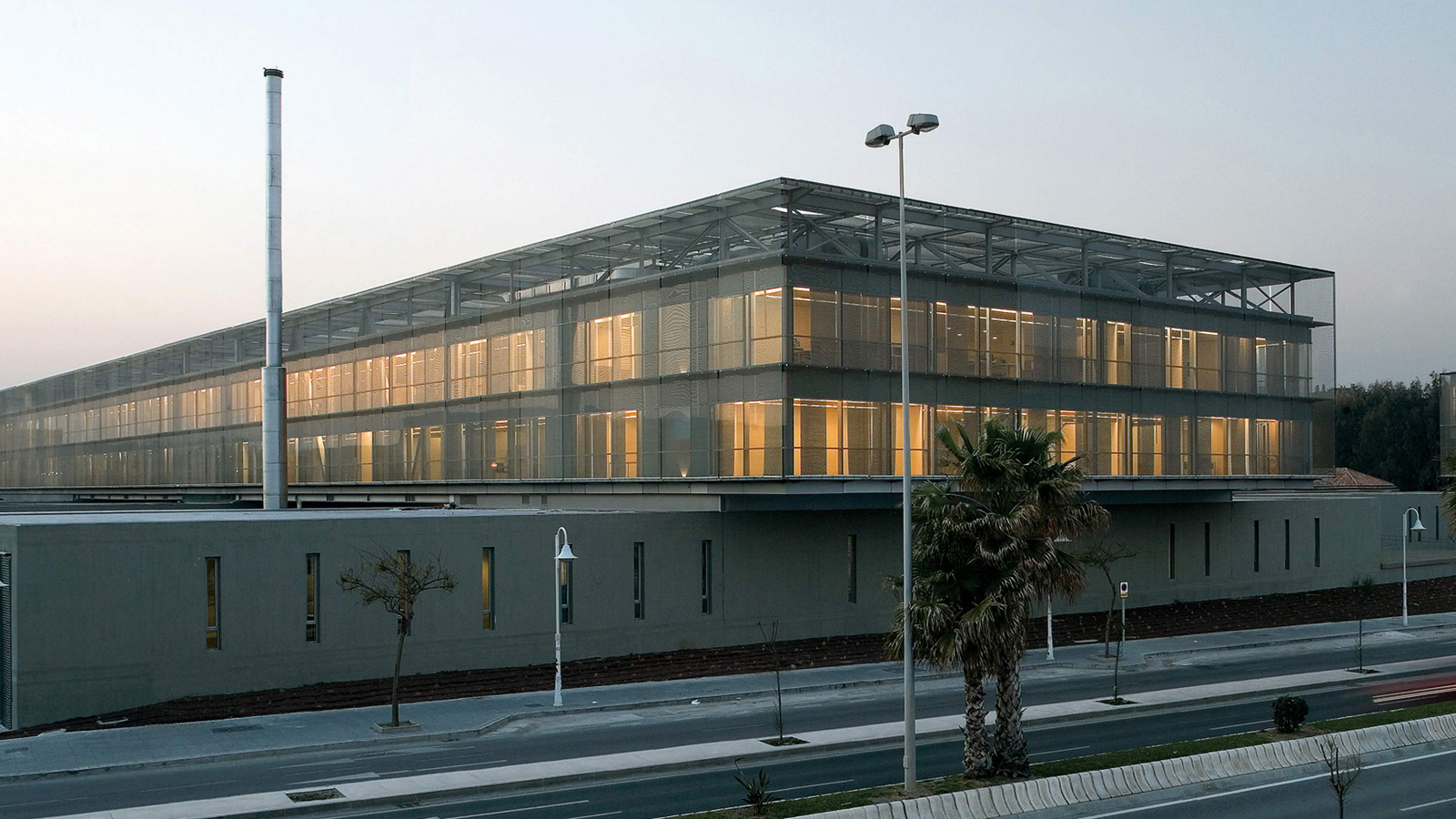 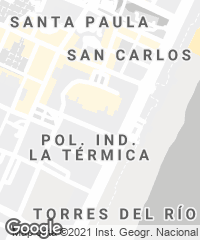 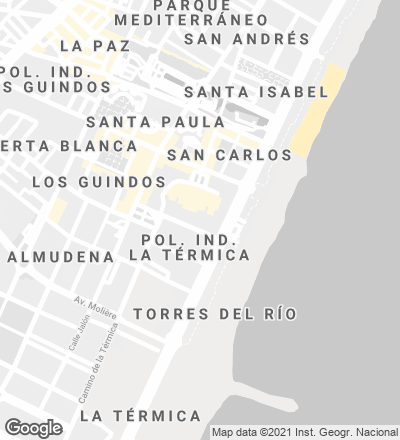 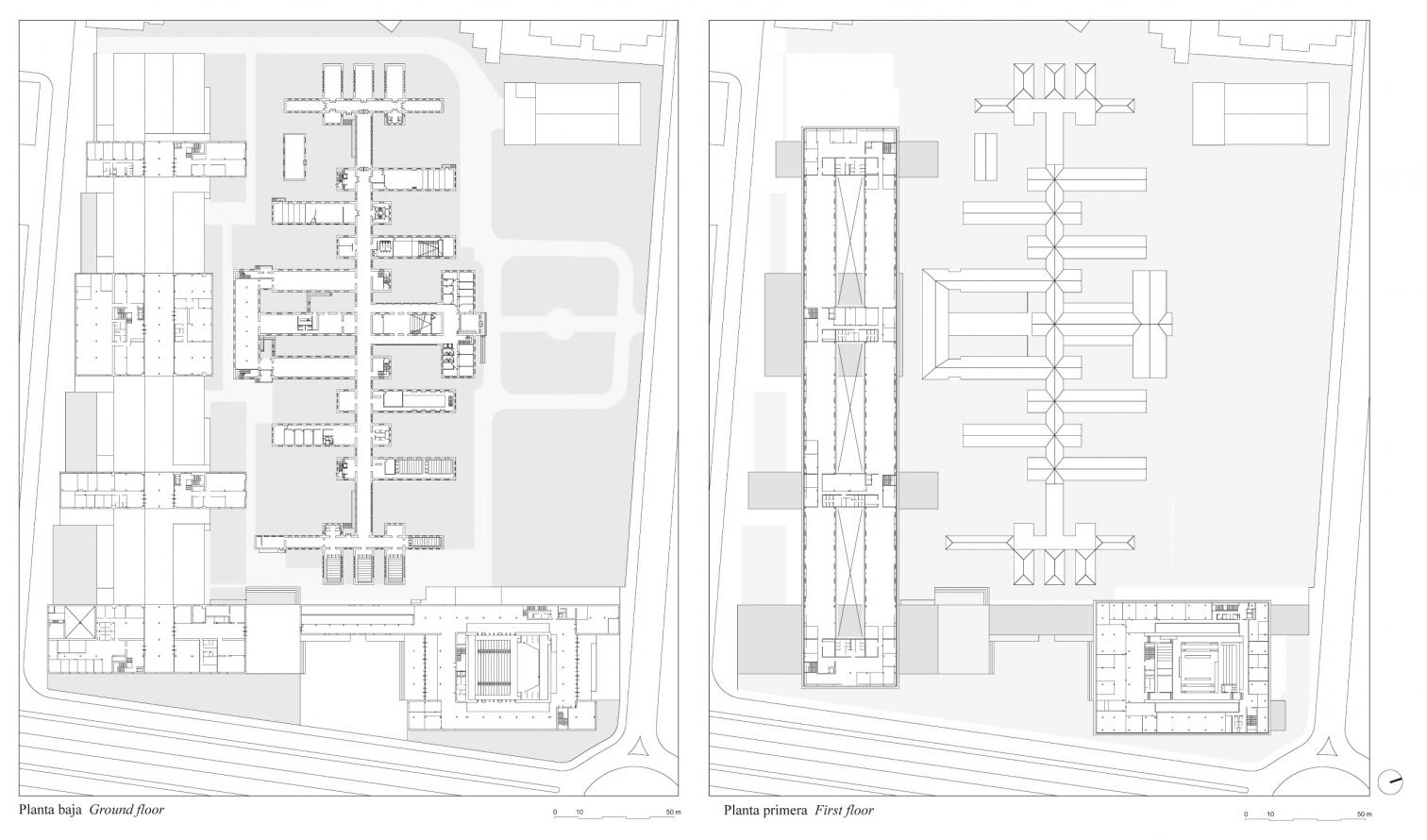 Both the direction and the distribution of the pieces of the old Civic Center determine the morphology of the new building, marked by a horizontal character that respectfully reduces the height of its different volumes.

The new building dialogues with the historical one, stretching horizontally and concentrating the program in two perpendicular volumes that follow the orientation of the old structure, rotating slightly and thus departing from the alignments of the streets that compose the urban block.

While the main volume is clearly defined along the east corner, in front of the roundabout where Guindos avenue and Pacífico street come together, the elongated piece facing the coast rests on bold parallelepipeds perpendicular to its greater axis on ground floor. These volumes are separated by interstitial spaces that generate covered courtyards that fluff up the access level. 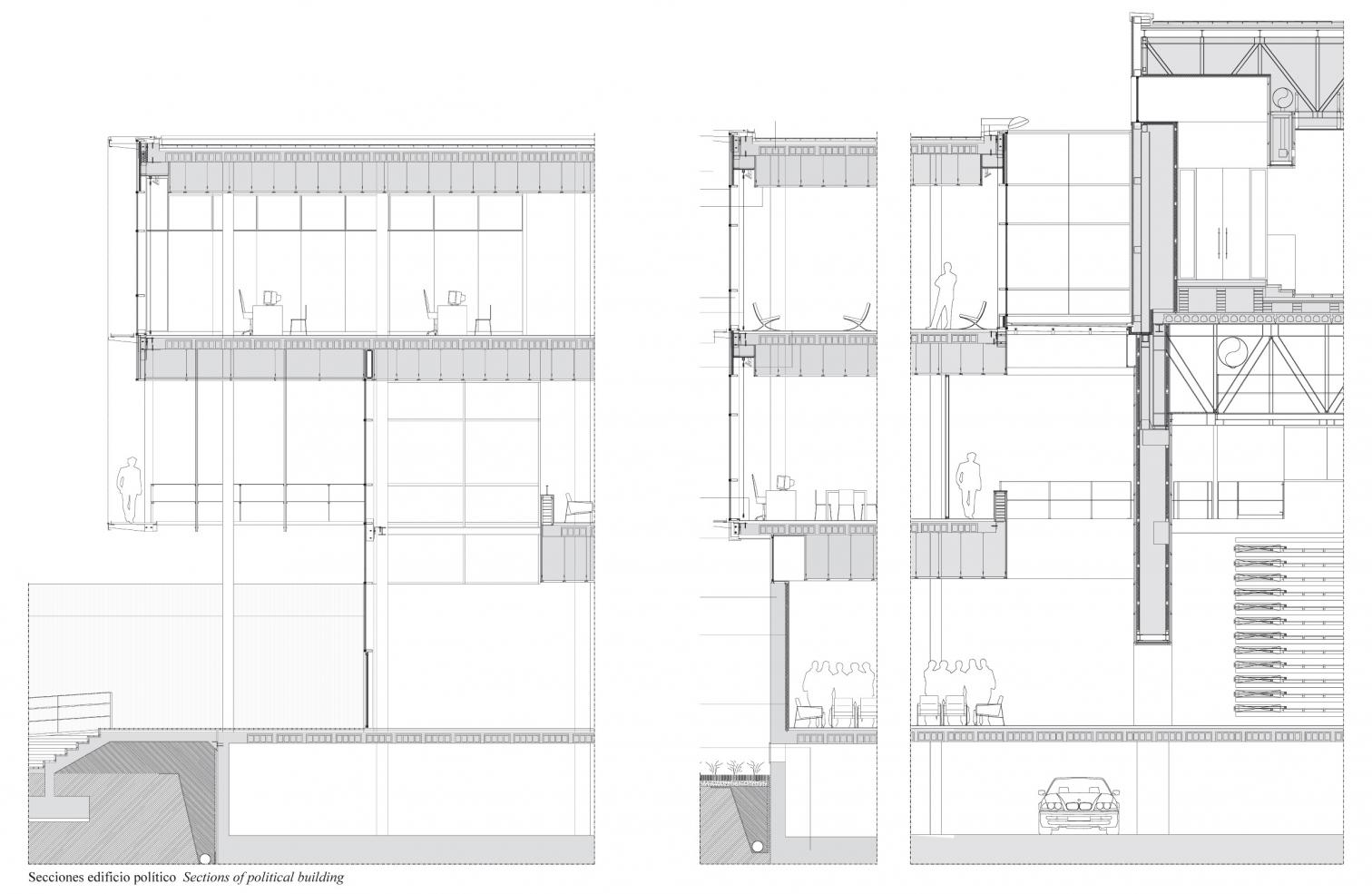 Transversal to the administration building, the volumes on ground floor contain the installations and services. Placed on top of them, the areas devoted to citizens’ services emerge as large glazed pieces.

The program of the Provincial Government, which combines representative and managerial functions, is divided between the two buildings respectively called ‘political’ and ‘administrative’. The first one contains the institutional premises, that is, the bureaus of the political parties, the secretary’s office and the plenary assembly hall, the central element of the complex and that performs as a small parliament.

The second building stretches along Almonte street and contains the services, technical areas and administration offices. Both are connected at lower-ground floor by a ramp that links up the different premises, spanning the unevenness of the terrain.

As public space, the Provincial Government Headquarters appears clear and permeable to its context, both in its volume – with gardens that make their way into the ground floor – and in its enclosure of glass and steel mesh.

The building has been designed following guidelines that aim to achieve a greater environmental sustainability including, on the one hand, a trigeneration system that produces heat, cooling and electricity from a single natural gas source and, on the other hand, domotic solutions that reduce the consumption of artificial lighting. 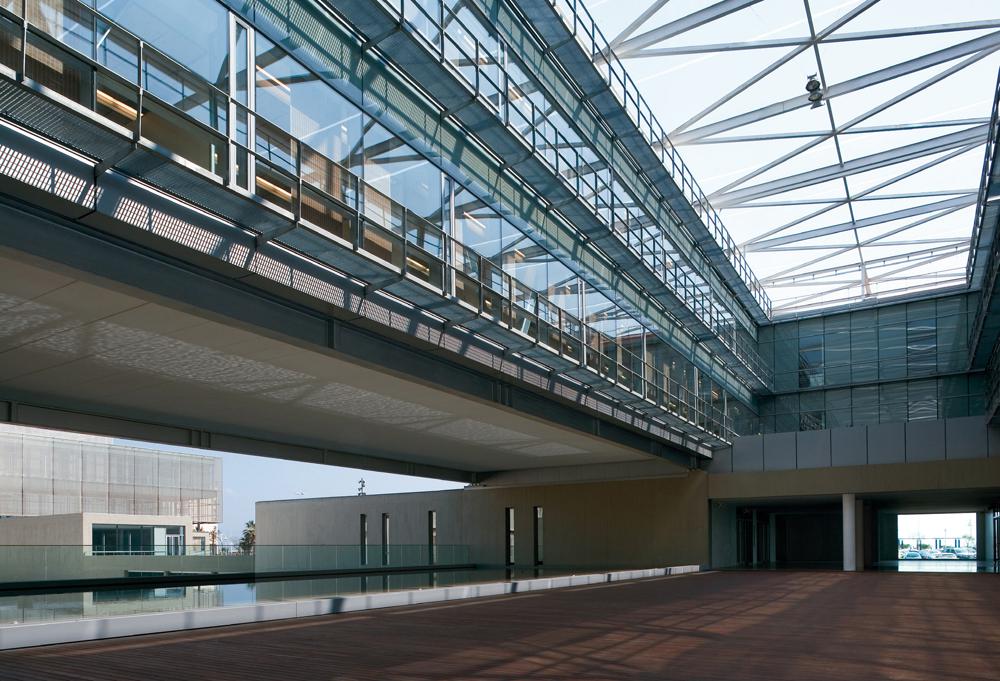 In terms of construction, the layers that form the facades regulate the levels of sunning and temperature and give the rooms a certain degree of privacy, though without interfering with the image of transparency that a public institution wishes to convey. This is achieved thanks to glazed surfaces that stretch along the perimeter with a modulation that accentuates the horizontal character of the volumes, protected by a stainless steel grid that filters both the views and sunrays.. 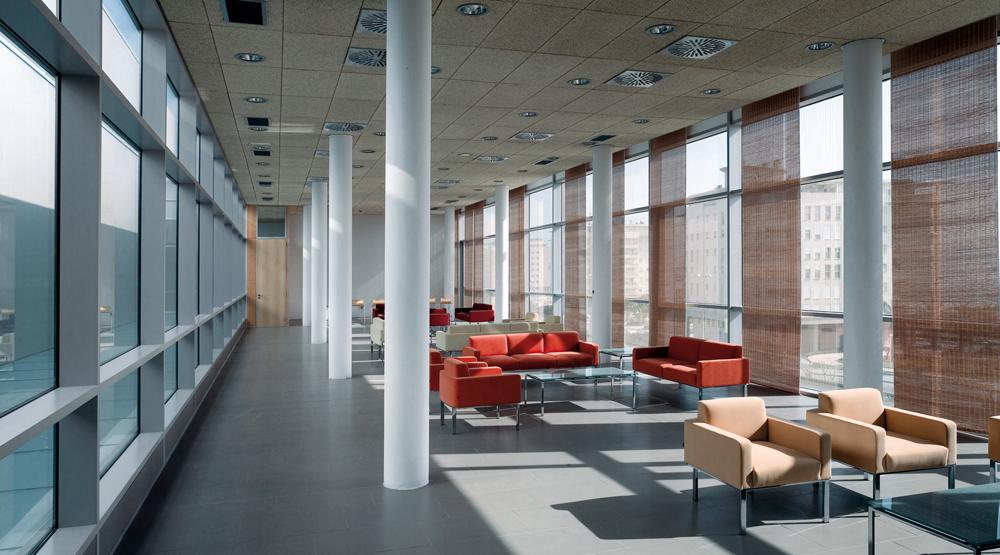 In the exterior, the narrow walkway stretching between the two skins that form the enclosures enables their proper maintenance. For their part, the interior areas that give access to the plenary assembly hallare configured as double height spaces bathed by zenithal light. 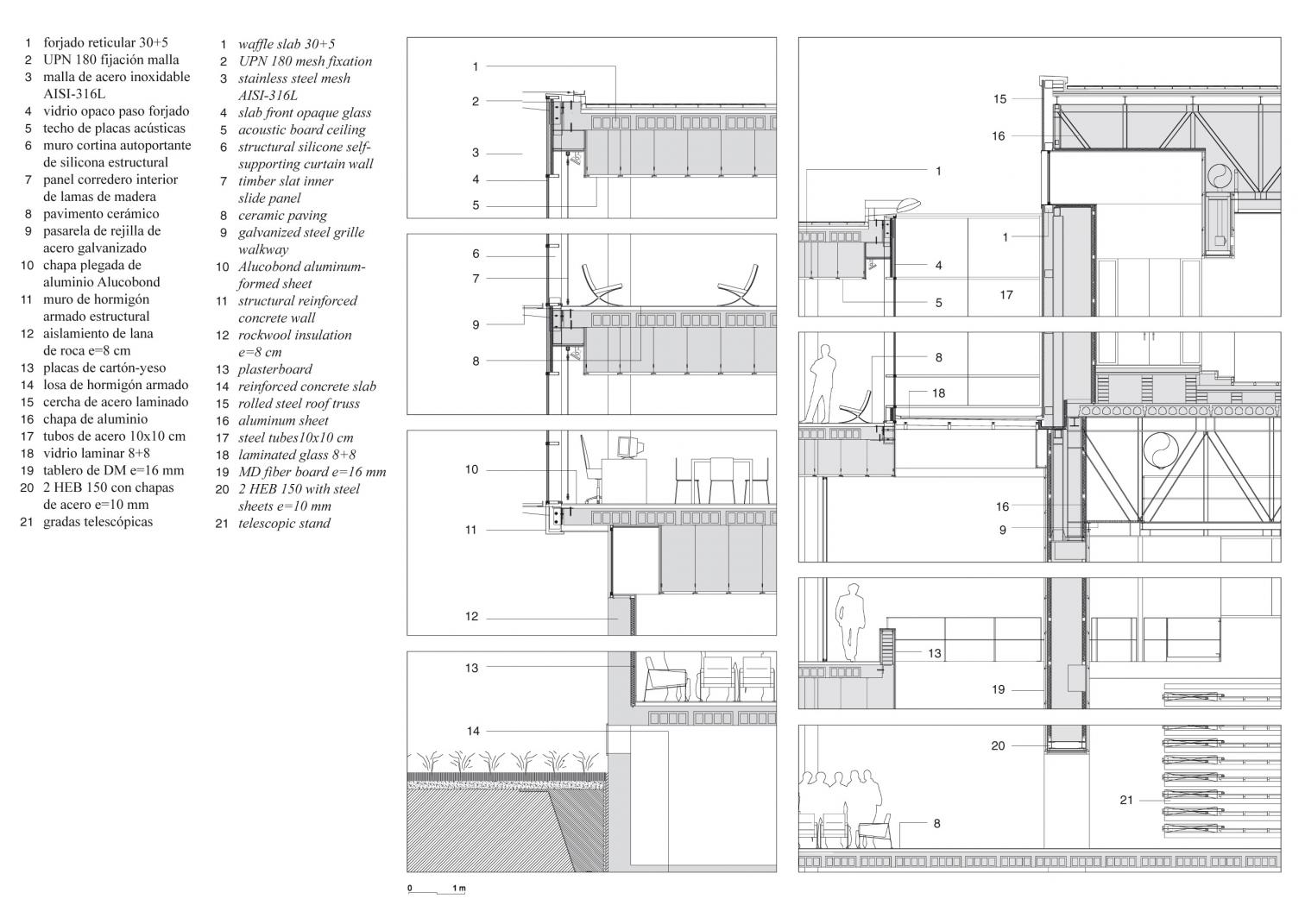 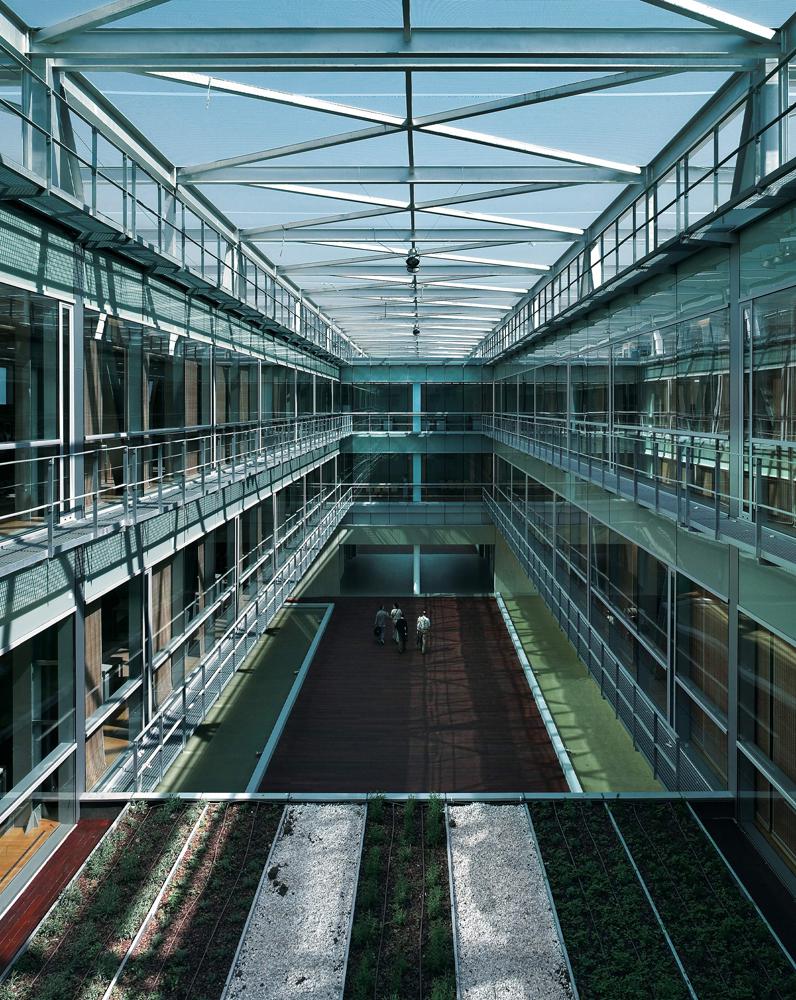 Antonia Fernández Nieto Pilar Peña Tarancón   Spain   THE NEW office building of the ProvincialGovernment of Zamora faces the challenge of adjusting to one of the key environments in Zamora, the Plaza de Viriato. This new facility had to round off the square, becoming the fourth facade of a complex made