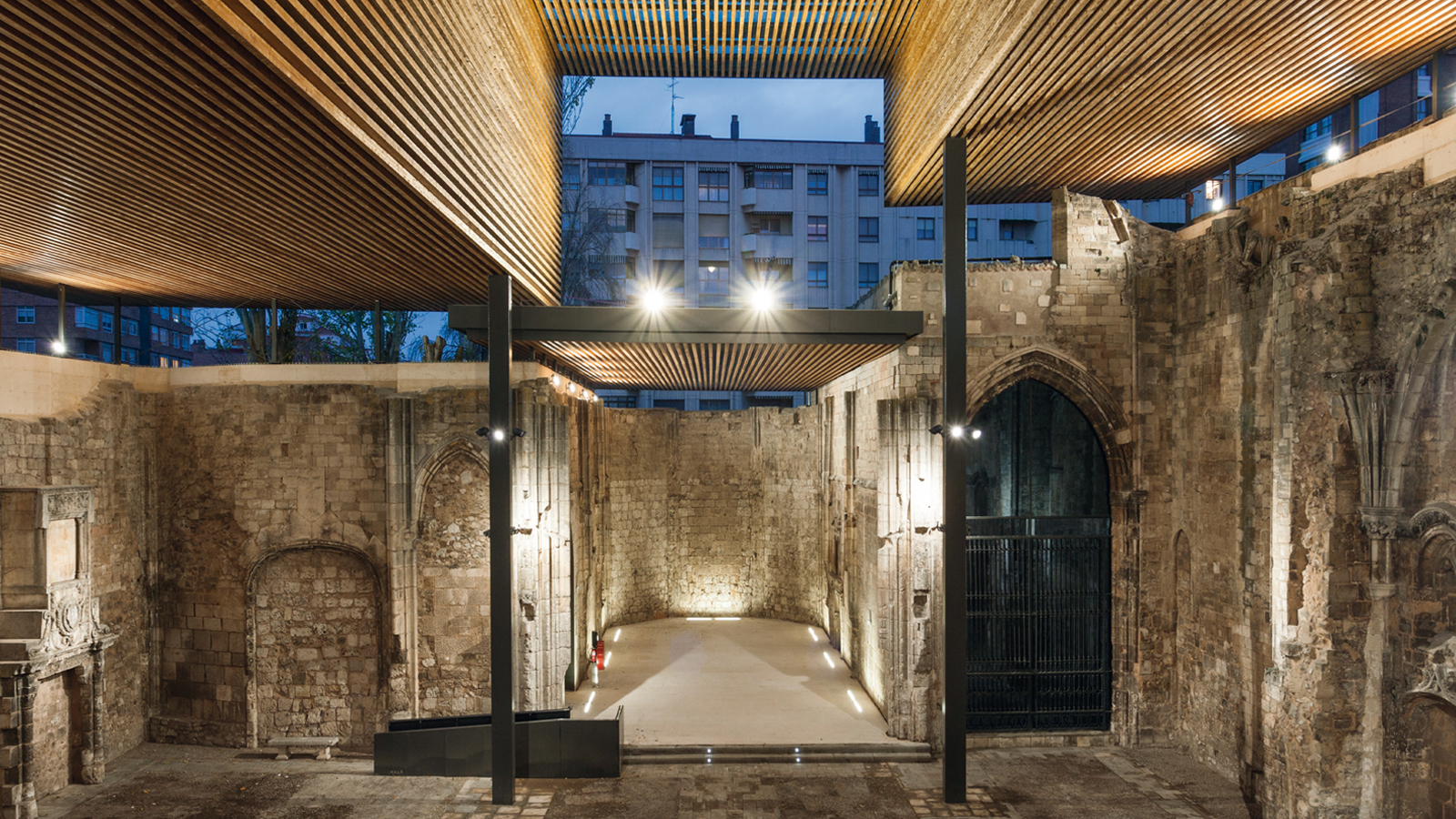 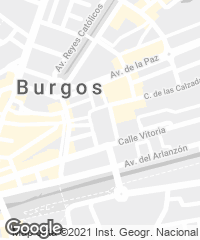 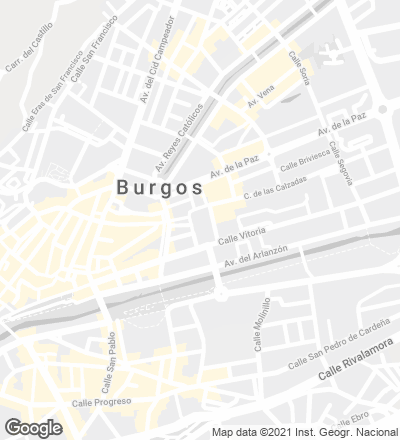 The architectural site that has reached  our days is part of a group of 11th-century  buildings around a Benedictine monastery outside the city of Burgos, a crossing point in the Way of Saint James. The church, with three naves and several chapels, was in ruins after two fires and the blowing up of the castle by French troops. The vestiges of the Gothic phase of the temple are preserved on the side walls, which are still standing. 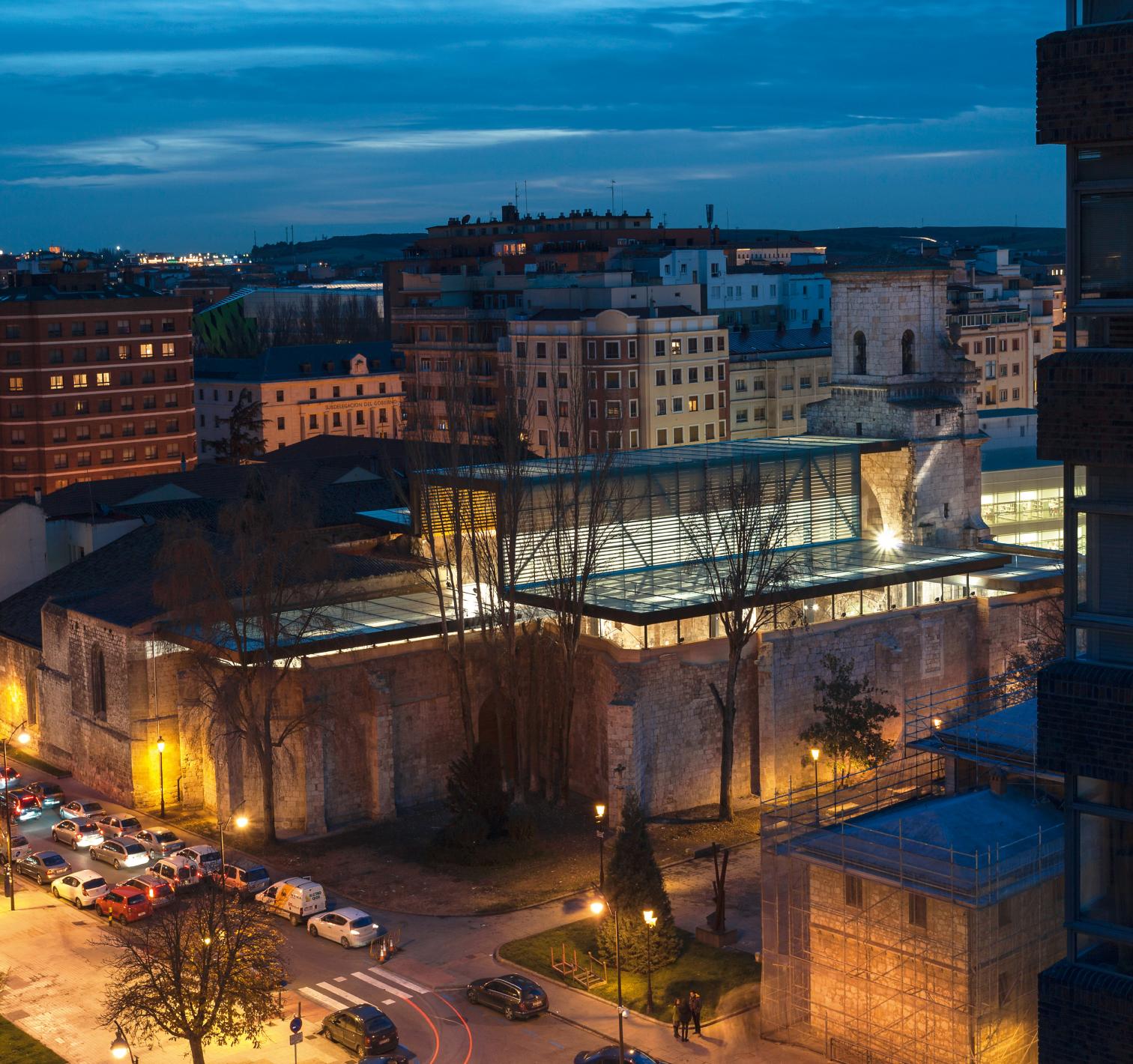 Aside from consolidating and protecting the architectural remains,  the project also furnishes the city with a new multipurpose public space, of almost 1,300 square meters, for cultural activities. 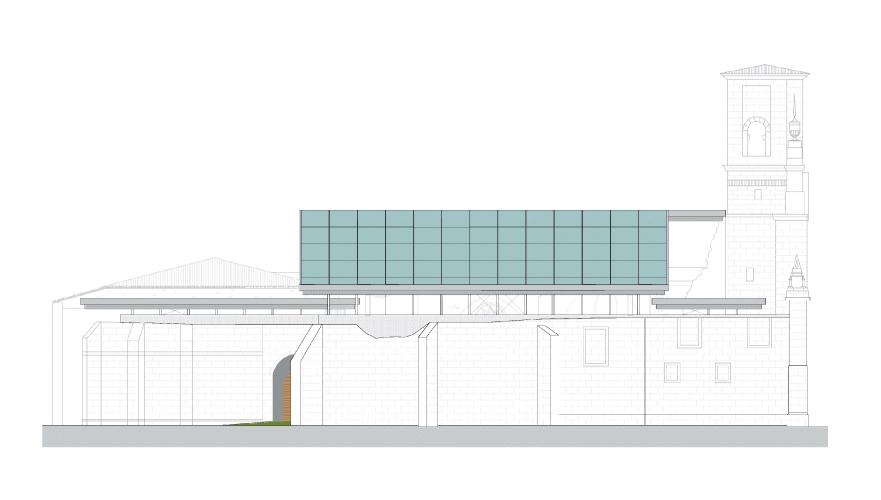 Focused only on the church, the project aims to protect the remains and, at the same time, create a new space sheltered from harsh weather. The new roof is constructed as a large folded plane that evokes the three original naves. Two horizontal planes are added to this plan, covering the apse and the northwest area. These surfaces attempt to ‘float’ above the ruin as an independent structure, without altering the perception of the architectural remains.

The respect for the existing is materialized also from the constructive point of view. To protect the remains, the roof planes stretch beyond the boundaries of the ruin, over the tops of the wall; and to avoid interfering with the archaeological substratum, the number of support points is reduced to a few columns situated in the central section. The project tries to ensure that the perception of the roof with regards to the ruin varies depending on the point of view, so that the presence of the historic structure prevails. The visual impact is thus minimized from the access, while from the rear part of the monastery, towards the contemporary city, the roof surfaces appear more prominently. 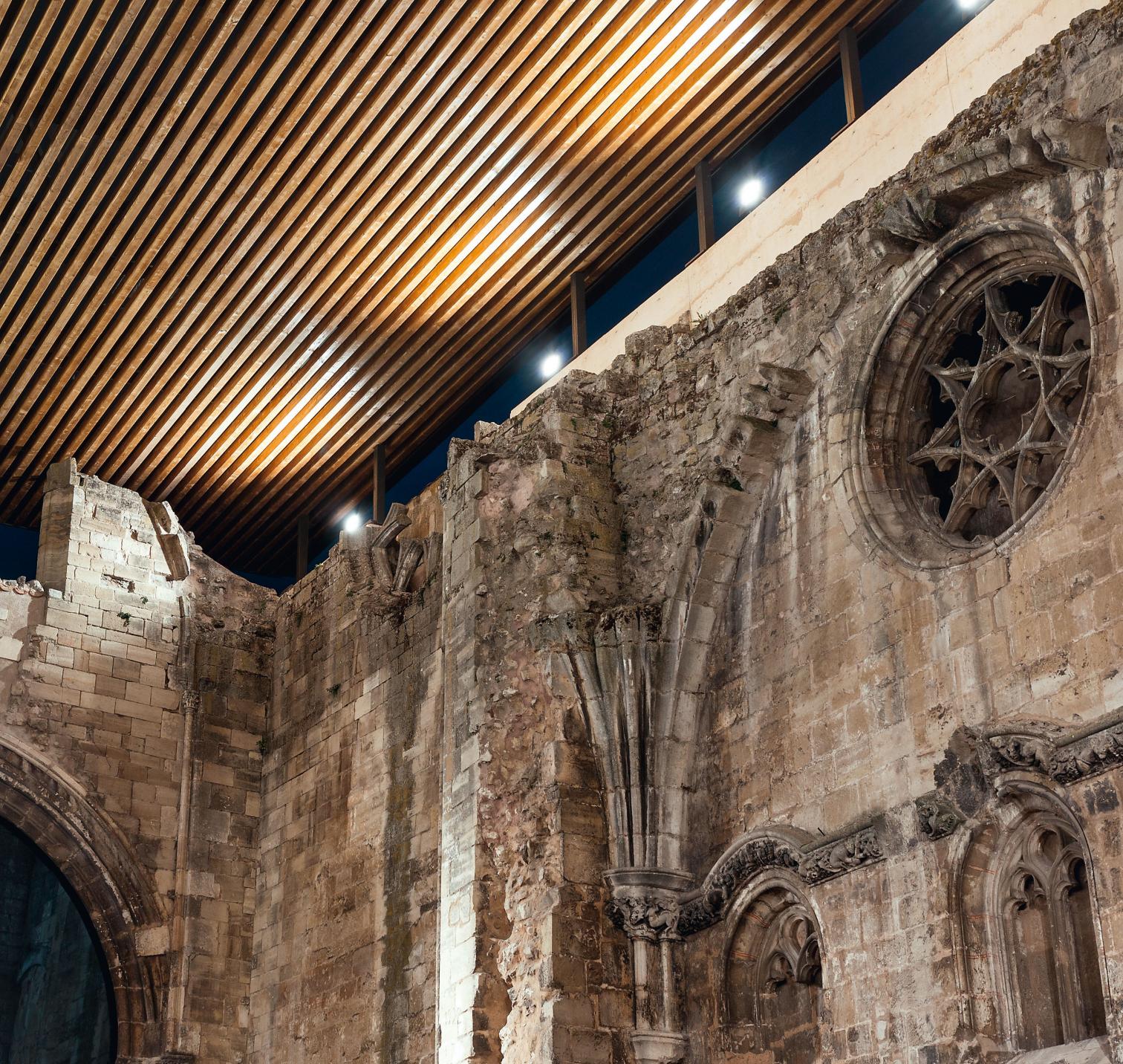 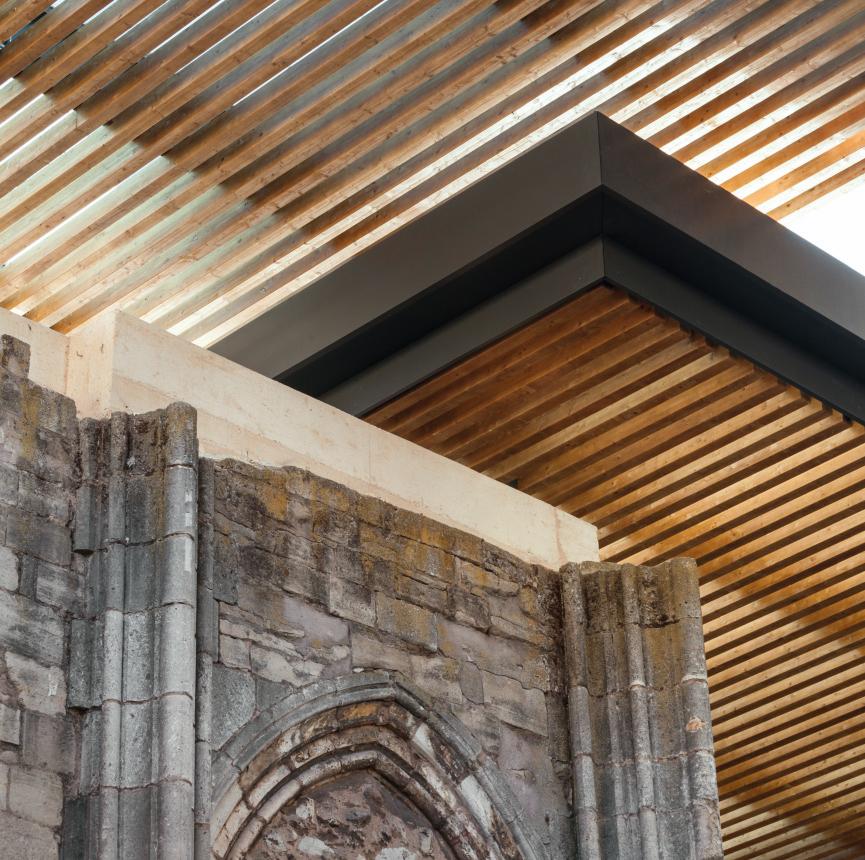 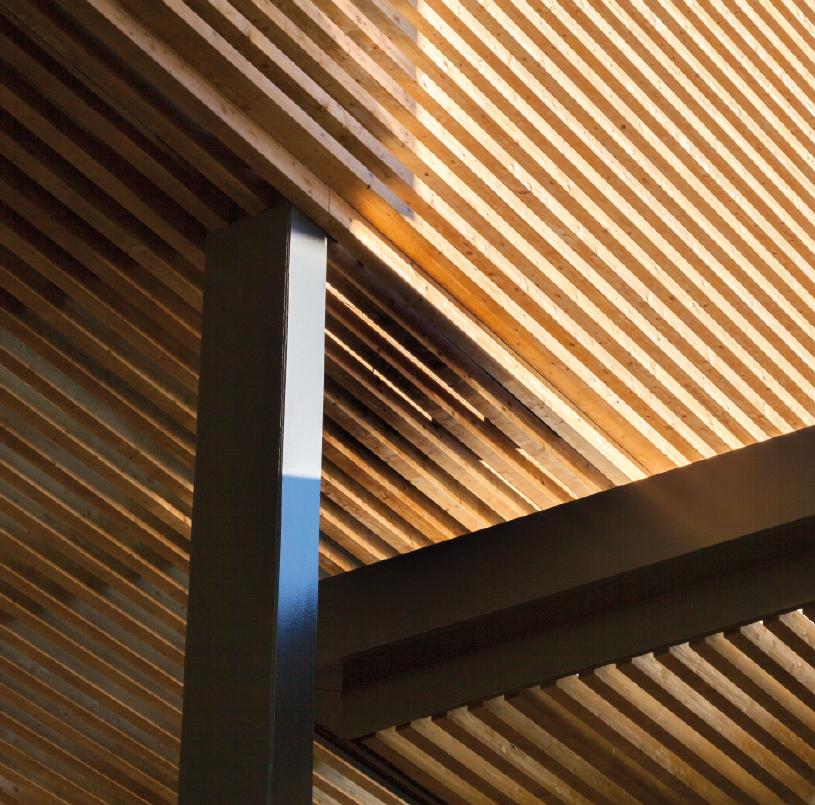 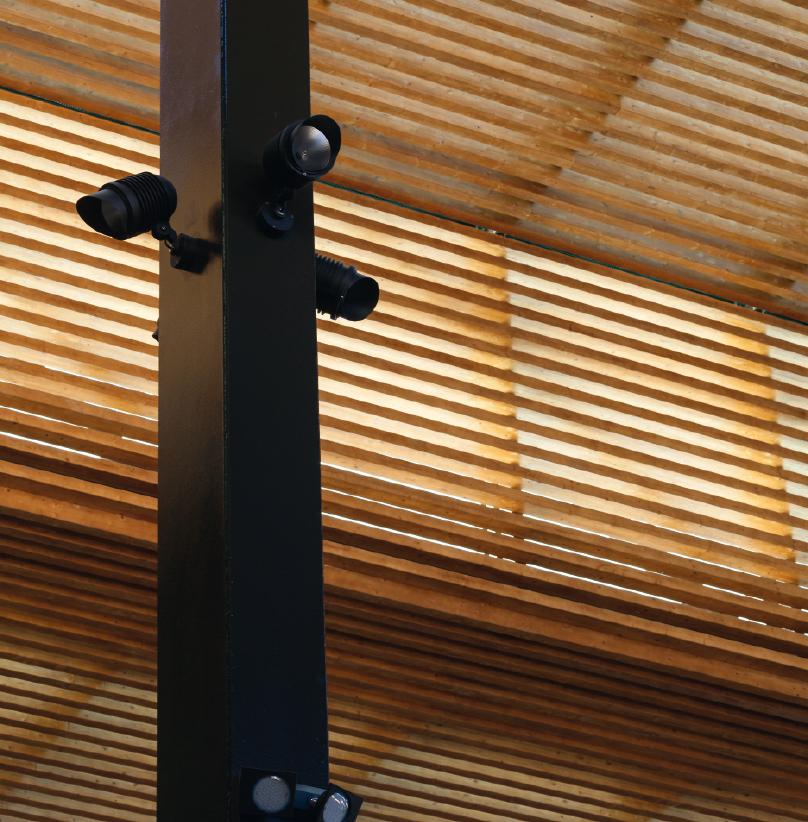 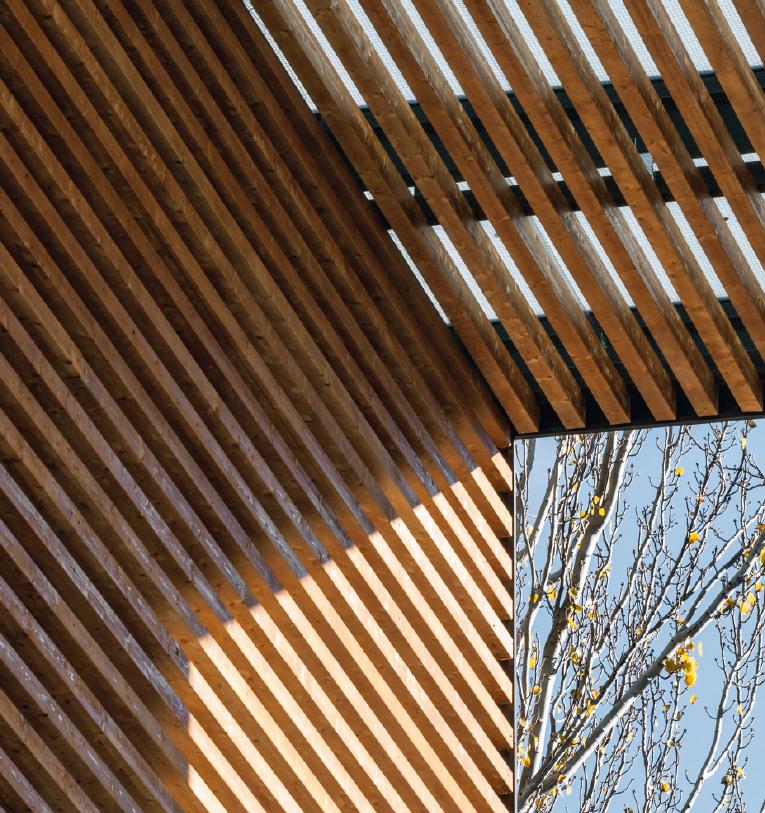 The finish of the roof surfaces is the same, with different criteria for the interior and the exterior. The structure of laminated steel profiles is concealed on the outside by the cladding of translucent glass, and on the inside with a lowered ceiling of wood strips. Both the glass and the lattice filter light creating a scenographic effect. Wood is the material used to mark the transition between the church’s character as a ruin and the contemporary composition of straight lines and glazed enclosures. 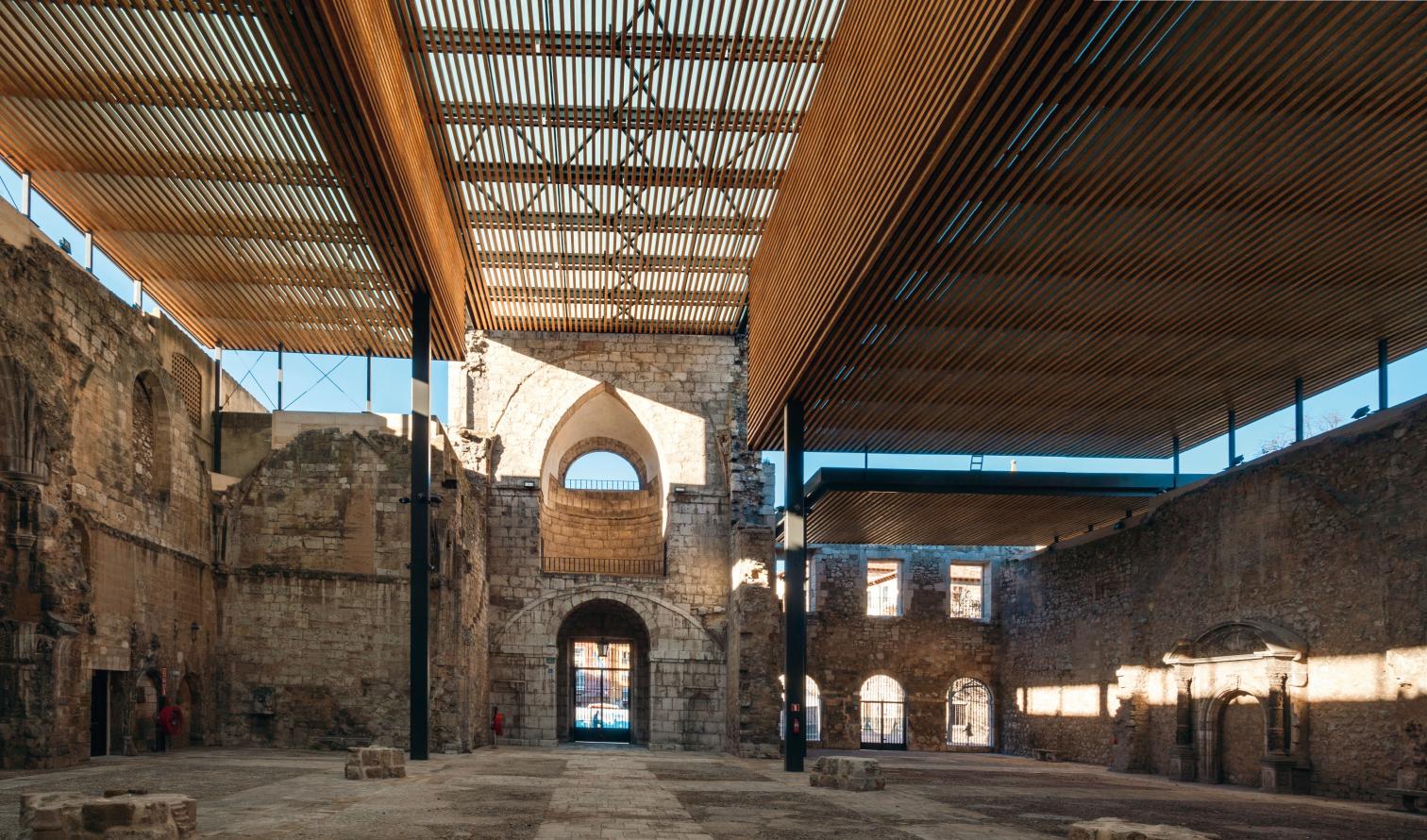 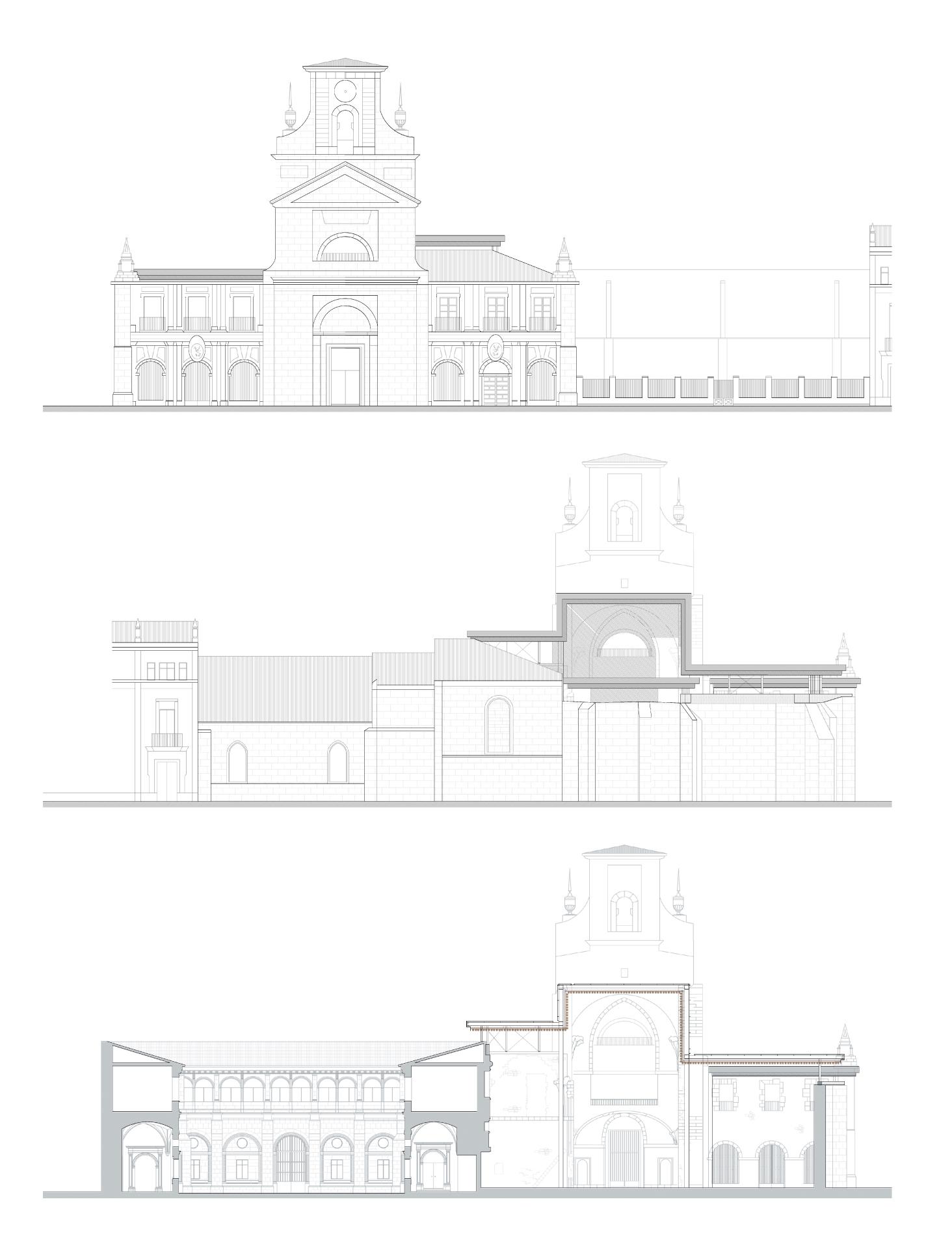 By reducing the number  of supports, the interior  of the church offers  a clear reading of what is left of the monument, because there are practically no elements concealing the details of  the pilasters or facades. 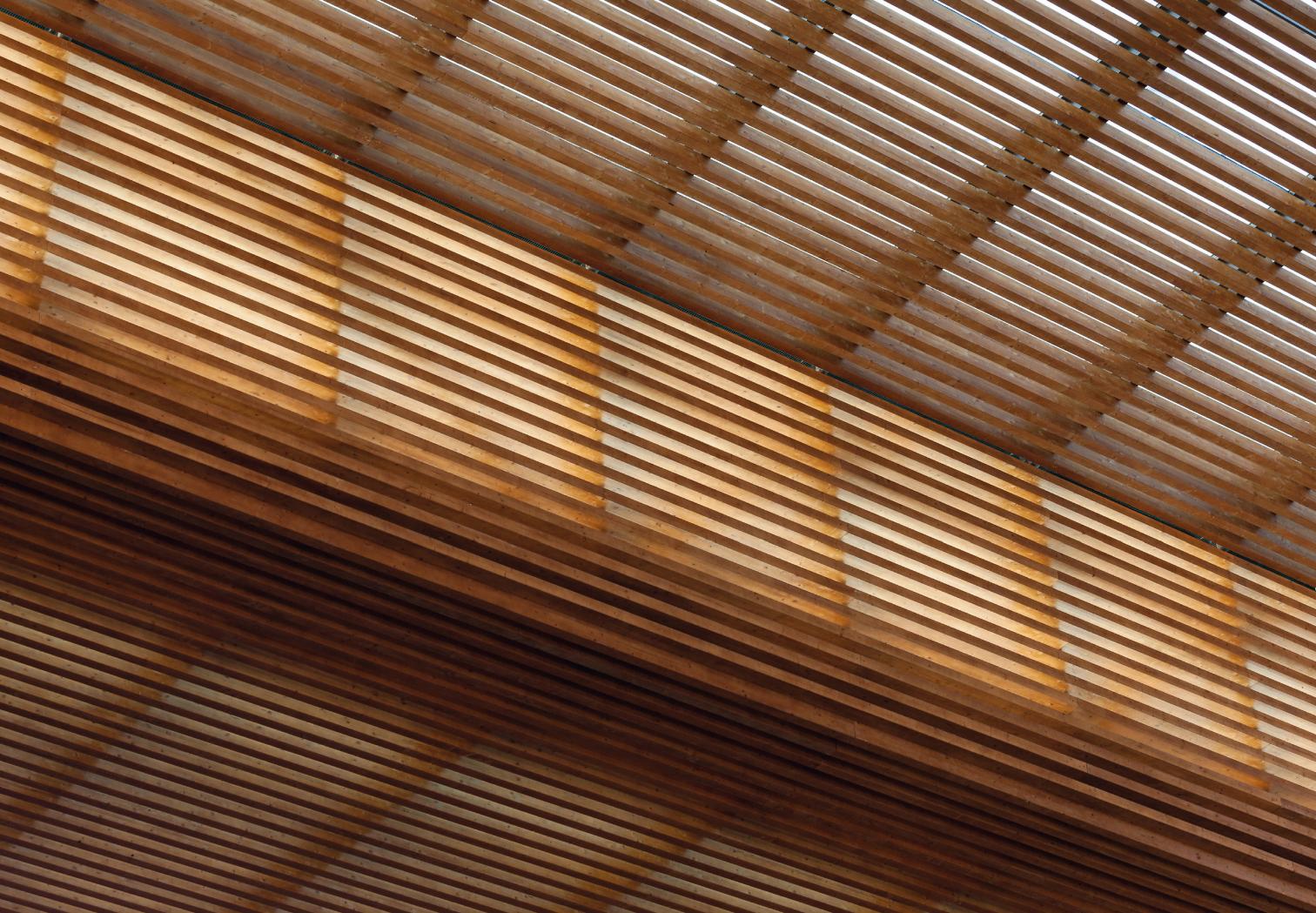 Lighting is a key element in underscoring the space’s value. During  the day in the form of filtered sunlight, and  at nighttime with direct light on the remains  and general lighting on the wood surfaces.

Lighting is an essential element: during the day sunrays are filtered through the roof, at night direct light illuminates specific areas of the ruins and ambient light is indirectly cast on the wood surfaces; the folding plane of translucid glass, lit from within, is a lantern that unveils the intense activity taking place inside. 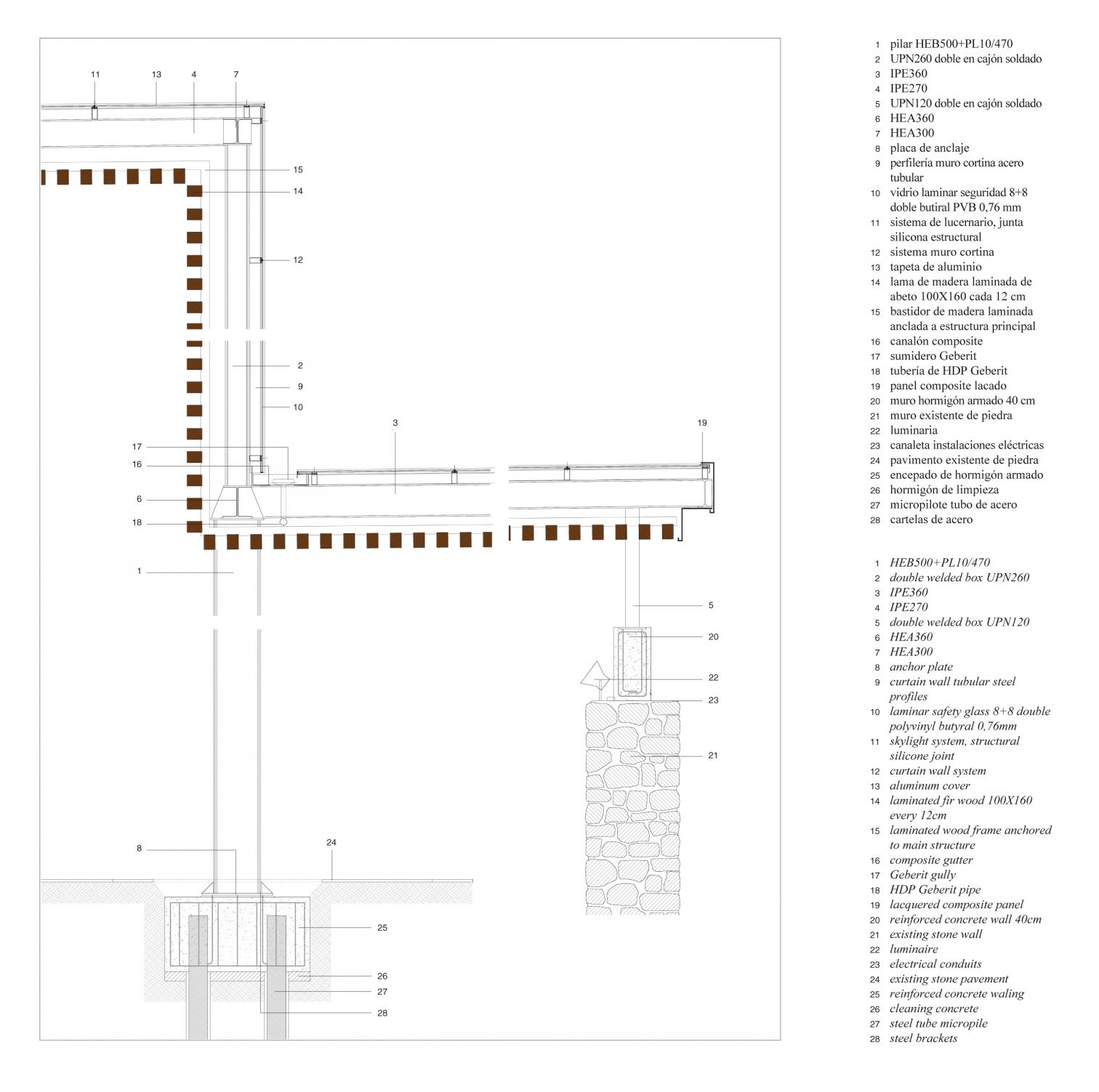 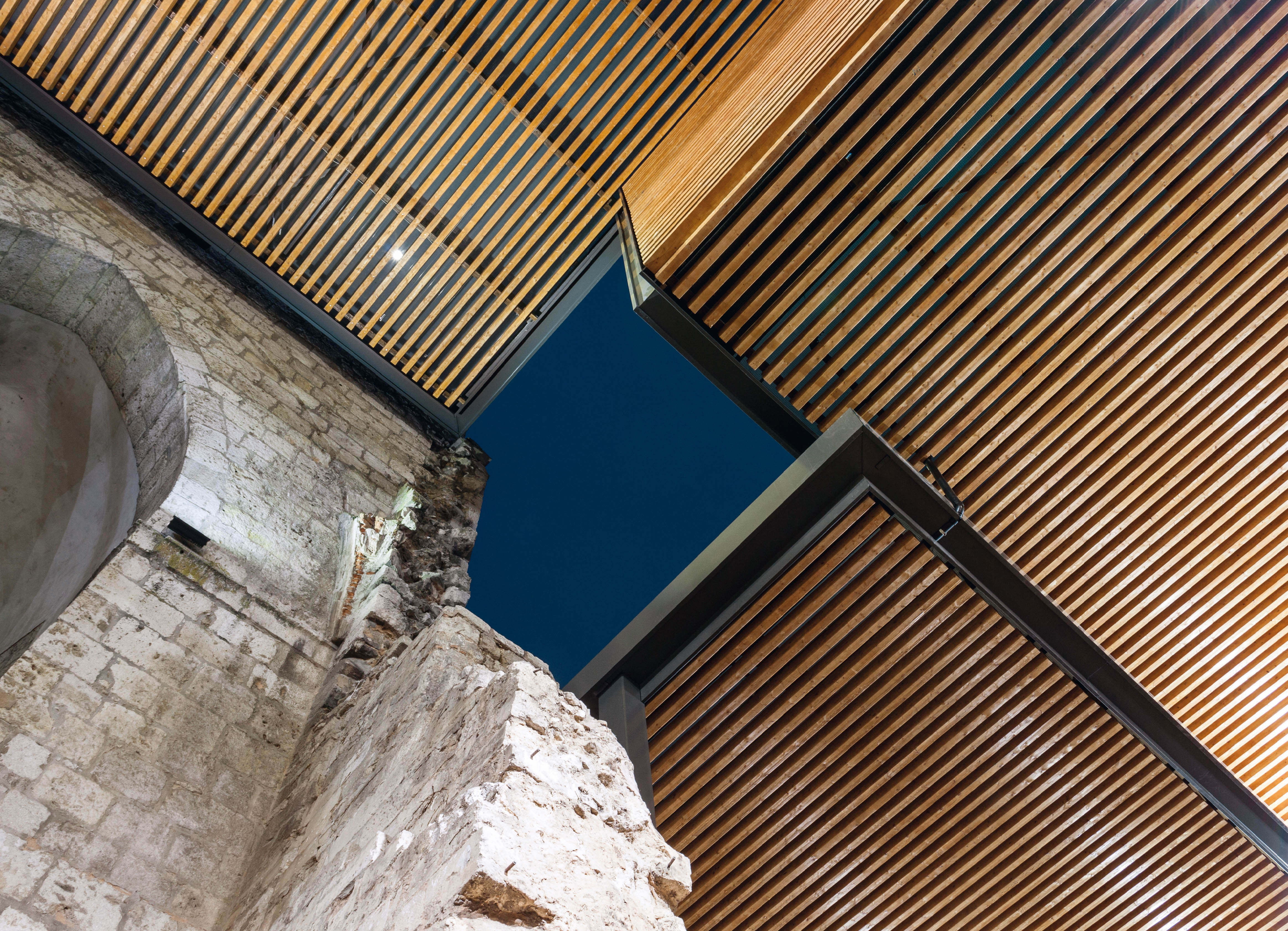 ODImásP   Spain   The vast Castilian landscape is necessarily linked to the stone fortresses that dot its horizon like silent sentinels. In view of the difficulties that the maintenance of this heritage entails, there are numerous initiatives which follow the purpose

The Cádiz architect Francisco Reina has been slated to refurbish the 18th-century Royal Artillery Factory in Seville, for it to harbor 9,500 square meters of exhibition spaces, laboratories, and offices serving the Magellan Center for Ventures in Cul

AleaOlea arquitectura i paisatge   Spain   Santa María de Vilanova de la Barca is a Gothic church of the 13th century that was partially destroyed in 1936 during Civil War bombings. Since then the building has remained in a state of neglect and only the east facade, some fragments of the aisl

César Ruiz-Larrea Antonio Gómez Gonzalo Ortega   Spain   An old house on Recoletas street was chosen to accommodate the new headquarters of theInstitute of Architects (‘colegio’), in Gijón. Among the main asssets of the old building was its thick perimetral wall, which effectively spans the unevenness of t