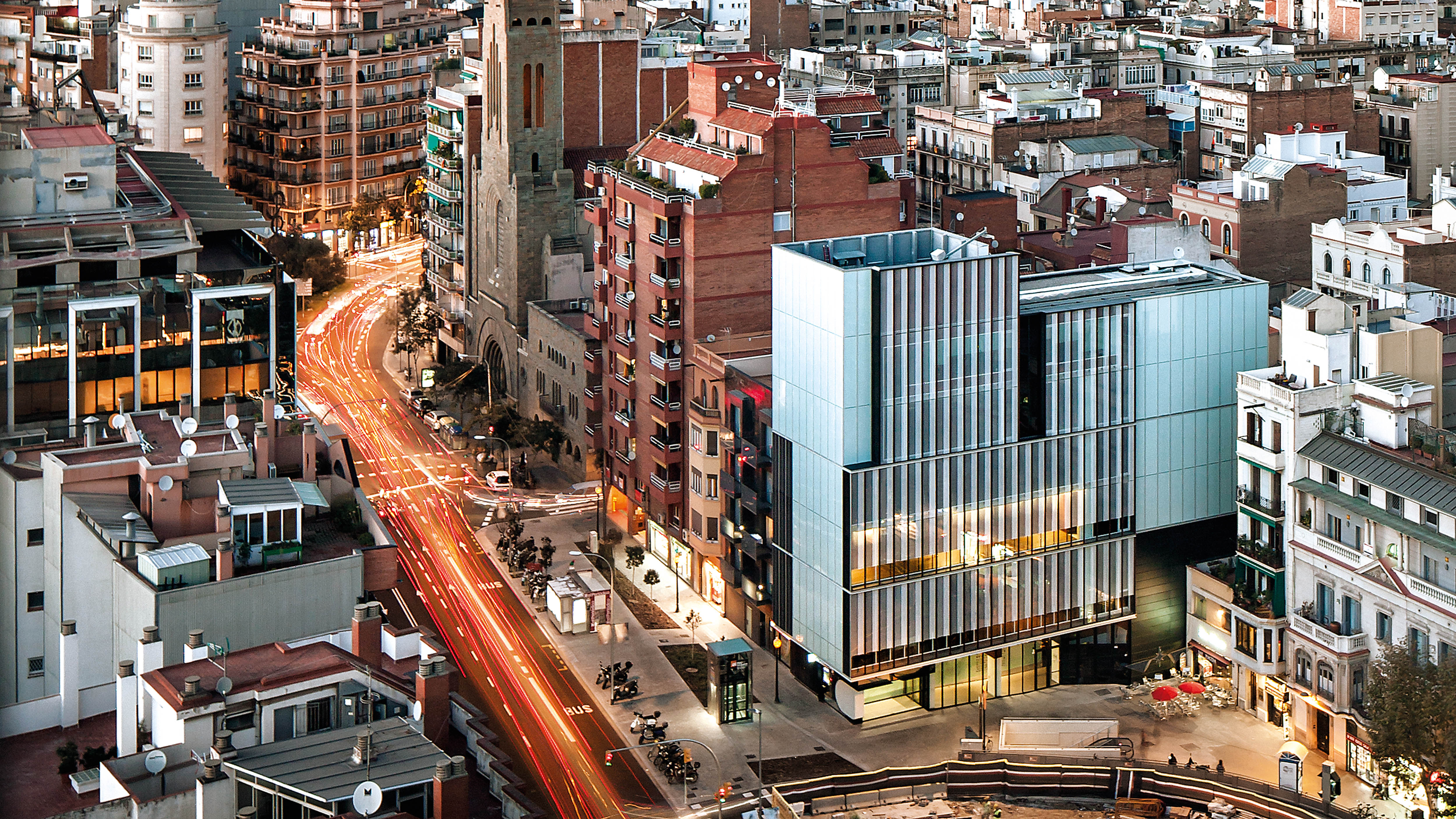 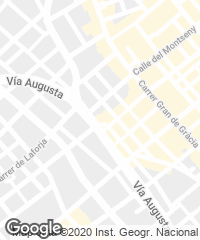 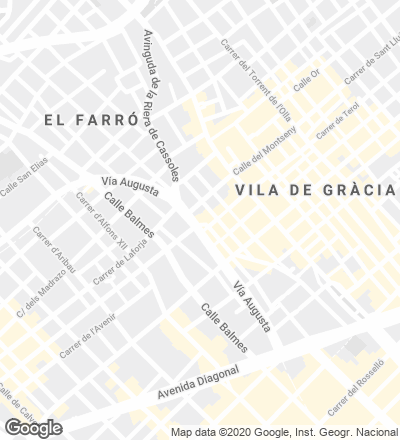 The new building goes up on a narrow plot (32 meters of facade) on Gala Placidia square, facing a tree-lined and pedestrian space by Vía Augusta. The design focusses on three basic aspects: visibility, convertibility and communicability. 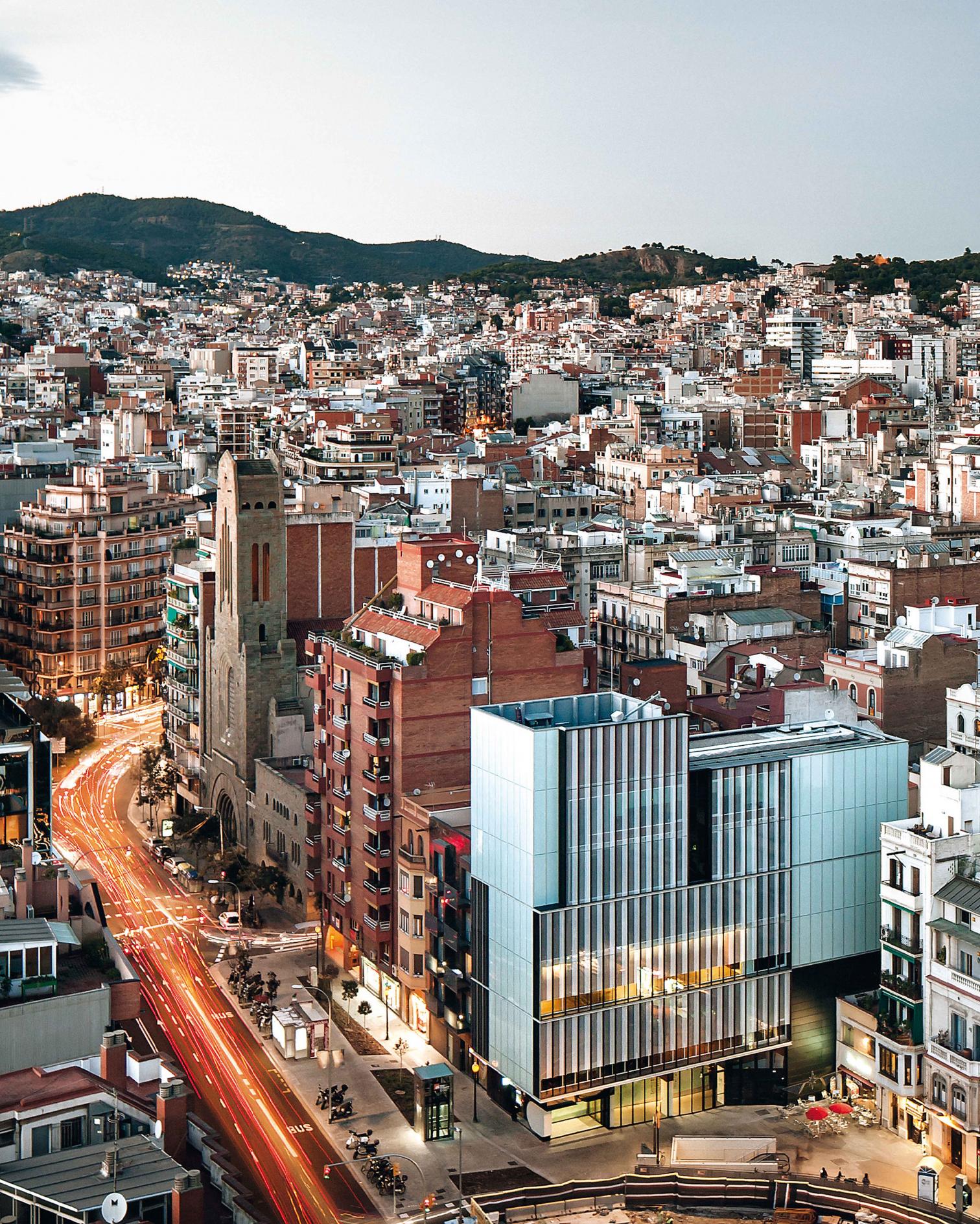 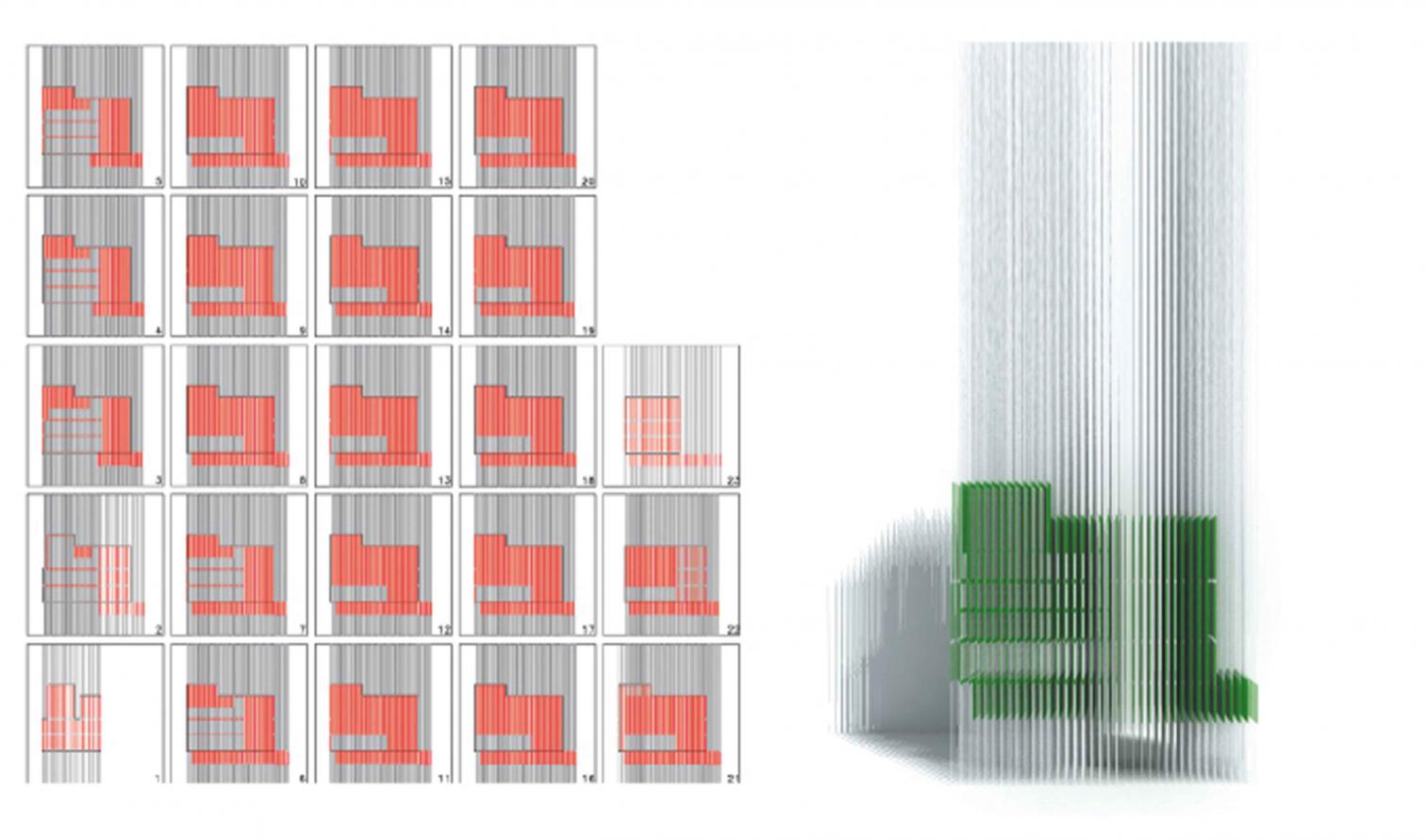 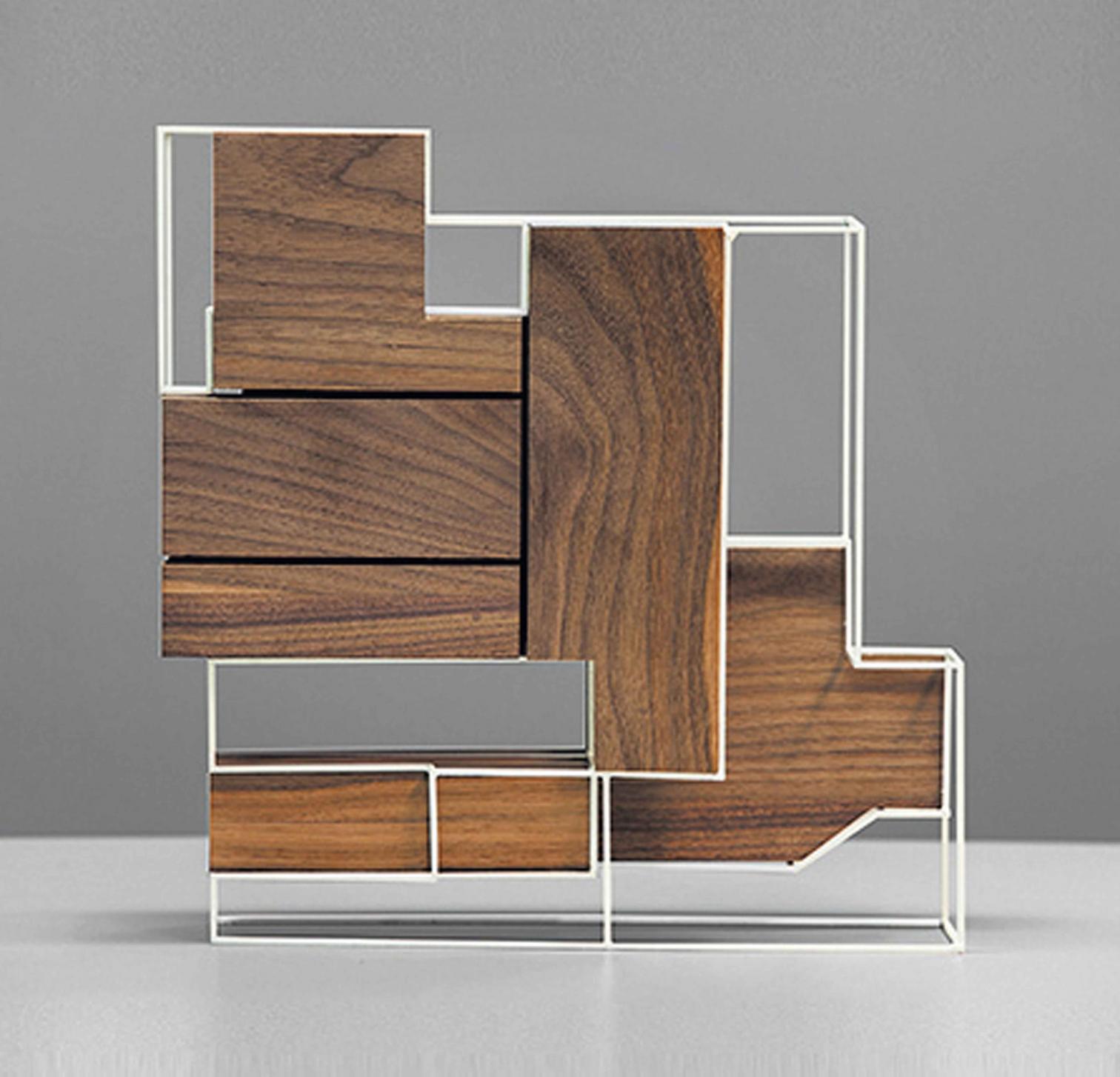 The different program functions are stacked in double-height boxes; the lobby, waiting areas and circulation paths are laid out along the facade, so from the plaza one can see what is going on inside the building. 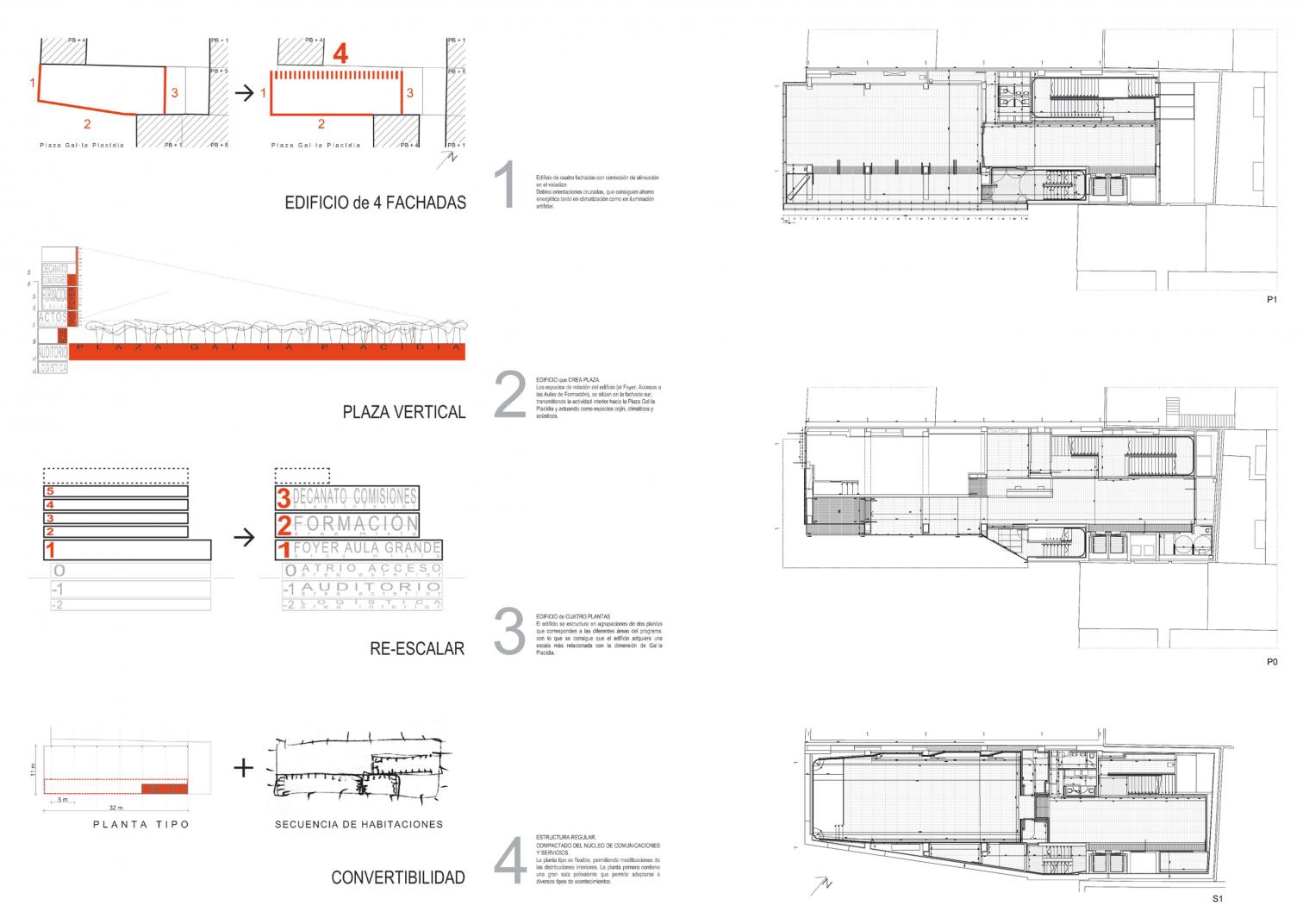 The program is organized in six levels and two underground ones, with different zones: the presentations area (with an assembly hall for 150 people and a multipurpose one for 100); the training areas; and the administration and dean’s offices. By grouping the different functions in a double order, the buildings looks like a superposed sequence of double-height boxes. The lobby, waiting areas and circulation paths of the different floors run along the longitudinal facades, looking onto the square, so that the activity inside becomes the real facade of the urban piece, especially at night, through the selective lighting of the different functional bands. 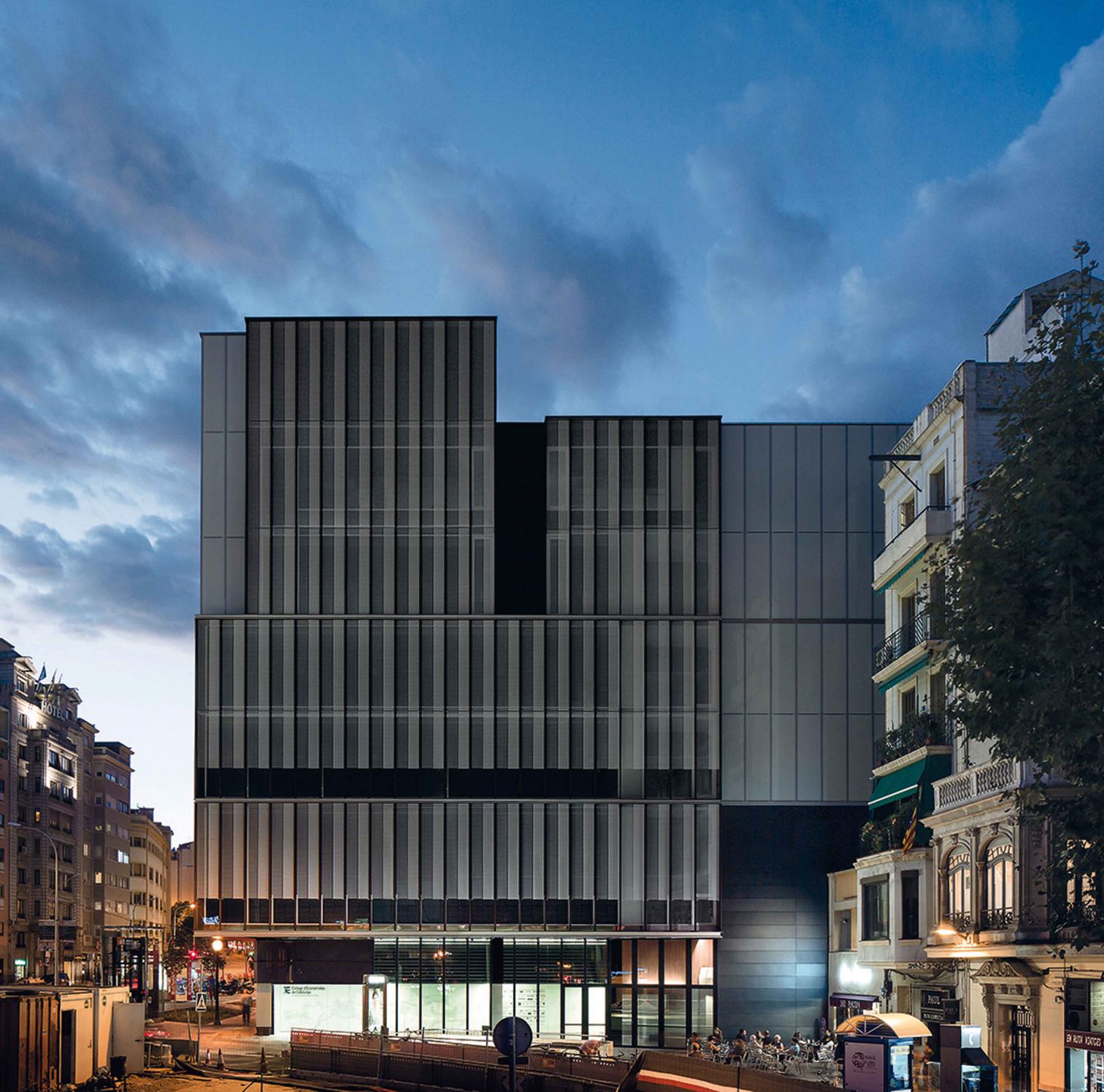 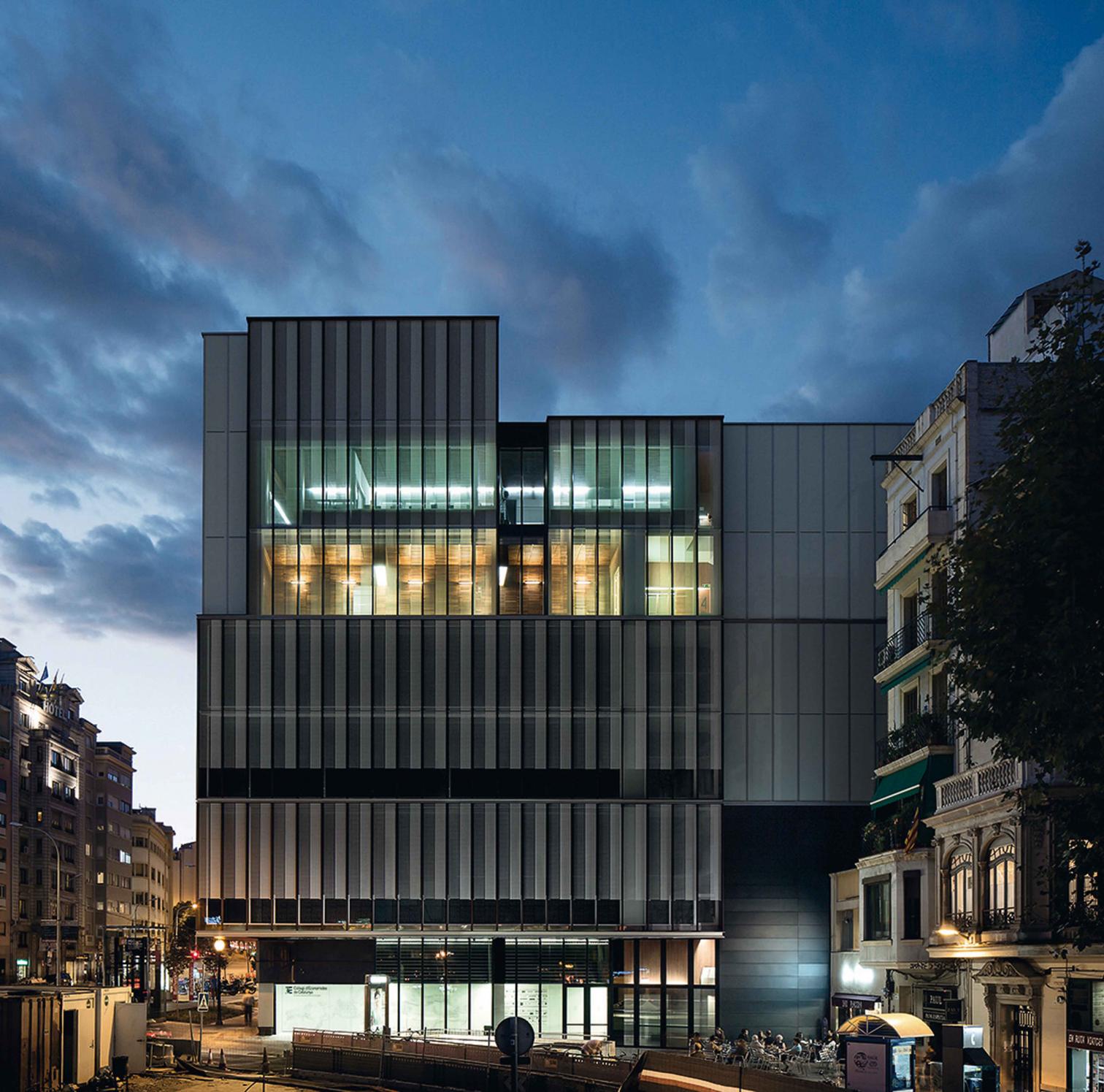 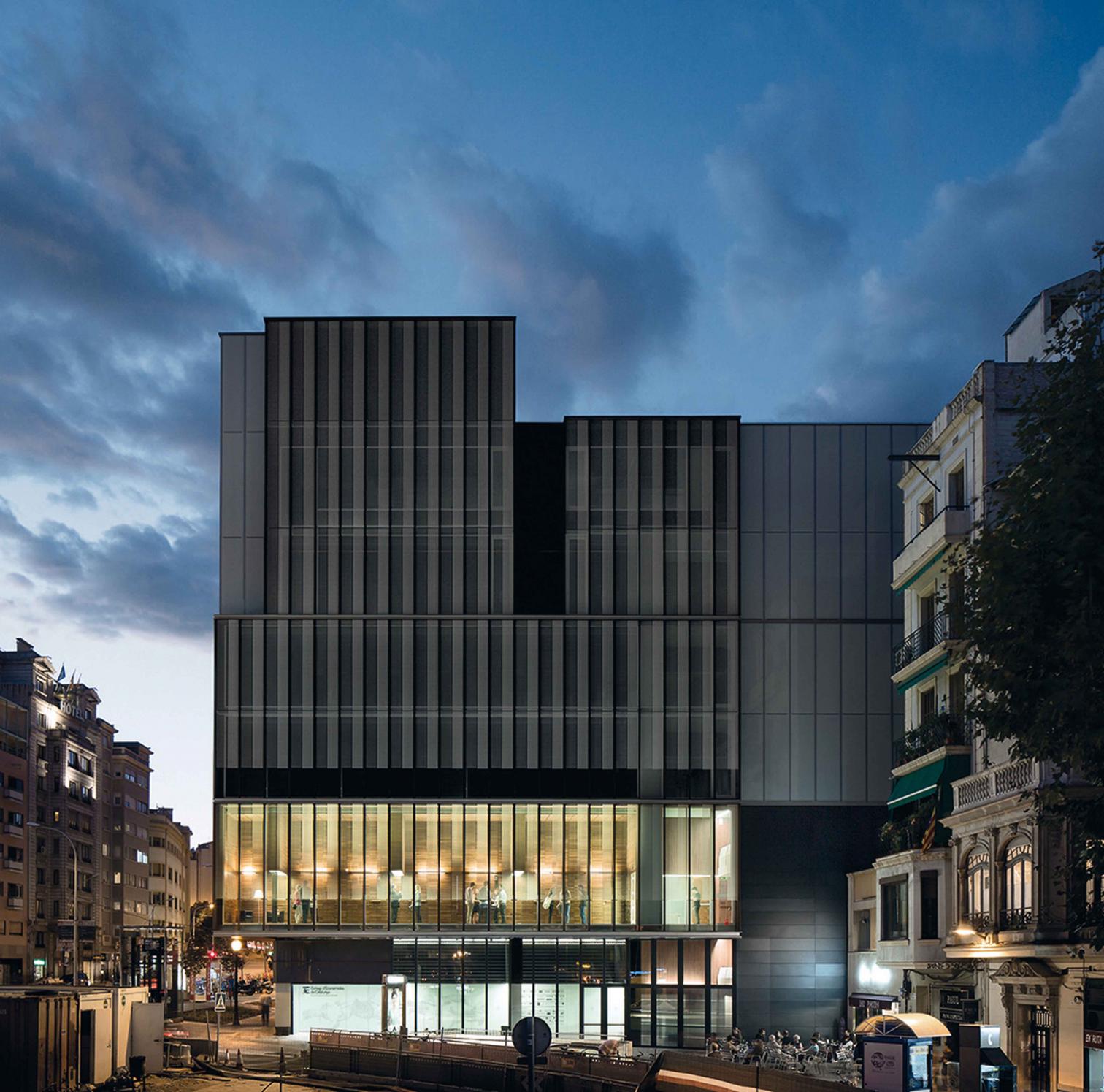 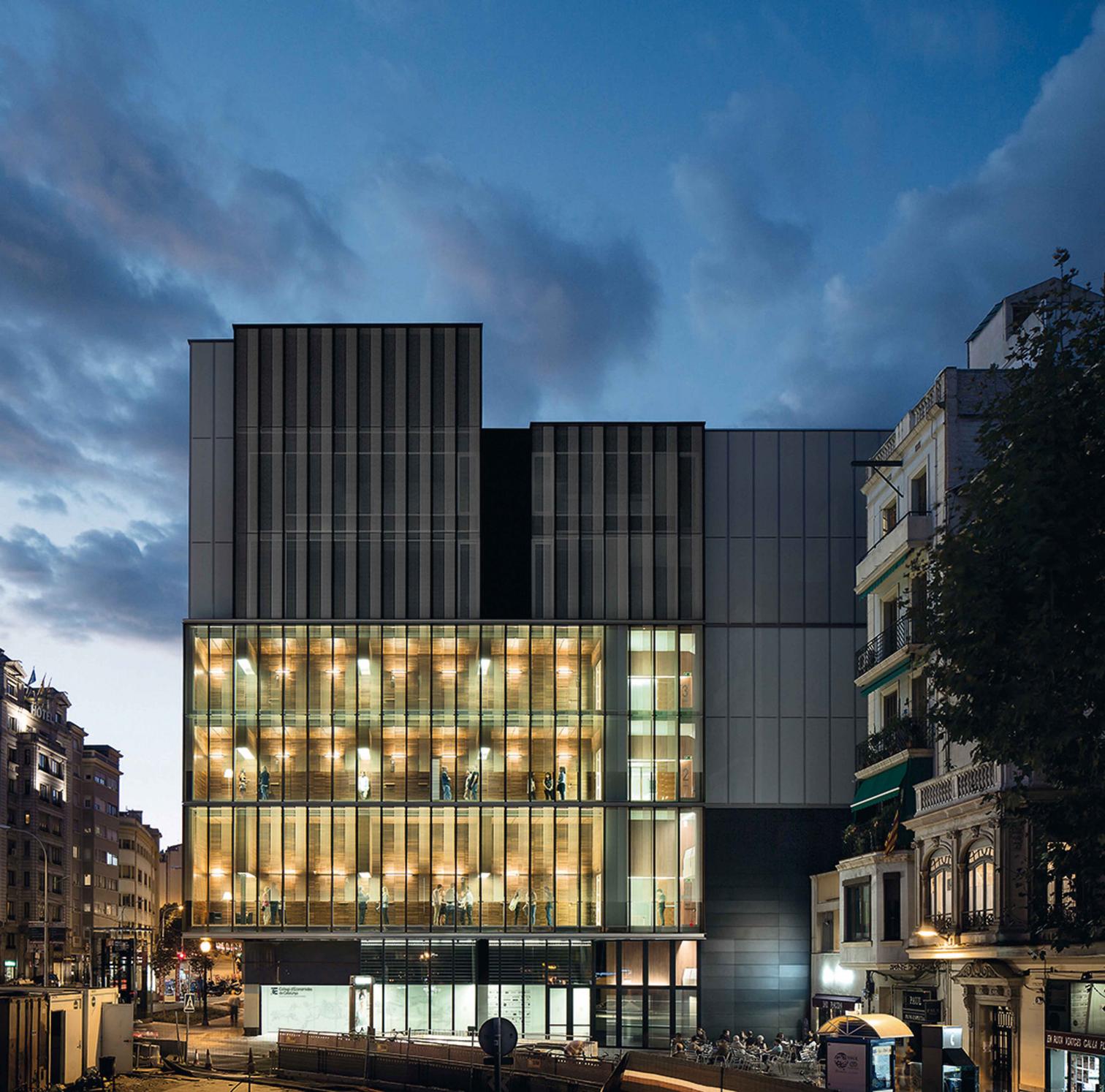 Aside from giving the building visibility and communicability, these spaces perform as climatic and acoustic cushion. The enclosure takes on an active role in the energetic balance without interfering with interior lighting. It is constructed as white, clear glass modules, translucid or opaque depending on the orientation and program demands. A double skin of modular glass for the south facade coincides with the lobby spaces and with the staircase shafts. A steel silver-toned skeleton maintains the two glass surfaces separated by 50 centimeters, letting air circulate between them. The outer surface is the actual facade, silkscreen printed with the opacity set to 50%; the interior surface constitutes the inhabitable limit, and is fully insulated. 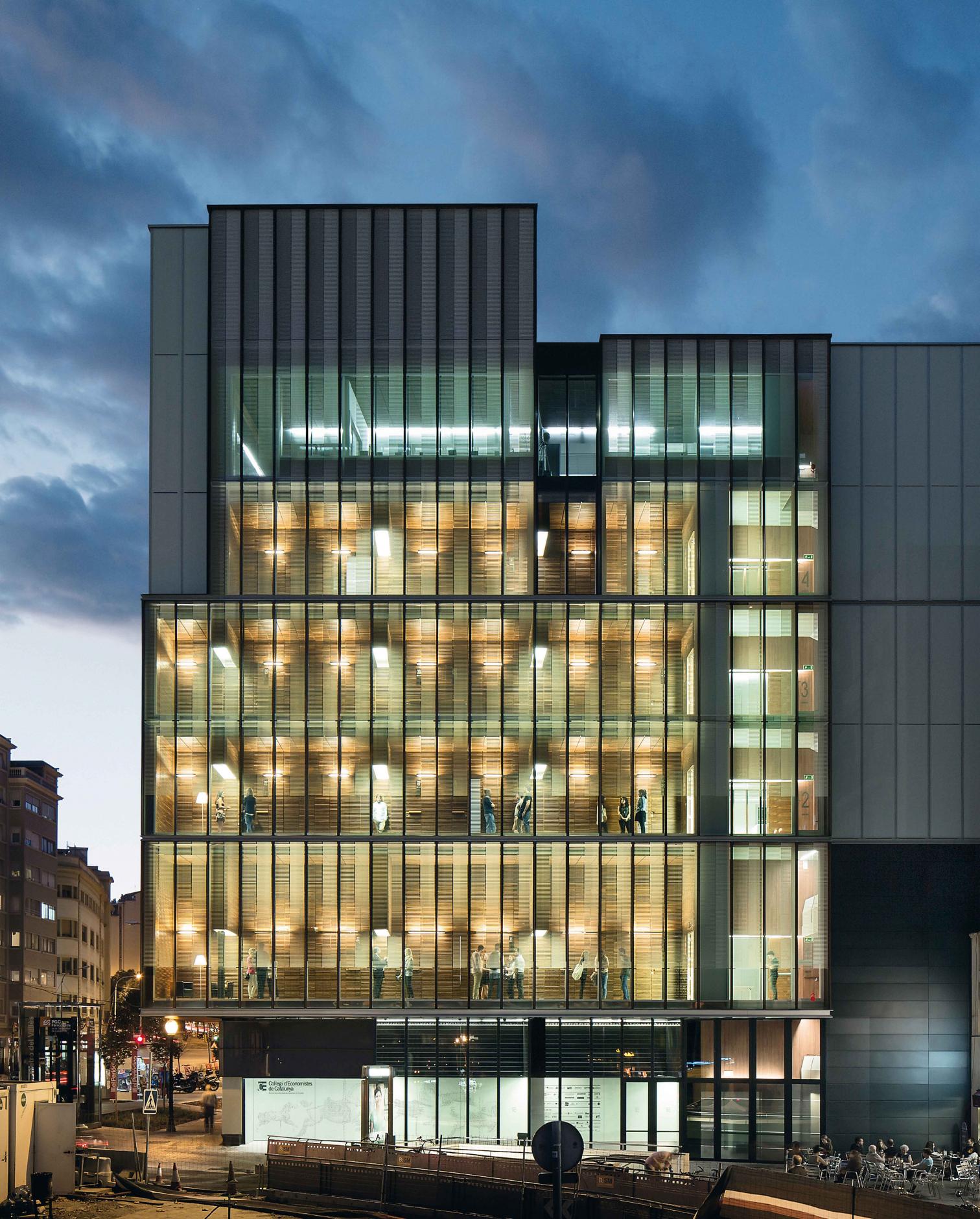 To ensure convertibility, the scheme includes a column-free warehouse, of 32x 10.5 meters, evoking a Japanese house, where the textile and glass partitions organize the interior spaces. The structure’s uniformity and the compact character of the vertical communications core further emphasize this aspect. The different elements of the program are organized in boxes within boxes. The exterior glass box contains smaller ones. Following the principle of facade modulation, three materials complete the interior boxes: glass, steel and wood. Wood is for the spaces with a prominent role: lobbies, stairs, assembly hall, meeting room... The pavement complements the boxes with pieces of 100x15 centimeters, inspired in the Japanese tatamis. 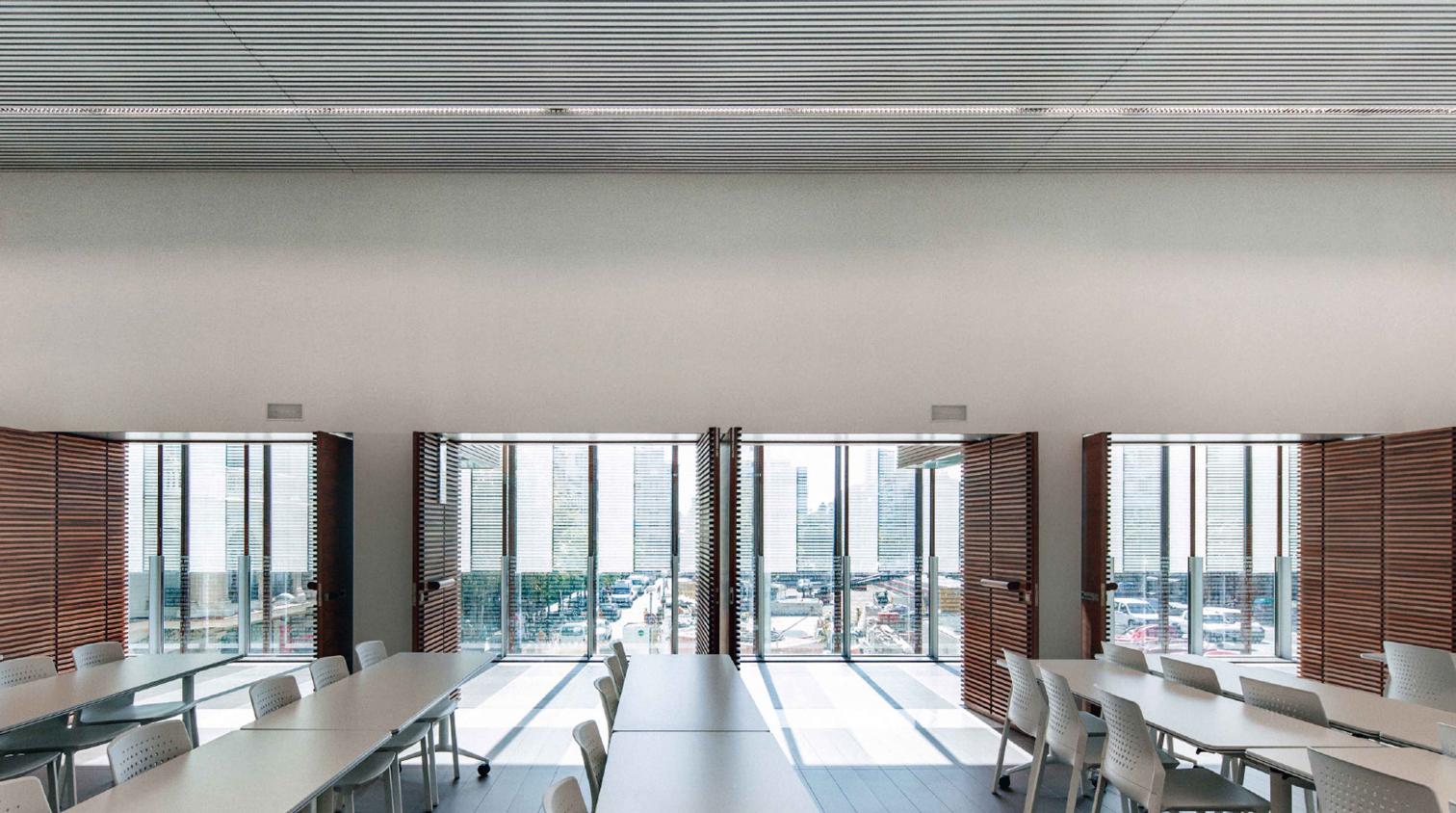 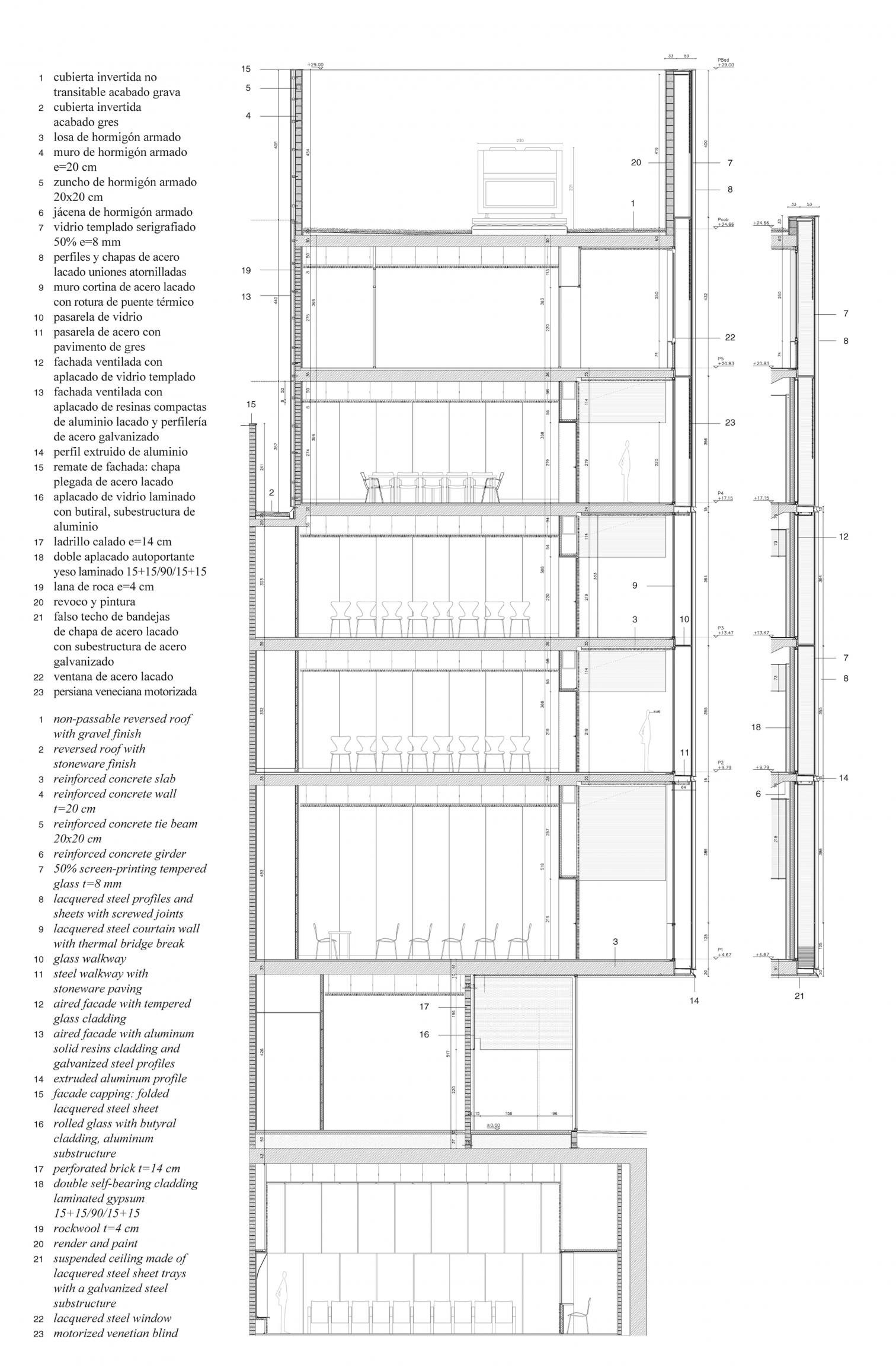 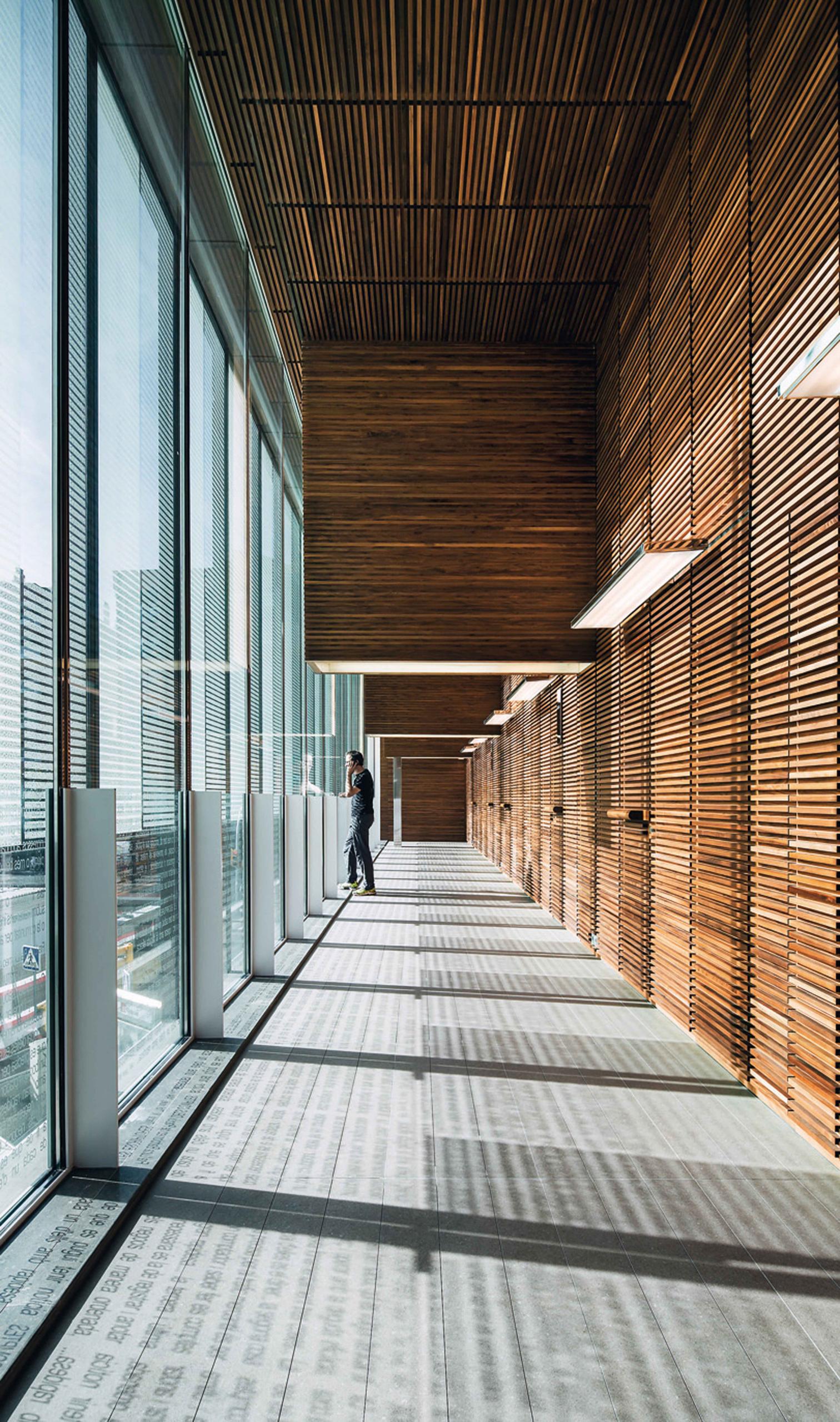 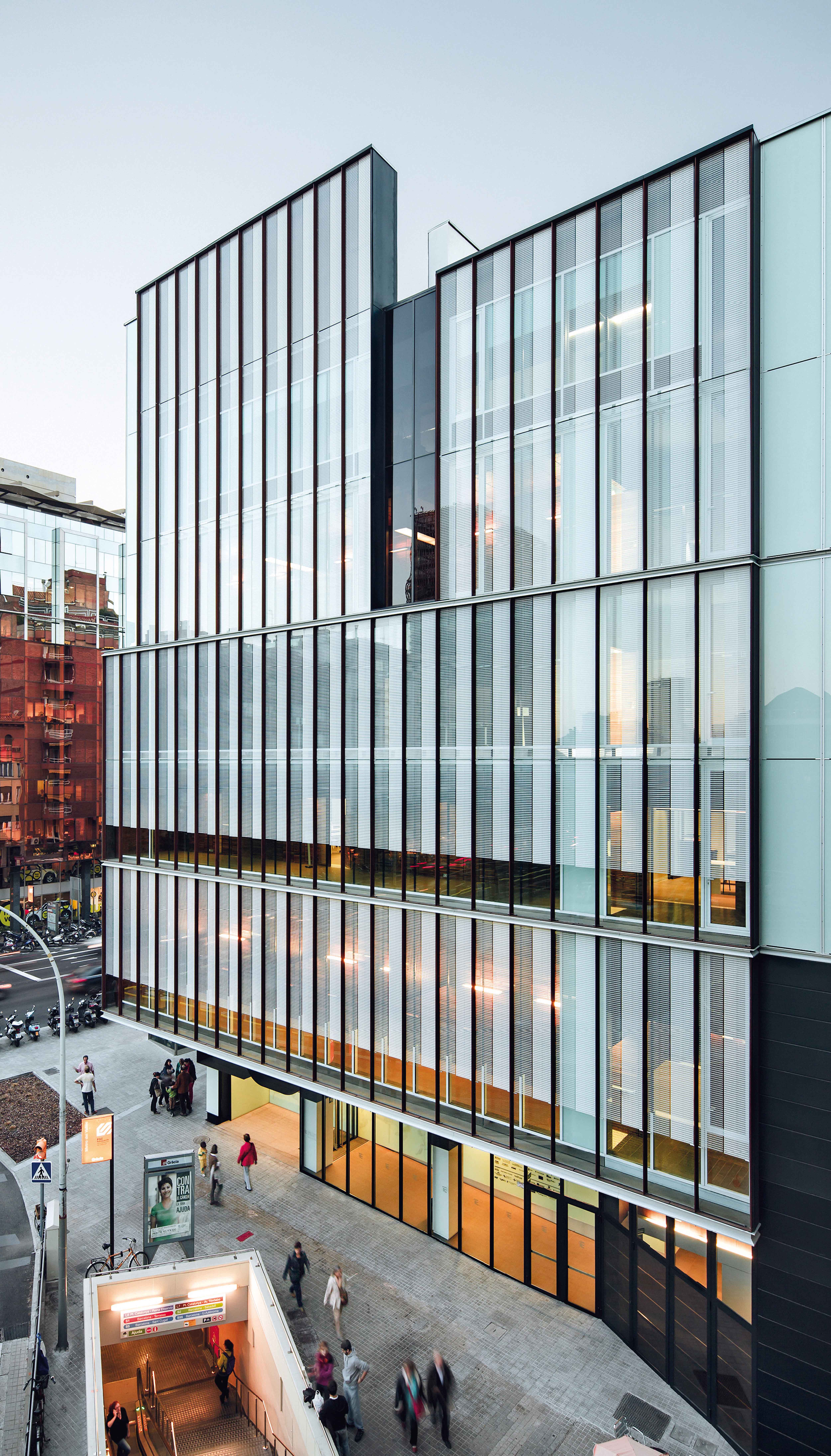 Roldán + Berengué   Spain   The project transforms the old fire station on Lleida Street, built for the 1929 International Exposition, including it in the cultural network known as ‘Montjuïc, Museum Mountain.’ The original building – the first raised for this purpose in Spain –

Roldán + Berengué   Spain   The old textile complex is being recovered to join the Barcelona Art Factories network, adding 28,000 m² of public space and, for the first time in this type of intervention, of social housing. Built in 1905 to store thread, the warehouse is 100x15

Roldán + Berengué   Spain   The commission involved turning Hotel Montecarlo into a retail, office, and residential building, adapting its historical elements to the new uses and in the process upgrading them. Presenting two fronts of different urban character, the building sew

Mercè Berengué   Spain   Plaza Europa is a large public space open on either side of Gran Vía del Hospitalet Avenue, which gathers, among other buildings, 26 towers of tertiary and residential uses with heights ranging from 11 to 28 floors. The high-rise buildings do not ne

ACXT Arquitectos   Spain   The archive is located on María Díaz de Haro street, near Bilbao’s main street, on a plot between party walls measuring 20 meters wide and 70 meters deep, belonging to one of the urban blocks in the expansion areas of the city. Below grade, the build

Among the numerous challenges of architecture in this day and age is to redensify and repurpose the industrial fabrics that cropped up and grew on what were then the outskirts of our cities, but which are now embedded and trapped in the very heart of

Facade of the Town Hall, Manresa

The new project to be carried out by the British firm Foster + Partners in Madrid, given the name ‘Axis,’ will transform the old Barclays Bank offices at the juncture of Plaza de Colón into a mixed-use building. It will be taller and the elevations w

Miralles Tagliabue EMBT   Spain   With the desire of recovering its historical roots, the company Gas Natural has builtits new headquarters in the Barceloneta, on the same site where the first gas factory in Spain used to stand 160 years ago. As a living creature that reacts to exte 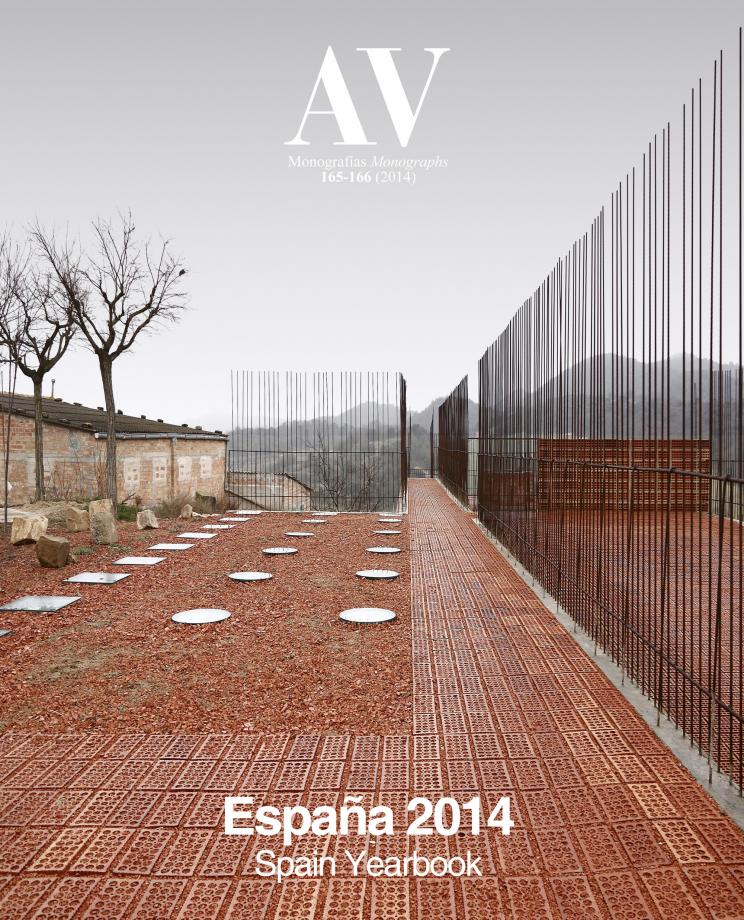