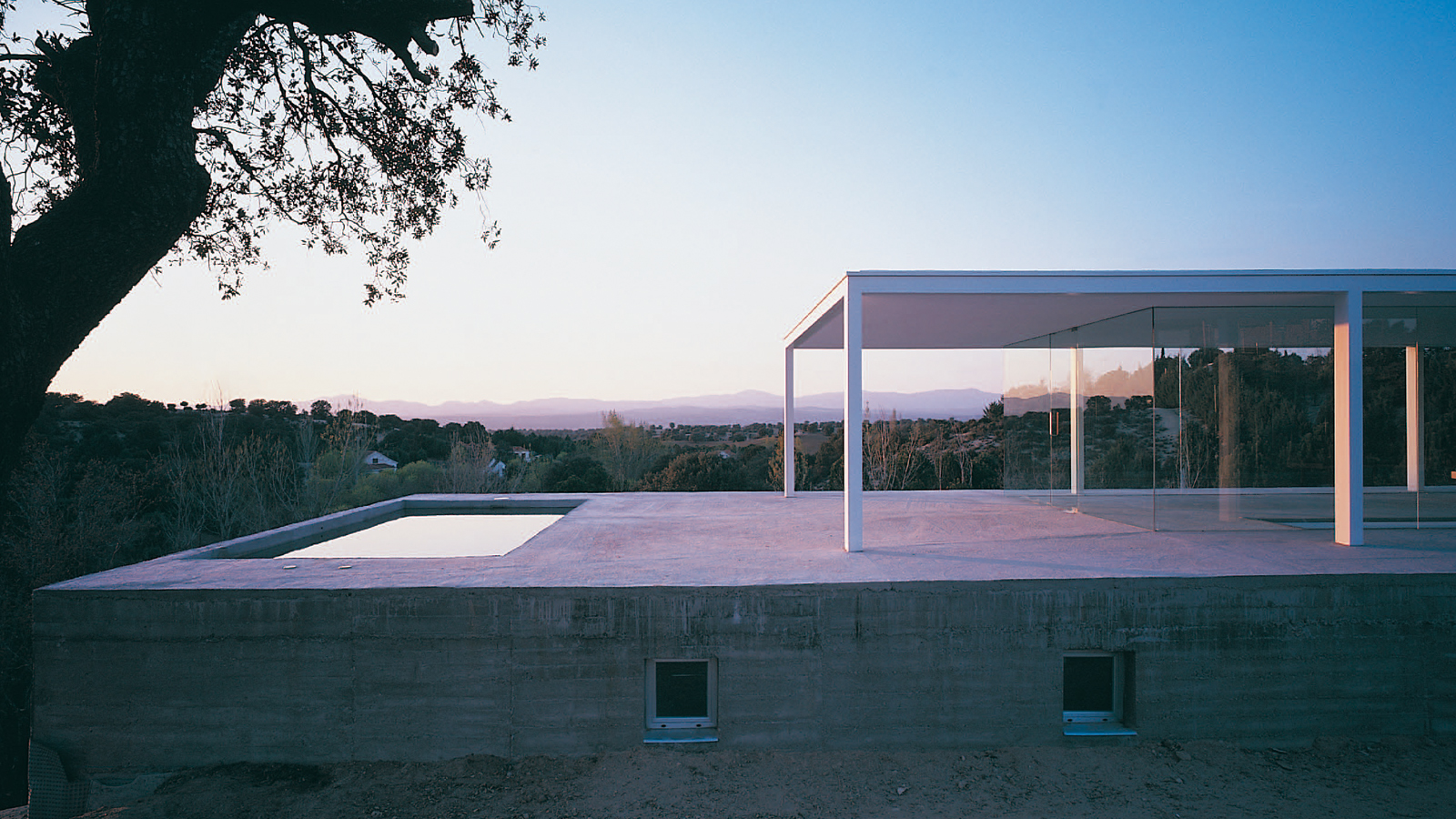 A rugged spot in the province of Madrid, outlooking the Sierra de Gredos, was the site chosen by a family to build their house. Renouncing to transform the place into the tame landscape of grass fields common to residential developments, the project was undertaken as an addition of the basic mechanisms that man originally used to secure a favorable habitat amidst an almost always hostile environment. 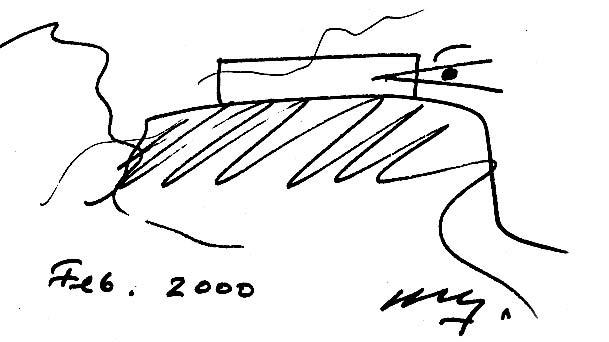 The hills, the trees and the distant profile of mountains were the starting point of a process of domestication of the surroundings that began with the design of a platform to make the steep hill traversable, affording at the same time superb views of the grove. The rock is dug out under this horizontal plan to protect from both heat and cold. An elementary construction on the platform ensures protection from rain, while a thin glazed skin shields this viewpoint from wind. Hence the hill becomes inhabitable, with no intention whatsoever to reflect or merge with the organic forms of the surrounding nature.

The house is an addition of mechanisms to make a hostile environment inhabitable: a space dug out in the rock to shelter from the cold, a roof to avoid rain and a glazed box to protect oneself from the wind. 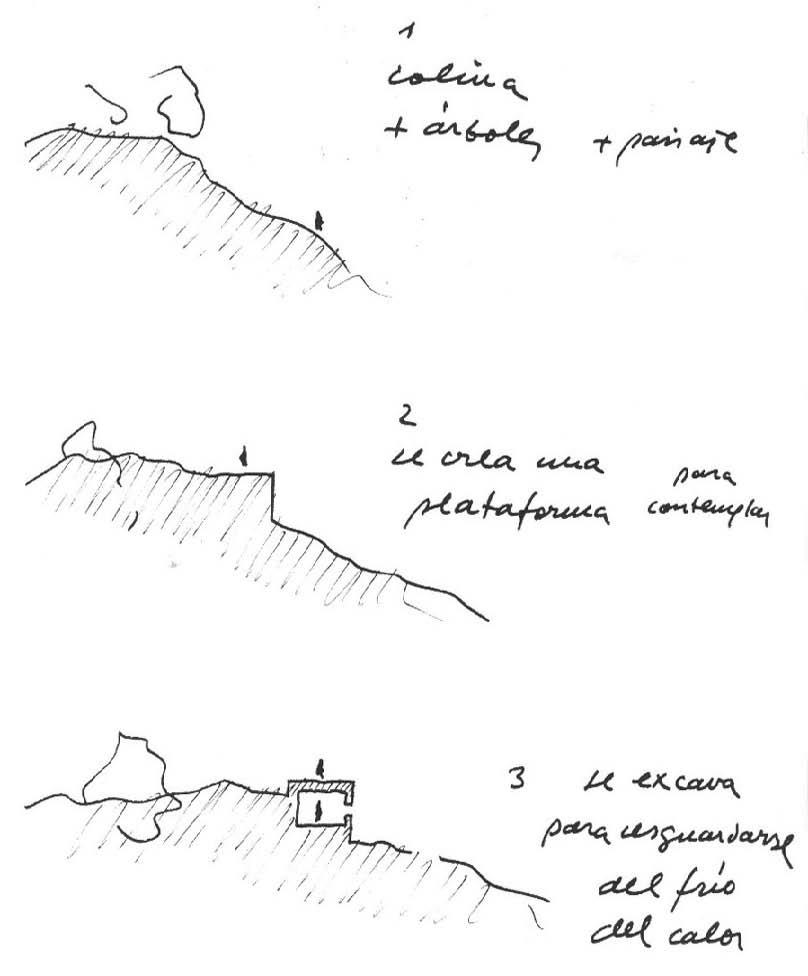 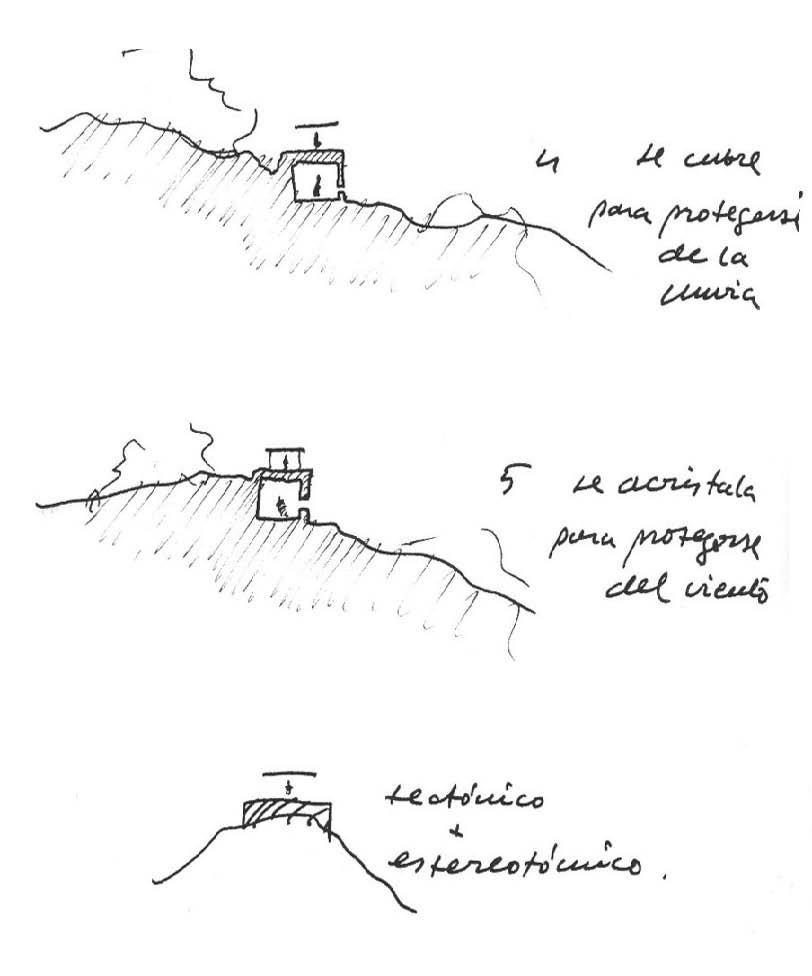 As a Greek temple sited at a certain height to capture the line of the horizon between two planes, a series of metallic columns shields the glazed volume that rests on the massive and compact plinth which forms the base of the house. This half-buried building houses the domestic program under a flat roof that comprises a swimming pool and the only outdoor horizontal surface in a plot with a 14 meter slope. With a floor plan arranged in bands parallel to the contour lines, this 9 x 27 meter plinth houses the kitchen and other facilities in the narrower bay that runs along the side which is in contact with the slope. Bedrooms and living rooms are aligned on the opposite facade, in a wider space which is separated from the facilities by a narrow band which contains the closets, the corridors and the staircase leading to the viewpoint. The facade is pierced by a uniform sequence of windows that selectively frame the surrounding views.

The house emerges by placing a tectonic box – a light structure of linear elements – on top of a stereotomic box – a heavy prismatic construction formed by the bearing walls in contact with the terrain –. 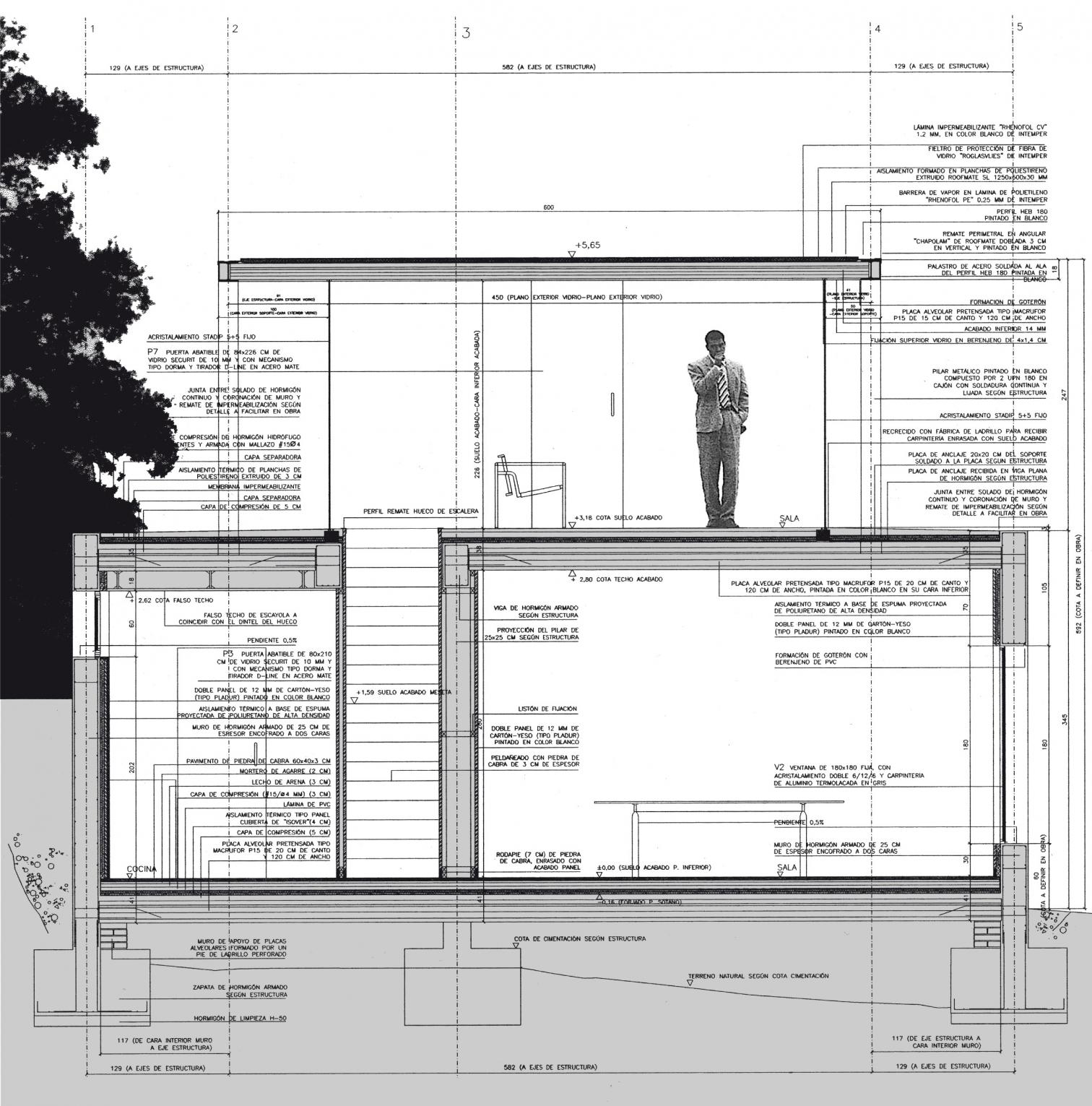 The constructional definition responds to this superposition of stratum of diverse density by means of a limited repertoire of materials. The concrete wall of the plinth clearly reflects the texture of the formwork, while the transparent enclosure of the viewpoint is made of frameless glass. The symmetry on plan has a bearing as well on the remaining classical models that served to inspire the design of this house, which brings the archetypes of the cave and the temple together under one same roof.

A metallic canopy protects the glass viewpoint located on the roof platform. 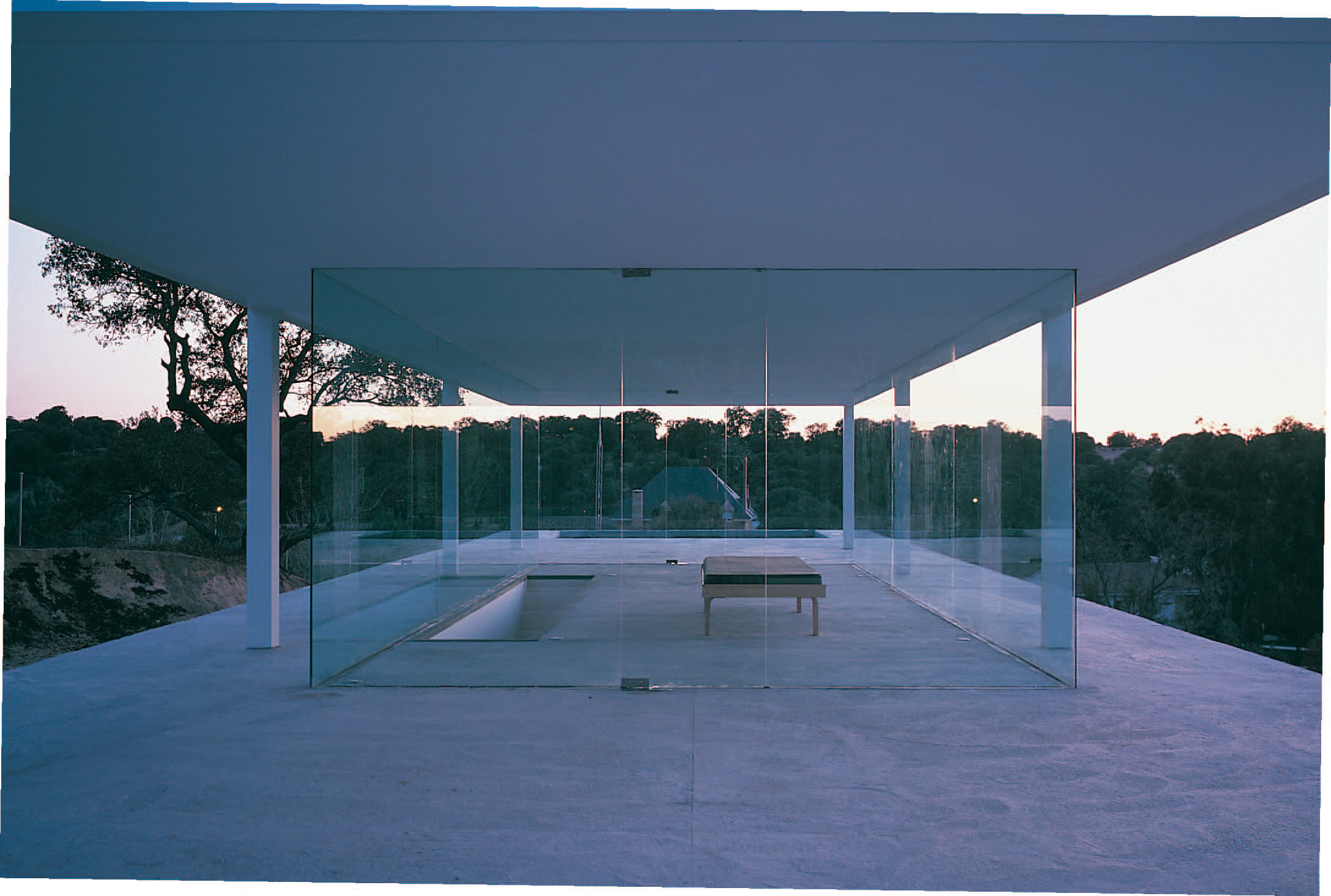 Alberto Campo Baeza   Spain   On the south periphery of Granada, the new headquarters of the Savings Bank will finally gather the offices of this financial institution that were scattered all over the city. As against the variety of shapes that make up the museum of science and t

Alberto Campo Baeza Alfonso González Gaisán Francisco Blanco Pablo Fernández Lorenzo Pablo Redondo Díez   Spain   A plot across from the Romanesque Cathedral of Zamora was the place chosen for the construction of the headquarters of the Advisory Board of the regional government of Castilla y León. The competition held produced a winning proposal that stems from

House of the Infinite

Alberto Campo Baeza   Spain   The solid volume of stone, rigorously perforated to shelter the residential program, is crowned by a simple podium of travertine that opens its lines towards the sea.

Alberto Campo Baeza   Spain   Building a house for a poet. That was the starting point of the project, located on a plot of some 440 square meters in a residential development in the southwest of Zaragoza. The house follows a clear and simple scheme, occupying three rectangular f

Alberto Campo Baeza Gabrion   France   Inspired in Rimbaud’s Le Bateau Îvre, the center is like a large ship sitting next to SANAA’s extension; the program is organized, like an assembly line, in two strata – a horizontal plinth from which a cubic volume emerges – wrapped in a black concr