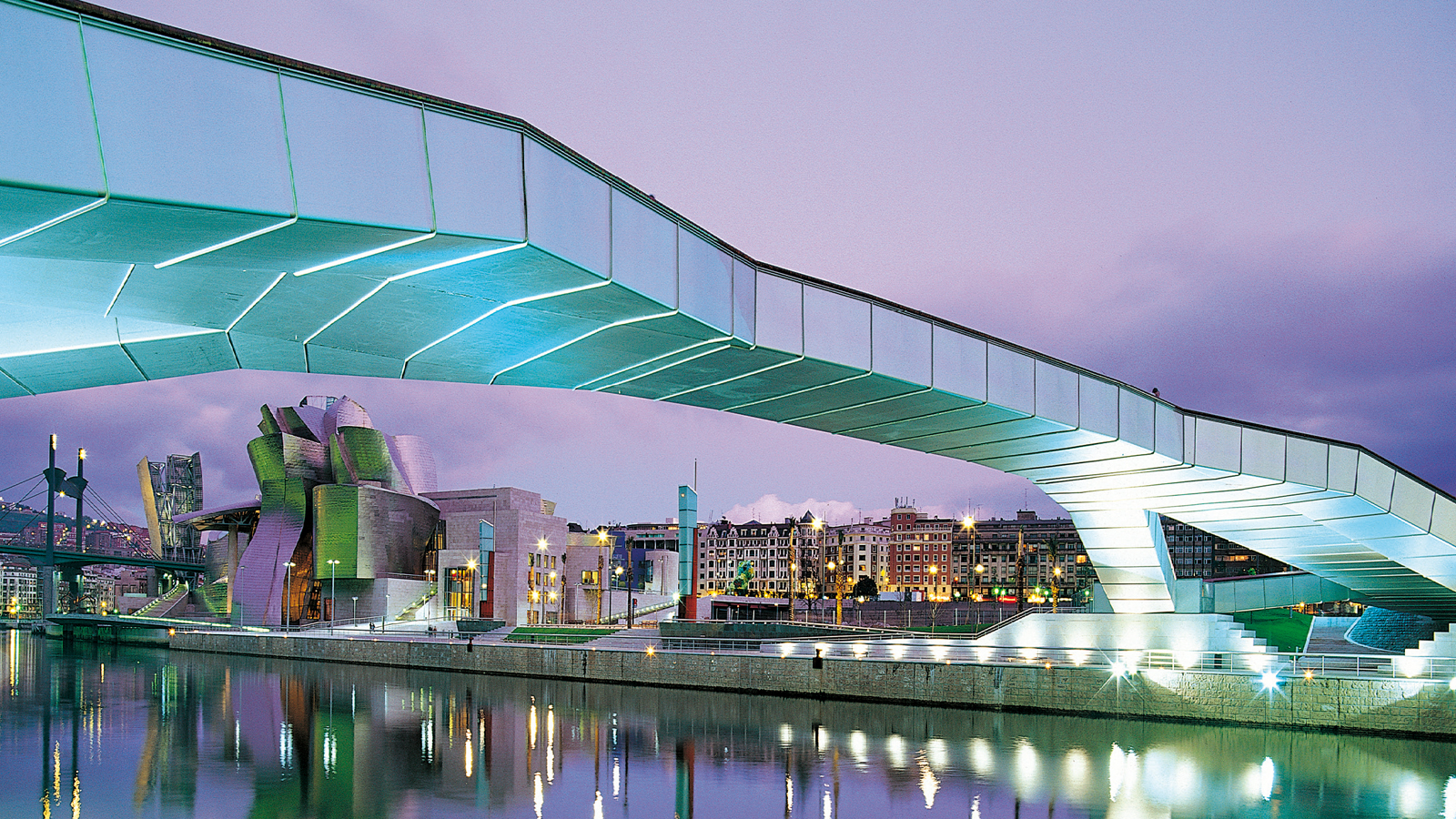 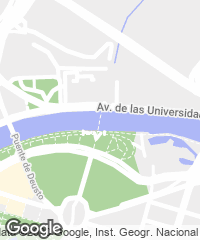 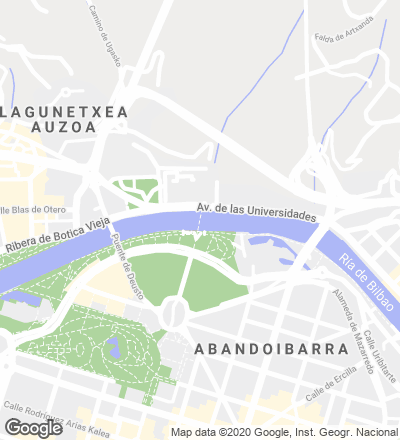 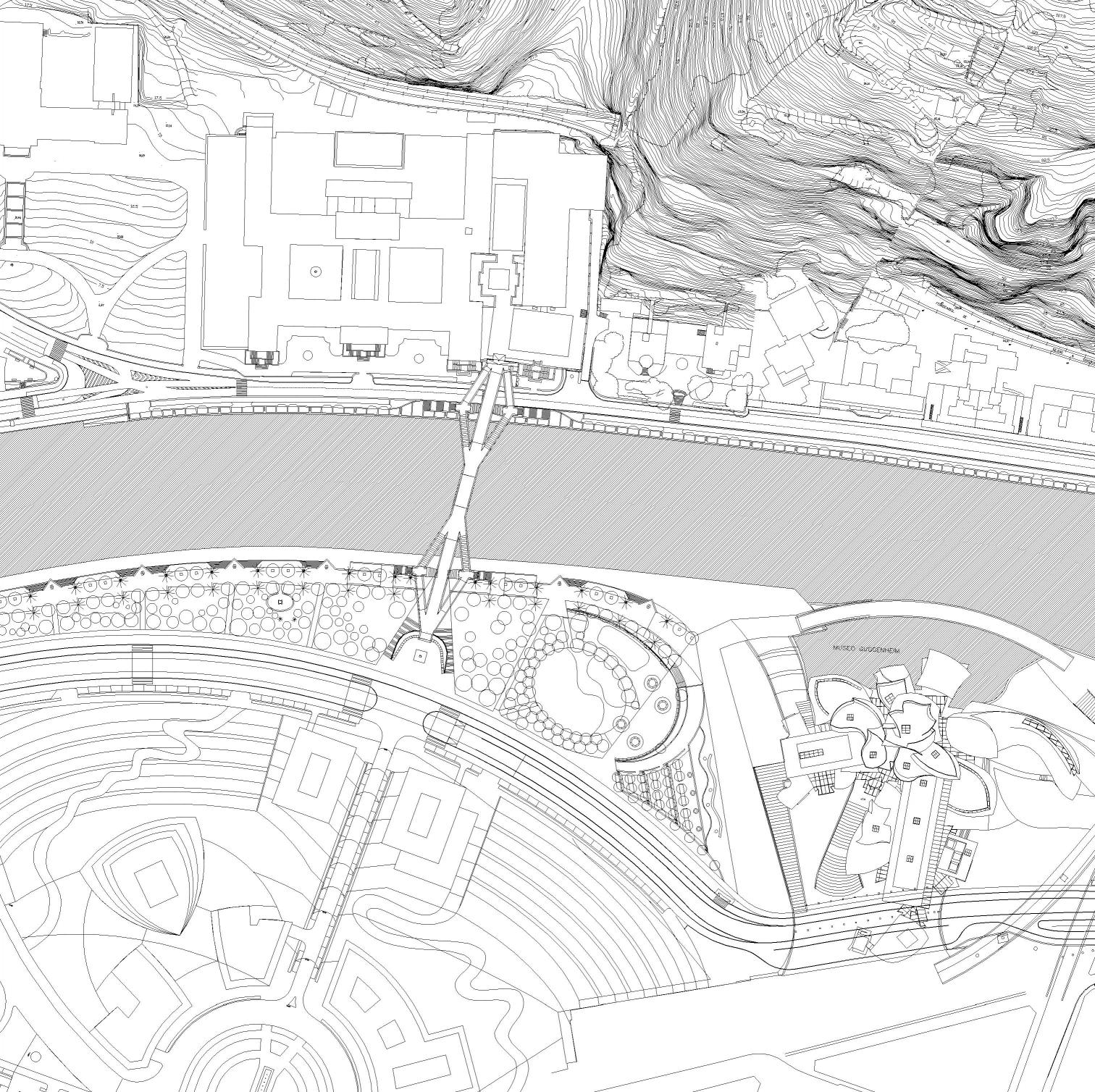 The project had to fulfill two objectives: not to pass unnoticed in a landscape with such important presences as the Guggenheim Museum, and to effectively solve pedestrian itineraries located at different levels.

According to the guidelines of the competition – called in 1995 –, the footbridge had to connect the riverside promenades, on the lower level, and also the University of Deusto and Abandoibarra square, on the upper level. The search for a continuous element that could solve the tensions of the site – with the strong architectural imprint of the museum and the palace – and the circulations at different heights led to a single-span solution with six supports at different height, formed by a structural sheet of constant thickness and with two different skins, one of stainless steel and one of wood, that folds as origami to form the pads and the ramps. 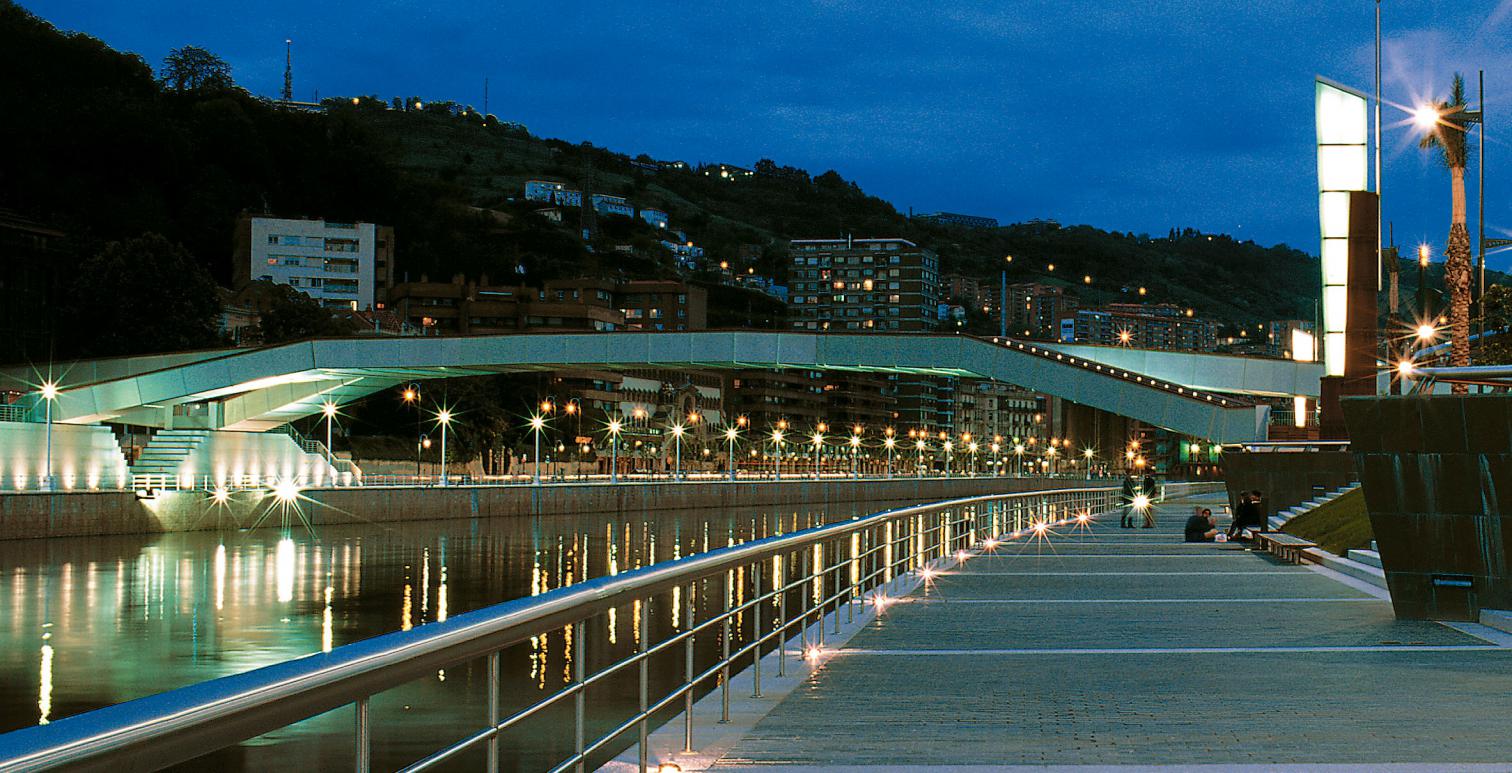 Folding like origami, a sheet of steel solves the different itineraries in one single gesture and gives way to a zoomorphic structure whose stainless exterior cladding makes it shine brightly over the river waters.

The exterior metallic skin is made of a series of prefabricated 20 mm thick steel sheets that are welded to one another and take on the load-bearing function of the footbridge. The welding joint is concealed below a steel overhang to produce a continuous skin effect. The interior of the footbridge, that is over six meters on its widest part, is clad in thin lapacho wood strips, giving it a warm appearance to contrast with the cold exterior steel enclosure. Sealing the encounter of both skins, thick wood boards act as sills of the side parapets of each stretch of the footbridge, and also as banisters and support. The structure within this double shell is made of a series of perforated steel ribs that distribute the load while allowing for the installations to run through their honeycomb holes. 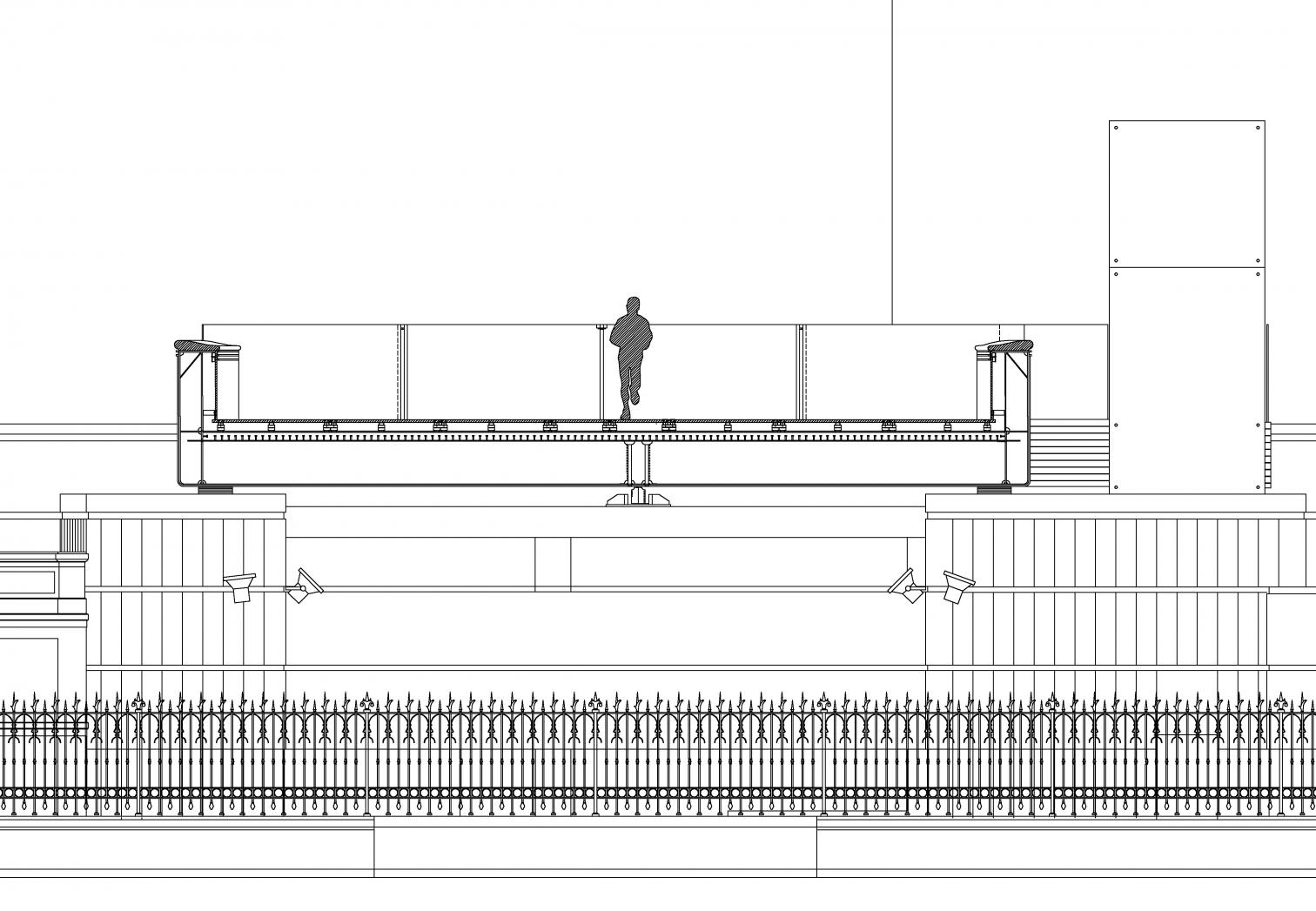 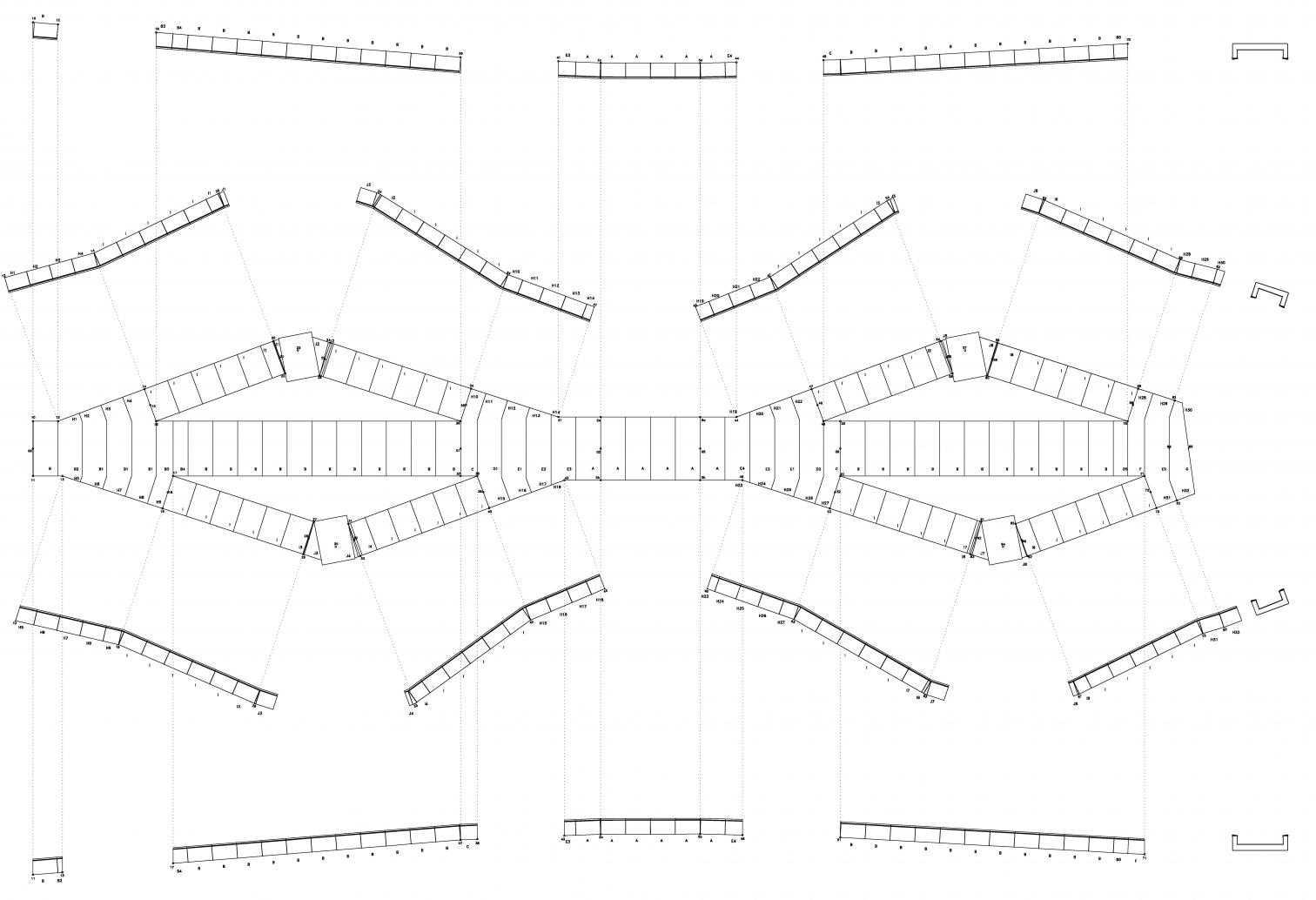 Raised on ramps and stone steps, the folded metallic piece looks like a dragonfly alighting on the dark mirror of the waters. A sculpture by Eduardo Chillida, made of Cor-Ten steel and entitled Begirari IV (The Watchtower), is a vertical contrast to the footbridge on its arrival at the Abandoibarra platform. Neither the engineer Fernández Ordoñez nor the Basque artist, friends and collaborators, saw their works completed. 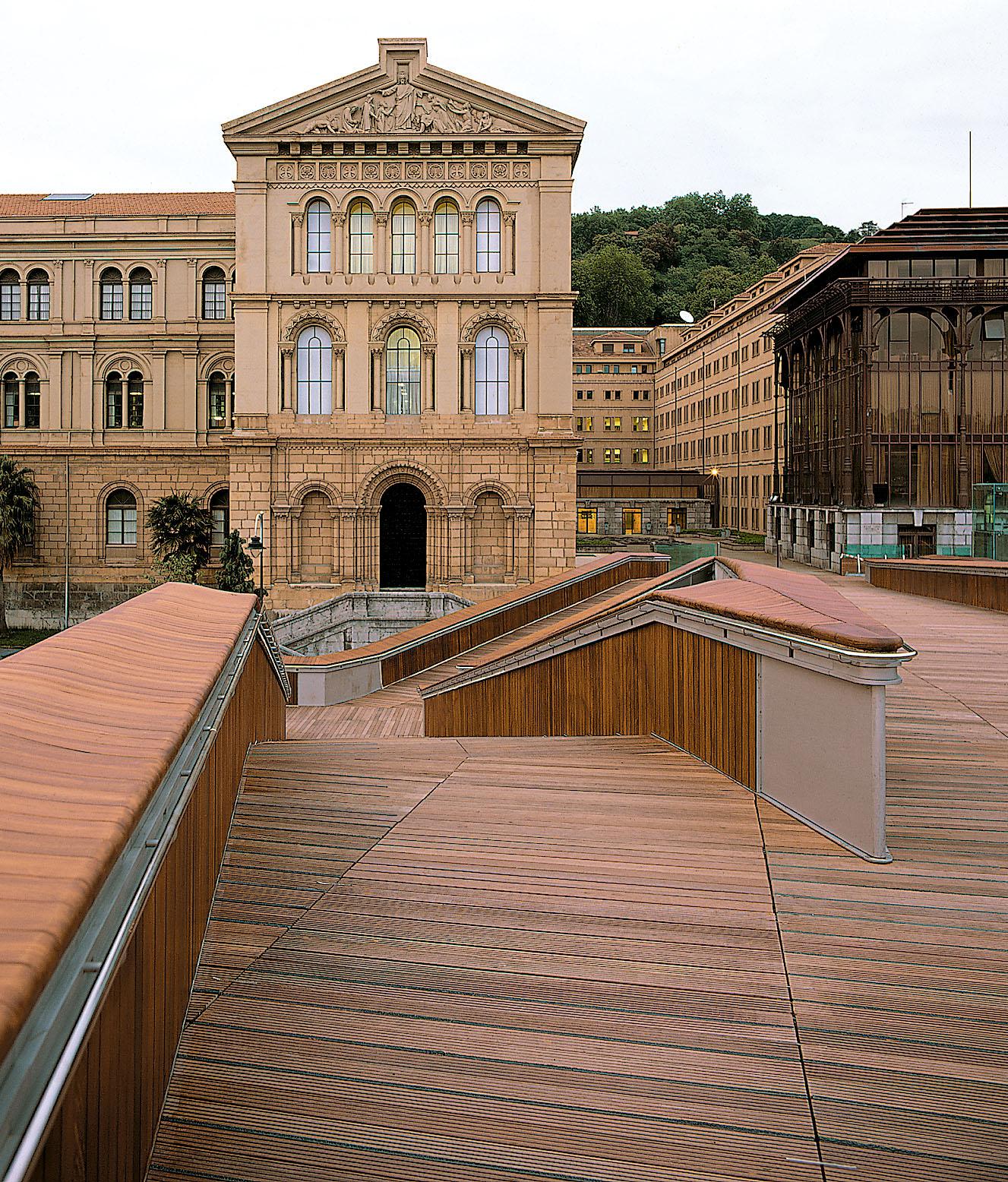 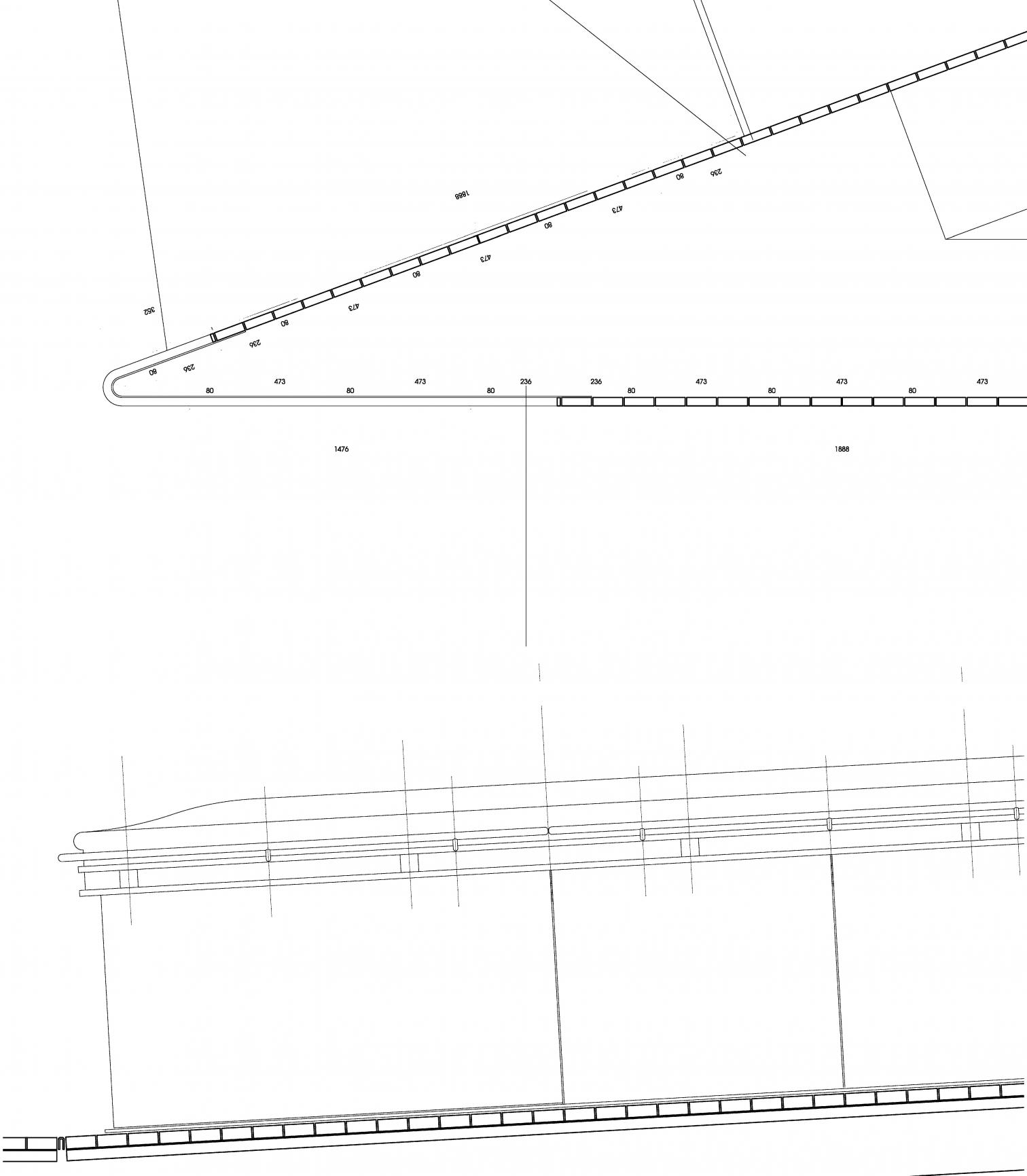 The interior of the footbridge, that measures over six meters on its widest stretch, is clad in lapacho wood to give it the warm quality common to a living area, and to counteract the coldness of the exterior skin. 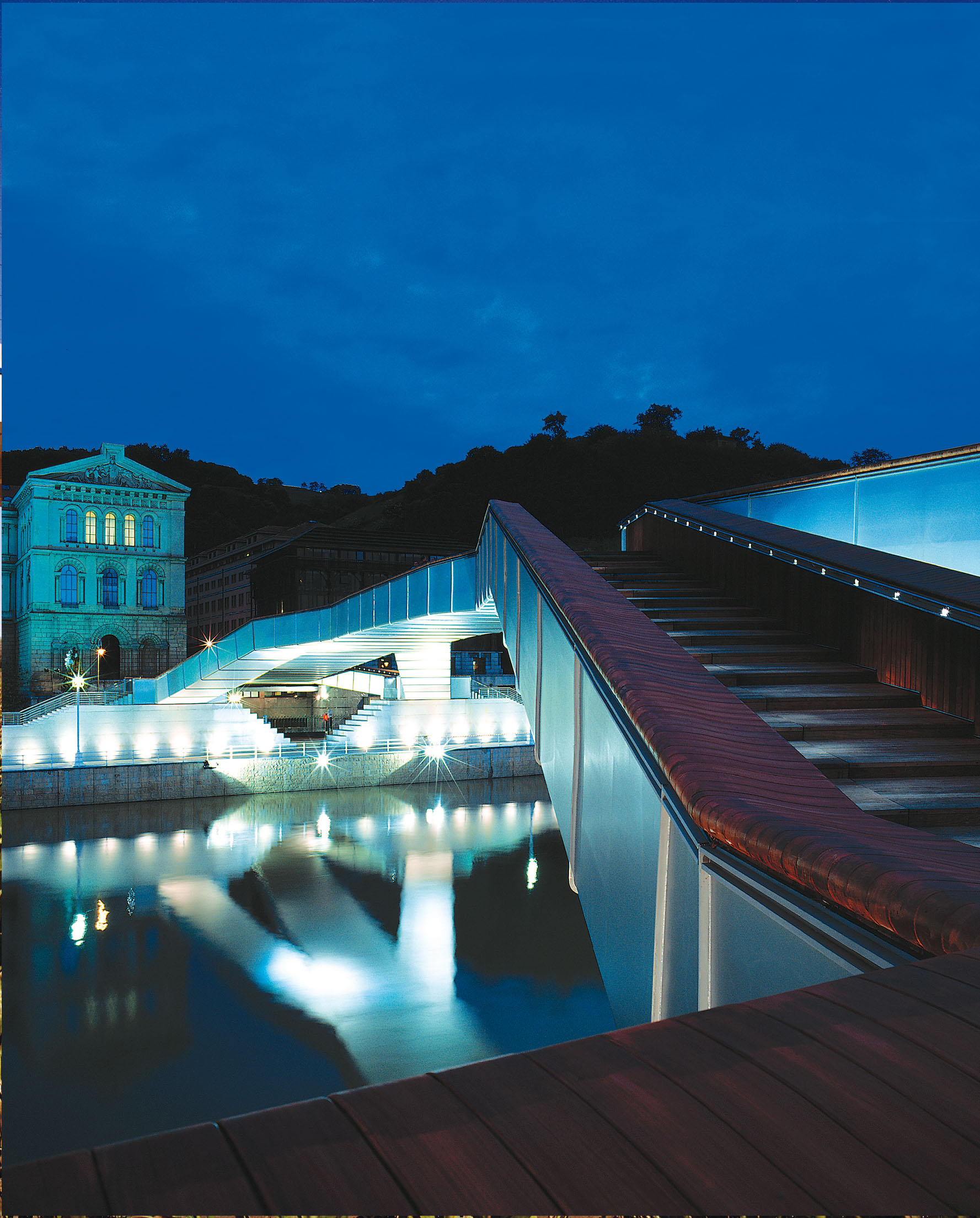 Enric Miralles   Spain   Part og Barcelona's industrial periphery, this sector of Mollet del Vallés will be another major access into the city once the planned changes in the traffic system are carried out. Set in a frontier territory whose urban conditions have yet to be de

Carme Pinós Enric Miralles   Spain   Going up the hillside one reaches the excavation which houses the cemetery. A cemetery in a pit, laid out as a quarry in the open. The wound on the ground preserves the feeling of a neglected quarry, whose slopes crumble with the passage of time unde

Javier Manterola   Spain   The route of the Madrid-Barcelona high-speed railway line has required a previous adaptation of both the terrain through which the tracks will pass and of the urban centers that shall house the different stations. While in Zaragoza the construction w

The Weave of Dreams

Marta García Carbonero   The world oil crisis also coincided with the decrease of the studio’s activity; during the decade of the seventies, the commissions were few in a Spain in political transition, where the profession changed at the same pace as the economic and politic

Santiago Calatrava   Spain   With Frank Gehry's  Guggenheim Museum as landmark, Bilbao has launched an ambitious urban renovation plan that has also resourced to well-known names to design its most significant infrastructures. The extension of Sondica Airport is part of this gro

Walkway in the Surroundings of the Bastion of Labrit

On view through 10 January at the Guggenheim Museum of Bilbao, which has organized the exhibition in collaboration with the Barbican Centre in London, is the first retrospective show ever to be offered in Spain on the American abstract expressionist

Burgos & Garrido   Spain   ‘A Line Over the Miño,’ a project carried out by Burgos & Garrido in collaboration with Bernabeu Ingenieros, turned out the winner in the proceedings negotiated to select from the best three entries to the ideas competution for a pedestrian and c

Cruise Terminal at the Port of Seville

Hombre de Piedra Buró 4 Arquitectos   Spain   Completely constructed with shipping containers transformed beforehand in the factory, the new cruise terminal of the city of Seville was set up in less than fifteen days.