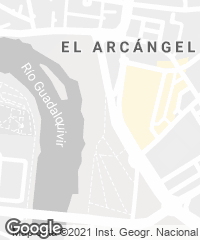 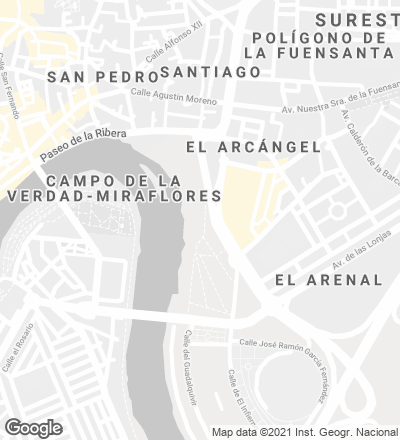 In an area that is particularly close to the center, right next to the meander that surrounds the stadium, the Balcón del Guadalquivir project restores the blurred banks of the river, builds a park in the areas that are cleared with the intervention, and turns the Martos Mill, refurbished as an hydraulic museum, into the center of attention of the recovered area and into its point of connection with the city.

The Balcón park follows the guidelines of three fans that unfold from the Ermita de los Mártires (Martyrs’ Chapel) to the stadium and Arenal bridge. The first fan is centered around the chapel, the second organizes the entrances via three ponds that mark the descent towards the river, and the third makes its way through a large tree-lined area, directing the paths towards different points of the edge and to the fair grounds and rowing club, that shall be built in the lower level.

The vegetation is distributed in two areas: a first colorful one of gardens with bushes and flowers close to the chapel and the water, and a second one which generates shaded areas thanks to trees of different size, somewhat farther away from the river. The complex descends in the form of terraces from the highest point of the avenue to the banks of the river, and manages, with layers of water and connecting bridges, to bring the experience of water closer to the citizens. The main channeling wall, as well as the smaller walls that carve the terraces, are made of white granite from Cáceres; the sloping surfaces are finished with dry masonry of local stone – through which vegetation will grow –, and the smaller courts that are open in the lower promenade are clad in fragmented and colored large-size bricks.

The most important space in this intervention is the old milling shed, a vaulted room. The restoration has been carried out in keeping with the original architecture, and its interior contains the machinery of the old fulling warehouses. A small warehouse that was located over the vaulted hall and hence protected from flooding has been transformed into an exhibition area. Its original morphology is thereby recovered, adding a new prism finished in aluminum and glass and with a steel and concrete structure, where one can enjoy both the exhibited pieces and the views onto the river and the city. Two glazed skylights connect it directly with the vaulted hall underneath it, aside from acting as base for the display cabinets of the exhibition.

The project for the restoration of the Martos Mill and its conversion into hydraulic museum taking up one corner of the park places a lookout space over the old vaulted hall, connecting both with vertical prisms of light.

Juan Navarro Baldeweg   Spain   In the Altamira cave, close to Santillana del Mar, the Stone Age paintings were discovered in 1879 and since then the number of visitors has increased to the extent of putting their conservation in danger. Closed since 1977, these representations of

Juan Navarro Baldeweg   Spain   The weight the tourist industry carries in the Canaries often works to the detriment of other, less profitable but equally necessary activities. To draw attention to an educational life on the rise, the University of Las Palmas has invited teams of a

Juan Navarro Baldeweg   Spain   Located on the riverbanks of the Arlanzón  as it flows through Burgos, the new complex has a material and fluvial relationship with the Atapuerca site. The paleontological and archaeological findings of Atapuerca were so considerable that it was nece

Matos Castillo   Spain   The opening of the day center and park in the Casino de la Reina, starts a new episode in the eventful history of these grounds of the Madrid quarter of Lavapiés. The historic center – formed initially by a small palace, a vegetable garden and a pond