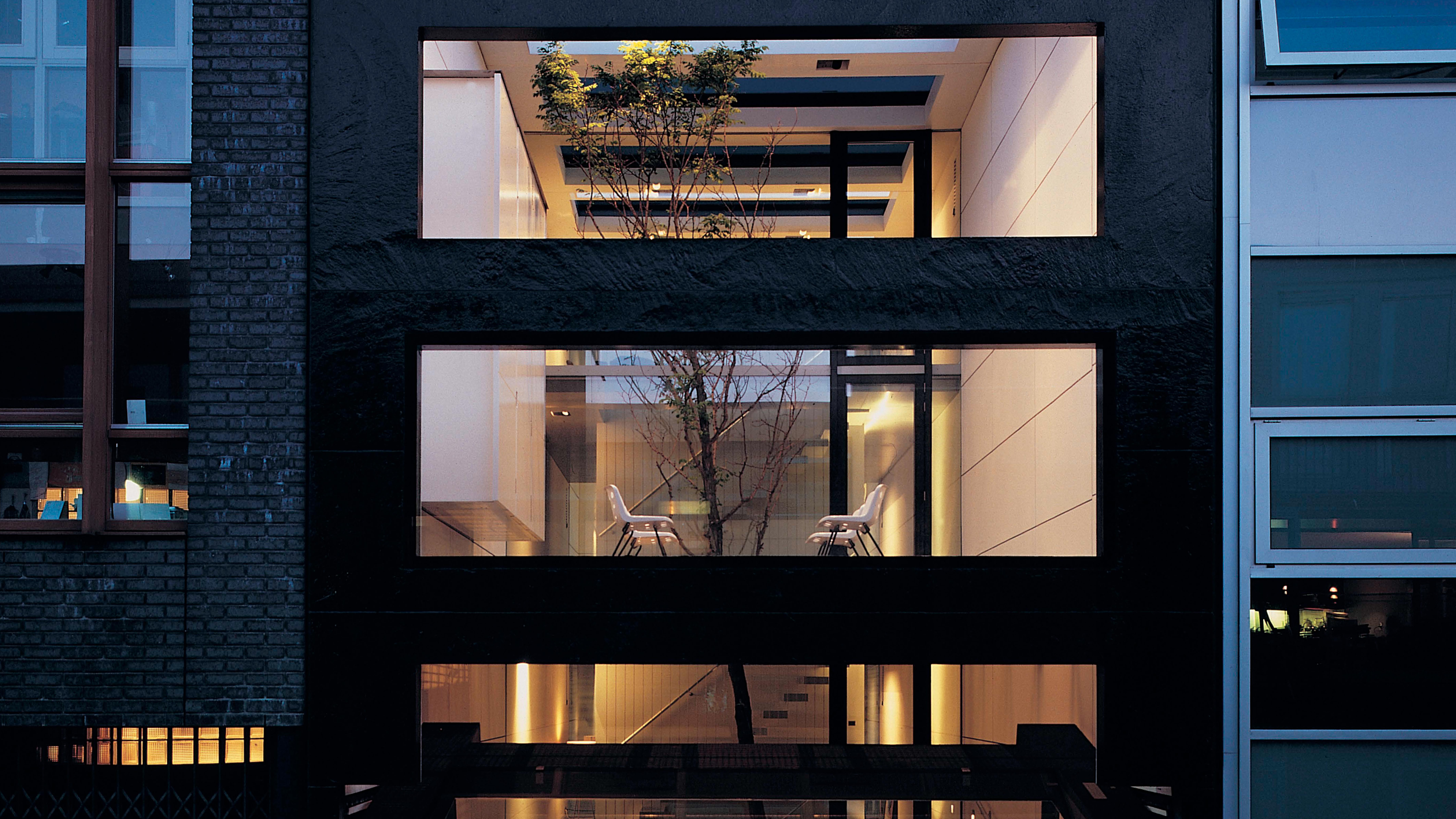 House on the Canal, Amsterdam

In the Eastern area of Amsterdam, next to the old harbor which has recently been recovered as a residential area, a new construction leans over the water making of formal refrain its main reason of being. As it could not be done in any other way in this city of canals, the plot is a strip of narrow and deep terrain, in which light enters solely from two of its facades. In view of these starting points, the house is concealed behind two facades of strict geometry which perform as screens of domestic life: of reinforced concrete and pierced by large rectangular openings, they protect the weightless glazed box which forms the house with a series of spaces of transition between the public area of the street and the domestic privacy. In this way, a courtyard which serves at the same time as a garage opens from the street as the anteroom to the main entrance, while a narrower void runs along the entire height of the building, hidden behind a facade which opens onto the canal and literally seems to float over the water as a large vertical barge.

As against the horizontality which is predominant in the facade composition, a strong upward tension – perhaps inspired by the profession of the client, a mountaineer – is transmitted to all the areas of the house , which overlook the access courtyard or the void covering the entire height of the north facade. The program is distributed along a total of four floors, reversing the traditional stratification of uses – shared living room areas downstairs and private rooms upstairs – in order to make the most of light and the views. Onto the street, the lower part of the facade swings to give access to the garage, a metallic grille ramp going up to the entrance beneath which a small storage basement has been fit out. The bedroom and the bathroom take up the access level which is right on top of the library and studio that are at the same level as the canal. As if it were the core of the house, the kitchen and the dining room occupy the intermediate floor, while the area below the roof – entirely pierced by skylights – serves as living room area.

A strict orthogonal geometry dominates the house, which relies on cold materials and precise finishes. The exterior facades of the house were made out of reinforced concrete, while a curtain wall was used as enclosure of the house itself and the courtyards, paved with grating. Only the imprecise contour of the tree growing in the patio brings an organic hue into this introverted universe of Cartesian coordinates...[+]

Beatriz Colomina   The entire facade of a typical suburban house has been removed and replaced by a full sheet of transparent glass. Midway back and parallel to the front glass facade, a mirror divides the house in two areas. The front section is revealed to the public

Rudy Ricciotti   France   In a well-to-do neighborhood on the outskirts of Marseilles – where the French coast starts to resemble Italy – a contemporary art collector wanted to raise a shelter to display his paintings and furniture. The steep slope of the plot descends toward

MVRDV   Holanda   Beyond the surprises which canals always have in store, Amsterdam’s courtyards conceal buildings as secrets. Duiker’s open air school in Amsterdam Zuid is one of them, and now the house-studio for a couple of graphic designers joins this tradition wi