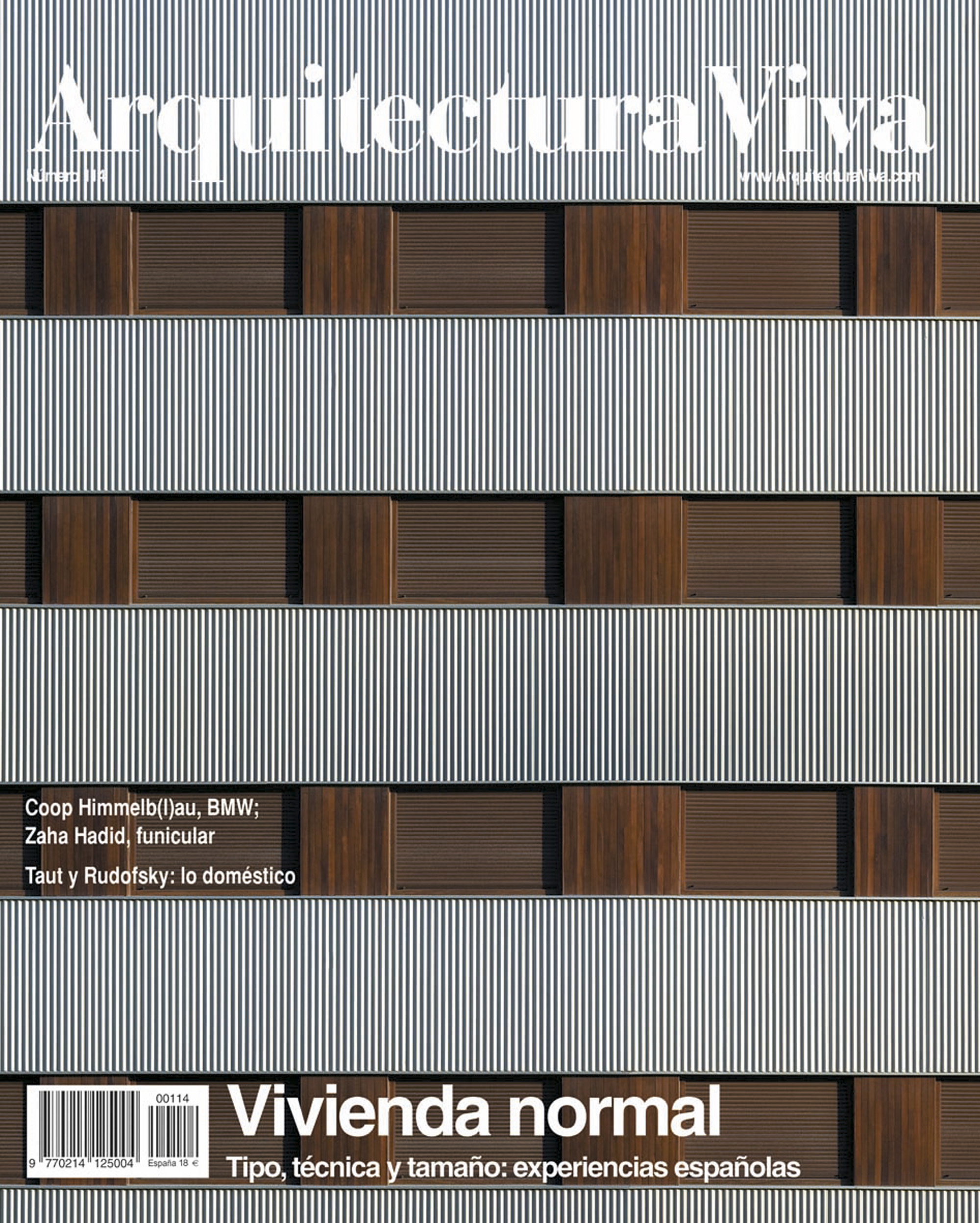 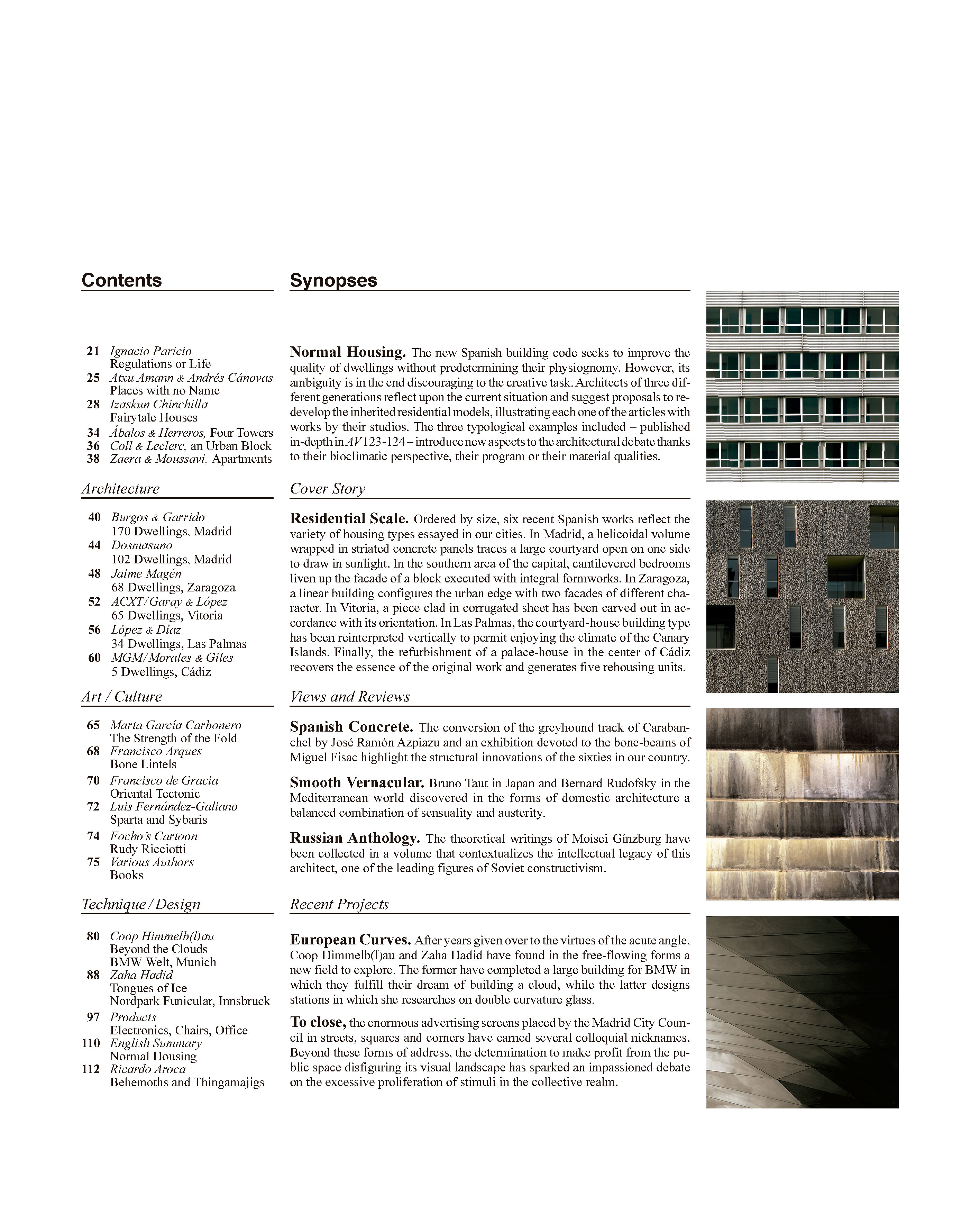 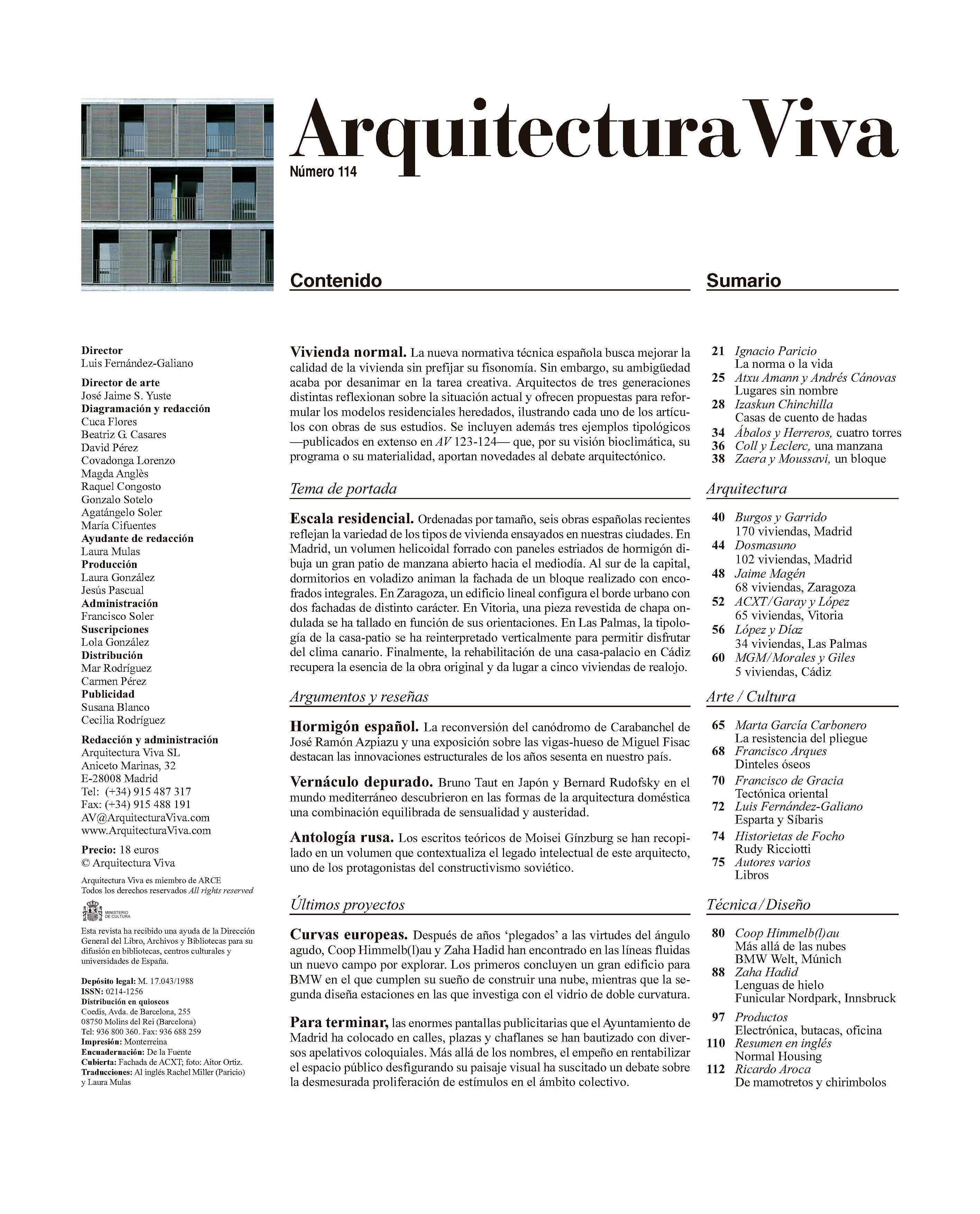 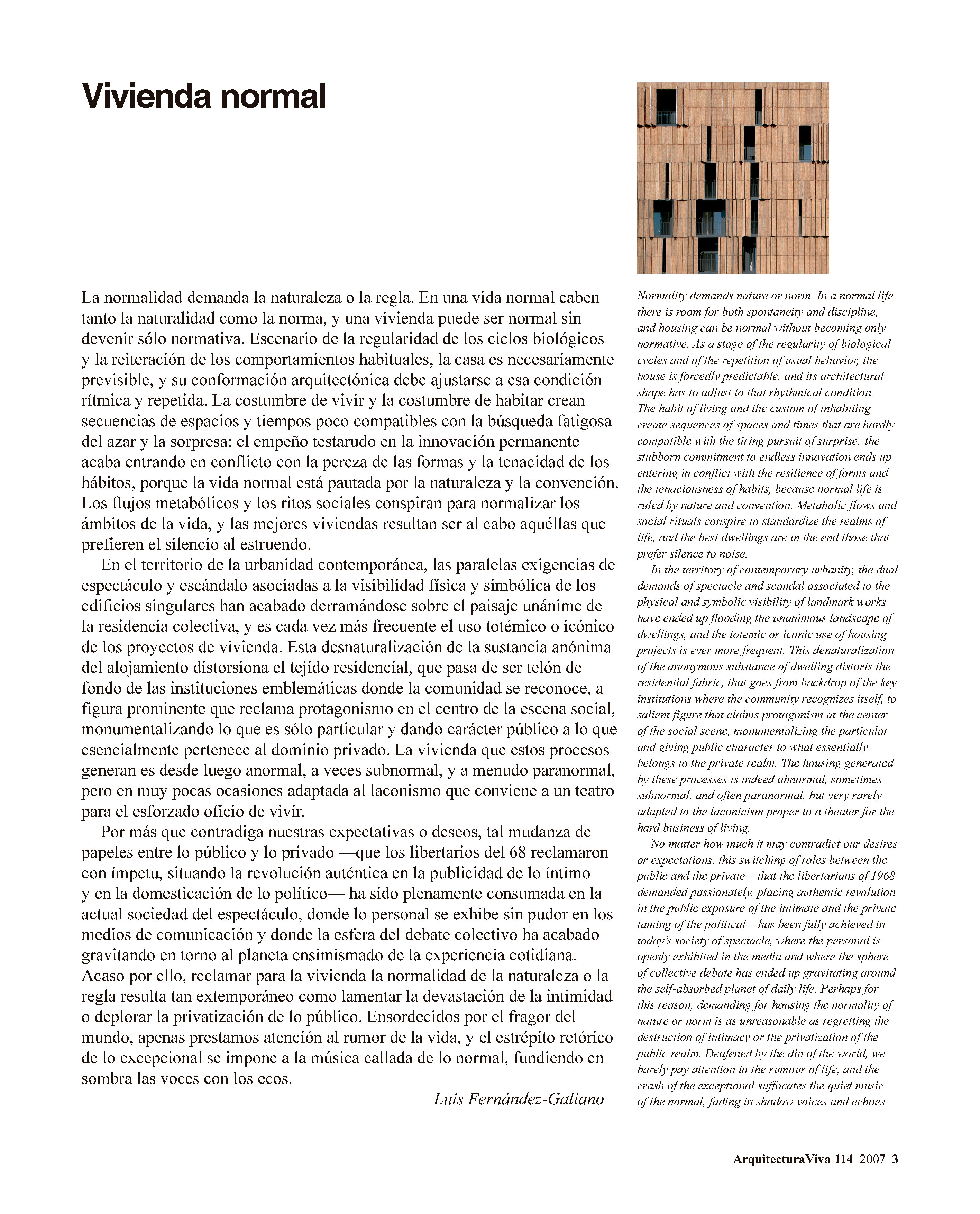 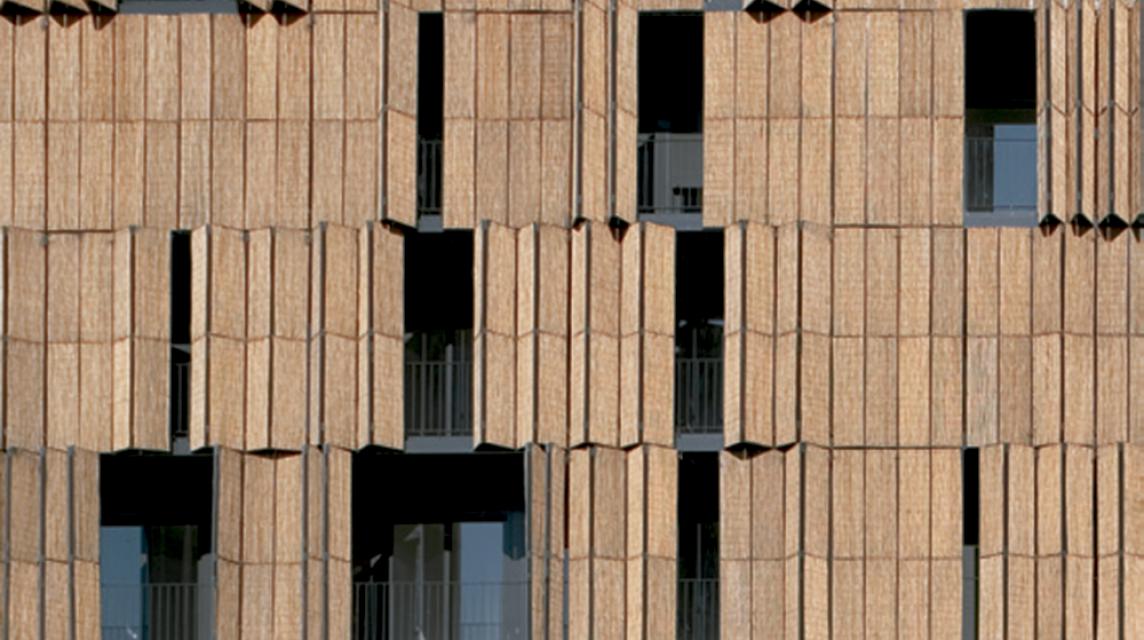 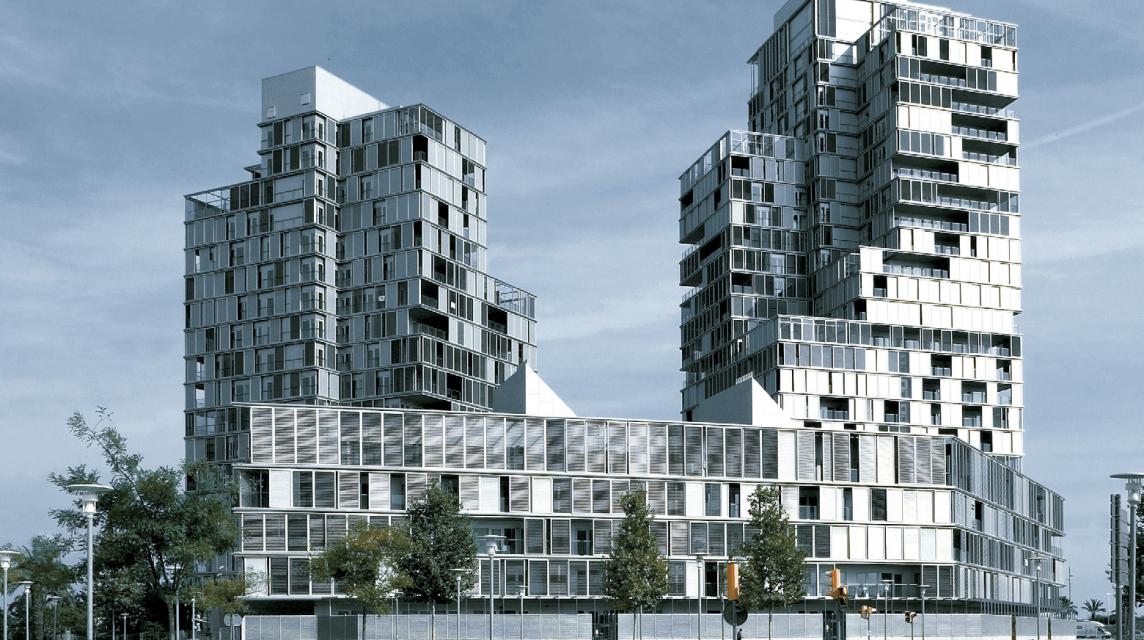 Ignacio Paricio   Social changes mean leaving behind a lot of accumulated knowledge adopted and assumed as habit. Housing has undergone such changes: first, it was the disappearance of domestic service. Then, the mass entry of women on the job market and later, the gr

Places with no Name 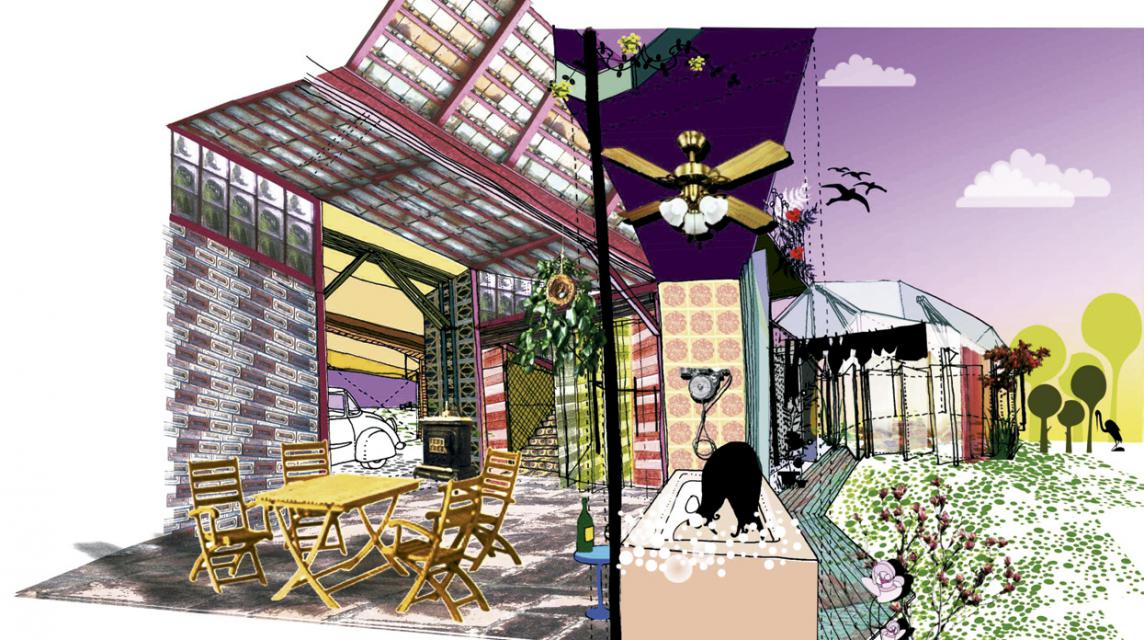 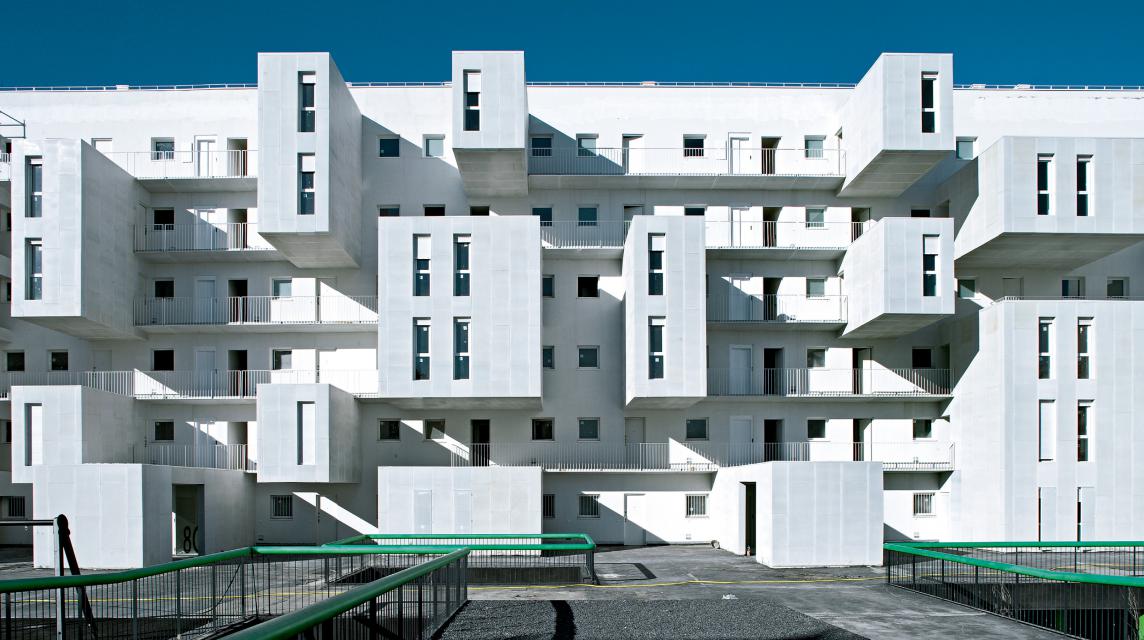 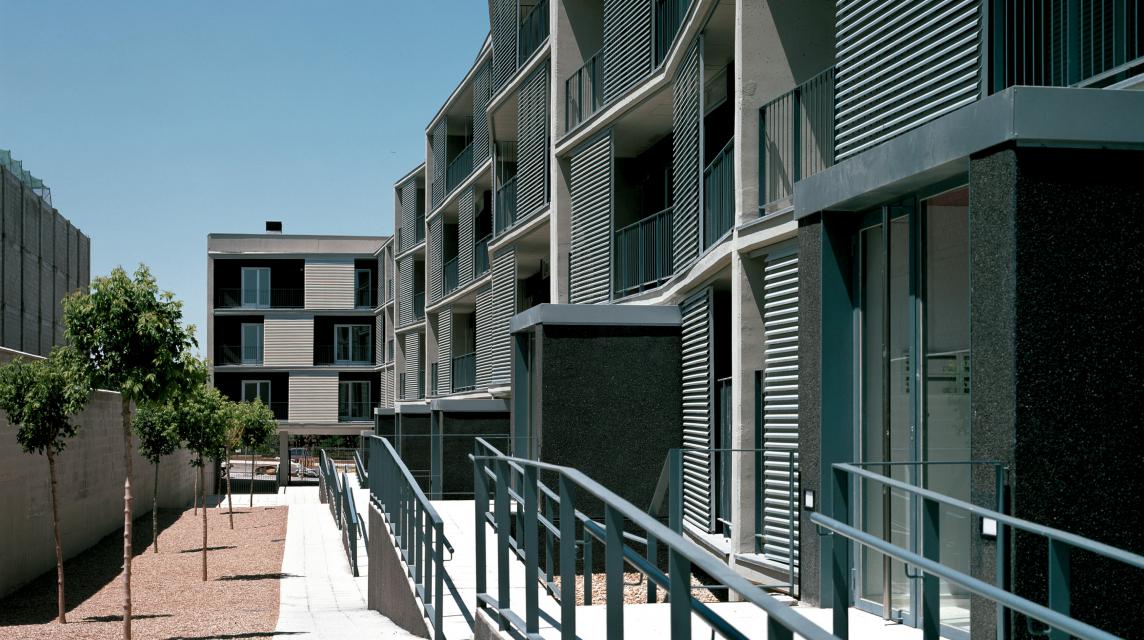 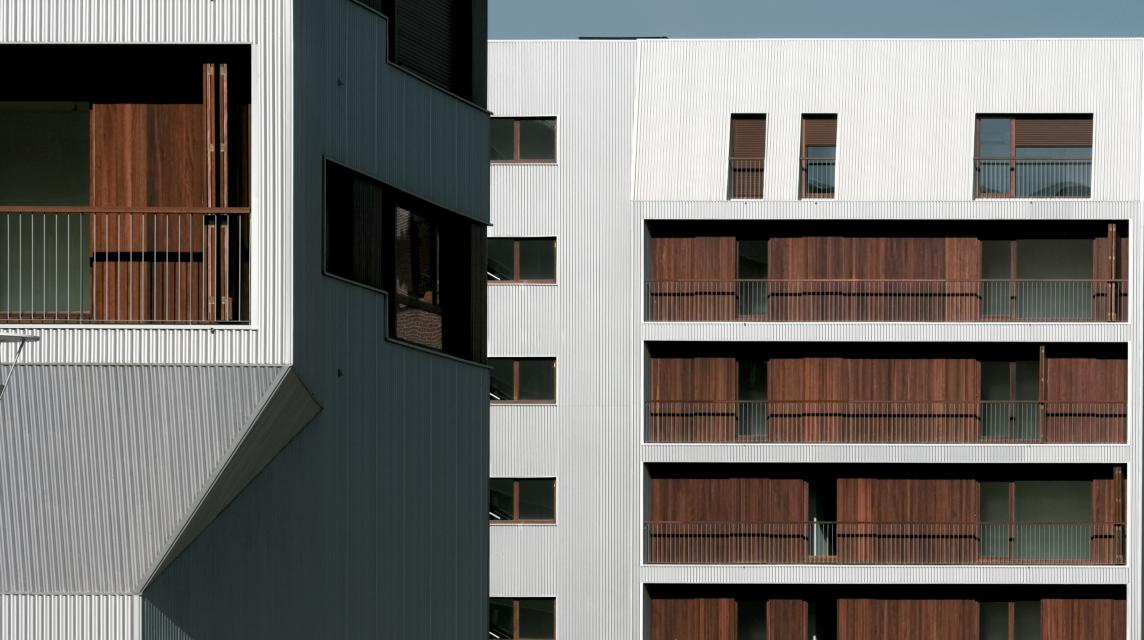 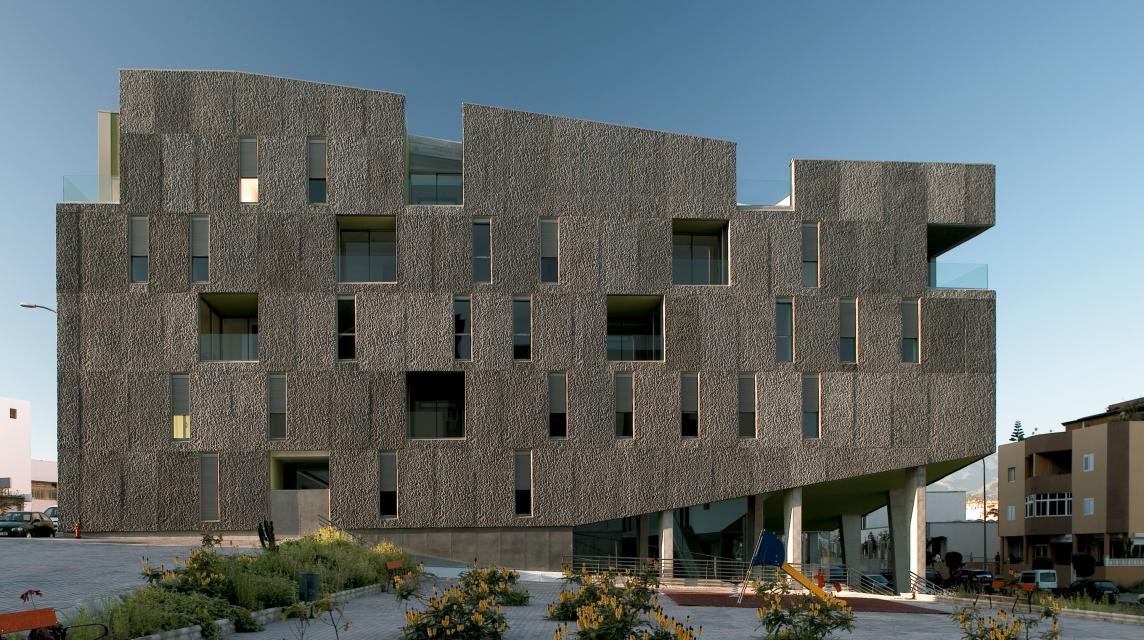 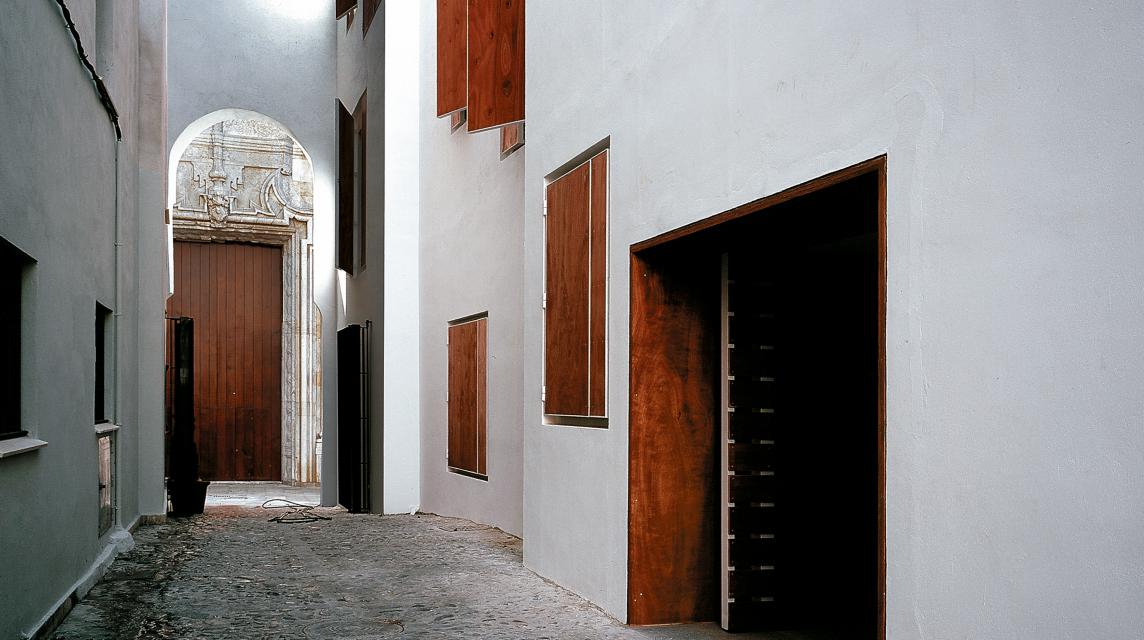 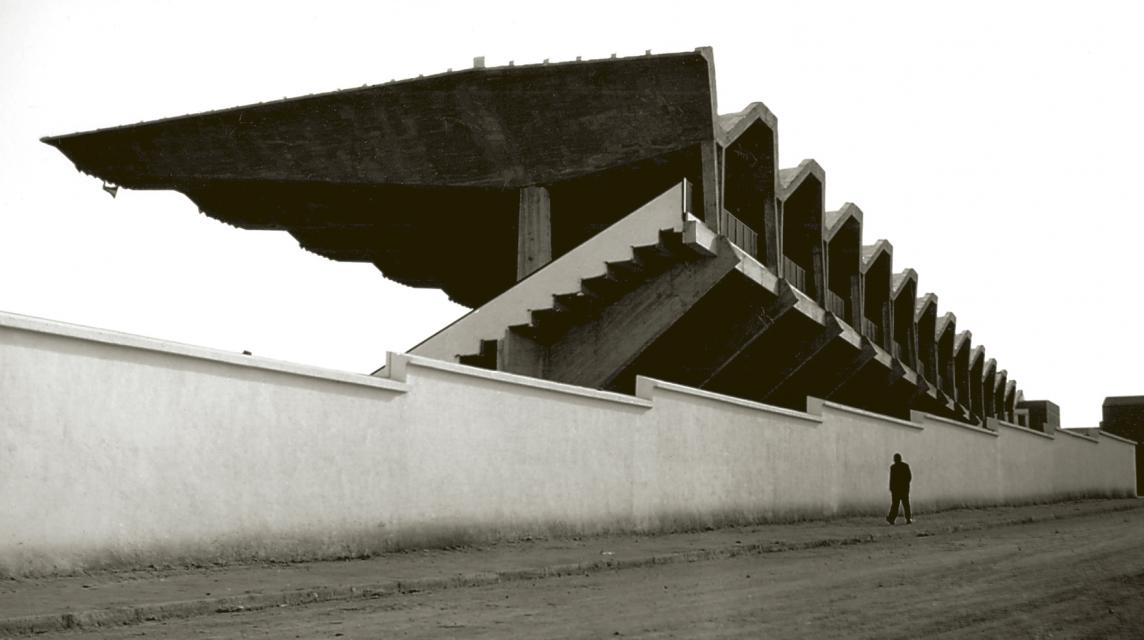 Miguel Fisac ​​and the Structures of Nature

Coll-Leclerc   Spain   Building on one of the scarce lots available Bin Barcelona’s Ensanche entails an added commitment: making the most of the possibilities offered by the urban plan of Cerdá to complete the block. Alejándose de la organización sugeridas por el concurso

Ábalos & Herreros   Spain   Both the verticality of the tower building type and the way in which the volumes rest on the plot address the priorities of the project: wrapping up the articulating axis of the new urban expansion area of Salburúa, in Vitoria, and establishing a dia

FOA | Foreign Office Architects   Spain   This residential block goes up in a new urban expansion area in the southwest of Carabanchel, and is built within the context of the social housing program developed by government of the municipality, the objective of which is to attend to the increa

Burgos & Garrido   Spain   The project stems from the idea that the best neighborhood needn’t be made up of unique pieces, but rather that specific elements such as systematicity, homogeneity and expressive moderation are essential in residential buildings. In this way, the bl

Normal Housing. The new Spanish building code seeks to improve the quality of dwellings without predetermining their physiognomy. However, its ambiguity is in the end discouraging to the creative task. Architects of three different generations reflect upon the current situation and suggest proposals to redevelop the inherited residential models, illustrating each one of the articles with works by their studios. The three typological examples included – published in-depth in AV 123-124 – introduce new aspects to the architectural debate thanks to their bioclimatic perspective, their program or their material qualities.

Residential Scale. Ordered by size, six recent Spanish works reflect the variety of housing types essayed in our cities. In Madrid, a helicoidal volume wrapped in striated concrete panels traces a large courtyard open on one side to draw in sunlight. In the southern area of the capital, cantilevered bedrooms liven up the facade of a block executed with integral formworks. In Zaragoza, a linear building configures the urban edge with two facades of different character. In Vitoria, a piece clad in corrugated sheet has been carved out in accordance with its orientation. In Las Palmas, the courtyard-house building type has been reinterpreted vertically to permit enjoying the climate of the Canary Islands. Finally, the refurbishment of a palace-house in the center of Cádiz recovers the essence of the original work and generates five rehousing units.

Spanish Concrete. The conversion of the greyhound track of Carabanchel by José Ramón Azpiazu and an exhibition devoted to the bone-beams of Miguel Fisac highlight the structural innovations of the sixties in our country.

Smooth Vernacular. Bruno Taut in Japan and Bernard Rudofsky in the Mediterranean world discovered in the forms of domestic architecture a
balanced combination of sensuality and austerity.Francisco de Gracia
Tectónica oriental
Luis Fernández-Galiano
Esparta y SíbarisRussian Anthology. The theoretical writings of Moisei Gínzburg have been collected in a volume that contextualizes the intellectual legacy of this architect, one of the leading figures of Soviet constructivism.Historietas de Focho
Rudy Ricciotti
Autores varios
LibrosRecent Projects

European Curves. After years given over to the virtues of the acute angle, Coop Himmelb(l)au and Zaha Hadid have found in the free-flowing forms a new field to explore. The former have completed a large building for BMW in which they fulfill their dream of building a cloud, while the latter designs
stations in which she researches on double curvature glass.

To close, the enormous advertising screens placed by the Madrid City Council in streets, squares and corners have earned several colloquial nicknames. Beyond these forms of address, the determination to make profit from the public space disfiguring its visual landscape has sparked an impassioned debate on the excessive proliferation of stimuli in the collective realm.Productos
Electrónica, butacas, oficina
Resumen en inglés
Normal Housing
Ricardo Aroca
De mamotretos y chirimbolose
Luis Fernández-Galiano
Normal Housing

Stone represents construction at the limit: at the limit of time, because its tenacious inertia speaks at once of its remote origin and its desire to last, inasmuch as its firm resistance is a symbol of timeless solidity; at the limit of technique, because its extreme variety of joints and bonds runs parallel to its tensional Achilles tendon, because its incapacity to absorb traction is the mechanic reason of its use in volume; and at the limit of touch, because the perception of its textures evokes the contact of the surface with the skin, even when the gaze stops to dwell on the light appeal of shine or color. Time, technique and touch come together in the workshop, which extracts from the stone stubborn persistence, adequate use and common beauty.

Barely natural already in its early, primitive form, contemporary stone is in every sense an artifice, the product of an industry as sophisticated in its mechanisms of extraction and handling as it is complex in its processes of marketing and financial management: marble, granite and slate cover the globe entangled in a web of transport systems and cash flows that take the material from the quarry to the site ignoring the stubborn rules of proximity that in a not so distant past gave constructive, functional and visual homogeneity to the landscapes modelled by human action. And yet, even though entirely artificial in its present condition, stone preserves the singular seduction of its ultimate origin in the womb of nature.

The necessary chance of geology offers a motherly connection with the mysticism of the essential stone that carries on its Atlas shoulders the indispensable continuity in a changing world, but also with the endless list of igneous, sedimentary or metamorphic rocks that display their mechanic and aesthetic variety in a myriad range of locations and sites, multiplying their mineral magic with a whole palette of different aggregates, fractures and weatherings. Essential matter upon which we raise institutions and buildings, and accidental matter whose appeal is based on its endless heterogeneity, stone extends its wide arch of symbolic meaning from a nude and metaphysical radicalness to the cluttered foliage of picturesque diversity.


Severe and laconic as a cornerstone, or exact and necessary as keystone, this mutating material can also shed its gravitas to break up into a caleidoscope of lighter versions, be them thin facade panels, exfoliated roof slabs or translucent enclosure sheets: elements where lightness implies technical versatility, freedom of choice and expressive plurality. It is, in the end, a different way of understanding the journey towards the limits, in an itinerary that replaces the exploration of matter as a never-ending excavation with a continually renewed expansion that rubbles space with the pragmatic multitude of individual taste: between those movements, essential implosion and plural explosion, beats the silent pulse of live stone.