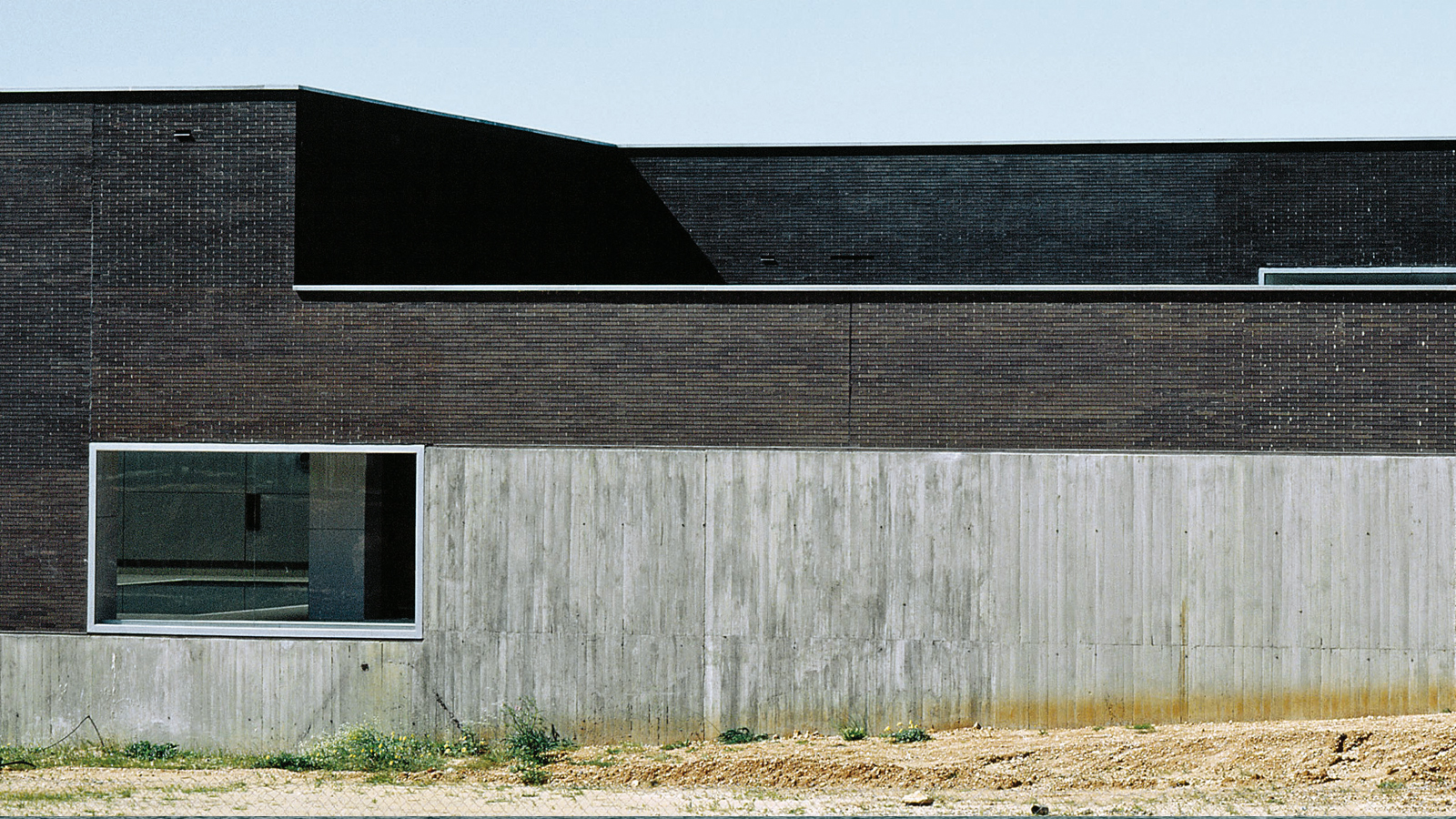 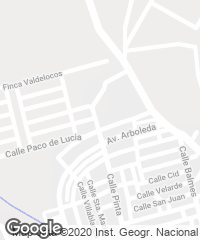 A terrain of 13,000 square meters in the northern area of Lepe and within a residential area expanding the urban center, was designated by the city council as an area for sports uses. This measure entails the construction of facilities for outdoor sports with changing rooms and a parking lot, and the multipurpose indoor swimming pool – a parallelepiped of brick and concrete with a north-south orientation –, is the center of the whole complex. 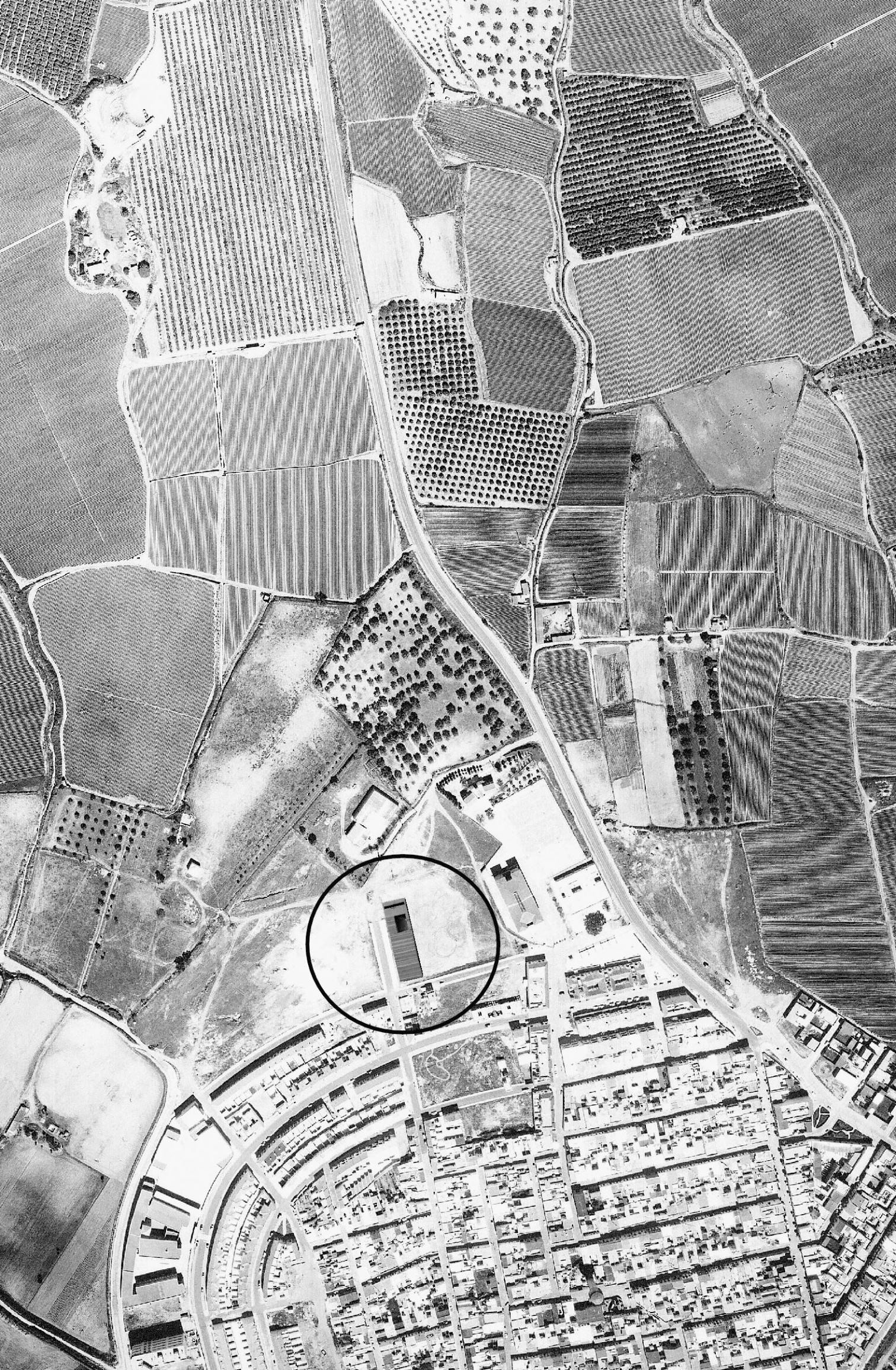 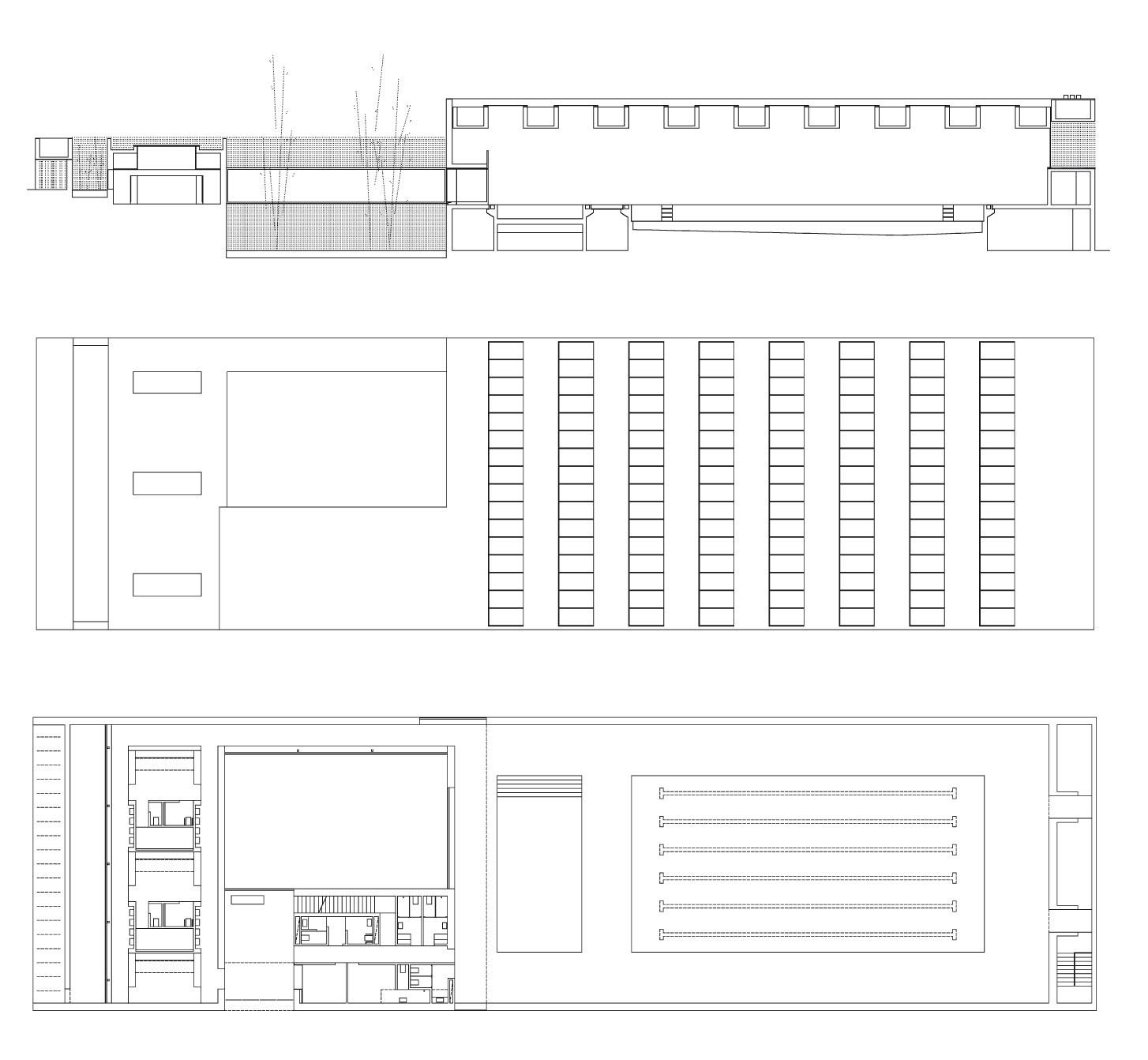 The most prominent building in an area for sports activities north of the city center, the brick and concrete volume manages to maintain a dialogue with its context via its two courtyards and the pool skylights.

The volume establishes the relationship with the exterior with two gestures: a vertical one, corresponding to the two courtyards carved in the interior, and a horizontal one, through deep voids open on both side facades. Slightly sunken, the swimming pool area takes up the basement and the ground floor, and also occupies part of a mezzanine in the upper level. Access is from ground level and through the west side. The access lobby, visually connected with the central courtyard, articulates the circulations defining two areas: the first one is for swimmers and includes changing rooms illuminated through the side courtyard – where bamboo stems have been planted –, the tunnel of access to the pools, which wraps the central courtyard, and the space of the swimming pool itself next to storage areas for sports equipment, restrooms and showers; the second is for the general public and leads to the mezzanine, where one can enjoy the views onto the swimming area and the exterior landscape, and to the management and administration areas.

A sequence of skylights covers the main area, capturing light throughout the day and acting as the building’s lighthouse at nightfall, when the pool is still in use. In the same way, it is also possible to contemplate the exterior landscape from the water and through a large window towards the south and the opening on the northern wall, from which one can see the tree tops adorning the central courtyard. 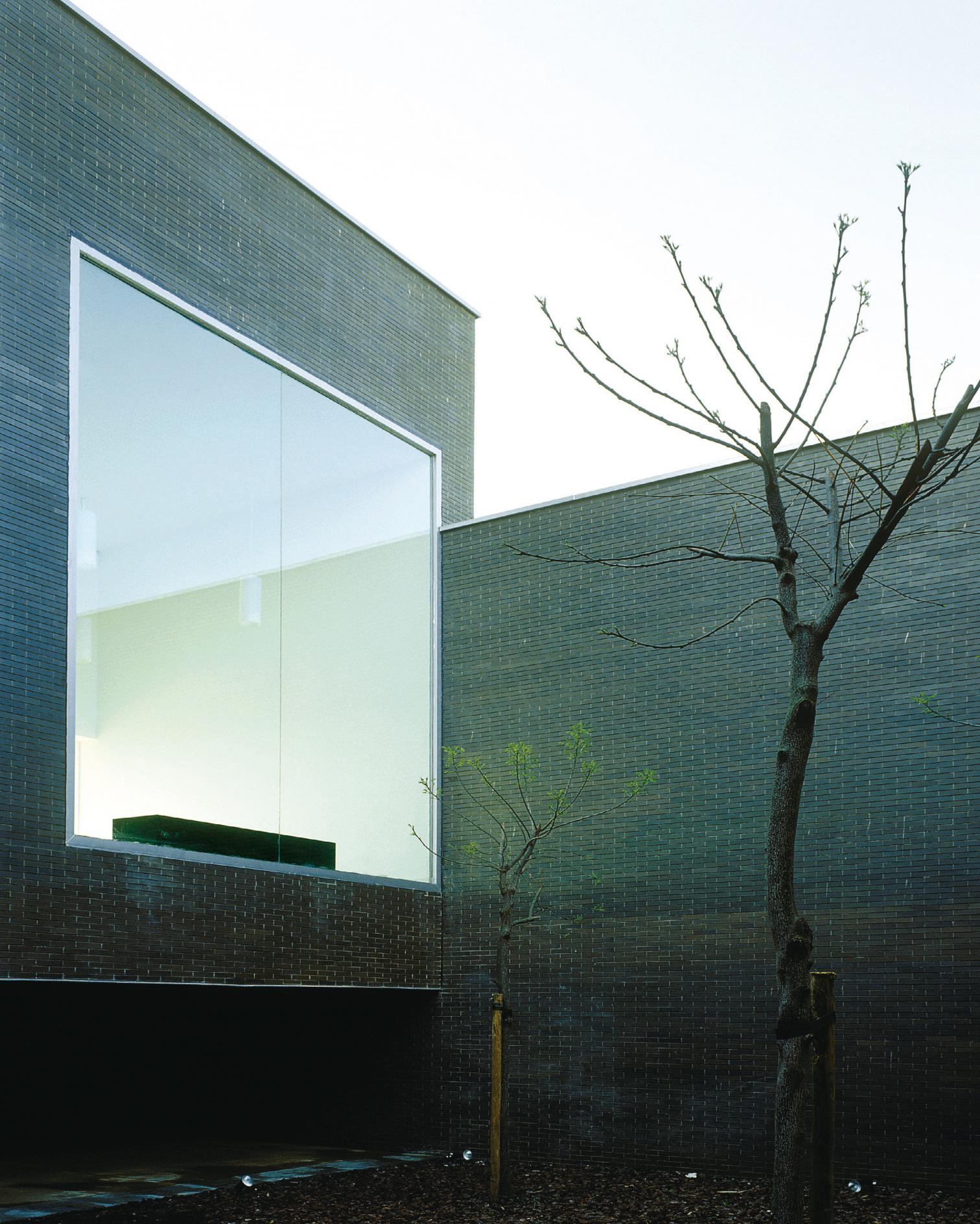 A system of prestressed concrete box-beams covers the pool space; the rest of the volume is supported by a mixed structure of concealed beams and columns and metal profiles at specific points where they can be perceived as part of the framework. One-way slabs of self-bearing joists are used in the ground floor and mezzanine, except for the cantilever, the corridor leading to the pool and the roof beneath the southern window, the undersides of which are finished off with slabs of exposed reinforced concrete. 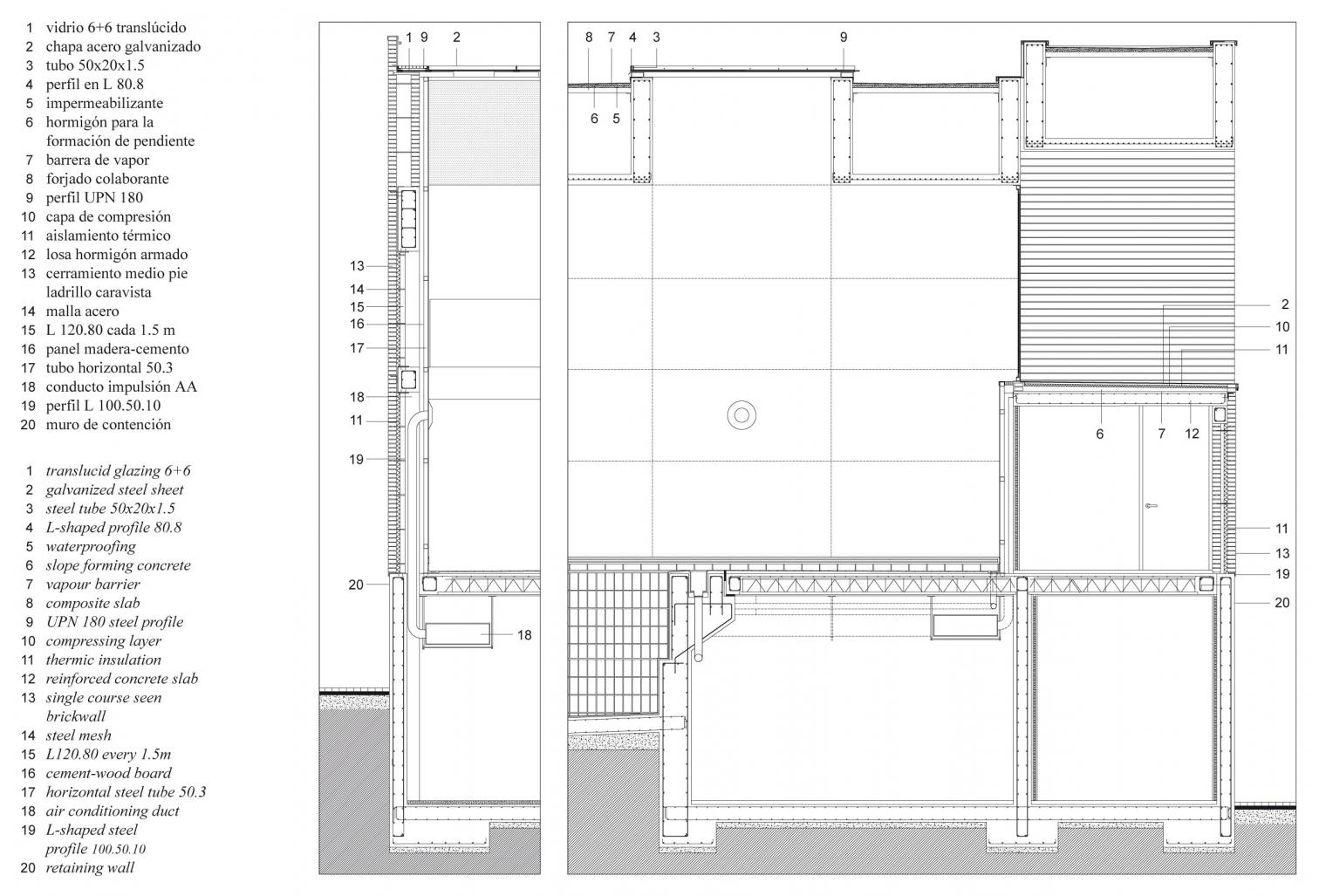 Harald Schöenegger Ignacio Laguillo   Spain   The new courthouse of the town of Antequera, in Málaga, goes up in a recently developed residential neighborhood. Because it was very difficult to establish a dialogue with the surroundings, the new scheme proposes a contained and compact architectur

Harald Schöenegger Ignacio Laguillo   Spain   The new courthouse of the town of Antequera, in Málaga, goes up in a recently developed residential neighborhood. Because it was very difficult to establish a dialogue with the surroundings, the new scheme proposes a contained and compact architectur

Ramón González de la Peña   Spain   To the east Jerez’s urban center, the area for which the Sports Pavilion was designed in 1997 already had several sports installations, as well as others in progress, following a defined layout. During the construction period, they underwent a period

For the headquarters of the sports equipment and accessories manufacturer Amaya Sport in Noain (Navarre), the architect Josean Ruiz Esquiroz – who works from offices in Madrid and Gorraiz – reused ten shipping containers as structural pieces while st

CHS arquitectos   Spain   The new industrial  processes, more concerned with the environment and less dependent on large machinery, are leading to a substantial transformation of the buildings in which they are installed. Far away from the great structural displays to wh

Valero and Art in the Bowels of a Garden

Sports Ring in the Tagus basin