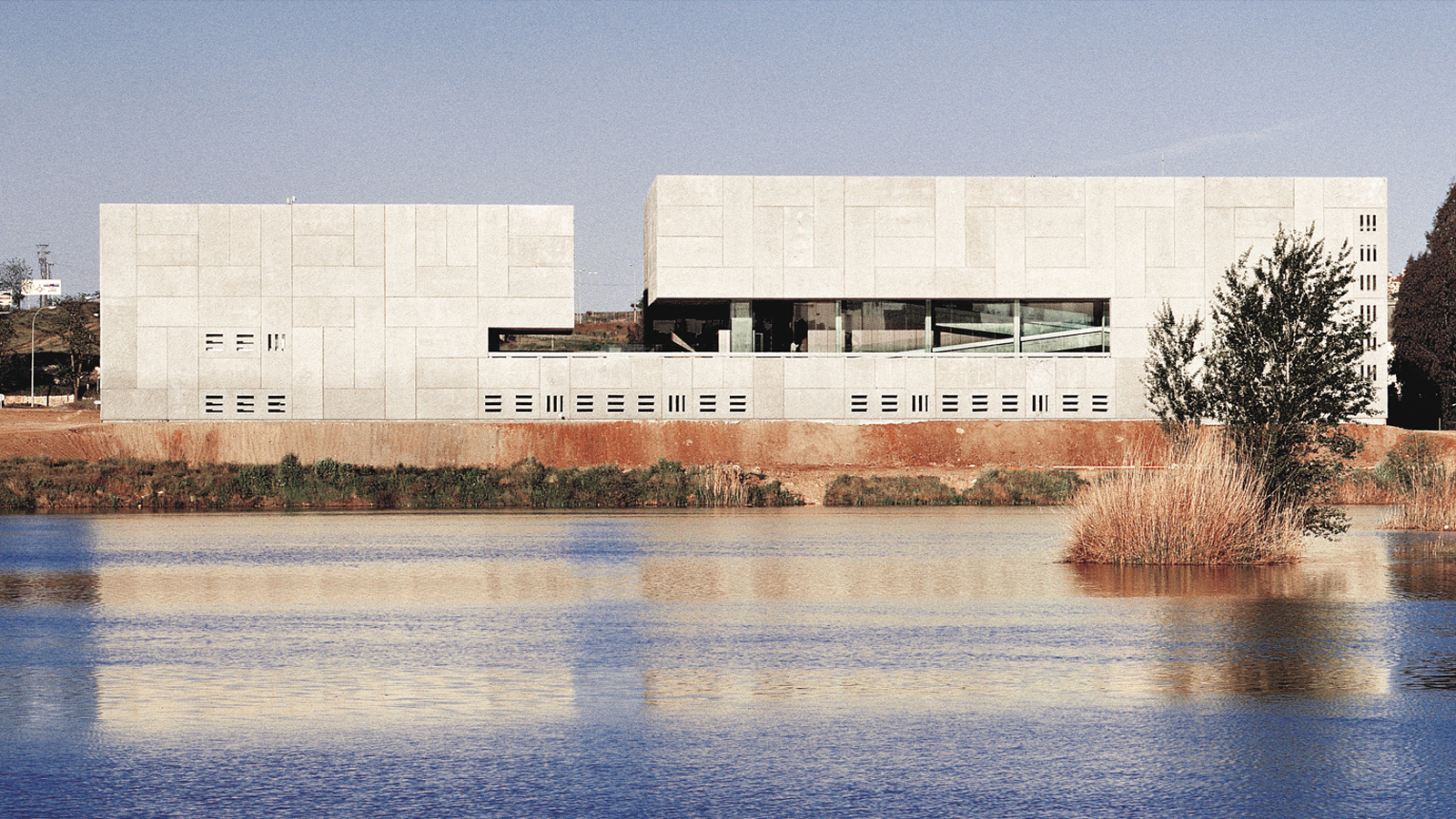 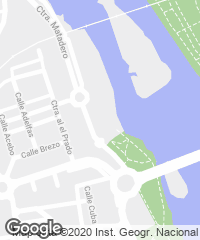 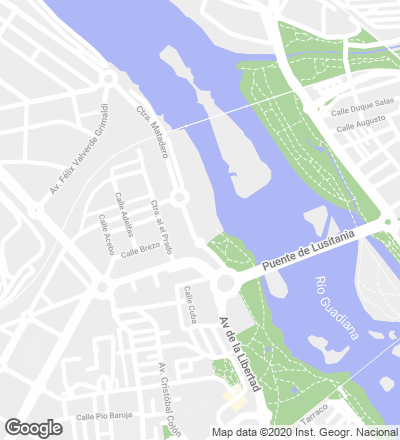 With a dense program that includes an auditorium for music, theater, opera and an exhibition hall, the new congress center of Mérida has, above all, a strong symbolic load. Located on the banks of the Guadiana river, between the bridges of Ferrocarril and Lusitania, it takes on its public and institutional function with a compact and expressive volume that aims to be timeless, as a vestige of the past that looks over a city that is old and modern at the same time.

Settled over the western bank of the Guadiana river, the congress center is conceived as a massive volume that folds to generate both its main halls and the areas of relationship with the city and the river.

The building has been conceived as a unitary and massive piece that bends over to define, amid its filled and void areas, a raised public terrace that connects river and urban fabric, also articulating the essential elements of the program: the main and the smaller hall, and the exhibition area. The rule that generates the halls – the staggering and folding of the upper and lower slabs – is expressed in section by the continuity of the central void, that also allows both spaces to function independently of the exhibition areas, inserted in the plinth. 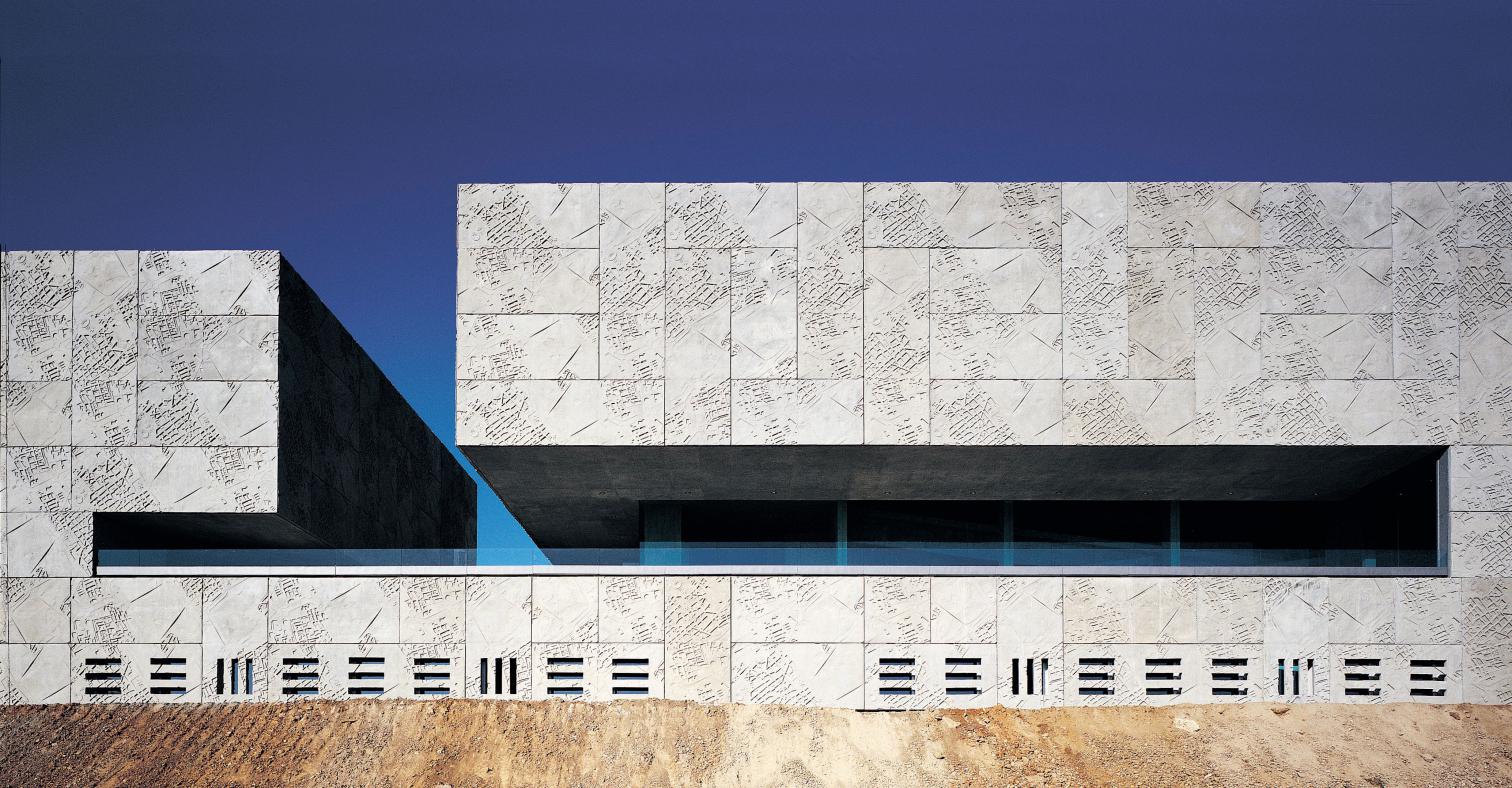 The main hall, seating one thousand people, has a rectangular floor plan on the northern side with stalls generated by slopes of changing inclination, which can be accessed from the street or from the platform. Along with the geometry and volume of the hall, the acoustic ceiling made of wood panels clad in zinc plates ensures the best acoustic conditions. The smaller auditorium, on the southern side, includes behind the stage a wide glazed entrance that is linked with the courtyard of access: a zinc gate closes the hall when events are held and shows, when open, the horizontal section that traverses the entire building. The areas for exhibitions and lectures, conceived as a modular sequence of empty spaces, are arranged in the ground and lower-ground floors. 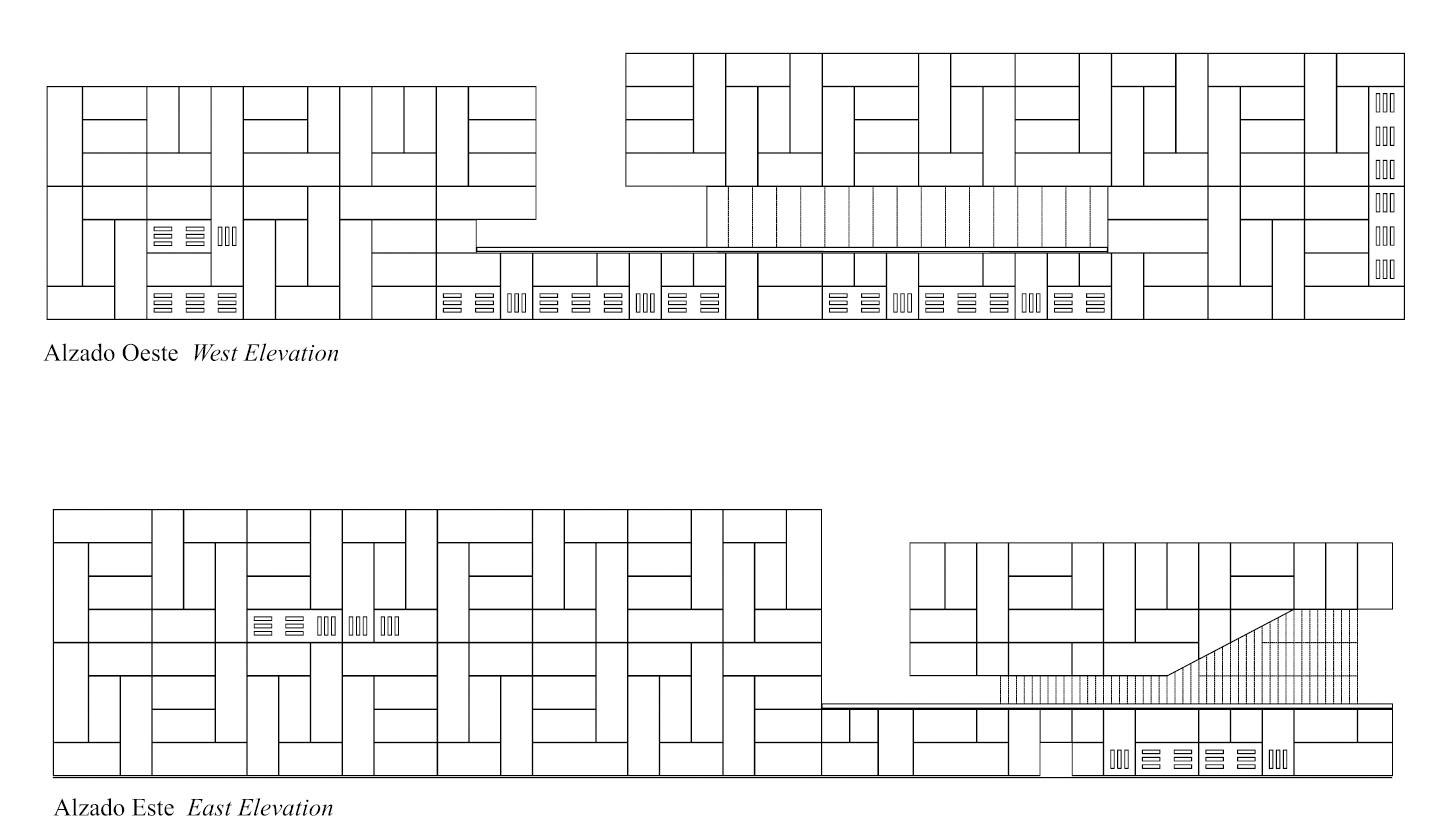 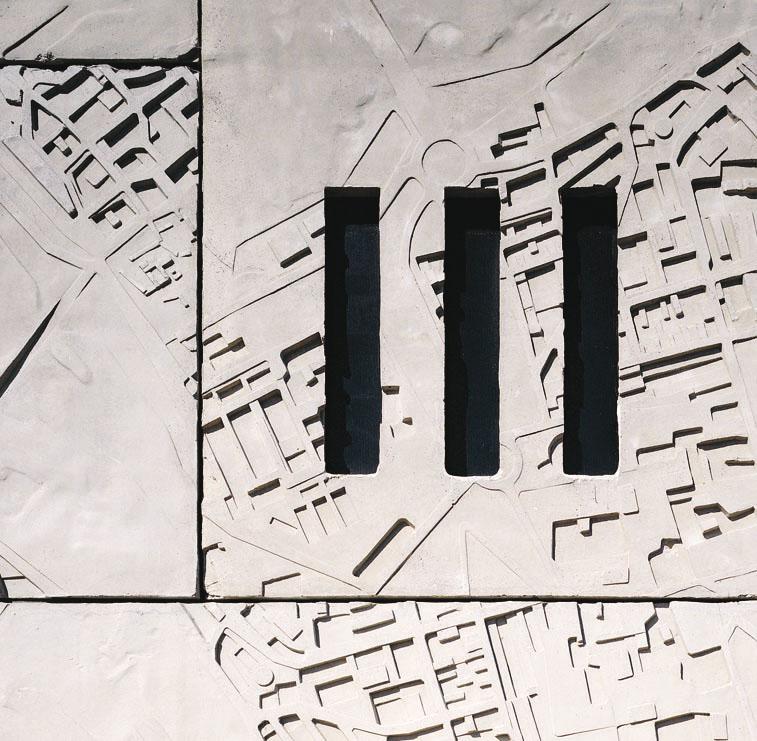 The stone quality of the building’s facades is achieved by way of a cladding of prefabricated concrete slabs, which are engraved (using a formwork of rubber molds) with a fragment of the city plan. 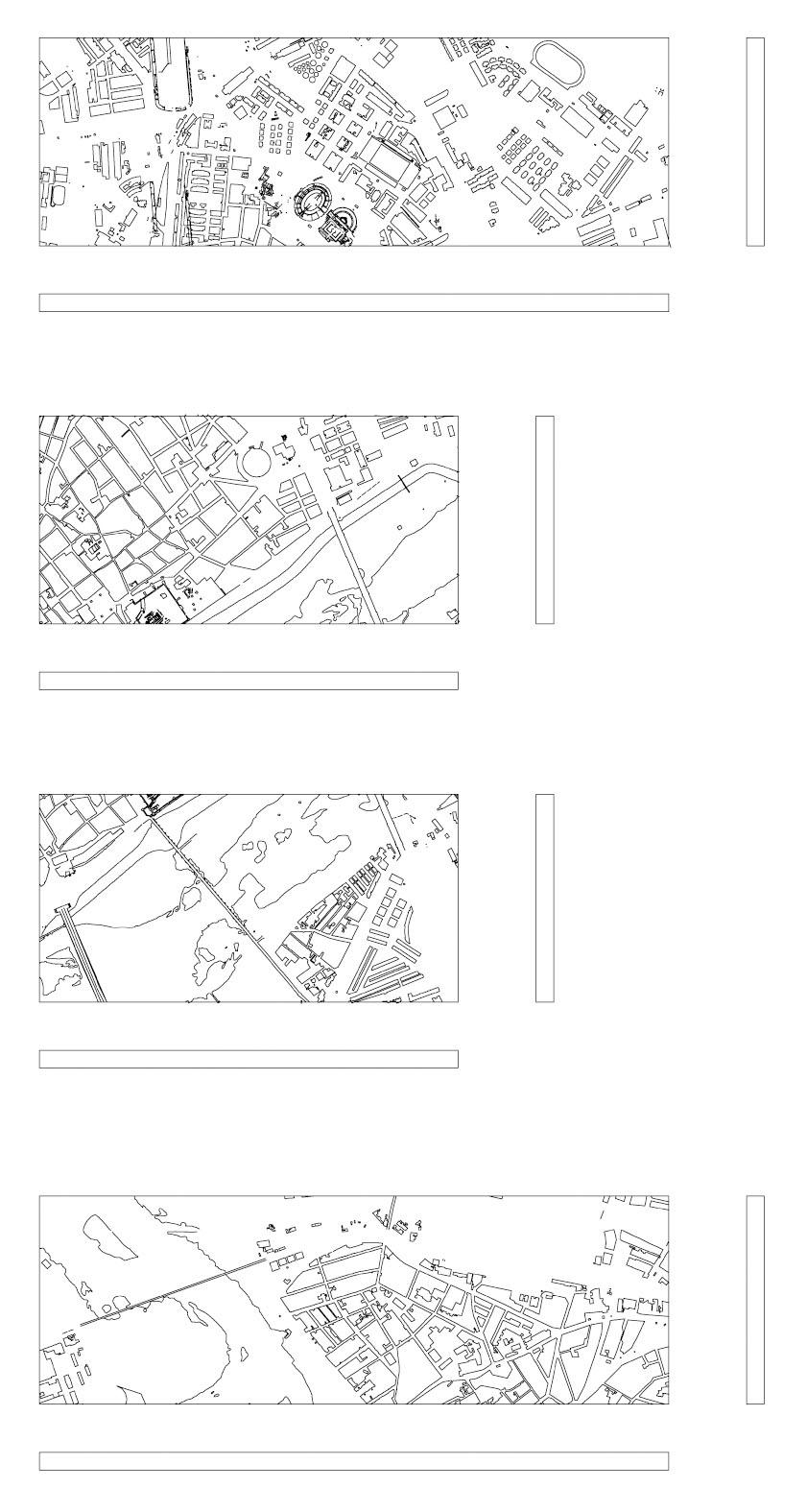 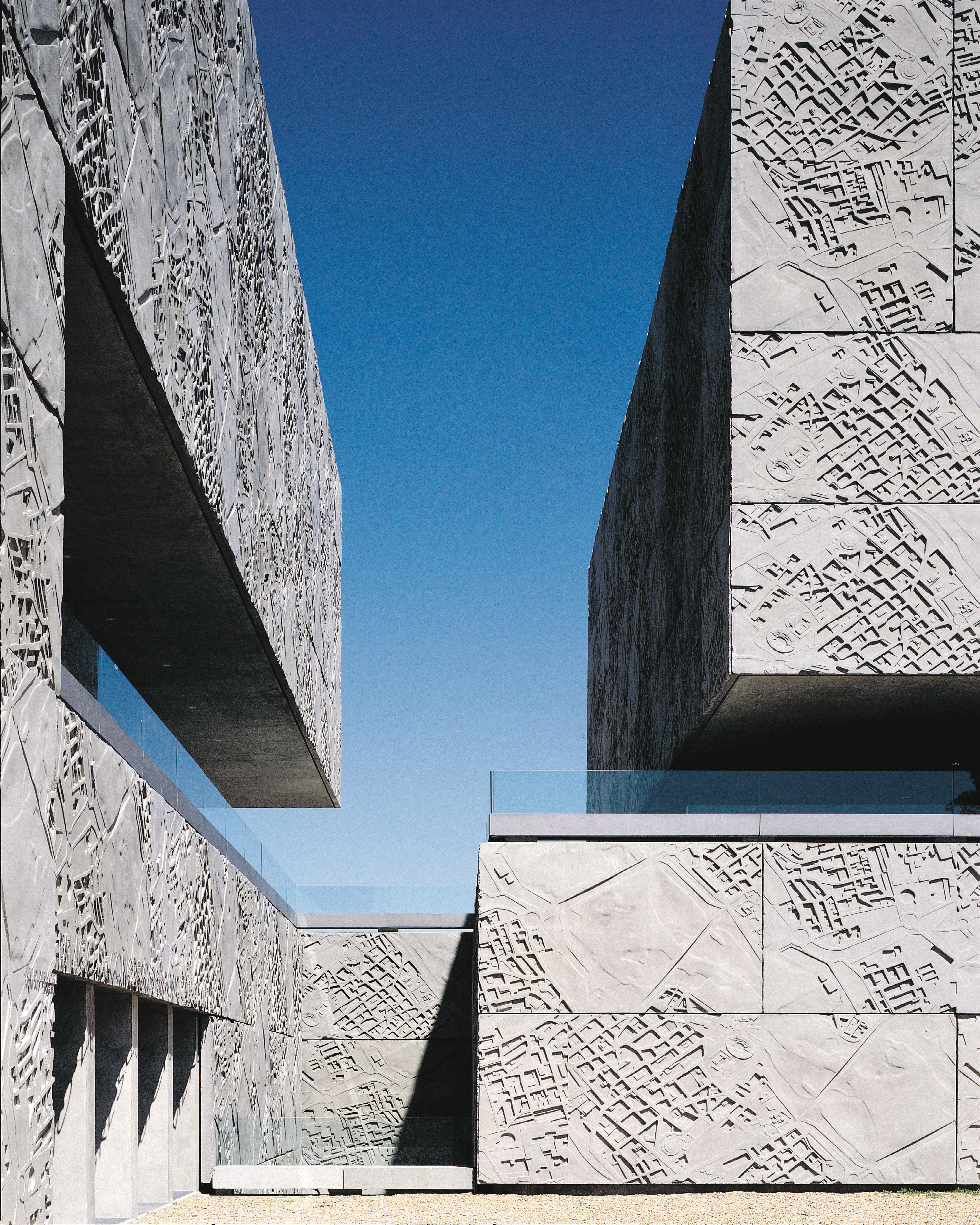 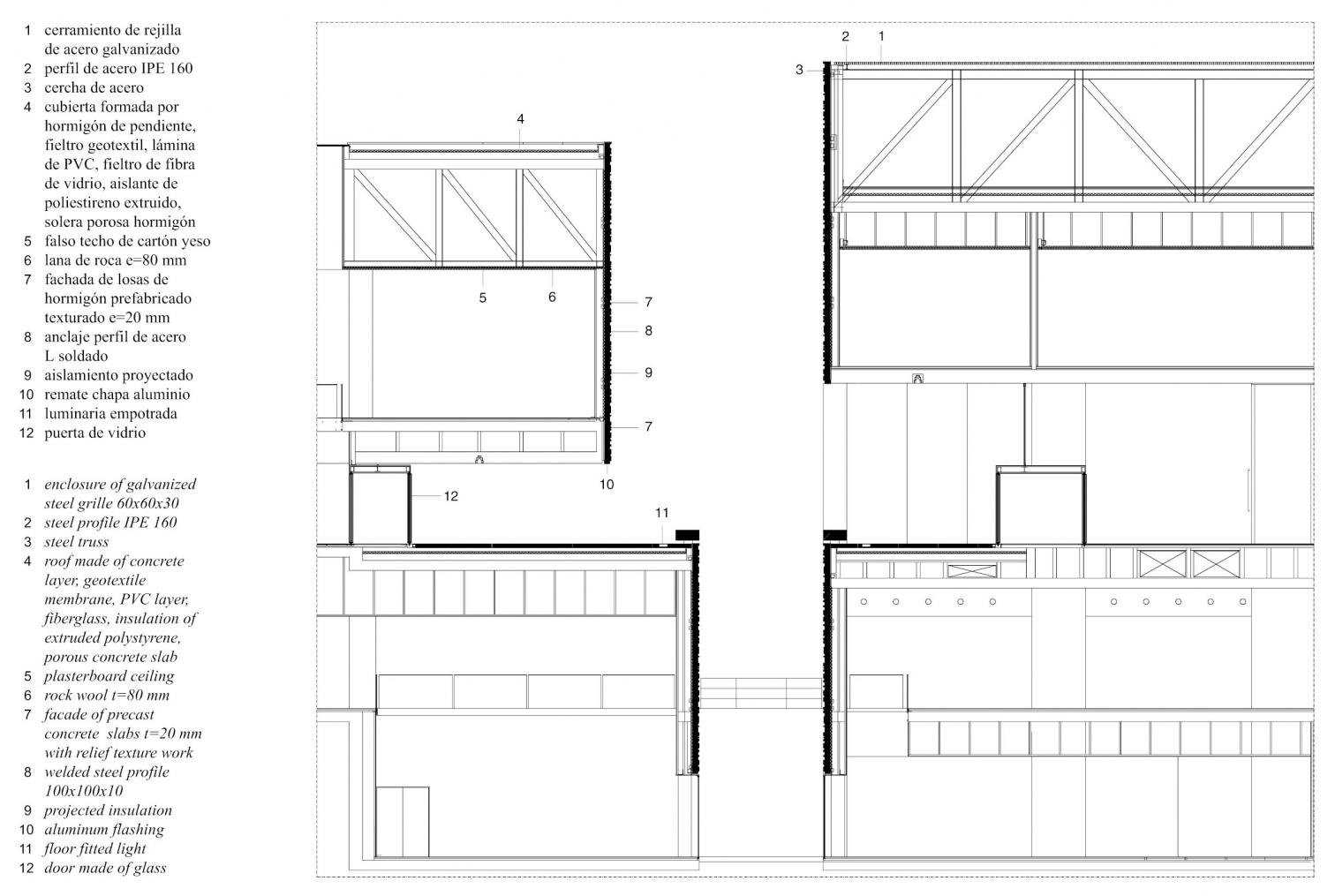 The facades of the prism, that give the auditorium a solid appearance, are in fact built from a structural and modulated framework of reinforced concrete that supports a cladding of concrete panels, prefabricated this time. Like the opus incertum of the Roman factories, this material is strongly pigmented and bears a peculiar texture: the sculptor Esther Pizarro has carried out a bas-relief inspired by the city plan that, developed in five rubber molds, can be combined in four different ways. The building thereby shows a rough exterior face that contrasts with the polished interior finish, of metal and glass, that clads the two halls of the auditorium. 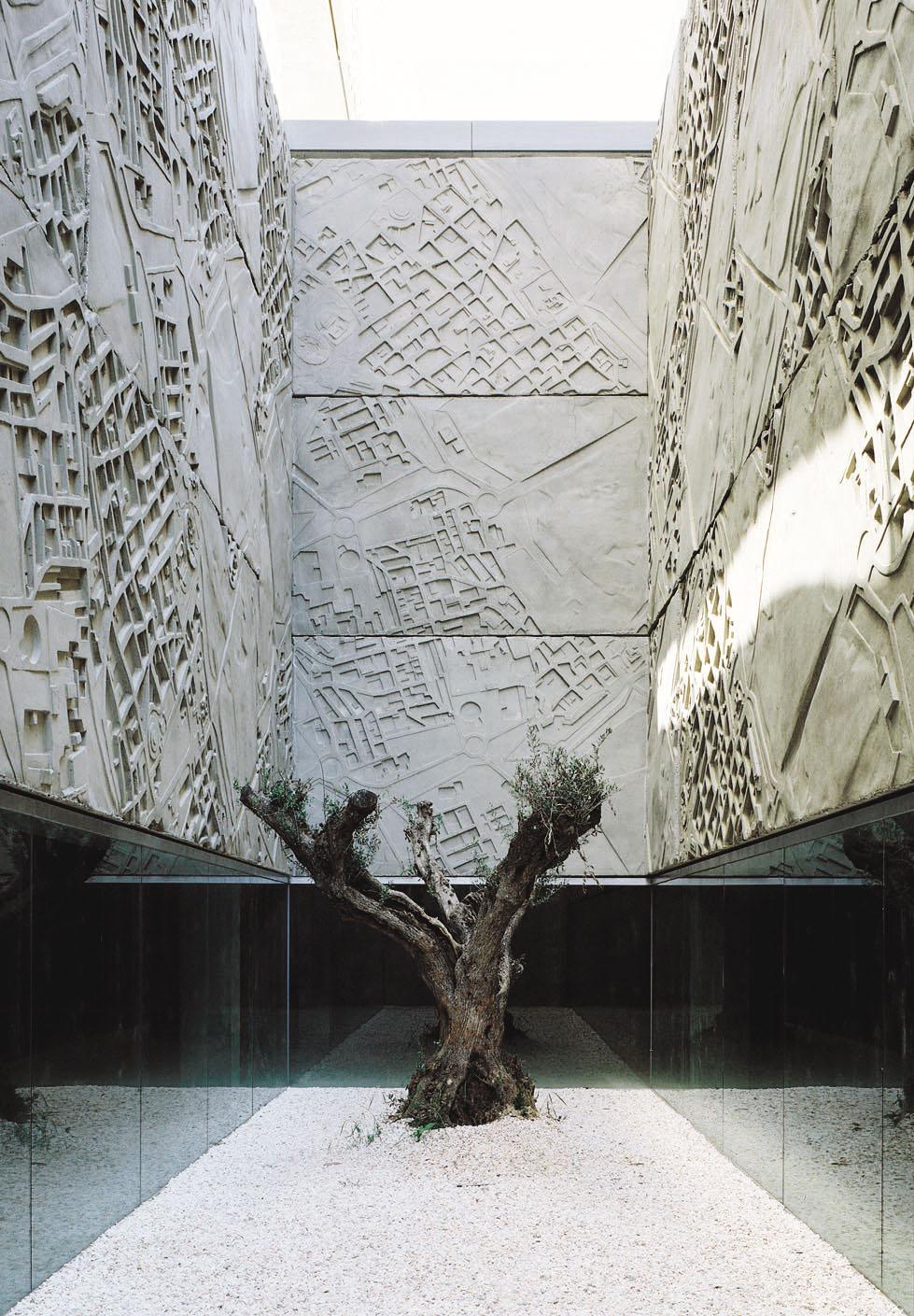 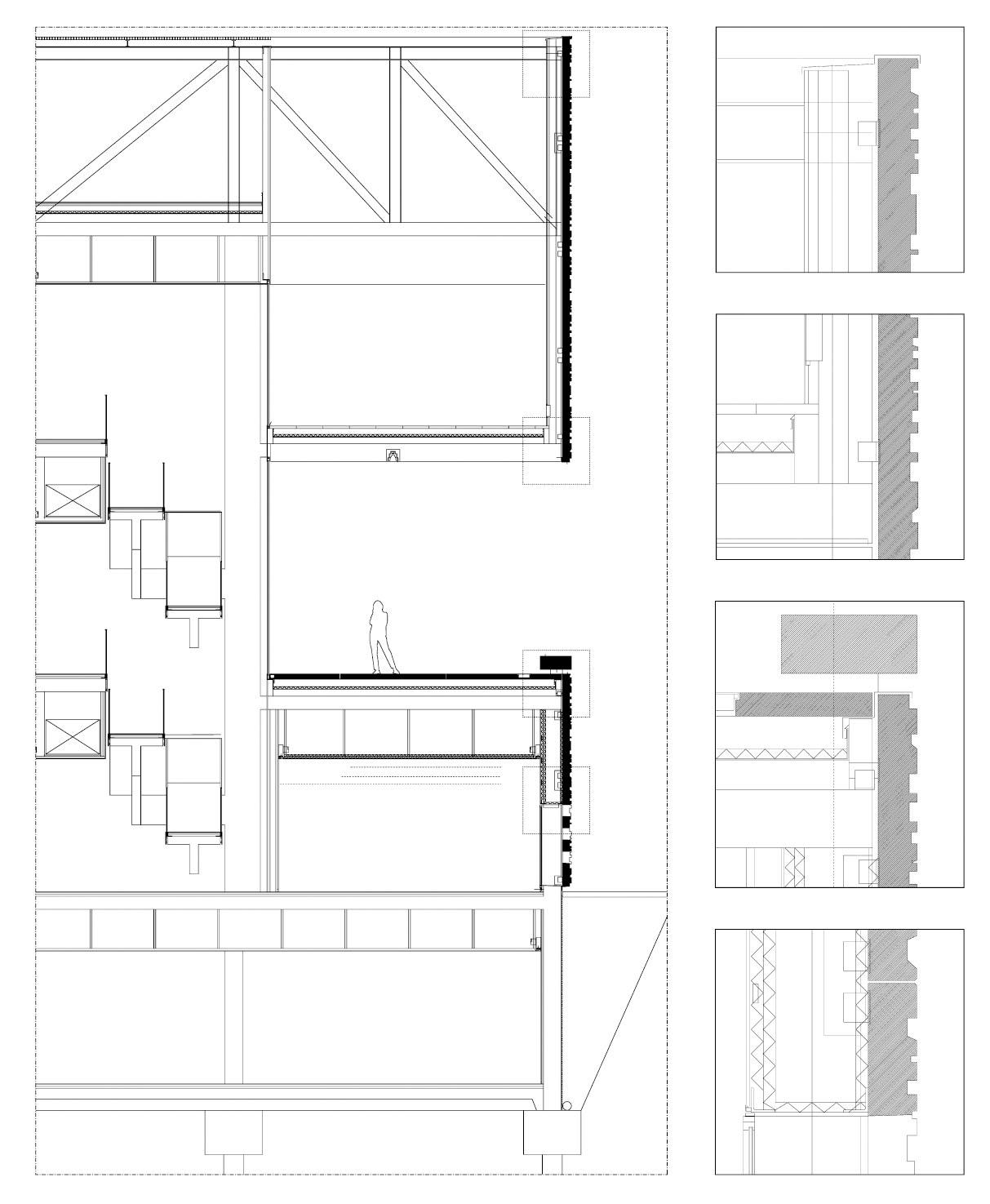 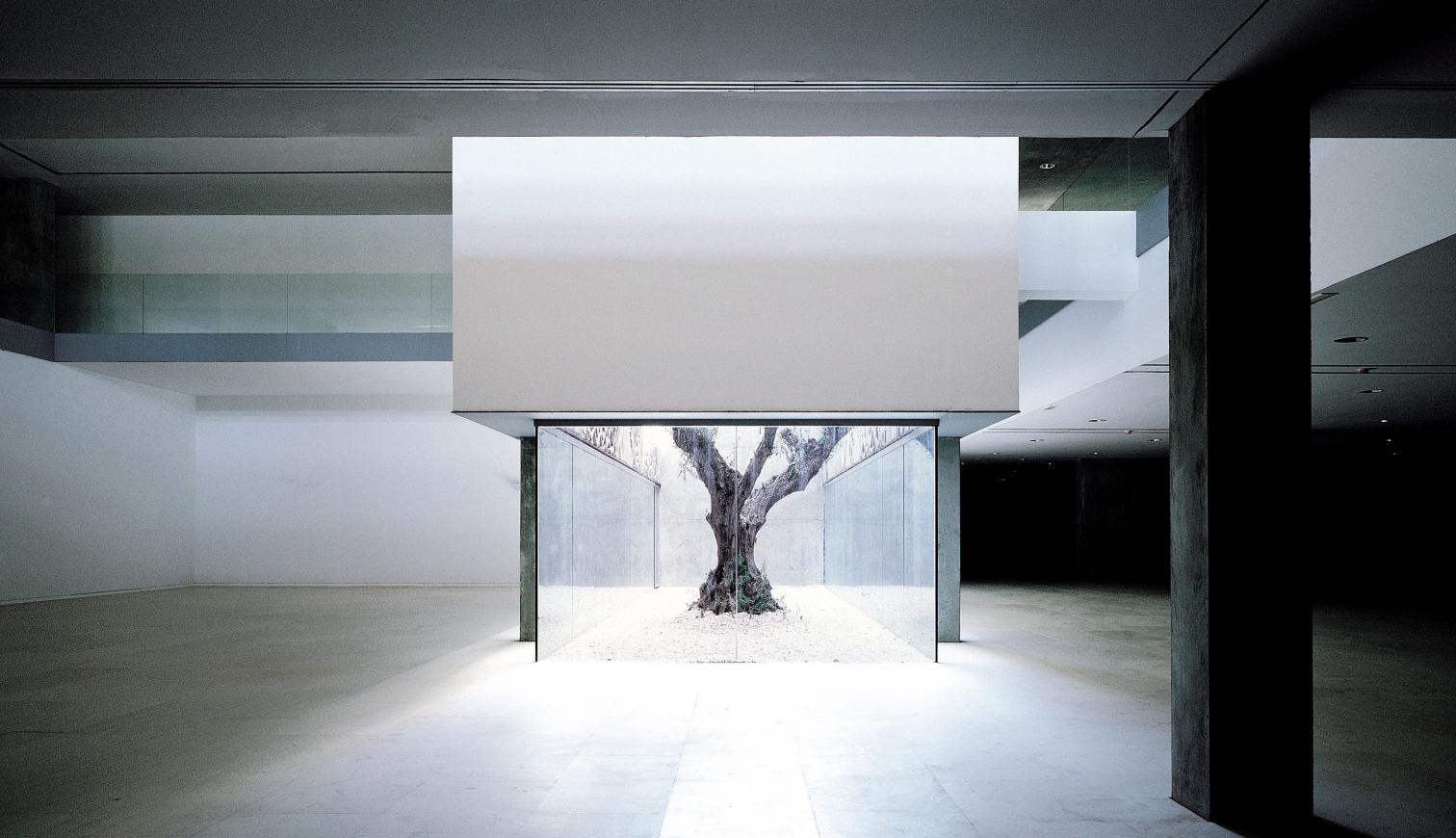 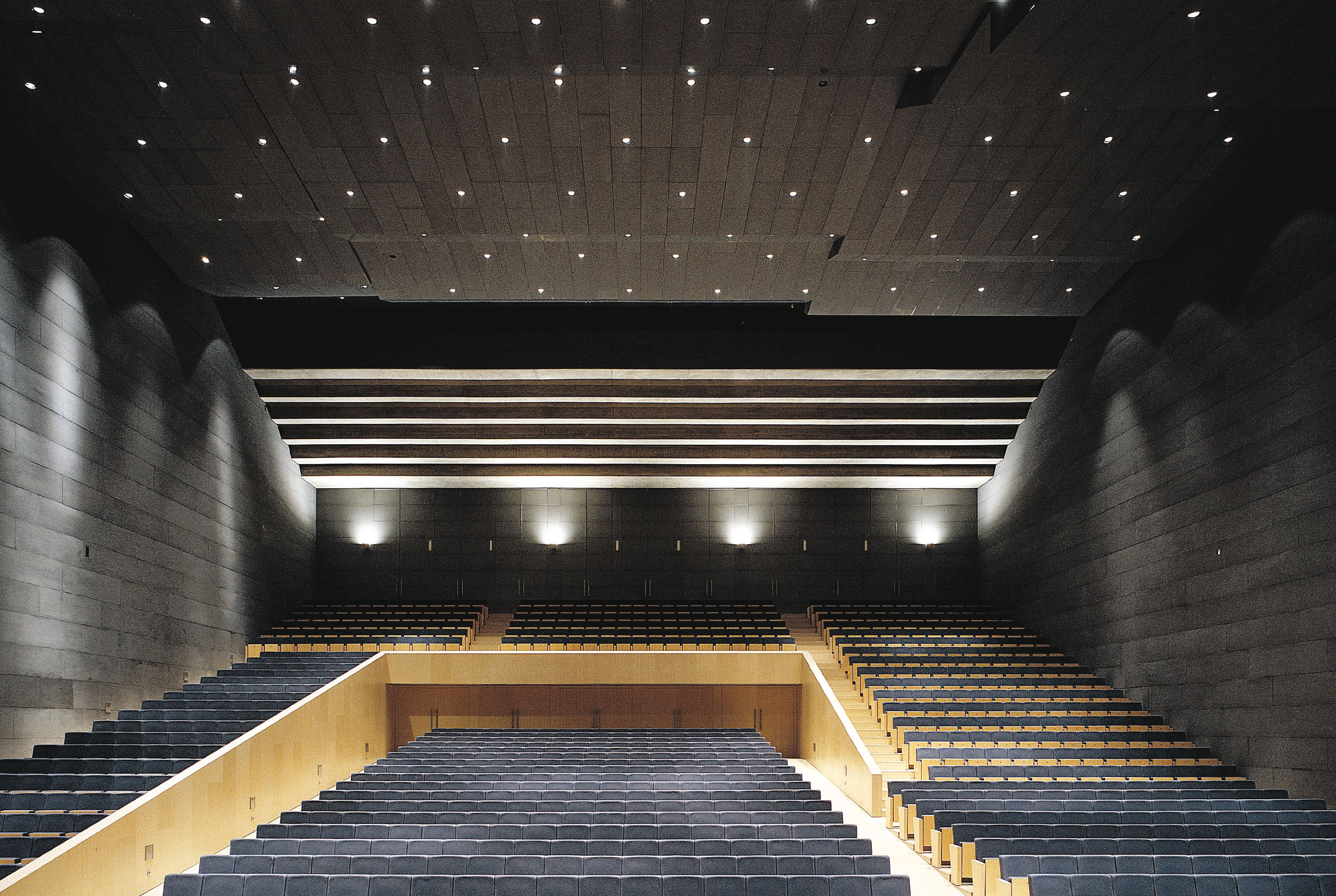 Nieto Sobejano   Spain   Walking through the Vegueta quarter one can easily see the original urban structure of a city – Las Palmas de Gran Canaria – which has undergone several transformations in its later expansions. Going through its narrow streets and passing by the trad

Nieto Sobejano   Germany   A frontal cut travels vertically through the hotel, creating a series of compressed and expanded indoor spaces, visually connecting the public zones of the programme and letting daylight inside as well as the views towards Karlsplatz.

Nieto Sobejano   Estonia   The new center devoted to the Estonian composer preserves the pines in the woods around it, aiming in this way to foster dialogue between architecture, music, and natural environment.

Nieto Sobejano   Estonia   Over a unitary roof that folds to adapt to the varying heights required inside the building, a series of pentagonal courtyards of different sizes and positions manage to preserve the existing trees in the dense forest around the center. The facades,

Nieto Sobejano   Netherlands   The terrains of an old timber factory in the city of Groningen are becoming an important area of growth. One of the several interventions under way there is the De Linie plan, a scheme for the construction of single-family dwellings for which sixteen

Nieto Sobejano   Spain   The romantic image of the ruins, so often rejected as nostalgic and anachronistic, is capable of transmitting, however, not only the evocative power of the constructions of the past but also the destructive force of time and nature. In this duality -