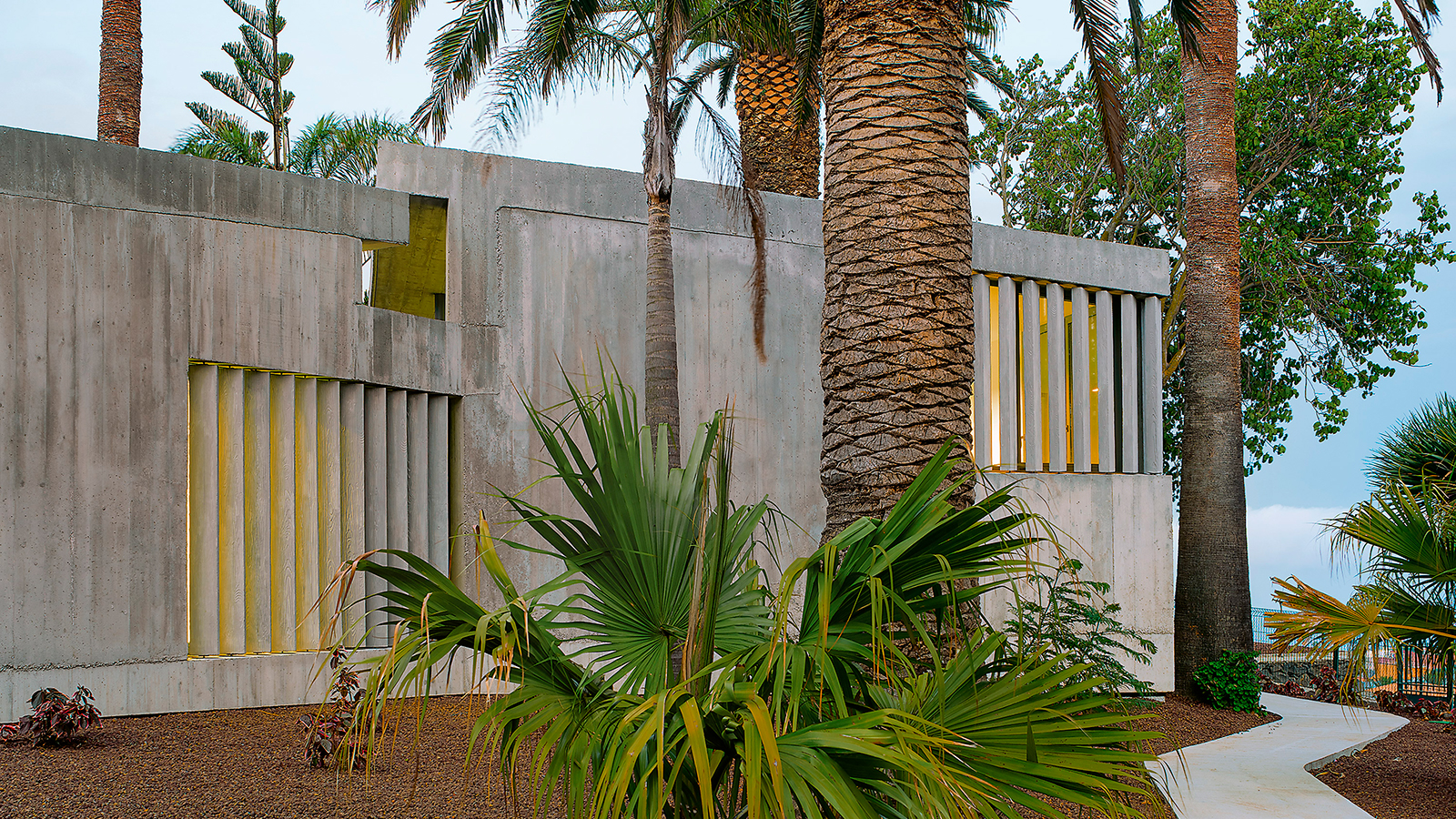 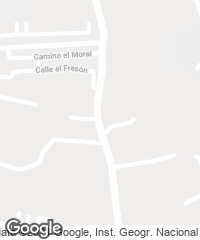 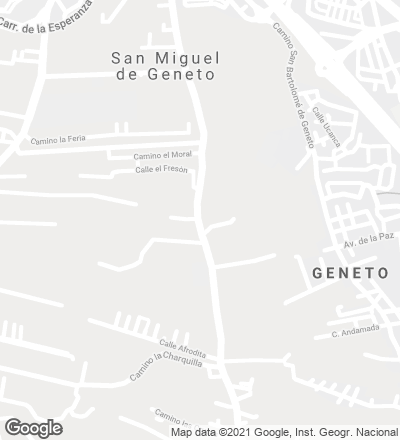 The Hermanas Hospitalarias del Sagrado Corazón de Jesús (Sisters Hospitallers of the Sacred Heart of Jesus) is a female catholic congregation founded by the Italian priest Benito Menni (1841-1914) in the municipality of Ciempozuelos (Madrid), and whose activity is centered mainly on psychiatric care, mental health, and intellectual disability. Today the congregation manages more than 370 centers around the world, with over 11.000 employees and the collaboration of a large number of volunteers. 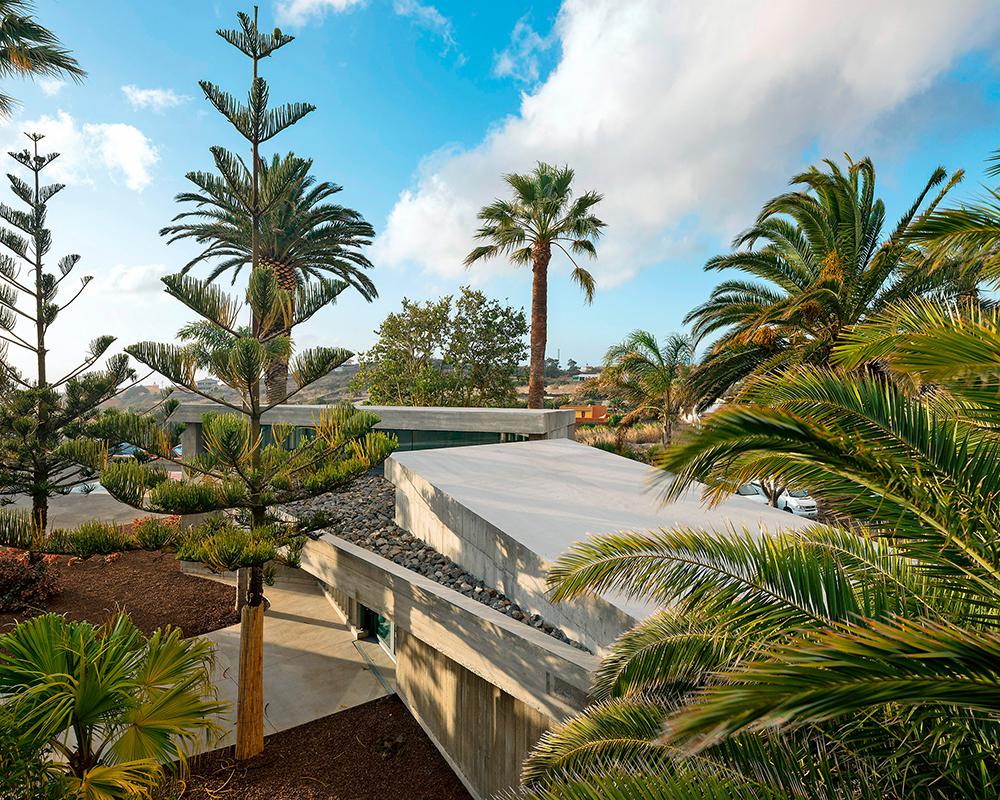 The Acamán Complex, whose origin goes back to the seventies decade of the past century, is located in San Miguel de Geneto, outside of San Cristóbal de La Laguna and its historic center, declared by the Unesco as a world heritage site in 1999. Aside from a center for special education, the complex currently includes a daycare center, an occupational center, and a care center for people with brain damage.

The two-story school is an L-shaped volume that embraces a landscaped central space, facing south. In constant expansion and improvement, the new functional demands of the center called for the construction of a new pavilion for multiple uses as well as an – also small – adjacent storage shed, measuring 54 and 18 square meters respectively. 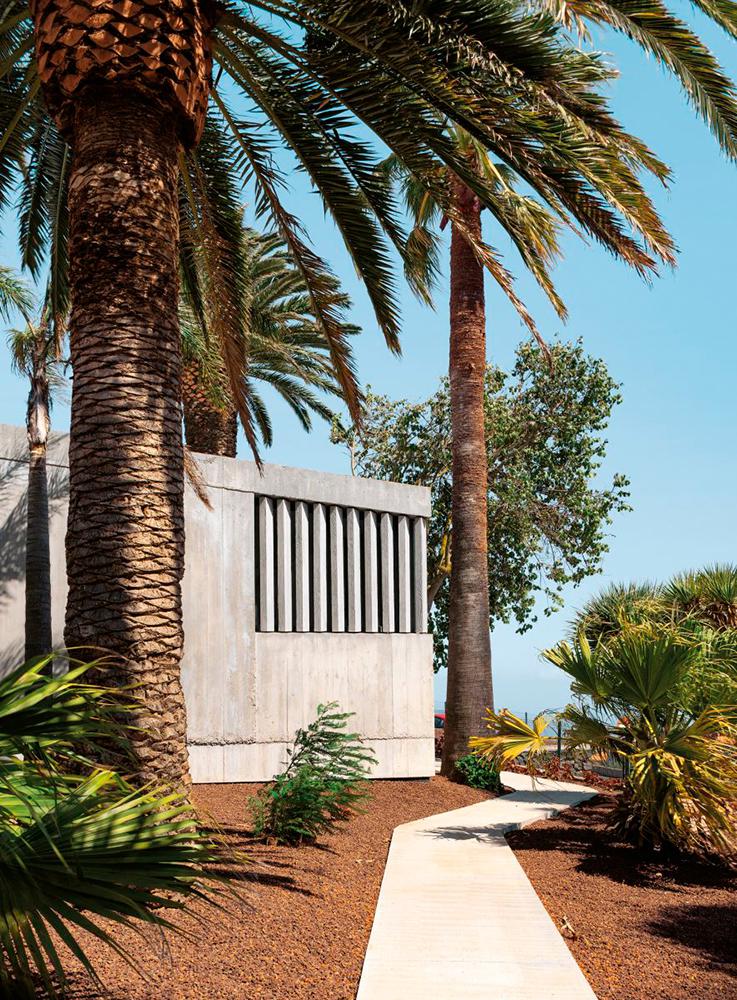 With direct access from the perimeter gallery and adjacent playing fields, the new building occupies an empty space in the garden, respecting the palm trees, conifers, dragos, and other trees and shrubs that have grown in the place over time. As if it were a ‘cabin in a forest clearing,’ the new building is a meeting space, reception area and gathering place for specific activities for small groups, articulated around a lobby beneath a flat roof that arranges two volumes with sloping roofs that rise and are placed over the flat one. 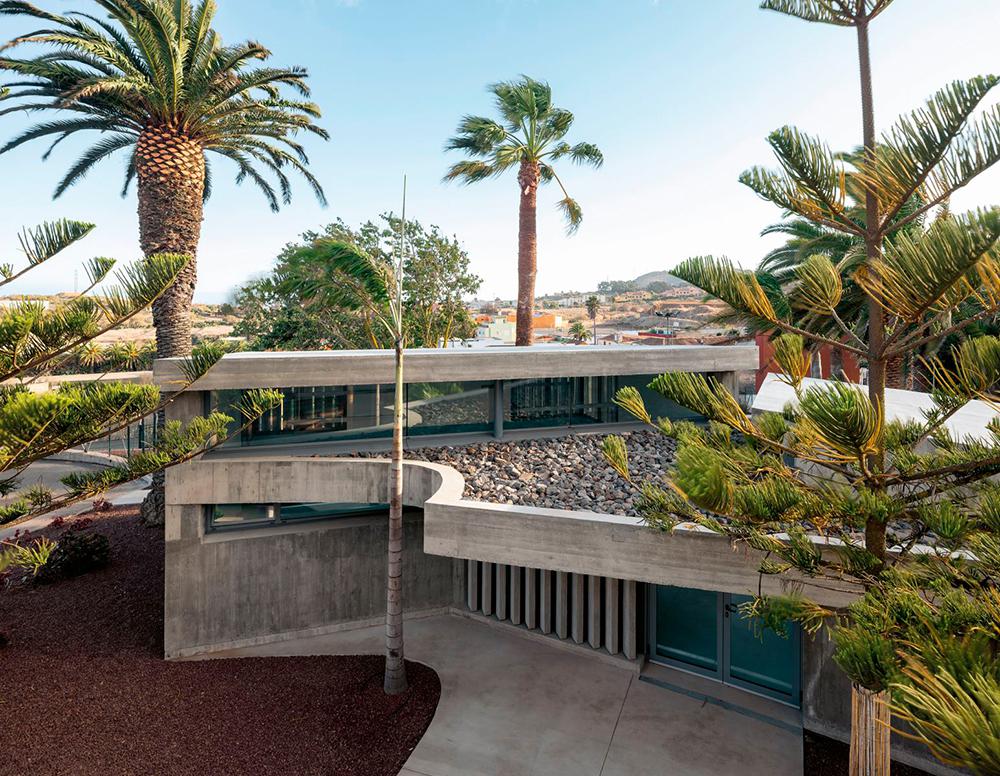 The construction, with an envelope of exposed reinforced concrete – the result of using a wood shuttering –, is complemented with a series of slats of similar texture. The interior space, with small openings through which daylight comes in, engages in dialogue with the exterior, equally rich in nuances, shades, and contrasts, clearly expressed in the artificial concrete object, the boldness of its articulated volumes and edges, and the natural fragility of the branches embracing it. 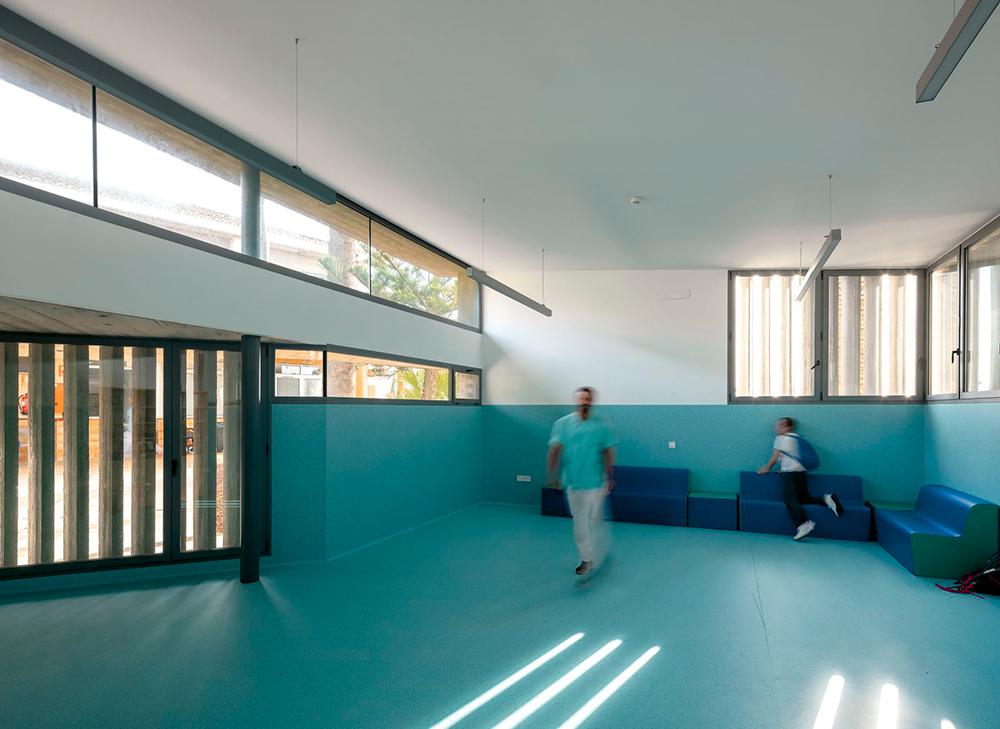 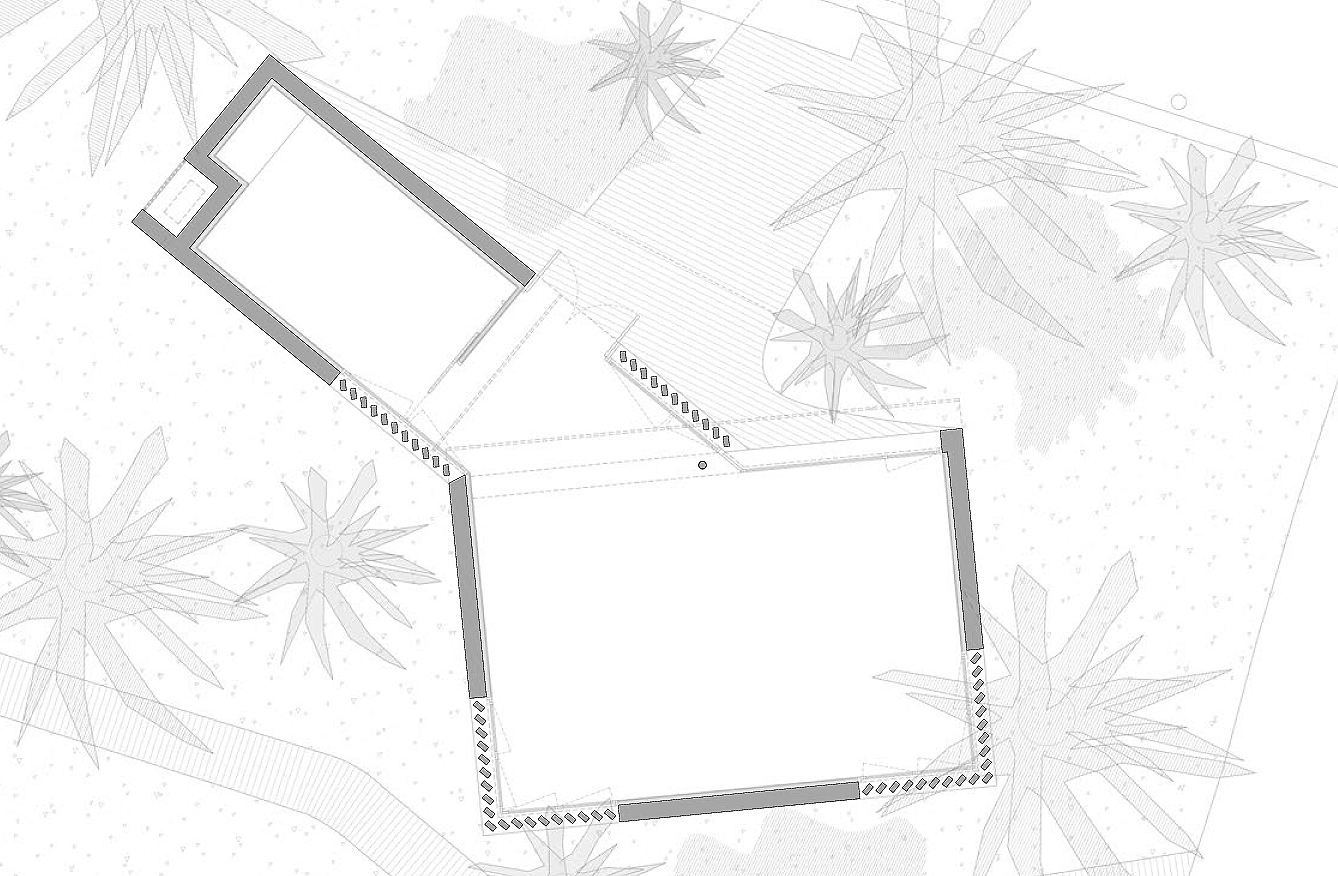 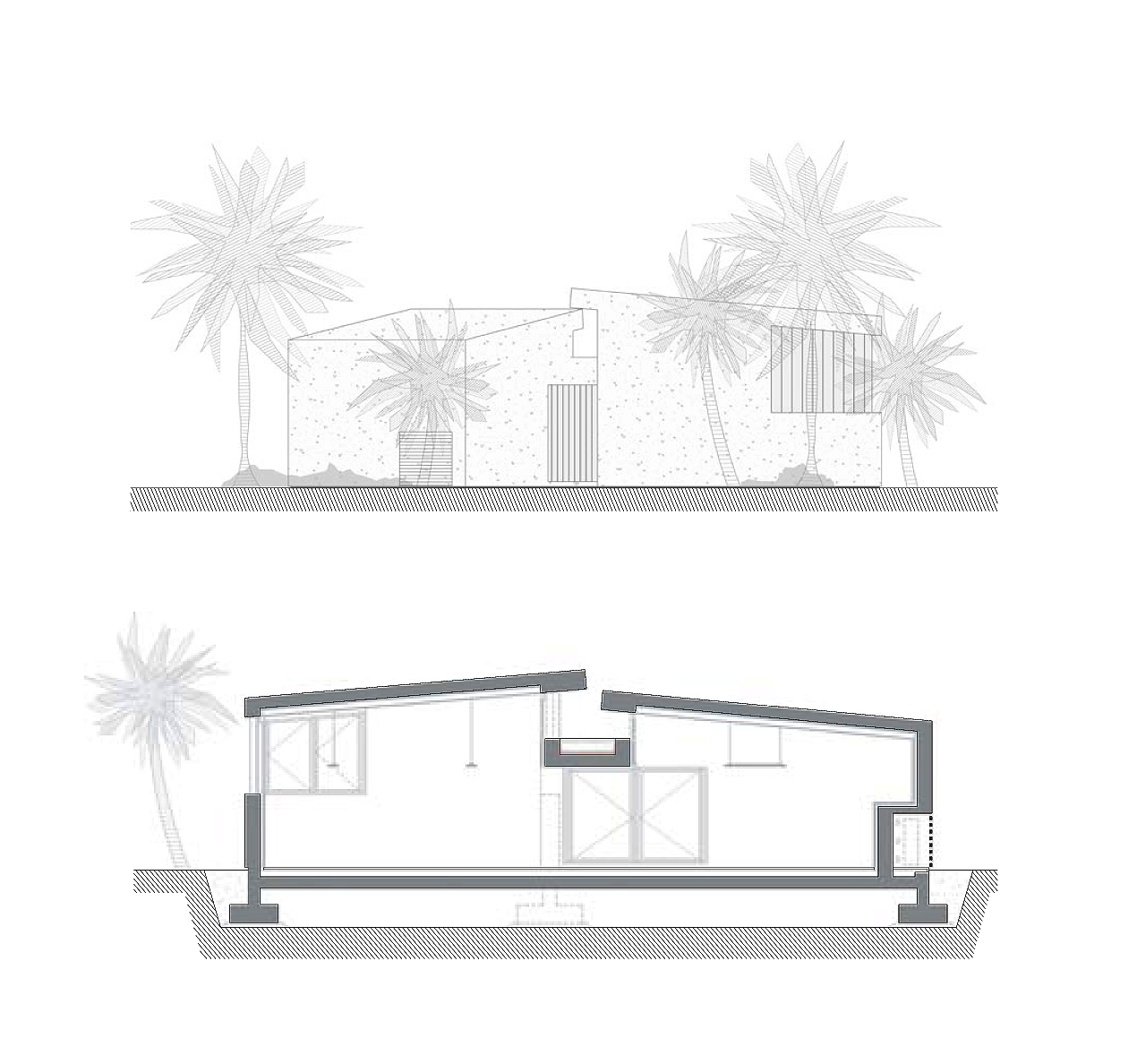 Eustaquio Martínez García Virgilio Gutiérrez   Spain   This residential development gave the opportunity to develop a new design for an existing project, with municipal approval and that includes the construction of 18 apartments by the sea, south of the island of Tenerife and close to the airport. The

Vicens & Ramos   Spain   Raised on a  plot in the historic center of the locality, the Jesús Ruiz School consisted of two freestanding pavilions with no link to the surrounding urban fabric. The need to renew its facilities has allowed to reformulate the relationship of this

Grüntuch Ernst Architects   Spain   In 2009, the Berlin studio Grüntuch Ernst won the competition to design the new German School in Madrid. Located in the recently developed neighborhood of Montecarmelo, to the north of the city, and taking up a plot of 34,000 square meters, the compl

Grupo Aranea   Spain   Located in Rafal, a municipality of 4,000 inhabitants south of the province of Alicante, some 50 kilometers from the capital, the high school goes up in a plot of less than 7,000 square meters, almost half of the standard established by the community