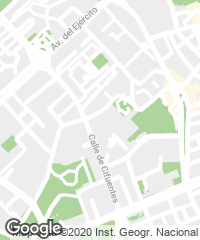 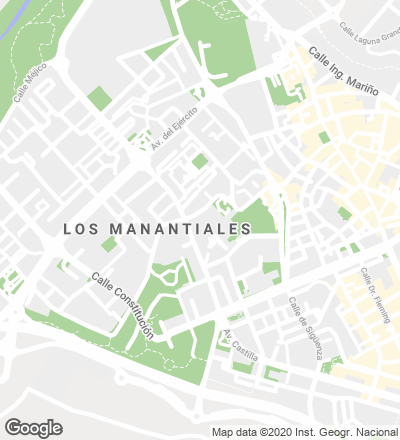 Half-way between the historic center and the periphery, in a blurred residential environment where repetition replaces hierarchy, it was difficult to find an external reference for the project. And the new auditorium does not look for one; it materializes the space for music and for theater that the program demanded through an interior order that does not depend on its context, though it necessarily belongs to it. 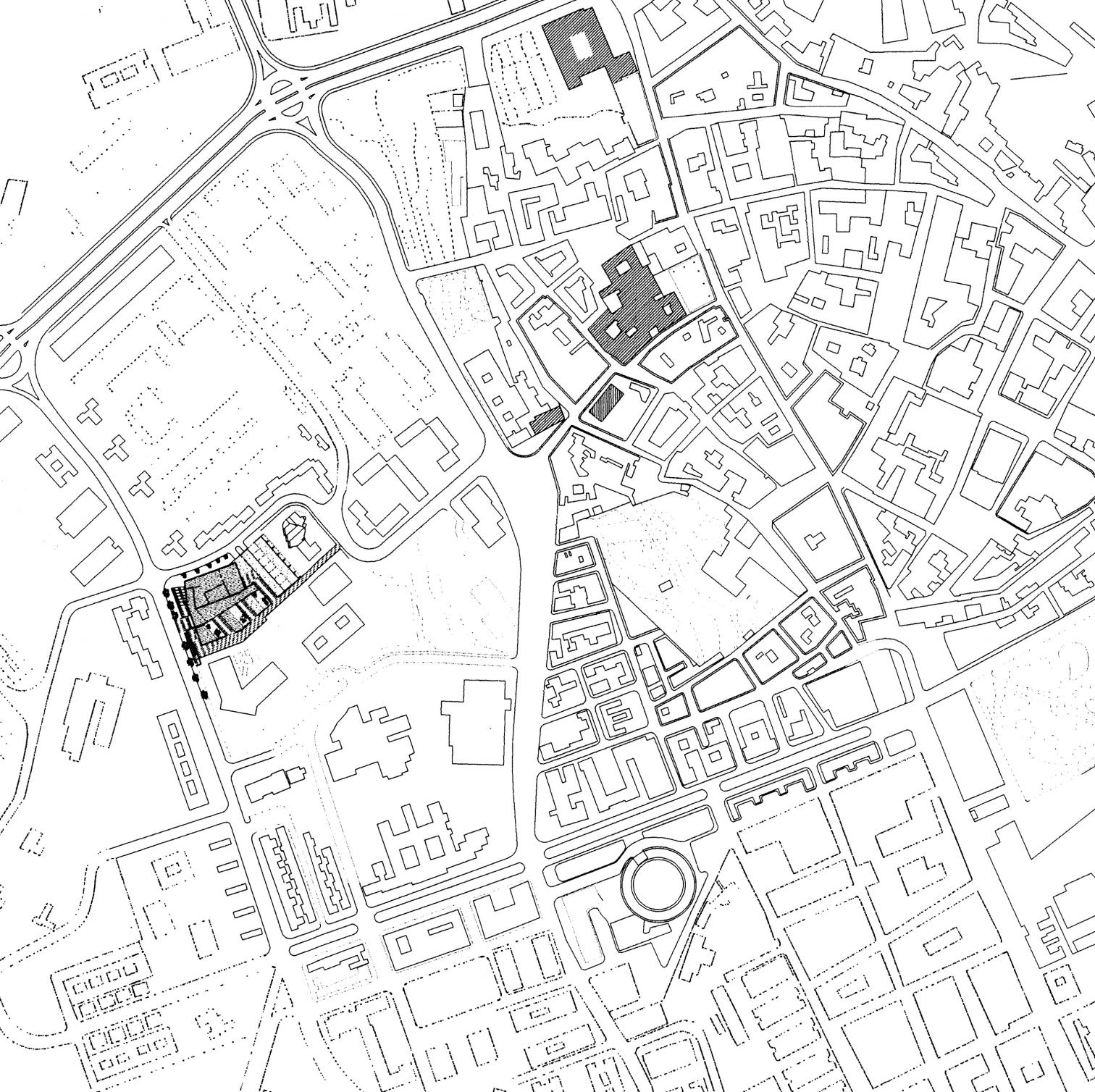 Located in a plot with a five-meter unevenness between ends, the building breaks the hierarchical logic that would usually place the main auditorium in the upper part and instead buries it partially, so the building acts as a retaining wall. The auxiliary pieces are at the back of the plot and the large auditorium governs the plot, starting at its lowest part and reaching its highest point right at the center of the complex. The exterior concrete walls, that have been given an ornamental treatment and possess a certain textile quality, enclose interiors that are generated from the convergence of three elements: lobby, halls and auxiliary rooms.

The project plays both with its material (the pattern on the concrete gives it a textile quality) and volumetric definition as well as with the links between interior and exterior, and between serving and served spaces. 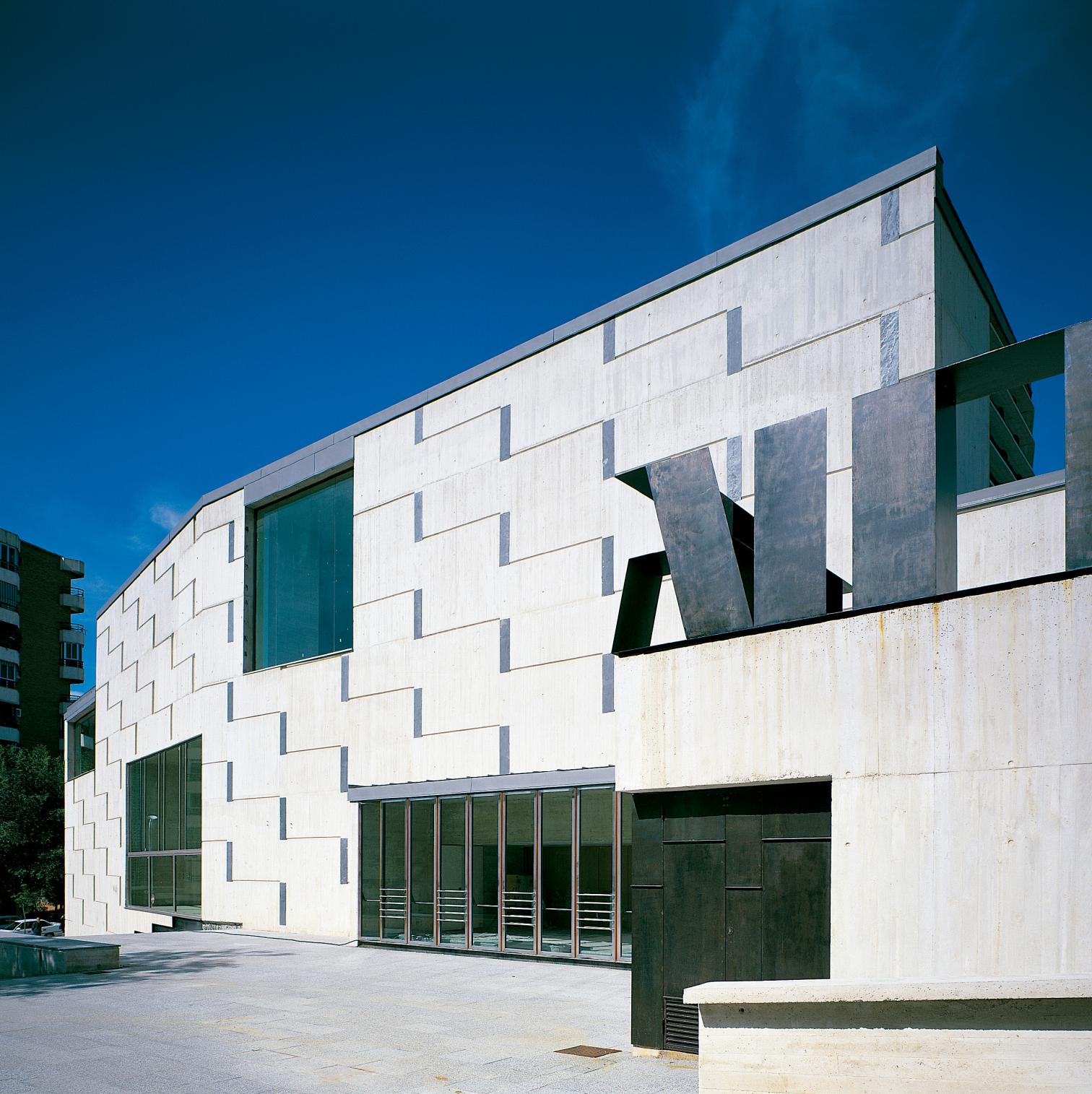 With a lateral position with respect to the halls, the lobby houses the system of ramps that connect their different levels; it is not only the backbone of the building, but it is also understood as a natural extension of the street. Here, the rough texture of the white concrete that forms the structural elements is counteracted by the warm wood covering the floors, walls and banisters, and also by the rows of lamps hanging from the roof slab. An extense latticework of concrete slats, slate and glass pieces acts as a facade for this space of circulation and gathering, separating it from the courtyards that correspond to the auxiliary areas – administration, cafeteria, dressing rooms and storage –, grouped on the north facade and laid out following a comb shape. 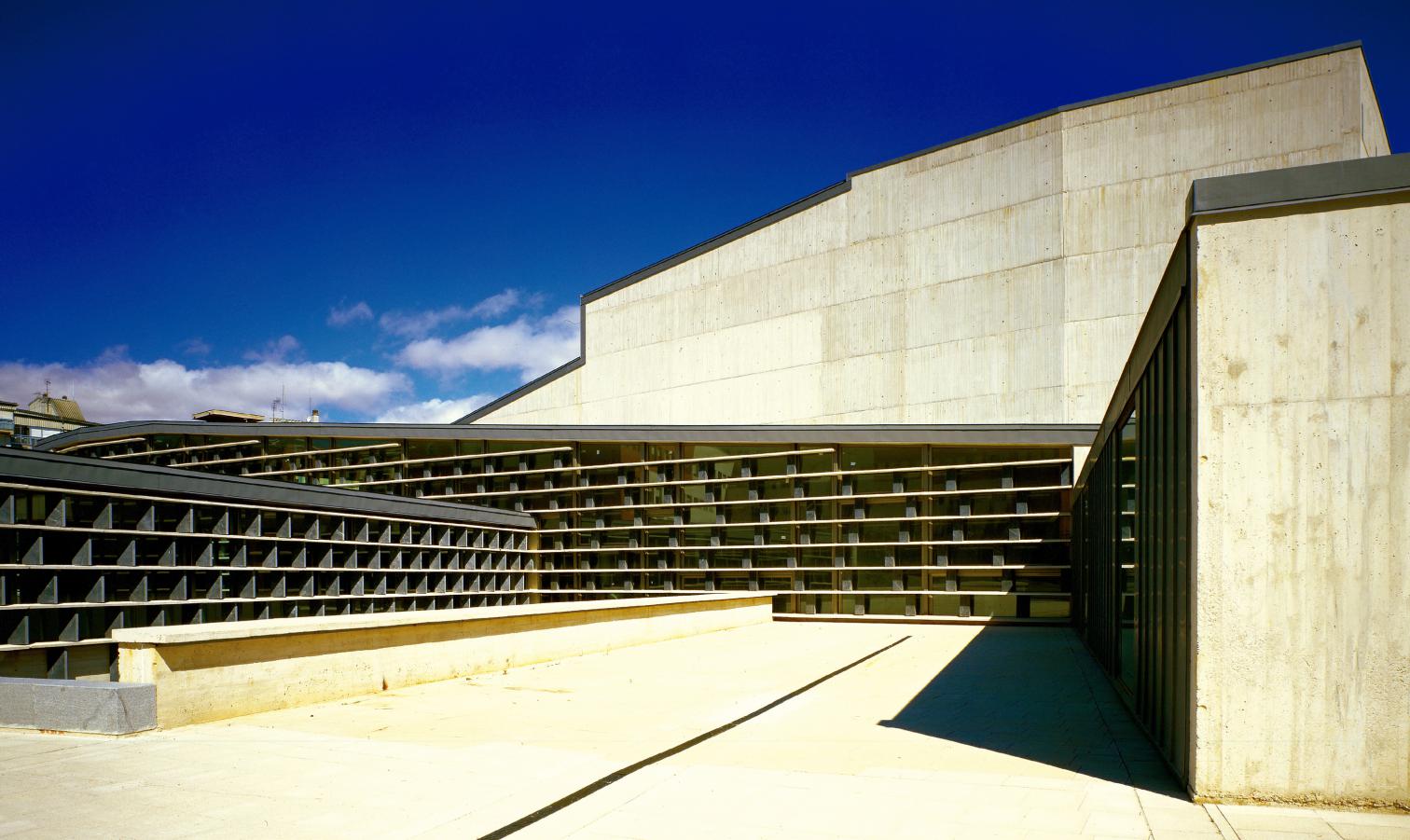 A ramp that adjusts to the topography of the plot leads to the building’s main entrance. From the center of the complex and above the roofs of the auxiliary pieces rises the volume that houses the principal auditorium. 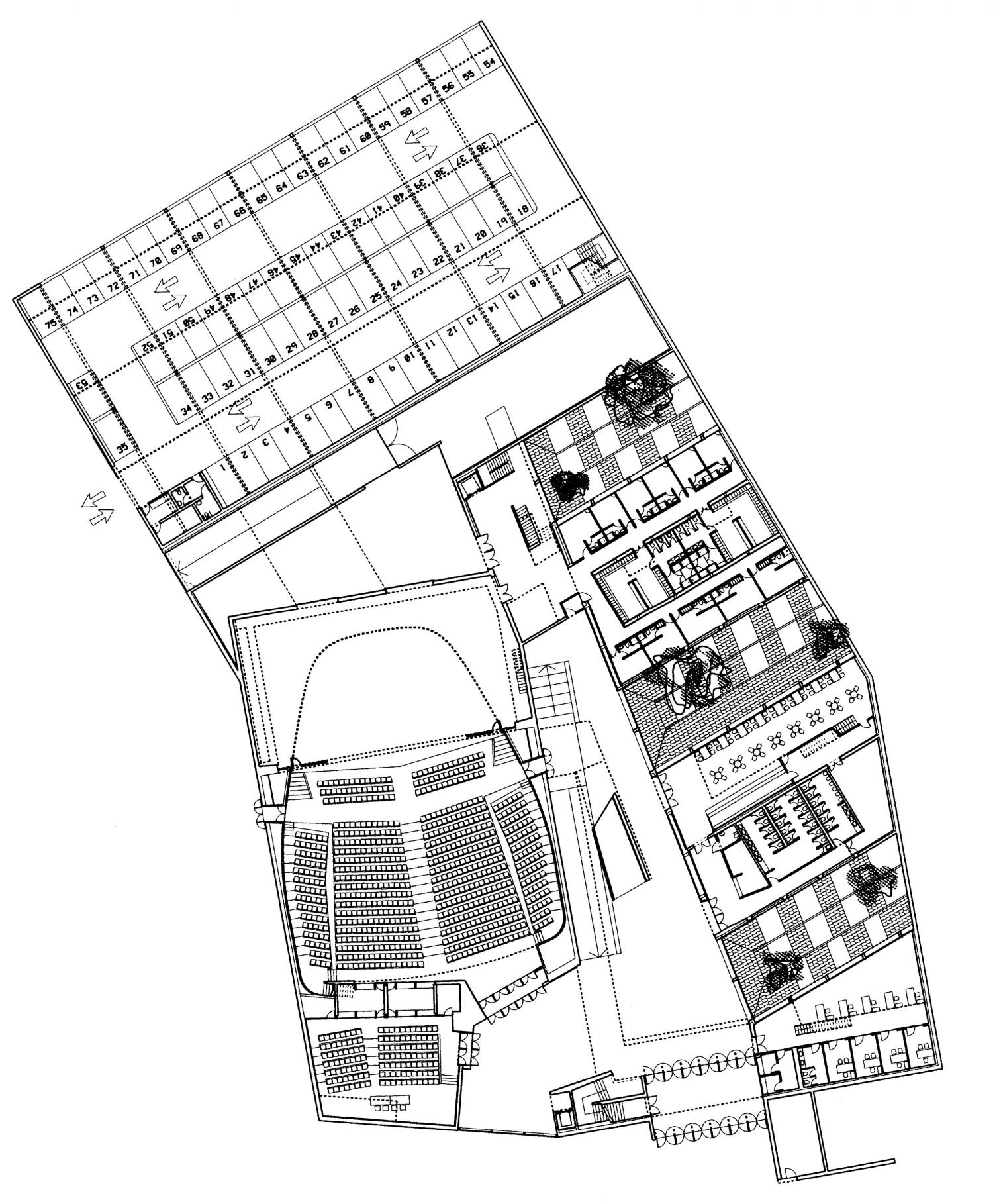 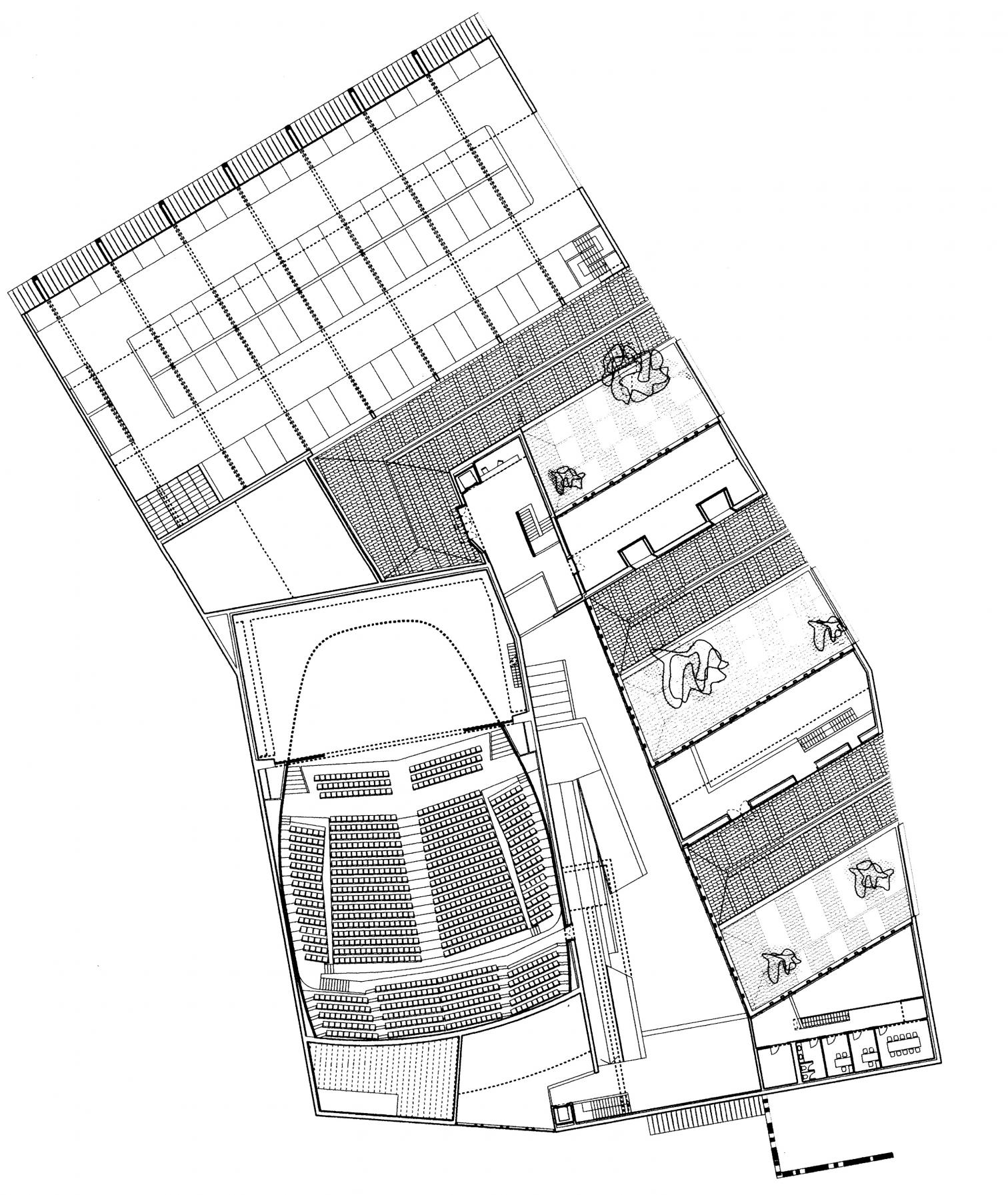 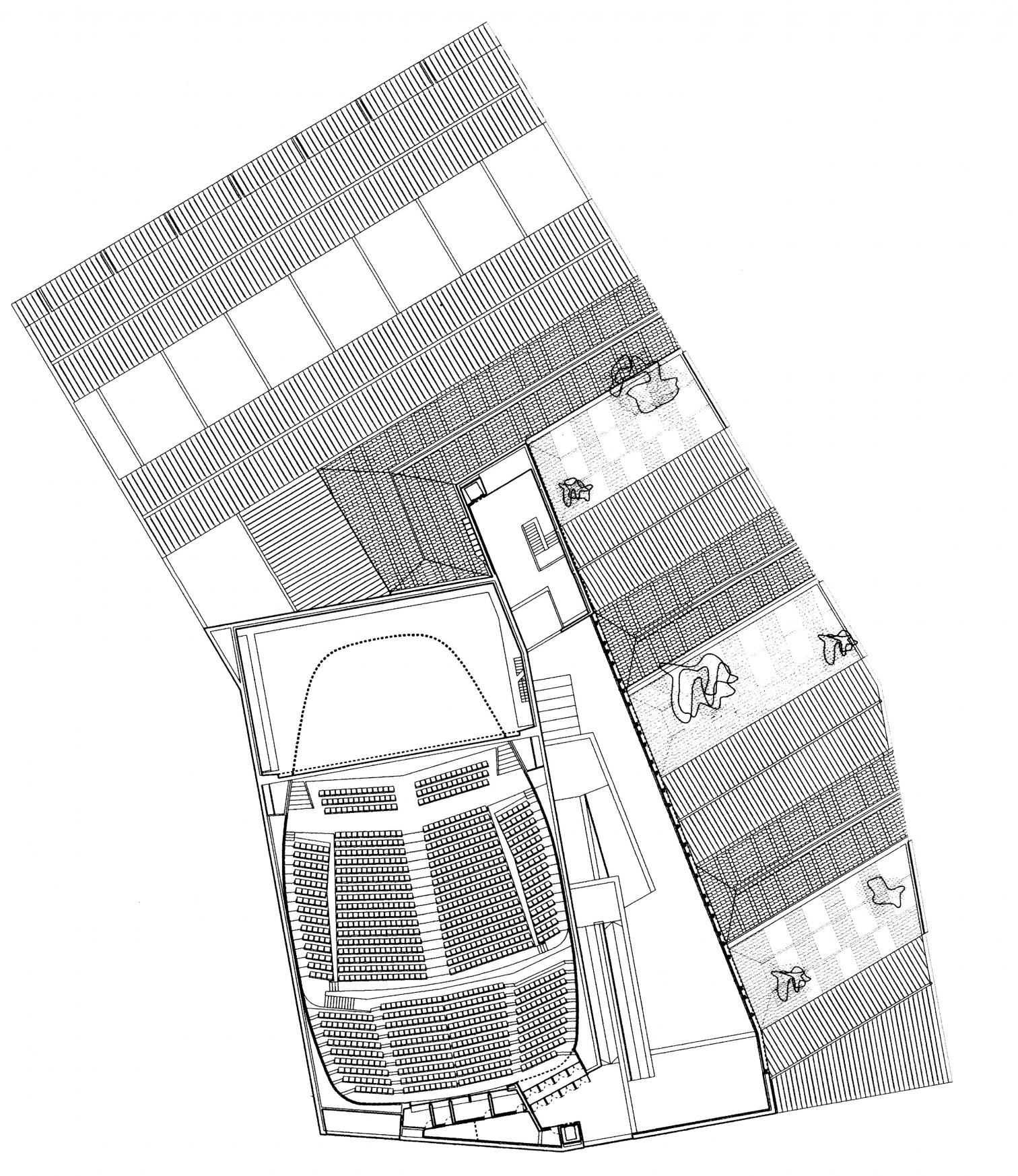 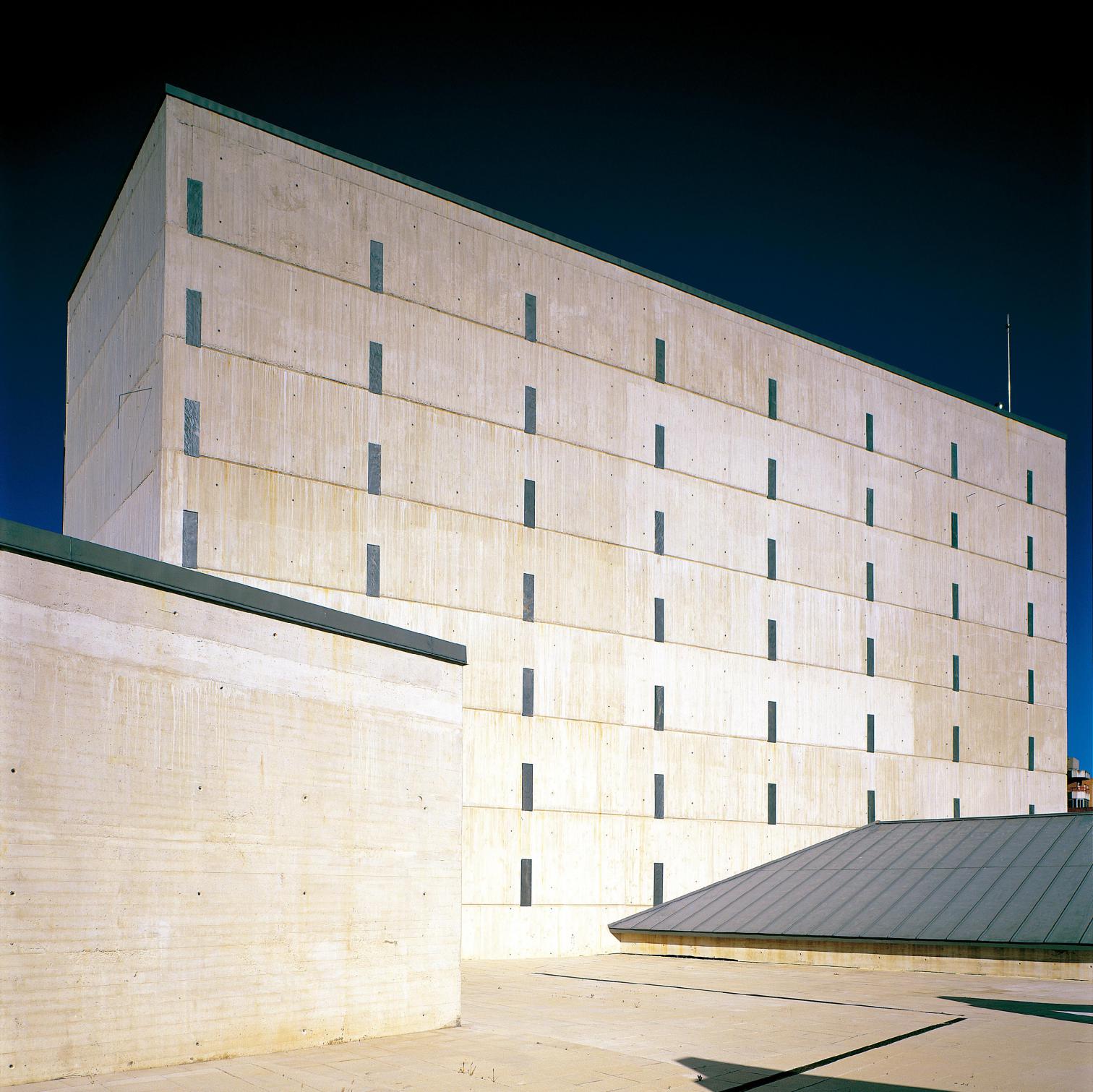 The tower that houses the stage is concealed behind a 40 cm thick concrete enclosure, with a pattern towards the exterior that here, and on the main facade, is embedded with rectangular pieces of slate adhered with resin.

With a capacity for 1,086 people, the main auditorium, entirely clad in wood, can hold theater performances and concerts: its acoustic shell, a structure with several sections that can be taken apart , bears in mind both configurations; and the seats are arranged in a sequence of staggered bands, echoed by the slits of artificial light that pierce the soft curve of the ceiling. The smaller concert hall can hold an audience of 140 people and its acoustic conditions have been specifically designed for chamber music, this hall is accommodated below the larger one, so that they can share projection and translation booths, reducing these installations to a minimum. 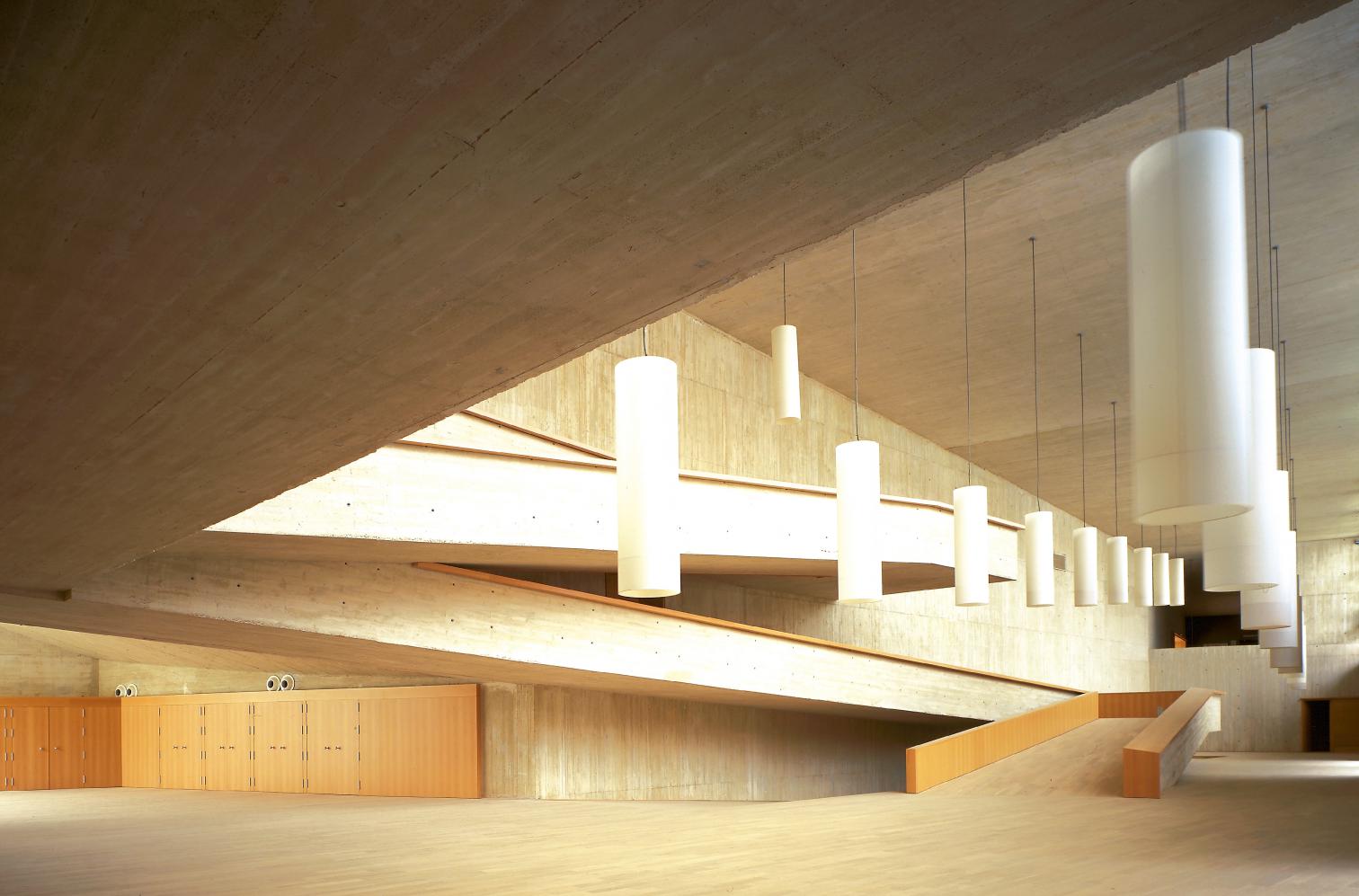 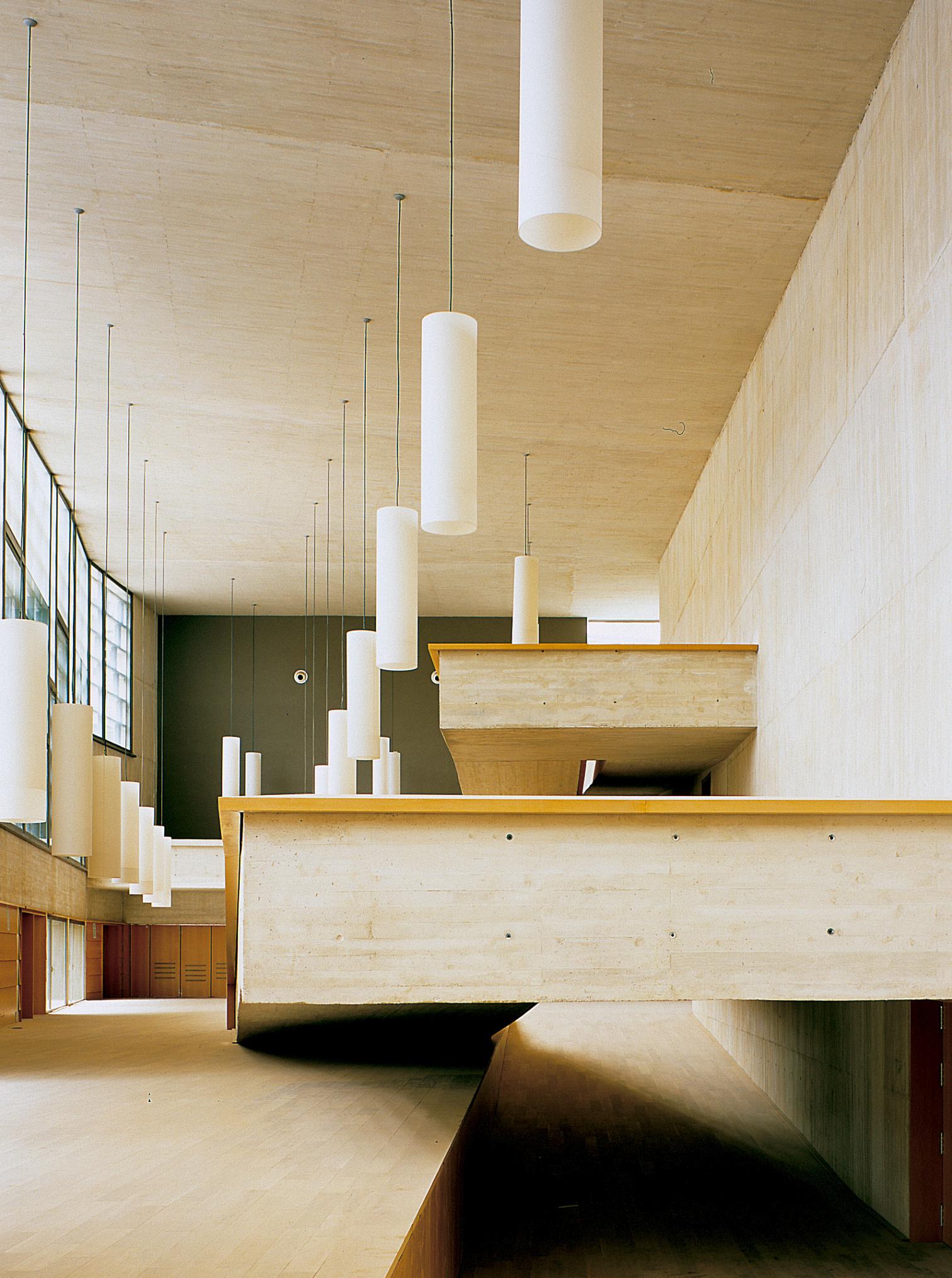 The side piece with the lobby has a sculptural ramp that gives access to the main auditorium at different levels. The rows of lights and the wood cladding are a warm counterpoint to the concrete’s roughness. 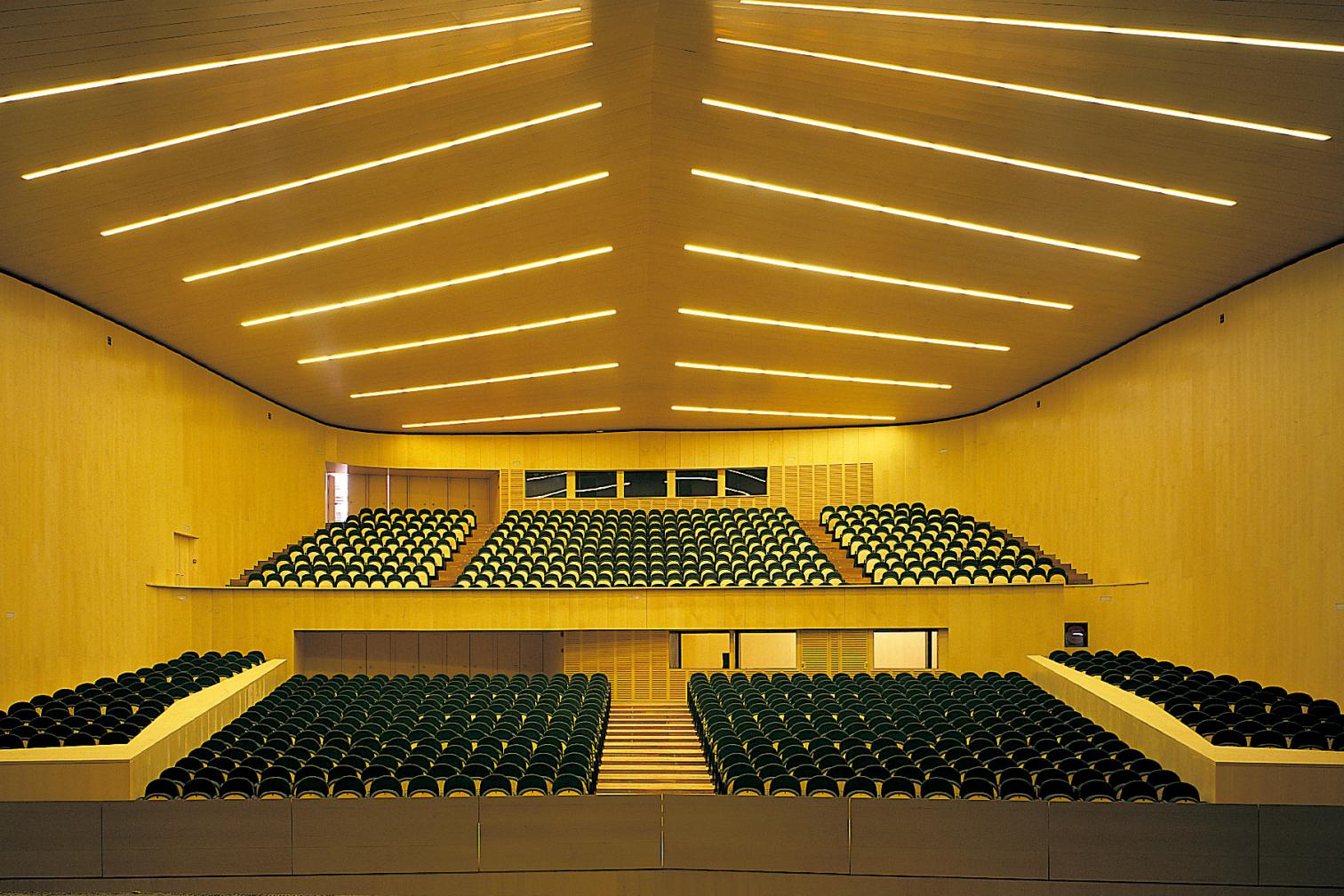 A latticework of concrete slats and pieces of slate filters the entrance of light from the lobby and separates it from the band of comb-shaped auxiliary rooms with landscaped courtyards. 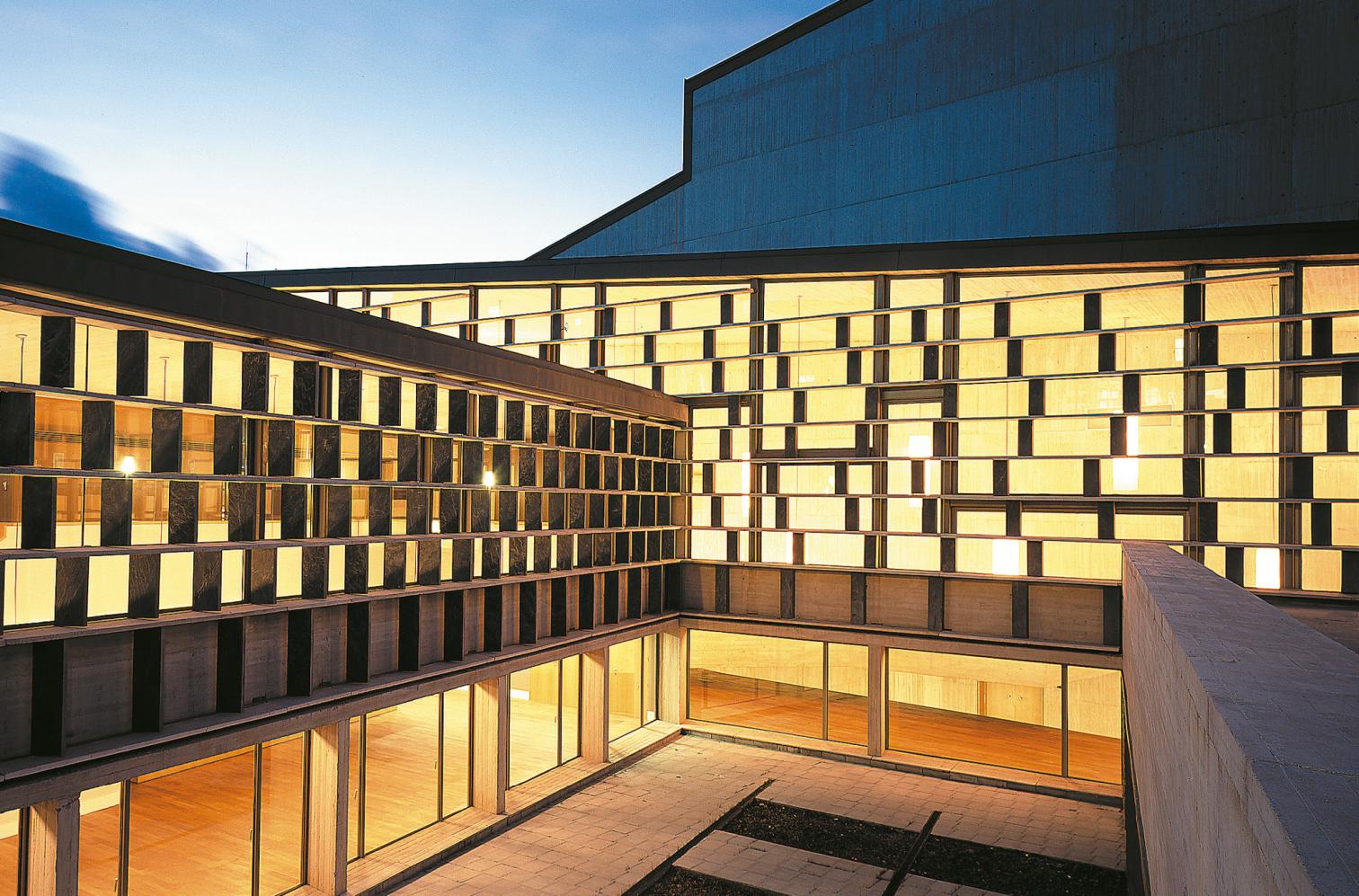 Luis Rojo de Castro Rojo Fernández-Shaw   Spain   With capacity for two thousand spectators, the new sports center of Alcázar de San Juan aims to become a facility able to operate on a both local and regional level. The project seeks balance between the orthogonal building system, which admits prefa

Barozzi Veiga   Spain   This new building, which goes up in is very close to Andalusia, is one of the last fruits of the decade of prosperity that Spain experienced prior to the financial crisis. It rests on the ground as if it were a white meteorite, landed right on one of

Spain   The project addresses the peculiarities of both site and program. Regarding the site, it  goes up on the edge of the established city and the future expansion areas. The transition from one type of fabric to another is articulated by a strip of

Nieto Sobejano   Spain   With a dense program that includes an auditorium for music, theater, opera and an exhibition hall, the new congress center of Mérida has, above all, a strong symbolic load. Located on the banks of the Guadiana river, between the bridges of Ferrocarri