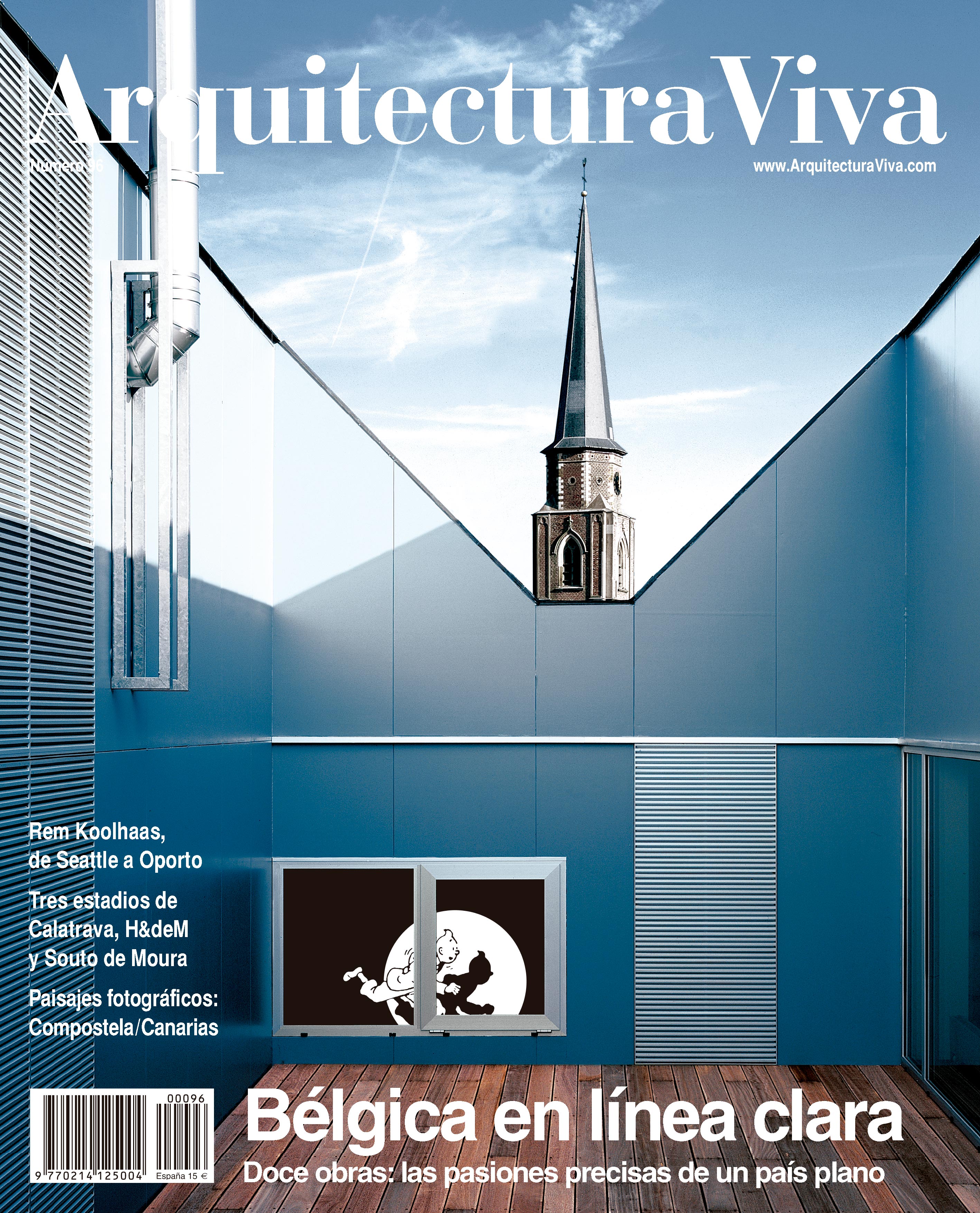 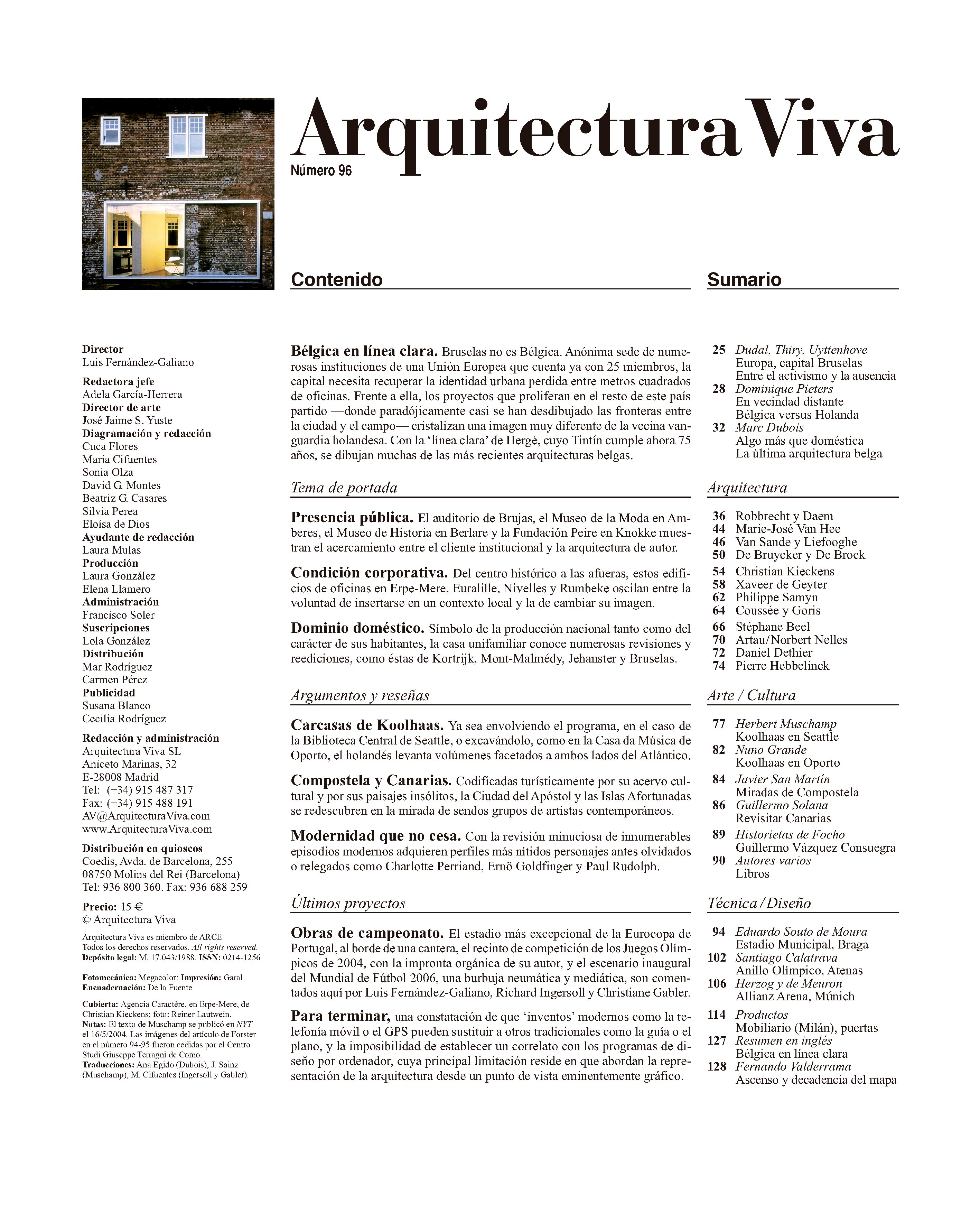 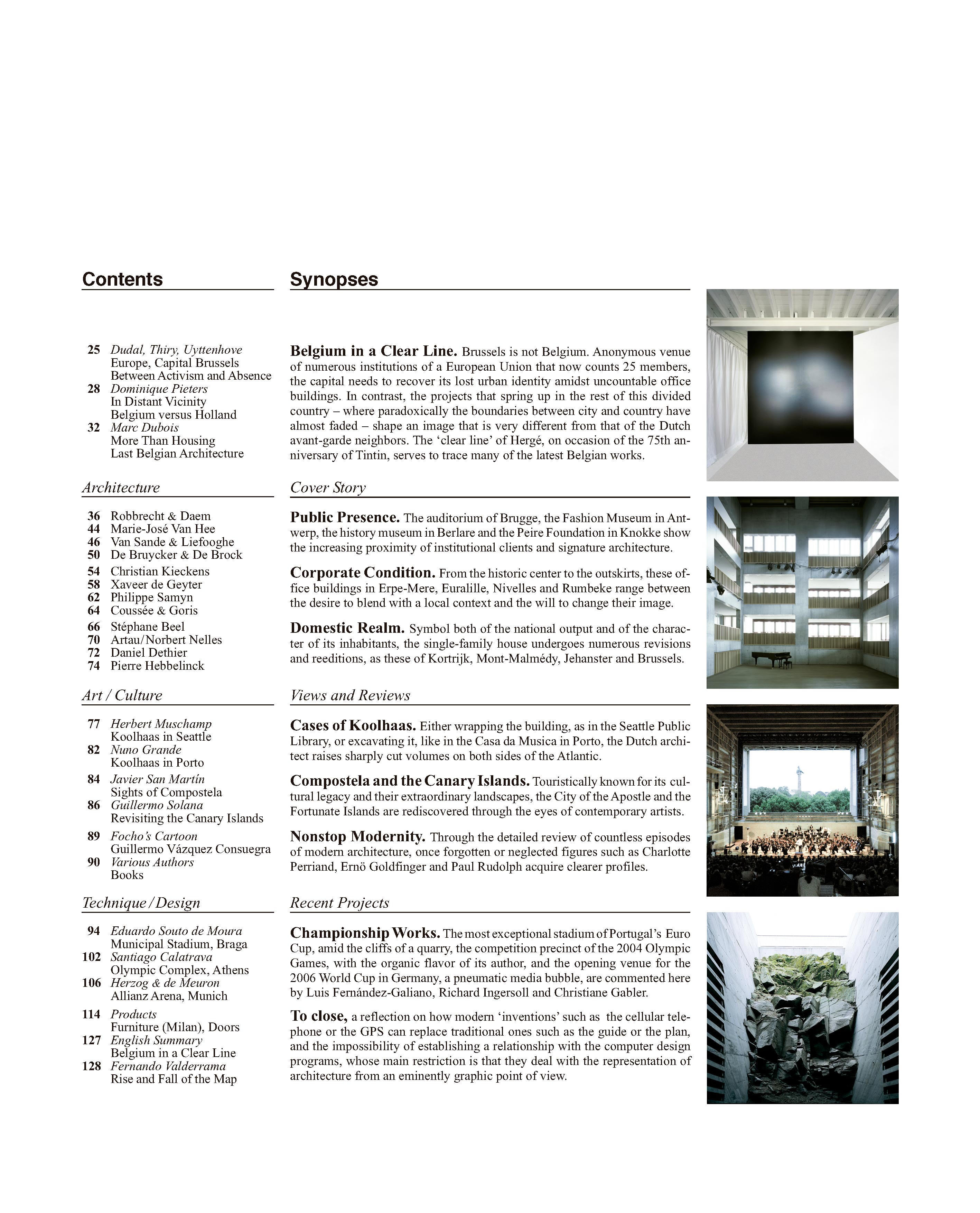 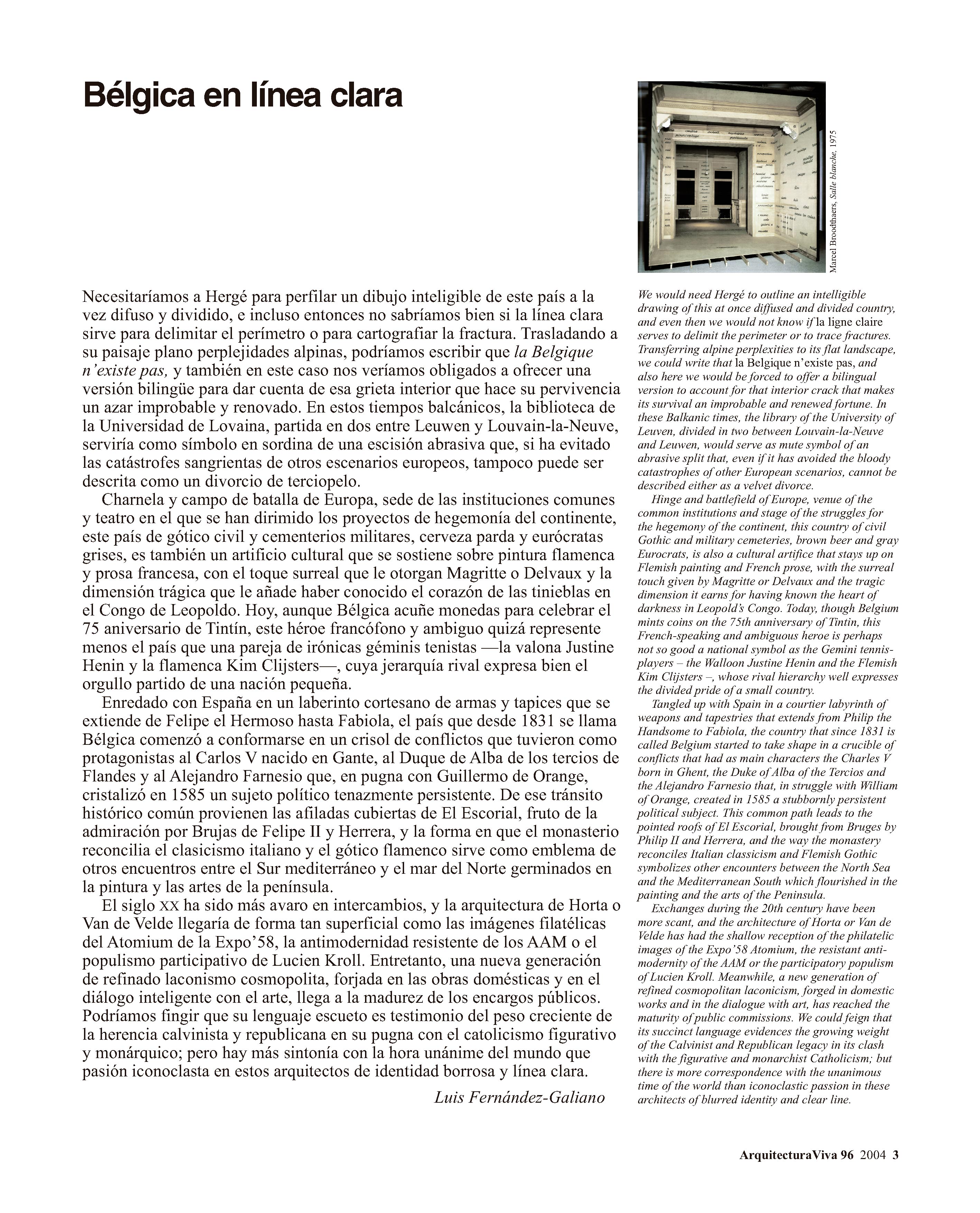 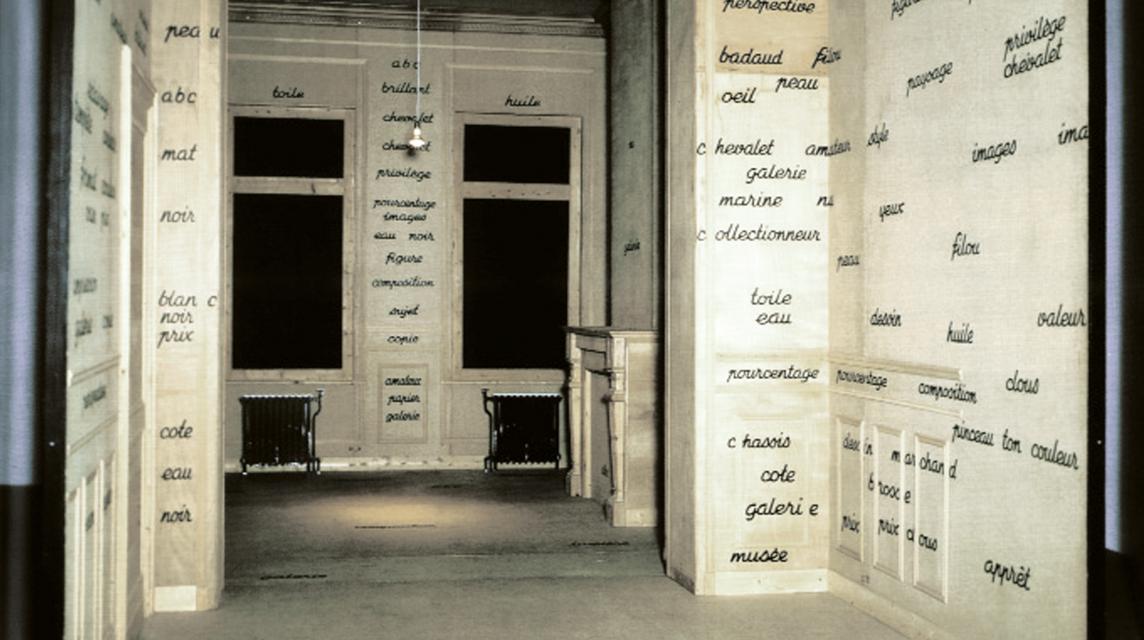 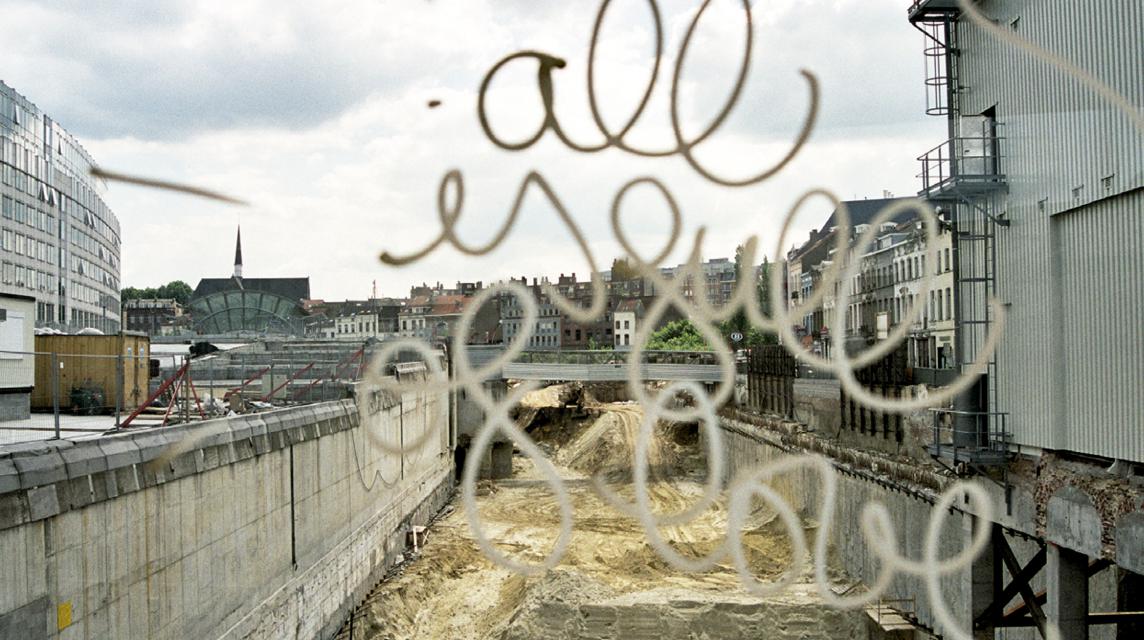 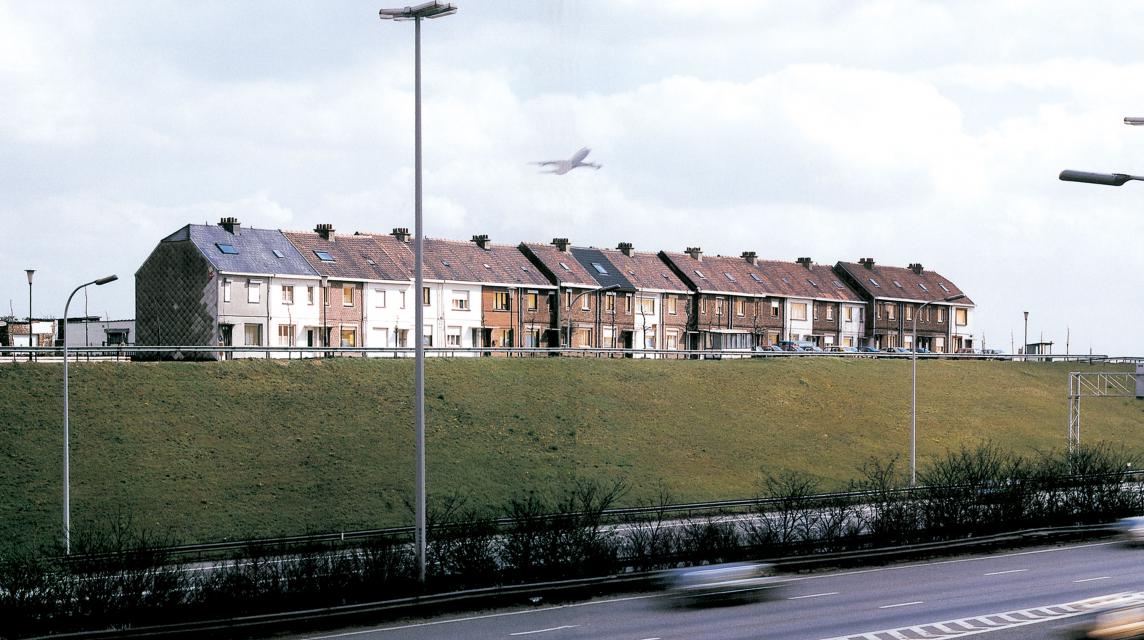 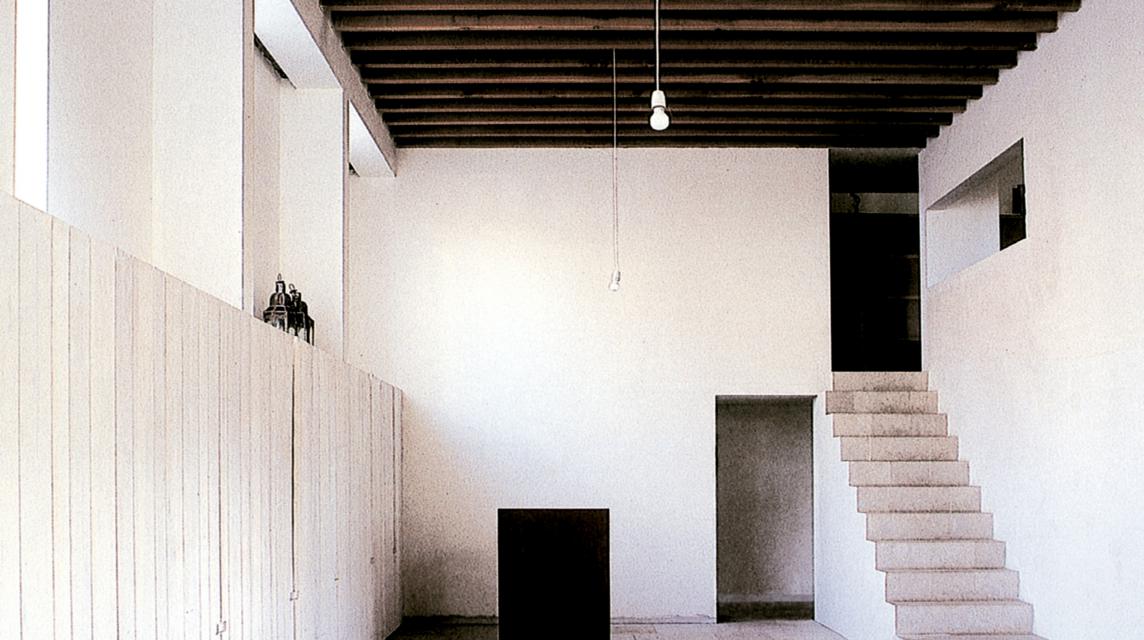 Marc Dubois   For a long time, Belgium has been a blank spot on Europe’s architecture map. This region amid France and the Netherlands has produced few noteworthy projects, especially in the area of public construction. However, in Belgium – from Victor Horta to d 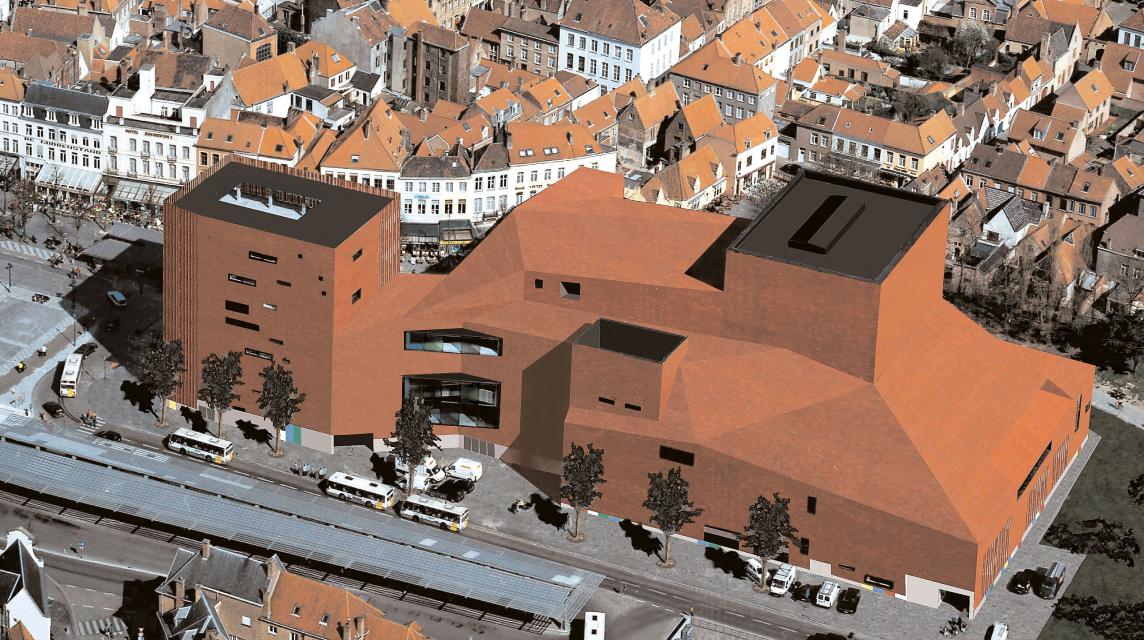 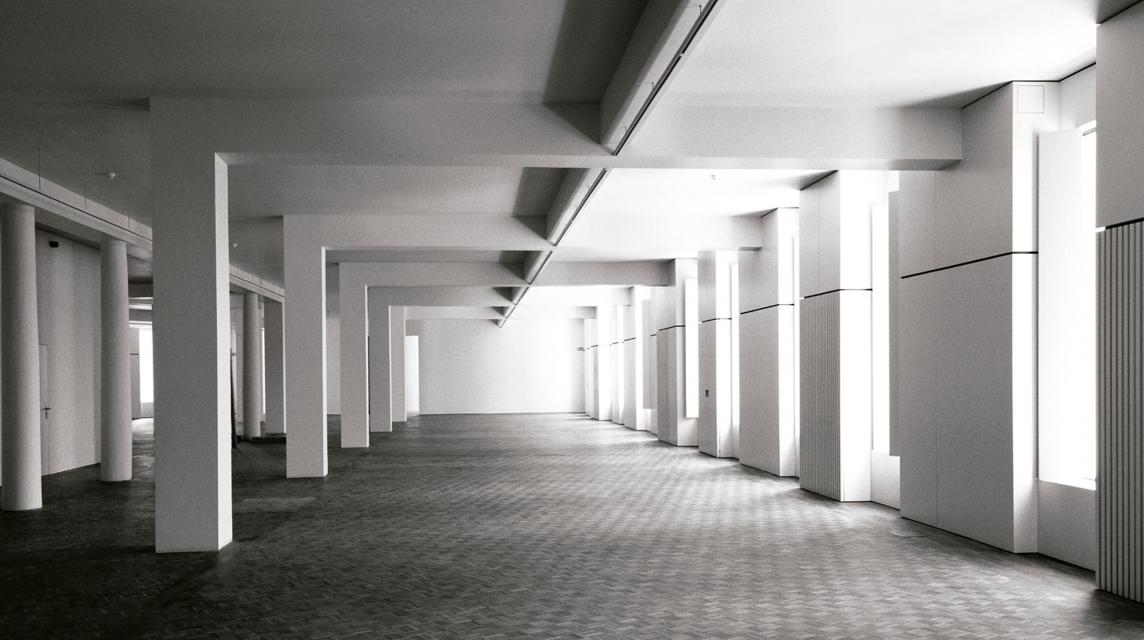 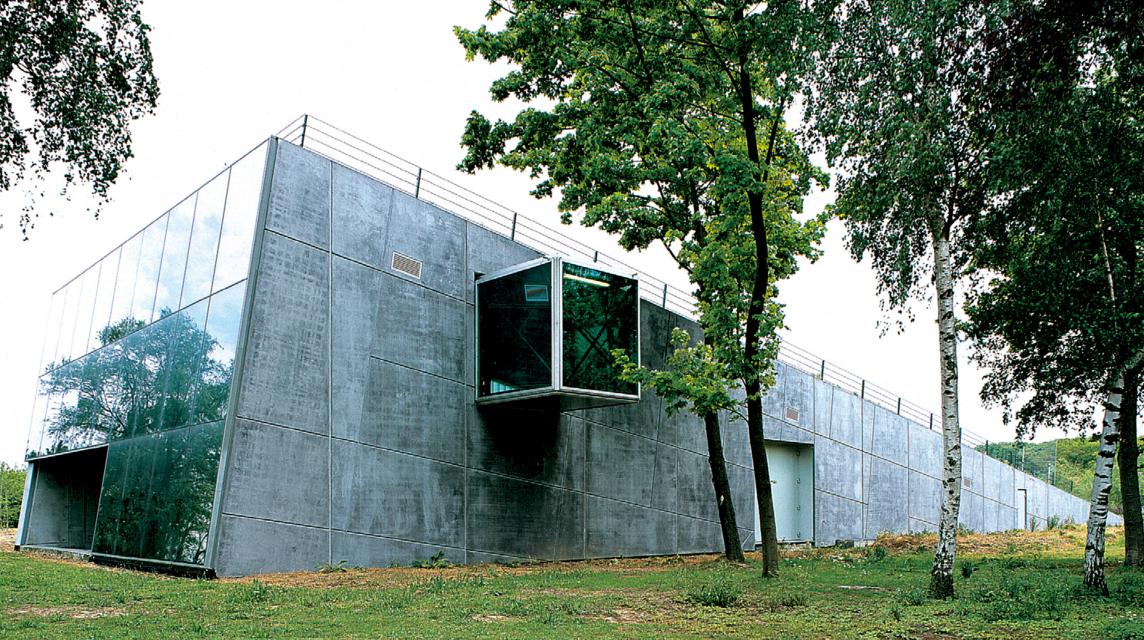 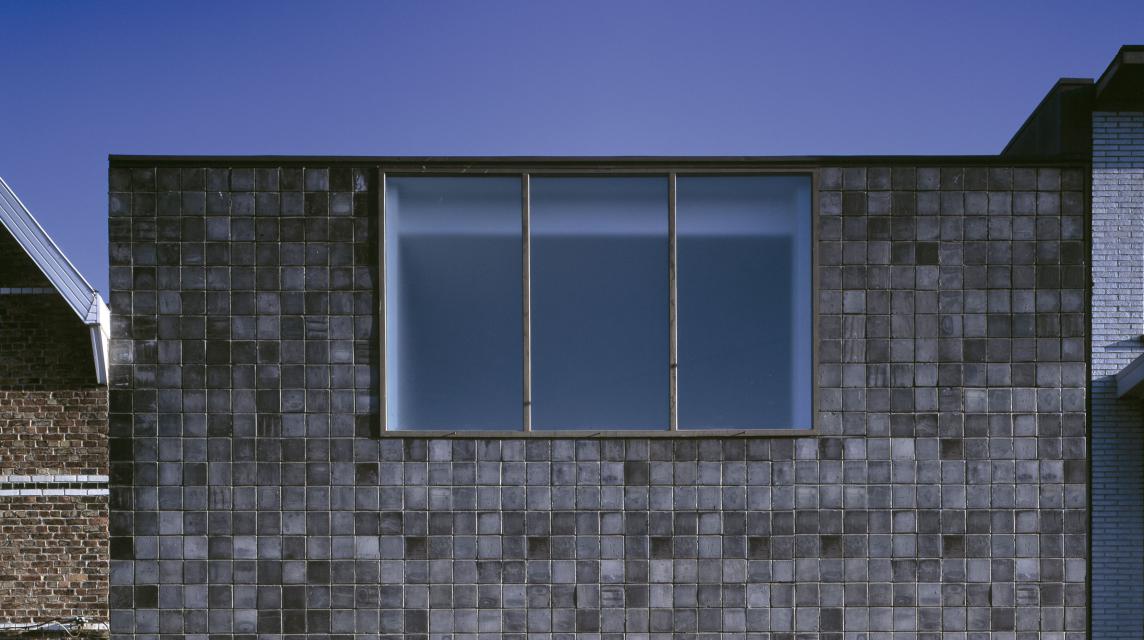 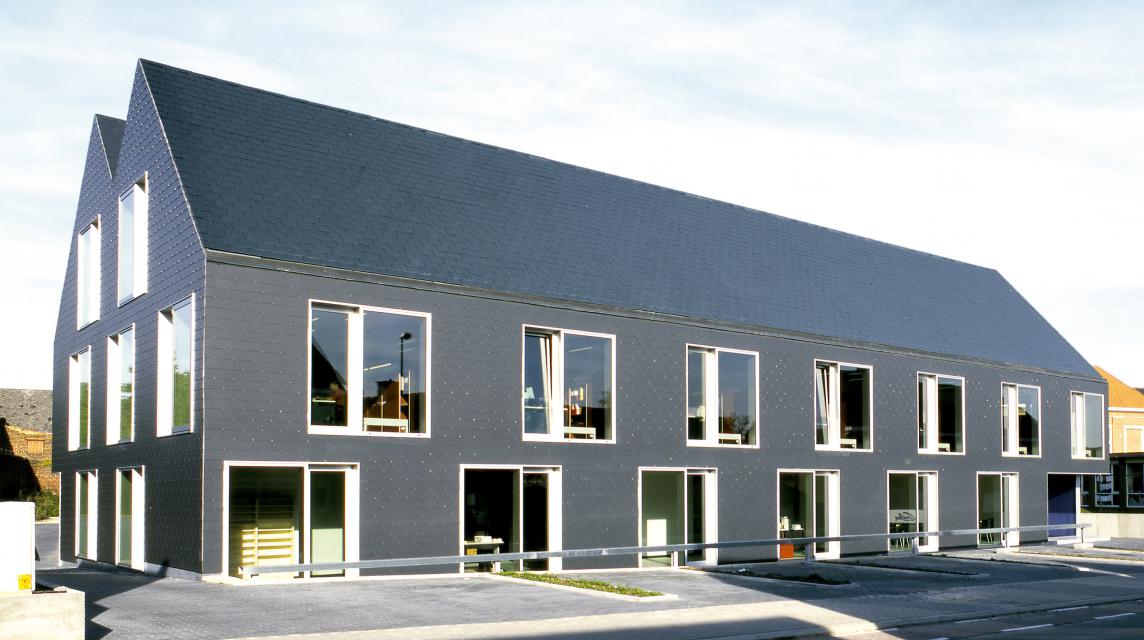 Headquarters of the Caractère Agency, Erpe-Mere 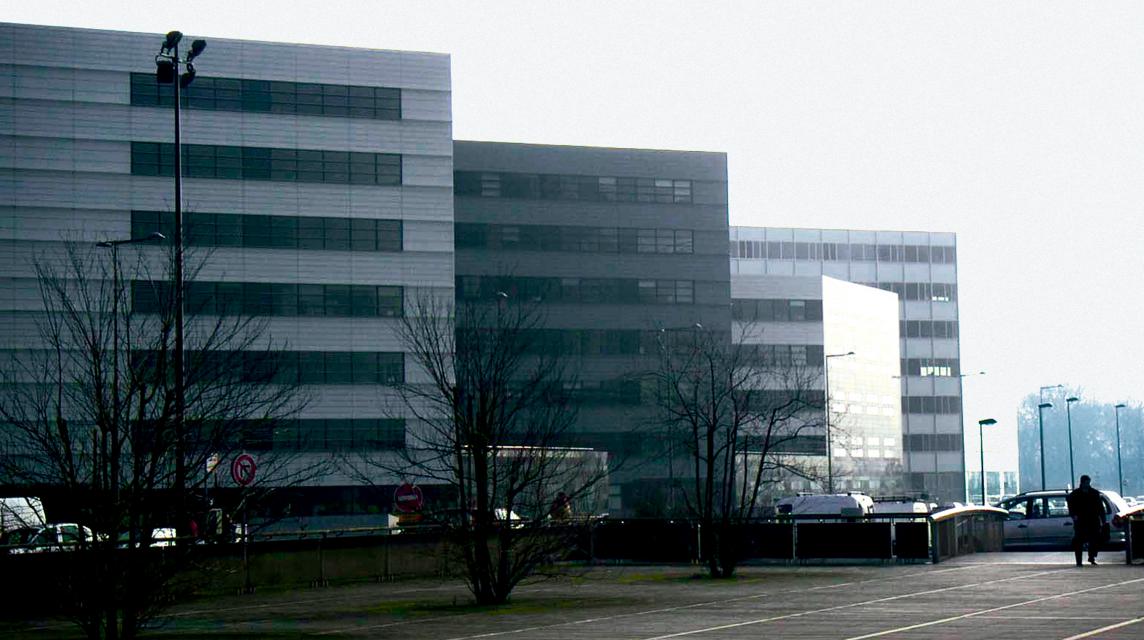 Renovation of the Frankfort House, Brussels

Luis Fernández-Galiano   In Europe, ballots have lost to football. The European Parliament elections coinciding with the start of the 2004 Eurocup in Portugal has shown, at least as far as television audiences are concerned, how politics cannot compete with sports. Surely th

Belgium in a Clear Line. Brussels is not Belgium. Anonymous venue of numerous institutions of a European Union that now counts 25 members, the capital needs to recover its lost urban identity amidst uncountable office buildings. In contrast, the projects that spring up in the rest of this divided country – where paradoxically the boundaries between city and country have almost faded – shape an image that is very different from that of the Dutch avant-garde neighbors. The ‘clear line’ of Hergé, on occasion of the 75th anniversary of Tintin; serves to trace many of the latest Belgian works.

Public Presence. The auditorium of Brugge, the Fashion Museum in Antwerp, the history museum in Berlare and the Peire Foundation in Knokke show the increasing proximity of institutional clients and signature architecture.

Corporate Condition. From the historic center to the outskirts, these office buildings in Erpe-Mere, Euralille, Nivelles and Rumbeke range between the desire to blend with a local context and the will to change their image. Christian Kieckens
Xaveer de Geyter
Philippe Samyn
Coussée y GorisDomestic Realm. Symbol both of the national output and of the character of its inhabitants, the single-family house undergoes numerous revisions and reeditions, as these of Kortrijk, Mont-Malmédy, Jehanster and Brussels. Stéphane Beel
Artau/Norbert Nelles
Danile Dethier
Pierre HebbelinckViews and Reviews

Cases of Koolhaas. Either wrapping the building, as in the Seattle Public Library, or excavating it, like in the Casa da Musica in Porto, the Dutch architect raises sharply cut volumes on both sides of the Atlantic.

Compostela and the Canary Islands. Touristically known for its cultural legacy and their extraordinary landscapes, the City of the Apostle and the Fortunate Islands are rediscovered through the eyes of contemporary artists.Javier San Martín
Sights of Compostela
Guillermo Solana
Revisting the Canary IslandsNonstop Modernity. Through the detailed review of countless episodes of modern architecture, once forgotten or neglected figures such as Charlotte Perriand, Ernö Goldfinger and Paul Rudolph acquire clearer profiles.Focho’s Cartoon
Guillermo Vázquez Consuegra
Various Authors
BooksRecent Projects

Championship Works. The most exceptional stadium of Portugal’s Euro Cup, amid the cliffs of a quarry, the competition precinct of the 2004 Olympic Games, with the organic flavor of its author, and the opening venue for the 2006 World Cup in Germany, a pneumatic media bubble, are commented here by Luis Fernández-Galiano, Richard Ingerstoll and Christiane Gabler.

To close, a reflection on how modern ‘inventions’ such as the cellular telephone or the GPS can replace traditional ones such as the guide or the plan, and the impossibility of establishing a relationship with the computer design programs, whose main restriction is that they deal with the representation of architecture from an eminently graphic point of view.Products
Furniture (Milan), Doors
English Summary
Belgium in a Clear Line
Fernando Valderrama
Rise and Fall of the Map
Luis Fernández-Galiano

We would need Hergé to outline an intelligible drawing of this at once diffused and divided country, and even then we would not know if la ligne claire serves to delimit the perimeter or to trace fractures. Transferring alpine perplexities to its flat landscape, we could write that la Belgique n’ existe pas, and also here we would be forced to offer a bilingual version to account for that interior crack that makes its survival an improbable and renewed fortune. In these Balkanic times, the library of the University of Leuven, divided in two between Louvain-la-Neuve and Leuwen, would serve as mute symbol of an abrasive split that, even if it has avoided the bloody catastrophes of other European scenarios, cannot be described either as a velvet divorce.

Hinge and battlefield of Europe, venue of the common institutions and stage of the struggles for the hegemony of the continent, this country of civil Gothic and military cemeteries, brown beer and gray Eurocrats, is also a cultural artifice that stays up on Flemish painting and French prose, with the surreal touch given by Magritte or Delvaux and the tragic dimension it earns for having known the heart of darkness in Leopold’s Congo. Today, though Belgium mints coins on the 75th anniversary of Tintin, this French-speaking and ambiguous heroe is perhaps not so good a national symbol as the Gemini tennis-players – the Walloon Justine Henin and the Flemish Kim Clijsters –, whose rival hierarchy well expresses the divided pride of a small country.

Tangled up with Spain in a courtier labyrinth of weapons and tapestries that extends from Philip the Handsome to Fabiola, the country that since 1831 is called Belgium started to take shape in a crucible of conflicts that had as main characters the Charles V born in Ghent, the Duke of Alba of the Tercios and the Alejandro Farnesio that, in struggle with William of Orange, created in 1585 a stubbornly persistent political subject. This common path leads to the pointed roofs of El Escorial, brought from Bruges by Philip II and Herrera, and the way the monastery reconciles Italian classicism and Flemish Gothic symbolizes other encounters between the North Sea and the Mediterranean South which flourished in the painting and the arts of the Peninsula.

Exchanges during the 20th century have been more scant, and the architecture of Horta or Van de Velde has had the shallow reception of the philatelic images of the Expo’58 Atomium, the resistant anti-modernity of the AAM or the participatory populism of Lucien Kroll. Meanwhile, a new generation of refined cosmopolitan laconicism, forged in domestic works and in the dialogue with art, has reached the maturity of public commissions. We could feign that its succinct language evidences the growing weight of the Calvinist and Republican legacy in its clash with the figurative and monarchist Catholicism; but there is more correspondence with the unanimous time of the world than iconoclastic passion in these architects of blurred identity and clear line.