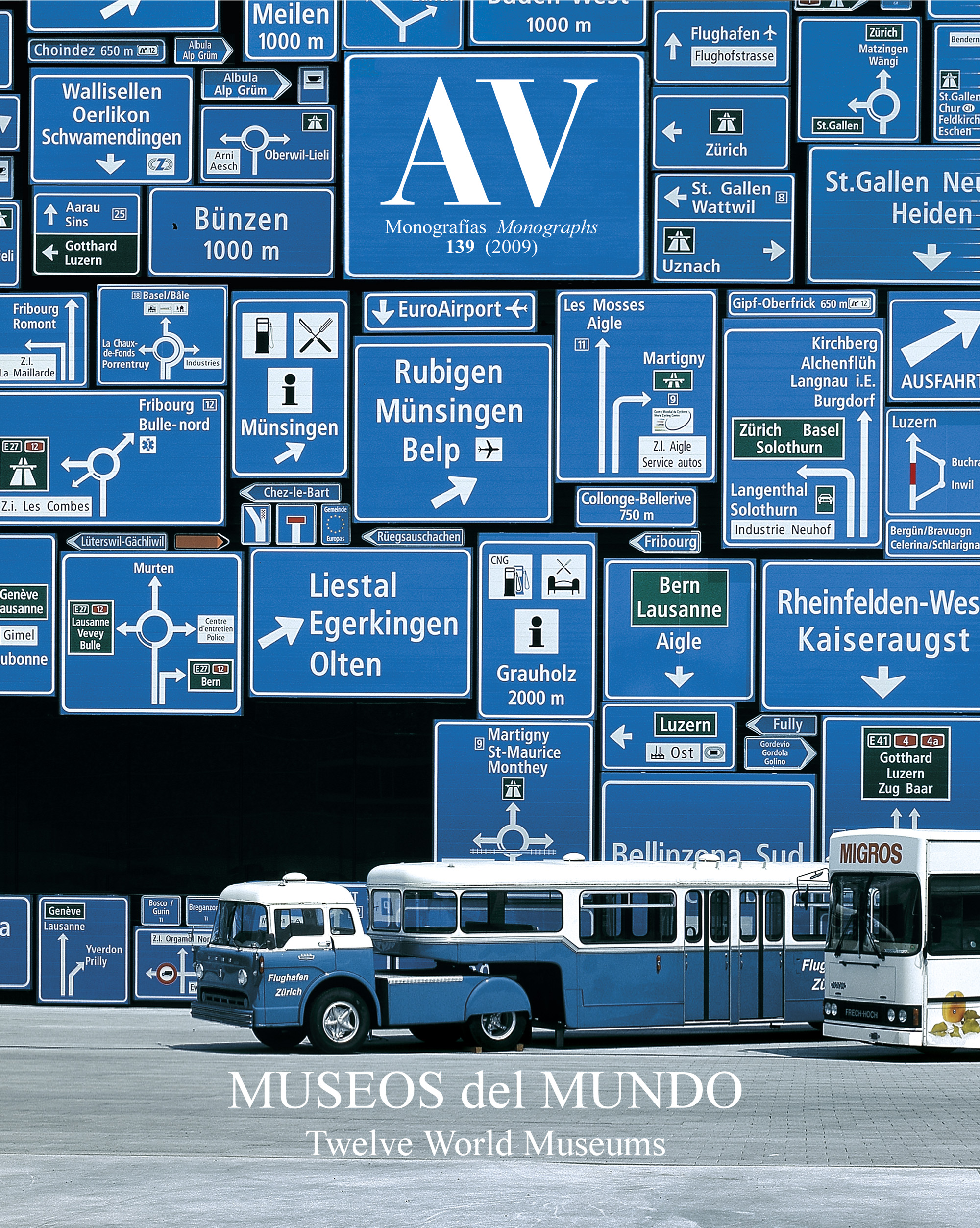 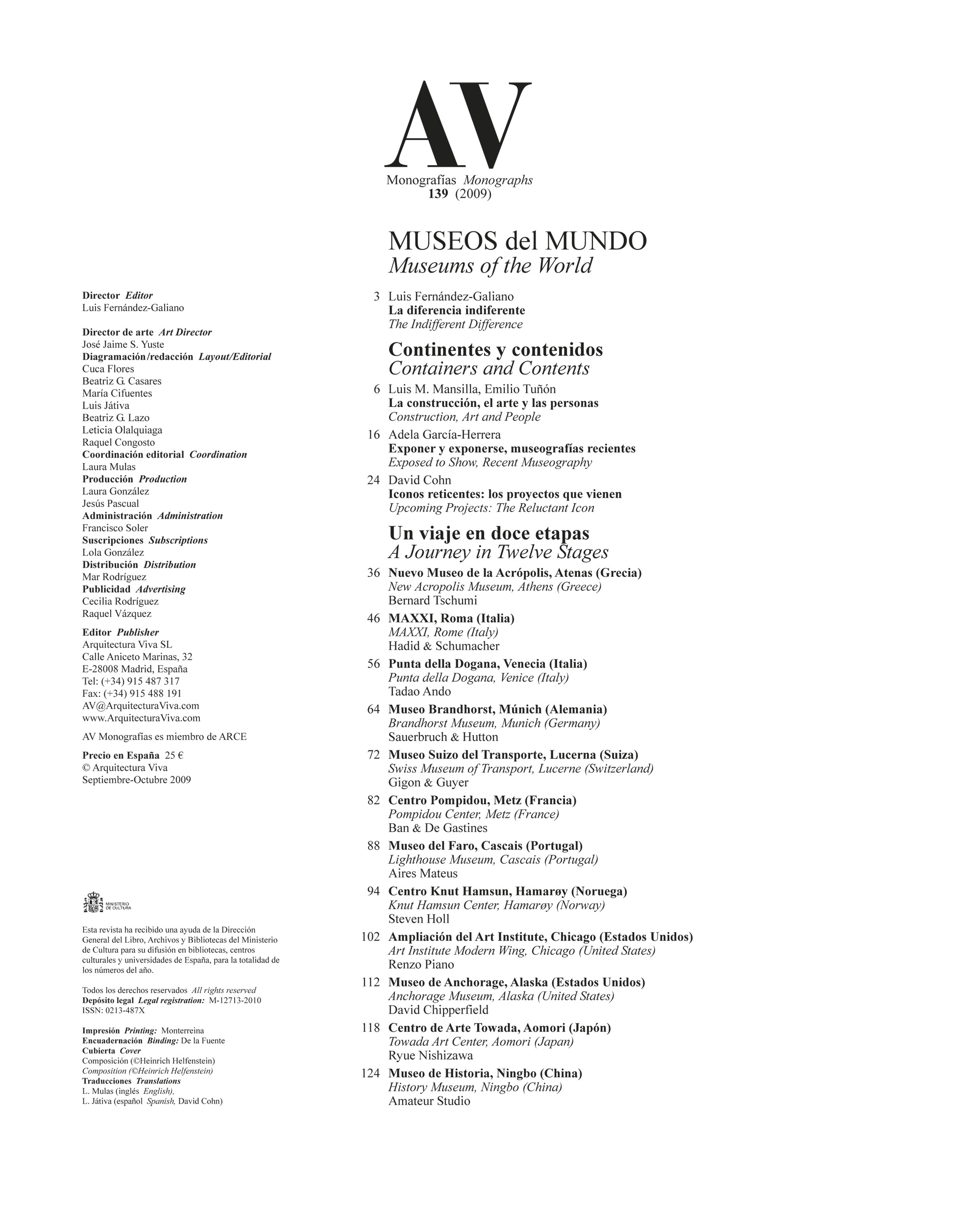 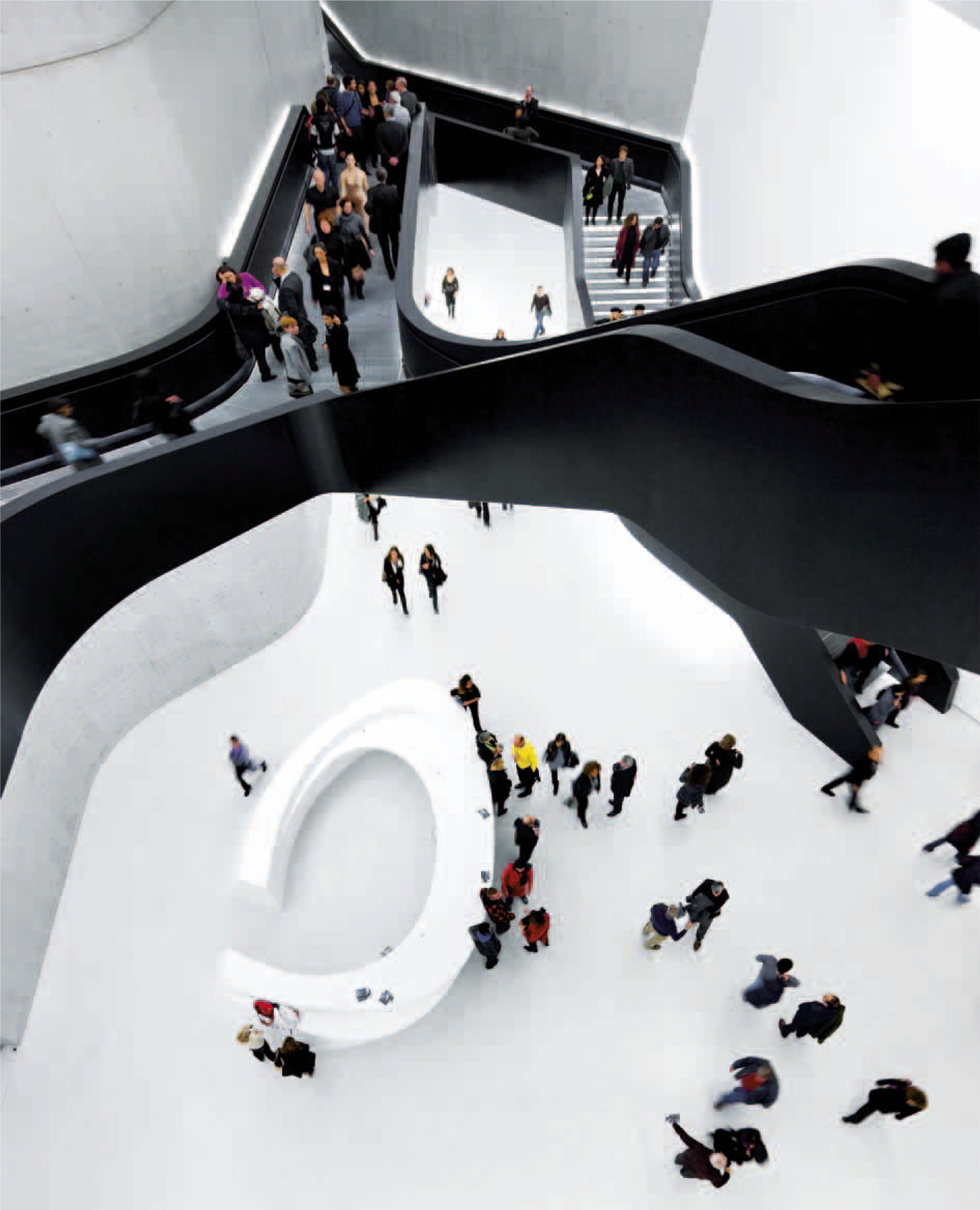 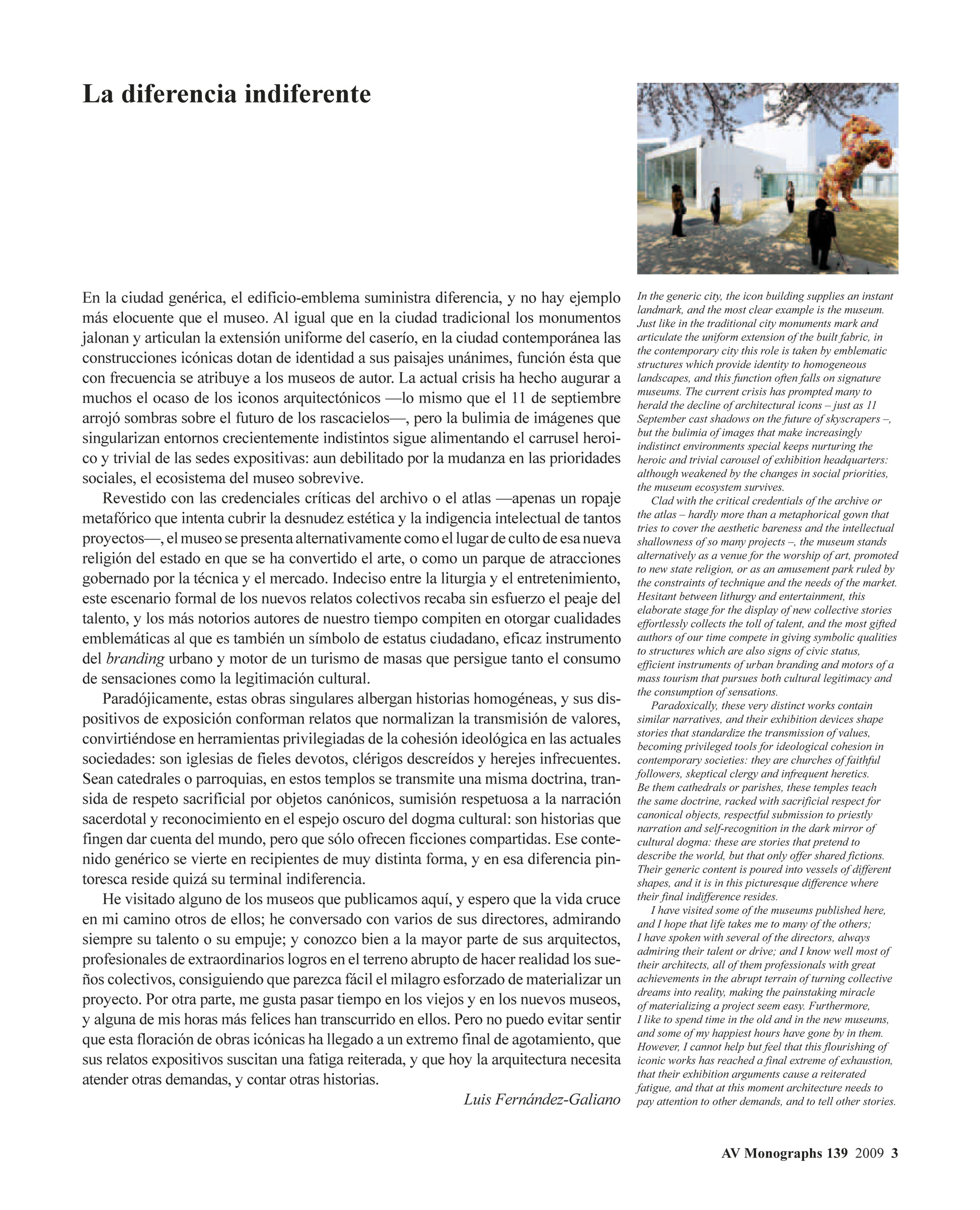 Luis Moreno Mansilla, Emilio Tuñón   We look back and are perhaps able to untangle the facts and the ideas, to rebuild itineraries, to sense the complexity of things, and certainly, to observe how interests sail in a particular current, in a certain direction. And we see that ideas and

Adela García-Herrera   Three out of four of the most important new museum projects under way in Spain do not have their own collection. In terms of budget, aims and expectations, these projects have an uncontested value for the public administrations that promote them, but

A Journey in Twelve Stages

Bernard Tschumi   Greece   This project was the winning proposal in an international competition held in the year 2001. The new building is located in a strategic area of the city, only 300 hundred meters from the Athens Acropolis, in the historic district of Makryianni. Its l

MAXXI, Museum of the Arts of the 21st Century

Patrik Schumacher, Zaha Hadid Architects   Italy   In 1998 the Special Superintendency for Contemporary Art, by appointment of the Ministry of Cultural Heritage, convened an international competition for the design of the first National?Arts Center of Italy, devoted to the exhibition and preservation

Tadao Ando   Italy   Surrounded by important historical buildings, among which the nearby Basilica of Santa Maria della Salute, the old customs building was raised in the 17th century by the architect Giuseppe Benoni at the entrance of the Grand Canal of Venice, on a tri

Sauerbruch Hutton   Germany   Located in the Munich district of Maxvorstadt, in the north-western corner of the Museum Quarter – which includes the Alte Pinakothek, the Neue Pinakothek, the Pinakothek der Moderne, and the Staatliche Graphische Sammlung –, the Brandhorst Museum co

Gigon Guyer Architects   Switzerland   The current project is based on the 1999 competition for the gradual renovation of a museum complex with its various buildings exhibiting the different means of transport. In the first construction phase, a new entrance building (Futurcom) was also

Shigeru Ban   France   In January 2003, the Pompidou Center and the City of Metz announced the decision, in agreement with the French Ministry for the Arts, Culture and Communications, to set up the first decentralized branch of the Centre National d’Art et de Culture Geor

Aires Mateus   Portugal   Founded in the 17th century next to the Casa de Santa María, the Santa Marta Lighthouse is part of a monumental complex on the south end of Cascais. The project emerges from the need to preserve the old fortress and the lighthouse through their adapt

Steven Holl   Norway   Knut Hamsun, Norway’s most inventive 20th-century writer, fabricated new forms of expression in his first novel Hunger. He went on to establish a truly modern school of fiction with works like Pan, Mysteries, and Growth of the Soil. This center dedi

Renzo Piano   United States   The new Modern Wing for the Art Institute of Chicago is not only the most ambitious extension undertaken by the institution, but it also turns this museum into the second largest in the United States. Consisting of two pavilions connected by a large

SANAA, Office of Ryue Nishizawa   Japan   Set out by the architect as a reflection on density, the Towada Art Center, located in a small city north of Honshu Island, is constituted by sixteen volumes that create an urban landscape that is independent but in tune with the fragmentation of the

Amateur Architecture Studio   China   The museum is a bold three-story block located on the northwestern edge of a huge empty plaza in Yinzhou, a blooming district on the outskirts of the southern Chinese city of Ningbo. The building, which takes the nearby mountains as inspiration to tr

David Chipperfield   United States   Located in the heart of Alaska’s largest city, the Anchorage Museum at Rasmuson Center began as a public-private partnership to celebrate the 100th anniversary of the purchase of Alaska from Russia. The Museum opened its doors in 1968 with an exhibit

Museums of the World

In the generic city, the icon building supplies an instant landmark, and the most clear example is the museum. Just like in the traditional city monuments mark and articulate the uniform extension of the built fabric, in the contemporary city this role is taken by emblematic structures which provide identity to homogeneous landscapes, and this function often falls on signature museums. The current crisis has prompted many to herald the decline of architectural icons – just as 11 September cast shadows on the future of skyscrapers –, but the bulimia of images that make increasingly indistinct environments special keeps nurturing the heroic and trivial carousel of exhibition headquarters:?although weakened by the changes in social priorities,
the museum ecosystem survives.

Clad with the critical credentials of the archive or the atlas – hardly more than a metaphorical gown that tries to cover the aesthetic bareness and the intellectual shallowness of so many projects –, the museum stands alternatively as a venue for the worship of art, promoted to new state religion, or as an amusement park ruled by the constraints of technique and the needs of the market. Hesitant between lithurgy and entertainment, this elaborate stage for the display of new collective stories effortlessly collects the toll of talent, and the most gifted authors of our time compete in giving symbolic qualities to structures which are also signs of civic status, efficient instruments of urban branding and motors of a mass tourism that pursues both cultural legitimacy and the consumption of sensations.

Paradoxically, these very distinct works contain similar narratives, and their exhibition devices shape stories that standardize the transmission of values, becoming privileged tools for ideological cohesion in contemporary societies:?they are churches of faithful followers, skeptical clergy and infrequent heretics. Be them cathedrals or parishes, these temples teach the same doctrine, racked with sacrificial respect for canonical objects, respectful submission to priestly narration and self-recognition in the dark mirror of cultural dogma:?these are stories that pretend to describe the world, but that only offer shared fictions. Their generic content is poured into vessels of different shapes, and it is in this picturesque difference where their final indifference resides.

I have visited some of the museums published here, and I?hope that life takes me to many of the others;? I have spoken with several of the directors, always admiring their talent or drive; and I know well most of their architects, all of them professionals with great achievements in the abrupt terrain of turning collective dreams into reality, making the painstaking miracle of materializing a project seem easy. Furthermore, I like to spend time in the old and in the new museums, and some of my happiest hours have gone by in them. However, I cannot help but feel that this flourishing of iconic works has reached a final extreme of exhaustion, that their exhibition arguments cause a reiterated fatigue, and that at this moment architecture needs to pay attention to other demands, and to tell other stories.