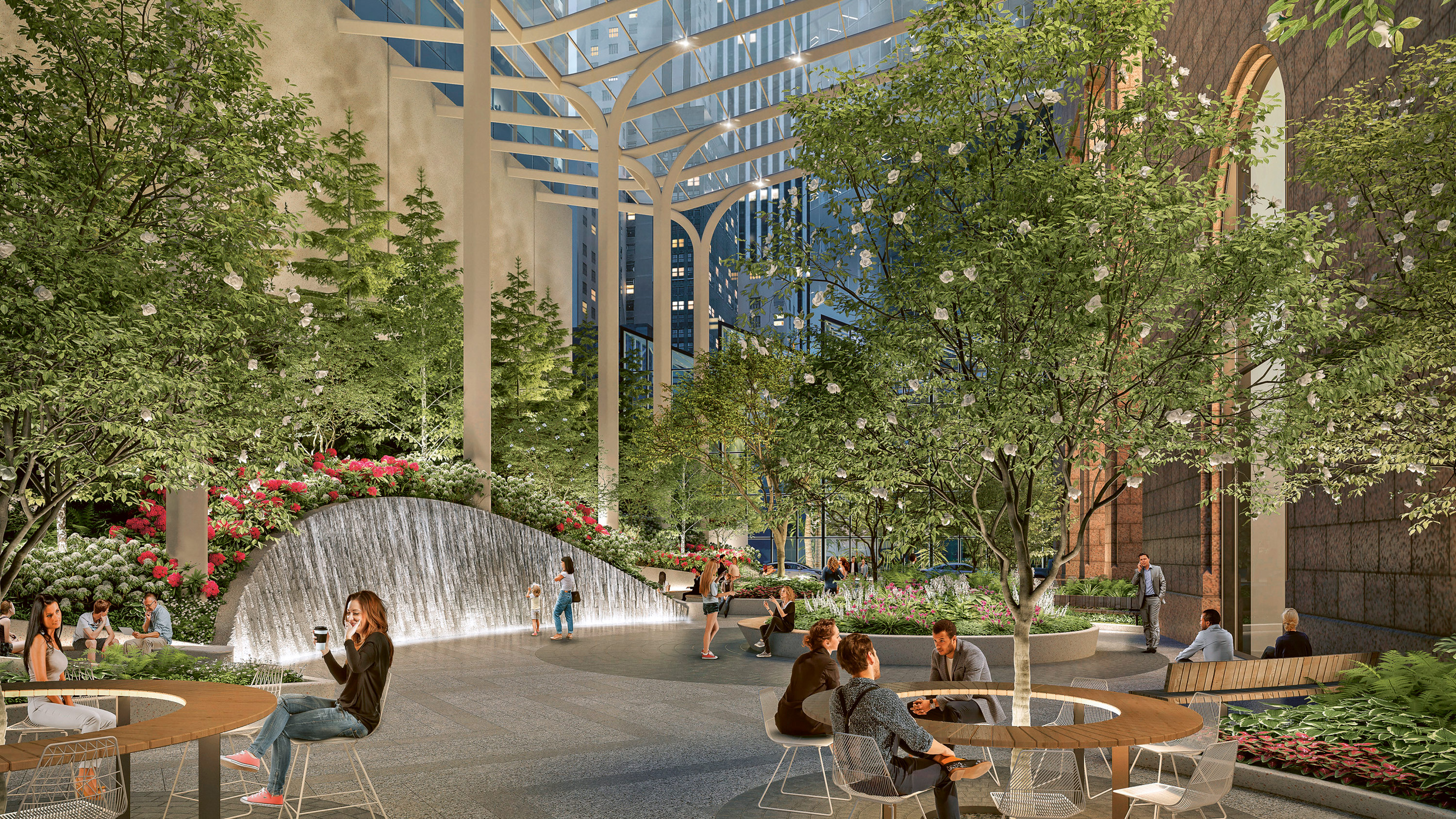 The firm Snøhetta has gotten the New York City Planning Commission’s go-ahead to create a public garden in the AT&T tower that went up in 1984 at 550 Madison Avenue in Midtown Manhattan, designed by Philip Johnson and John Burgee. The announcement marks the onset of the final phase of permissions required to renovate the 197-meter-tall office building, acquired by The Olayan Group in 2016.

The garden was part of the updated proposal that Snøhetta unveiled in 2018, drawn up after the controversy sparked by the 2017 initial design for the skyscraper’s renovation; a polemic that led to the building’s listing by New York’s Landmarks Preservation Commission, which in February 2019 approved the definitive renovation project.

The garden scheme reinvents an existing public zone on ground level. A new steel-and-glass roof is held up by slender white columns, referencing the curved glass roof that will be eliminated, as will an annexed building, to obtain 50% more space for the project.

550 Madison Garden is a privately owned public space (POPS) with evergreen trees, bushes, and a curtain of water to help block out external noise.It will be visible from inside the tower’s lobby, to be renovated by Gensler.

The garden includes a series of circular forms evoking the motifs of Johnson’s design, such as the large round window defining the main entrance and the arches of the foyer.

The renovation of the interiors is now ongoing and 50% done, the aim being completion in 2020. Cabins by the Jostedalsbreen glacier, Veitastrond

Snøhetta   Norway   In Veitastrond, a small village belonging to the municipality of Luster, in Norway, one finds these wooden shelters for hikers, a work of Snøhetta, the firm founded by Trædal Thorsen and Craig Dykers. Named Tungestølen, the complex overlooks the Jost

Snøhetta   Norway   The Oslo firm Snøhetta – in collaboration with R8 Property, Skanska, and Asplan Viak – has completed this office building that will consume little energy and produce more than it will need over its lifespan (estimated at 60 years), including in const

Snøhetta   Norway   A work of Snøhetta, the Oslo-based firm of Kjetil Trædal Thorsen and Craig Dyker, this office building produces more than twice the amount of electricity it consumes daily. Wrapped in almost 3,000 square meters of solar panels, it is designed to maxi

Snøhetta   United States   The Norwegian firm Snøhetta has won the competition for the Theodore Roosevelt Presidential Library, which is to go up in Medora, North Dakota, on the banks of the Little Missouri River. Selected out of 40 entries, including the proposals of co-final

Snøhetta   Norway   In 1947 the Norwegian explorer and ethnographer Thor Heyerdahl (1914-2002) led the Kon-Tiki expedition — an 8,000-kilometer journey on a balsa tree raft across the Pacific Ocean, from South America to the Tuamotu Archipelago in French Polynesia – to

Snøhetta   Saudi Arabia   The Qasr Al Hokm Downtown Metro Station, at the heart of Riyadh, is designed as an urban plaza with a large curved stainless steel canopy with a dual function: channeling daylight into the subway station and visually connecting – thanks to the polish

Snøhetta   Canada   Convinced of the importance of engaging the community from the outset, the design for the city’s new library building was completed after two years of conversations with the local community. The new facility, built over an existing Light Rail Train l

Snøhetta   Egypt   The bibliotheca Alexandrina is built on the historic harbor of Alexandria, the city founded by Alexander the Great some 2,300 years ago. The project honors the memory of the library of the ancient city, lost to civilization centuries ago. Characteriz

Snøhetta   United States   The recent introduction of public rail transportation poses many unknowns in Houston, a large and sprawling city with suddenly changing weather, where people are largely dependent on cars. Establishing rail connections between the busier urban areas