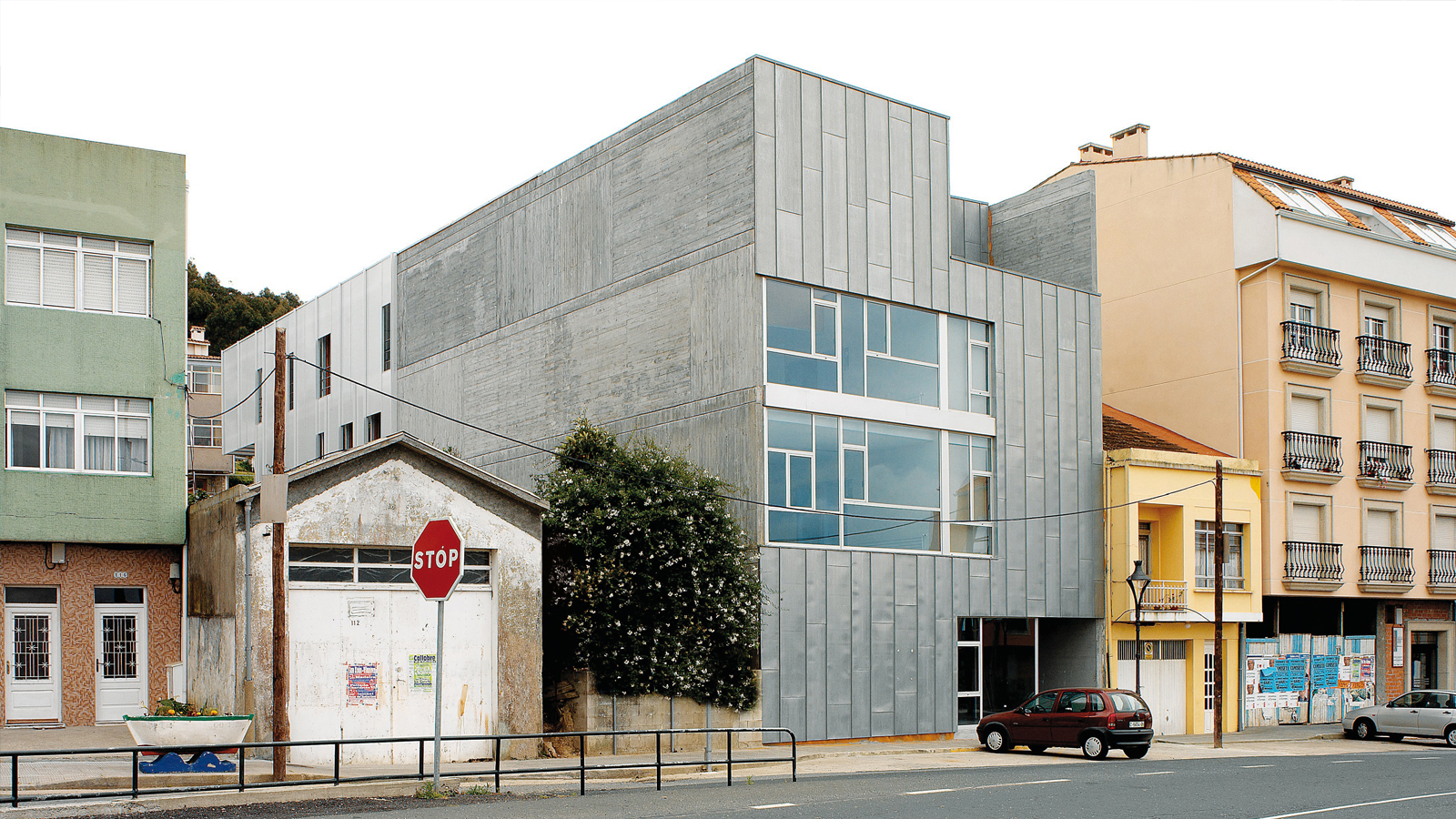 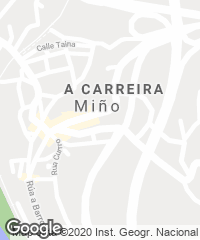 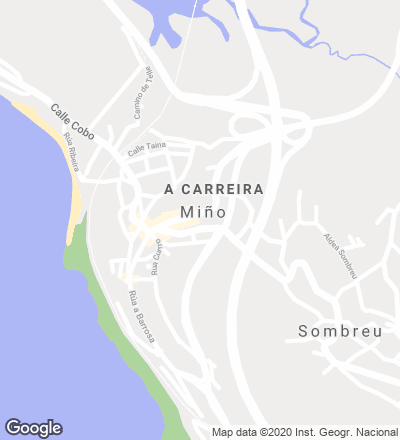 The urban space in which the new health center was to be built was still changing at the time its design was undertaken. While some of the adjoining plots had constructions that were to be demolished and others whose height would foreseeably increase during future refurbishments, other plots remained empty. Aiming to define an unchanging physical context, the new center creates a continuous north-south courtyard – partially buried because of the unevenness between the front and rear streets of the rectangular, narrow and elongated plot – placed between walls of wood, concrete and metal. It is in this particular landscape where it spreads the necessary pieces to house the program. 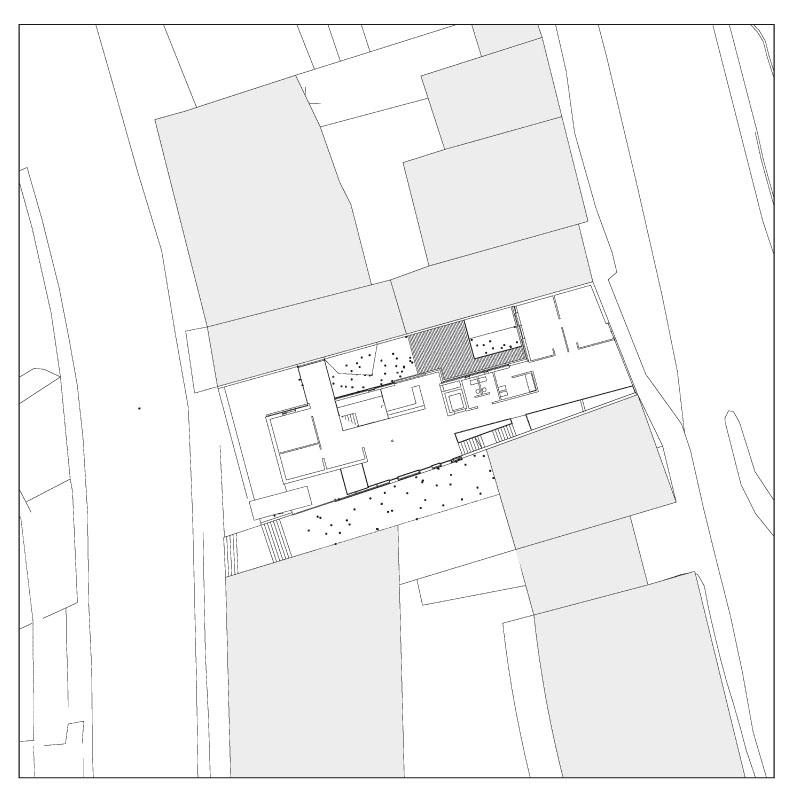 The project tries to control the nearby environment of a neighborhood under development by creating a landscape of its own: the health center is arranged around a north-south patio, its scale defined by the pieces crossing it.

The building is accessed from the rear street through a sloping footbridge which spans the courtyard. From here the building unfolds linearly in the same direction as the courtyard, and the halls appear gradually, as if they were treasures emerged after an excavation. The access level accommodates the general services (reception, administration, social services), and the upper and lower floors the doctor’s offices and waiting areas. On a second floor beneath the access level are the local police premises, that are reached directly from the lower street. Each floor has a courtyard on either side; in the two upper levels, part of the floor plan shifts as a sort of bridge until it reaches the party wall, crossing the void and housing spaces that make the most of the natural light, such as the library or the resting lounge for doctors. 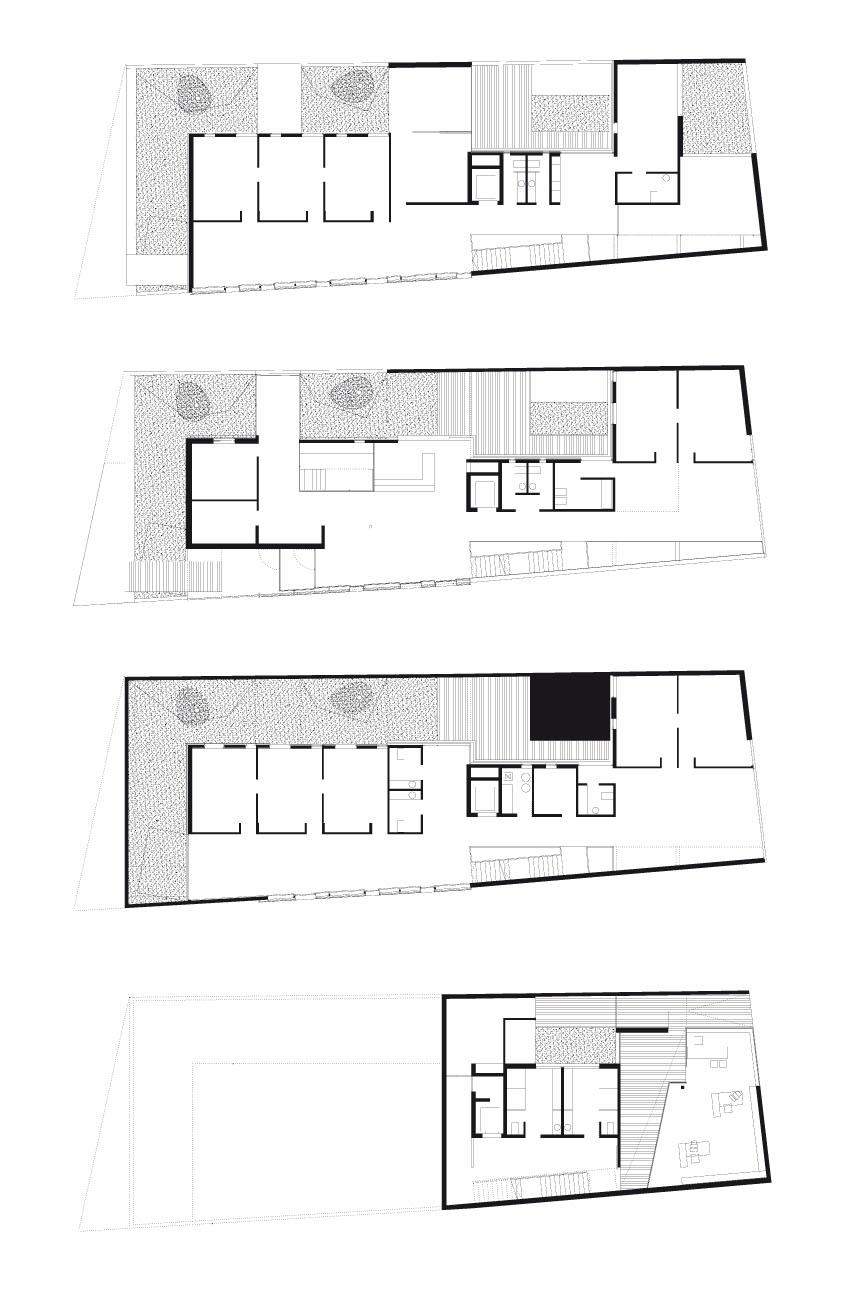 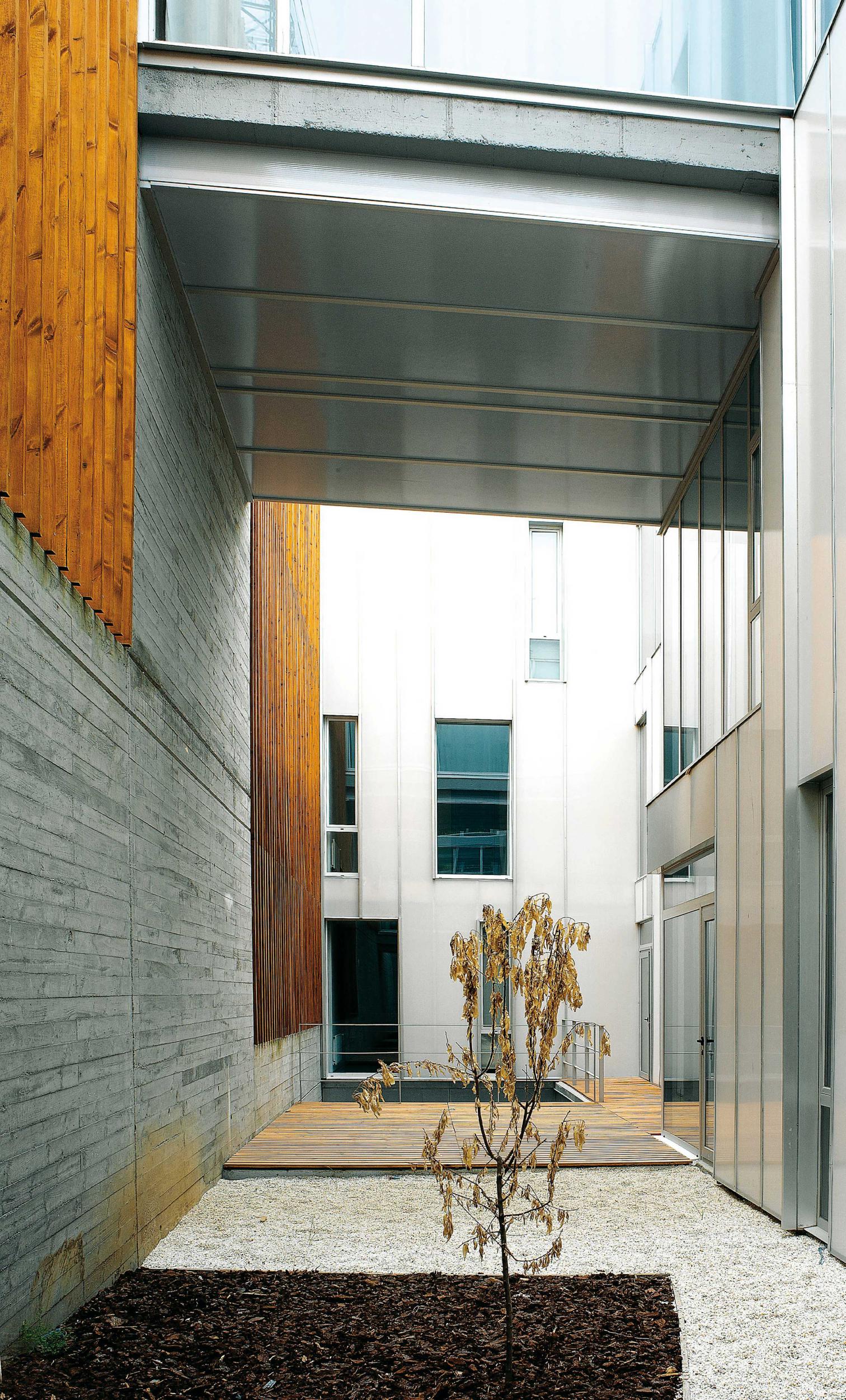 The longitudinal facade combines zinc sheets with polycarbonate panels that qualify the relationship with the exterior by detaching the domestic context of the neighboring plots and turning it into an abstract composition in white (polycarbonate), green (vegetation) and wood (frames). In the interior, wood latticework is combined with bands of horizontal concrete, and the wood pavement with another of gravel with parterres, once again stressing the abstract and artificial character of the created landscape.

The wooden latticeworks superposed to the party walls, the formwork in horizontal concrete bands, the polycarbonate facade and the sand and gravel parterres generate an abstract and introverted atmosphere.

Special attention has been paid to the thermal qualities of the building: in winter the chimney effect is cut off and the greenhouse effect activated, and the polycarbonate and thermal clay walls retain heat and spread it in the interior; in summer, the courtyard favors cross ventilation, and the refreshing air in the partially shaded area cools the remaining space, so reducing energy consumption. 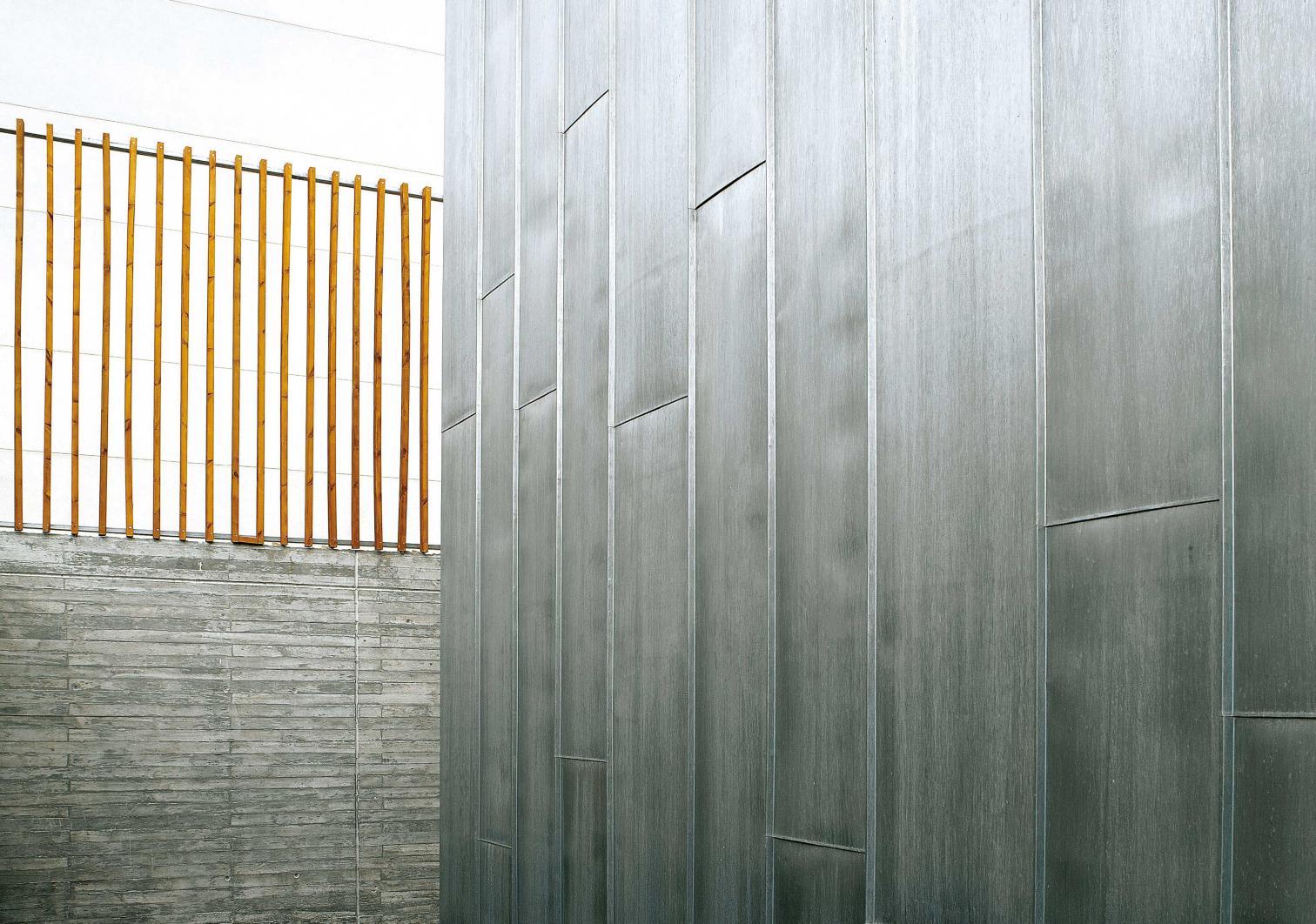 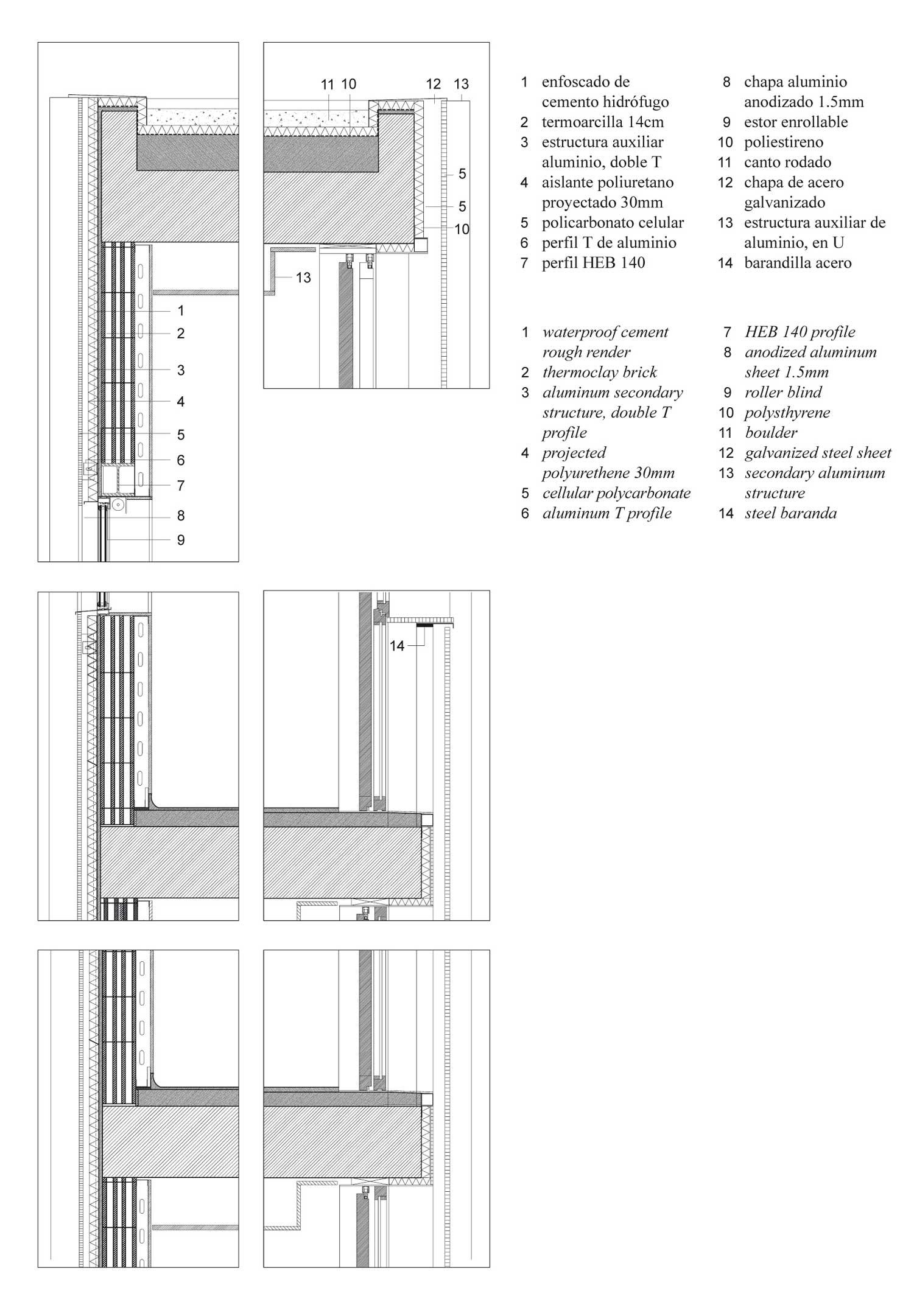 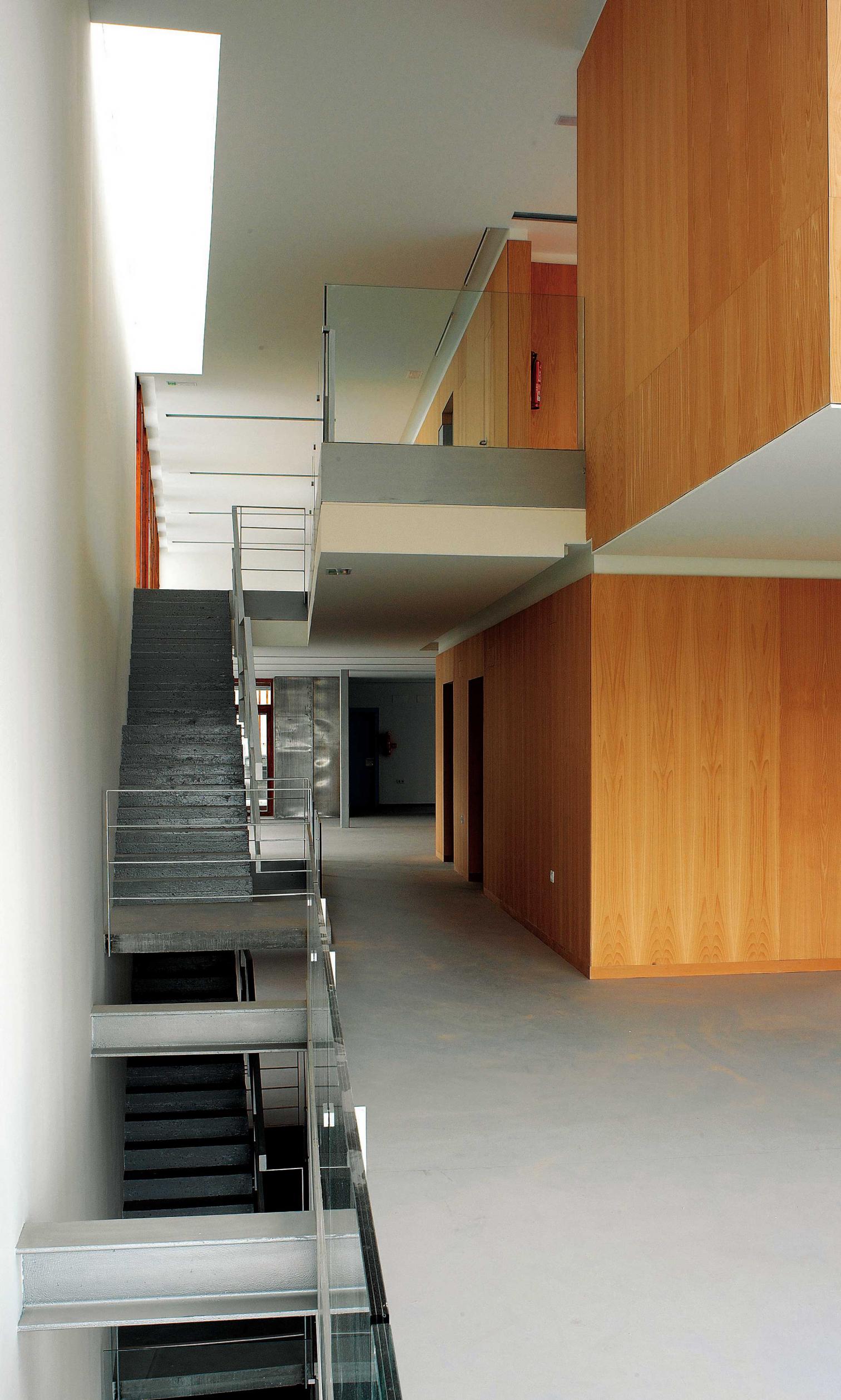 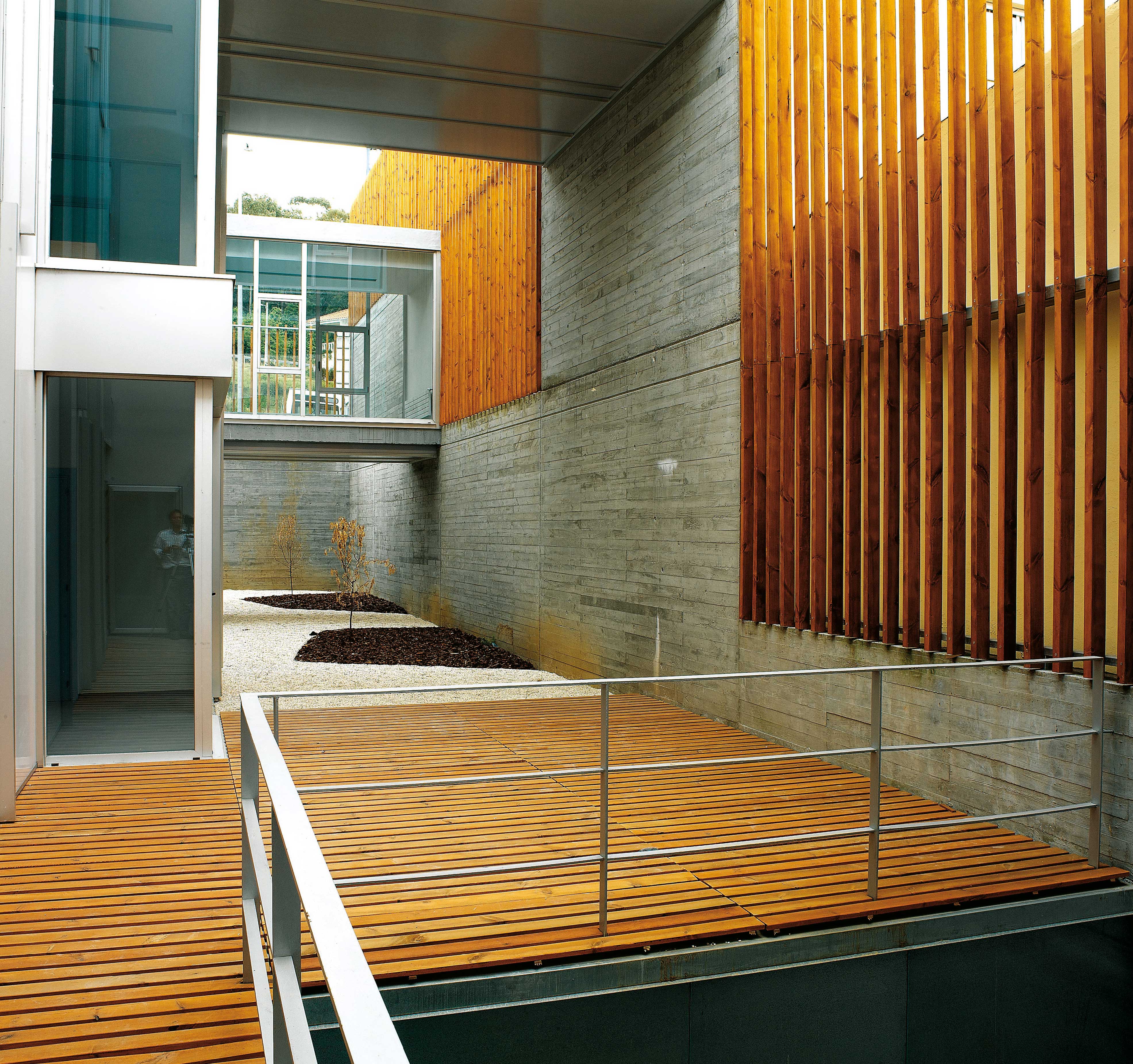 Irisarri + Piñera   Spain   Built on one of the busiest fishing docks of the port of Cangas, on the banks of the Vigo estuary, in the northwest of Spain, this lightweight construction comprises a series of warehouses for the fishermen of this Galician town. Due to its proximity

Irisarri + Piñera   The new headquarters of the Property Registration Office is located in the historic center of the city and remodels a space previously occupied by four old domestic buildings. Following refurbishment, restructuring, and partial replacement strategies

Irisarri + Piñera   Spain   On a deep and narrow plot located in Redondela, a town northeast of the city of Vigo, the single-family house yields before the strong slope of the terrain to look out onto the river, extending its views towards the faraway sea horizon. The layout of

Irisarri + Piñera   Spain   The project presented to the competition held in 2005 foresaw the construction of a space able to undergo changes depending on its use, a space adaptable to different activities and needs. Once completed, the building has proven a flexibility that pe

Irisarri + Piñera   Spain   With an aera of 150,000 square meters,the A Xunqueira campus of the University of Vigo in Pontevedra is located on a slightly isolated site, flanked by the river and the highway. This peculiar feature served as starting point for the redevelopment pl

Irisarri + Piñera   Spain   Colonizing the granite walls of an old Galician farm construction with several new structures of light build, the dwelling echoes the spirit of the place.

Irisarri + Piñera   Spain   The project proposes a new plaza that generates a covered place with access to the different programs held in the complex. This promenade becomes a performative space, and all the public interaction areas open up to it... [+]

Irisarri + Piñera   United Arab Emirates   The building is a lightweight structure containing the different ‘boxes’ (closed spaces for specific exhibition purposes and services), and that functions as a ‘support stage’ for the textile walls that organize the free use areas... [+]

The Hand that Thinks

Francisco G. de Canales   Rafael Moneo: A Theoretical Reflection from within the Profession is the first major retrospective on the oeuvre of the Navarrese architect.

Josep Miàs   Spain   In the Catalan county of Maresme, the small municipality of Arenys de Munt is located 45 kilometers from the city of Barcelona, in the northeastern end of the province. With an important textile industry and a growing service sector, the population,