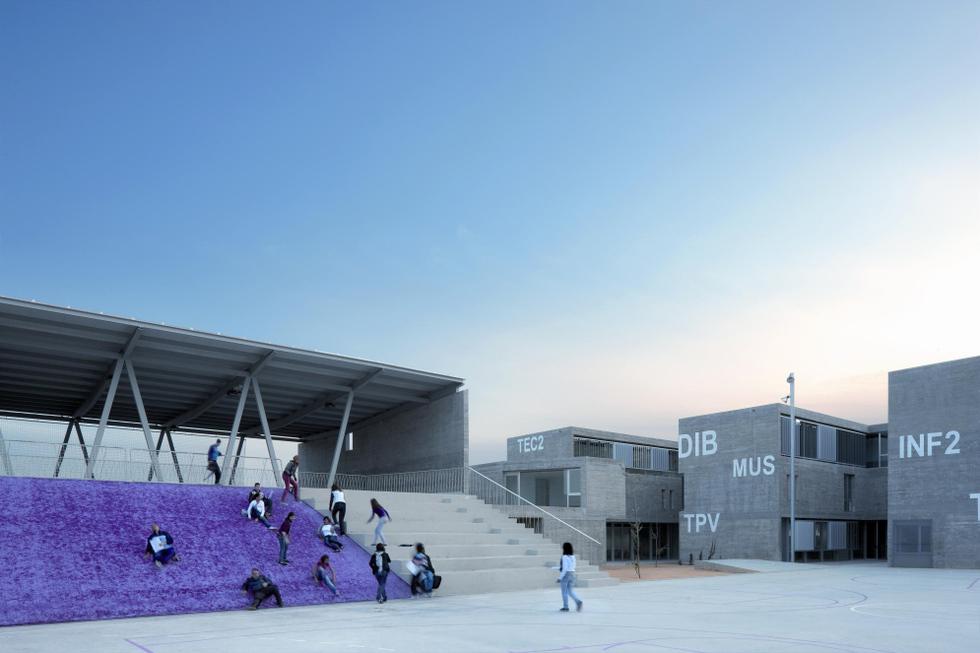 In the 52nd edition of the FAD Awards, four winning works were chosen among the 541 presented to the different categories. The High School in Rafal, Alicante, by Grupo Aranea – directed by Francisco Leyva – has been awarded in the category of Architecture. The jury found that the work is “an exception in a territory ravaged by excessive development”. In a context filled mainly with row housing, the building closes up to the exterior and flows out onto its interior in a comb-shaped layout that generates courtyards between the classrooms. The jury tagged this introverted landscape as an ‘intramural oasis’. The prize in the City and Landscape category went to the Playa de Poniente Promenade in Benidorm, by the architects Carlos Ferrater and Xavier Martí (OAB). In the category of Interior Design, the prize went to the I+Drink bar in Oviedo, by Merche Alcalá and Marion Dönneweg; and as for the Ephemeral Interventions category, the award was presented to the Portuguese Francisco and Manuel Aires Mateus for the set up of the exhibition ‘Weltliteratur’ in the Calouste Gulbenkian Foundation in Lisbon.

Madrid Río  The 2015 Veronica Rudge Green Prize in Urban Design, awarded by Harvard University’s GSD, went to Madrid Río, the project that has transformed the banks of the Manzanares River, a work of the team led by Ginés Garrido, including Madrid st

Having gone through 616 entries, the jury of the 61st FAD Awards, with Fuensanta Nieto chairing, named the winners. The FAD Award for Architecture went to the Playa Flamenca Secondary School in Orihuela (Alicante), by Alfredo Payá, praised for addres

Francisco Mangado   Spain   Teulada-Moraira is an atypical urban center. Though it is divided into two separate  physical units, it is however a single administrative one. Located in Alicante, in a valley that descends from the mountain to the sea, the town gives up neither its

Manuel Ocaña   Spain   Casa Mediterráneo is a public consortium, promoted by the Ministry of Foreign Affairs and the AECI (Spanish Agency for International Cooperation), with the collaboration of the Valencian government and the city councils of Alicante and Benidorm. The

The Catalan architect Toni Gironés, for his interpretation center at the megalithic dolmen of Seró in Artesa de Segre (Lérida), and the Portuguese Pedro Domingos, for the Primary and Secondary School in Sever do Bouga (Portugal), were declared the jo

The results of this year’s FAD Awards for Architecture and Interior Design stick to the tone of previous cycles: on the one hand, concentration on the creative scene of Catalonia; on the other, attention to the Portuguese world.

João Pedro Falcão In the spirit of returning to the disciplinary values of the profession, the FAD Award in the category of Architecture went in its 56th edition to the ‘Assisted pedestrian route from the center to Saint George’s Castle’ by João Pedr

Soto & Maroto   Spain   Associated to  an outdoor culture and blessed with a good weather, the Mediterranean tradition regards its public plazas as the ideal place for the development of commercial activity. Protected by light canopies which are easily set up and taken apar

Javier García-Solera   Spain   Located in La Cala de?Benidorm, near the city’s center, the building is the final materialization of a project presented to a competition for the construction of two residential towers, one to be occupied by young tenants and another one for senior c

Álvaro Siza   Spain   The new campus of the University of Alicante goes up on the grounds of the old military aerodrome of Rabasa. Like an agora of the academic facility, a vast landscaped surface appears delimited by low-rise structures that counteract the vertical natur