London celebrates its longitude, but visitors enjoy its latitude. The bimillenary, which the city has decided to commemorate with the giant, textile Dome in meridian Greenwich, has turned out to be a cultural and organizational disappointment; whereas its newfound relaxed and young spirit, which seems to have pushed London to a parallel several degrees to the south, has crystallized well in the symbolic bazaar of art and trends of the Tate Modern. Both large-scale exhibition projects were launched by the previous, conservative government, but became emblems of New Labour’s two faces; both were funded with Lottery proceeds, but failed or succeeded in a way having little to do with the volume of the subsidy, ten times more in the case of the Dome; and both are situated on the deteriorated right bank of the Thames, but have proven as disparate in their capacity for urban regeneration as in the criticism they have sparked.

The Millennium Dome and the latest Tate are linked together by the tube’s new chain of stations, which prolongs the Jubilee line to service the offices of Canary Wharf and stimulate the development of other zones. In the end this project may well be the most important of all; to be sure, the underground railway system was the most debated subject in the elections for mayor, which with Ken Livingstone’s victory have seen the return à la Tom Jones of the former boss of the GLC (the planning authority of Greater London that Margaret Thatcher dissolved). But Sex Pistols manager Malcolm McLaren, another old leftist who withdrew his candidacy in favor of Red Ken, maintains that the big issues – such as the tube – will always lie beyond the jurisdiction of a mayor, who would do well to concentrate on objectives like keeping the churches permanently open, “the only places left in London where you don’t have to buy anything.”

In fact, London’s renaissance is intricately tied to its consumerist and mediatic Americanization, by which civic culture has given way to the lifestyle packaged by Wallpaper. The prosperity of the nineties has created a cool Britannia not too unlike the swinging London of the sixties, although it might be that the sensationalist and cynical vacuity of many of its leaders is closer to the nihilistic punk of the seventies than to the innocent pop of the previous decade, and the butchered cows of Damien Hirst or dirty beds of Tracey Emin are more indebted to Johnny Rotten and Vivienne Westwood than to Peter Blake and Mary Quant. This mixed wonderland that spurns tradition for spin, composure for emotion, and tea for cappuccino has also built architectures as antithetical as the jovial circus of the Dome and the luminous rigor of the Tate. But these days the Brits bid farewell to Barbara Cartland and John Gielgud at the same time, and it may well be impossible to draw a contemporary national portrait without such a mixture of the trivial and the sublime.

Herzog & de Meuron   United Kingdom   As part of a long term decentralization process, the Tate Gallery commissioned the renovation of its London headquarters in Millbank and its Liverpool site to James Stirling, its branch in St. Ives, Cornwall, to Evans and Shale, and will now move its

Luis Fernández-Galiano   War damage leaves resilient ruins. We use the term ‘urbicide’ to refer to the deliberate destruction of cities to wreck the physical resources and the morale of the opponent, but contemporary metropolises seldom perish. Many ancient cities were unabl 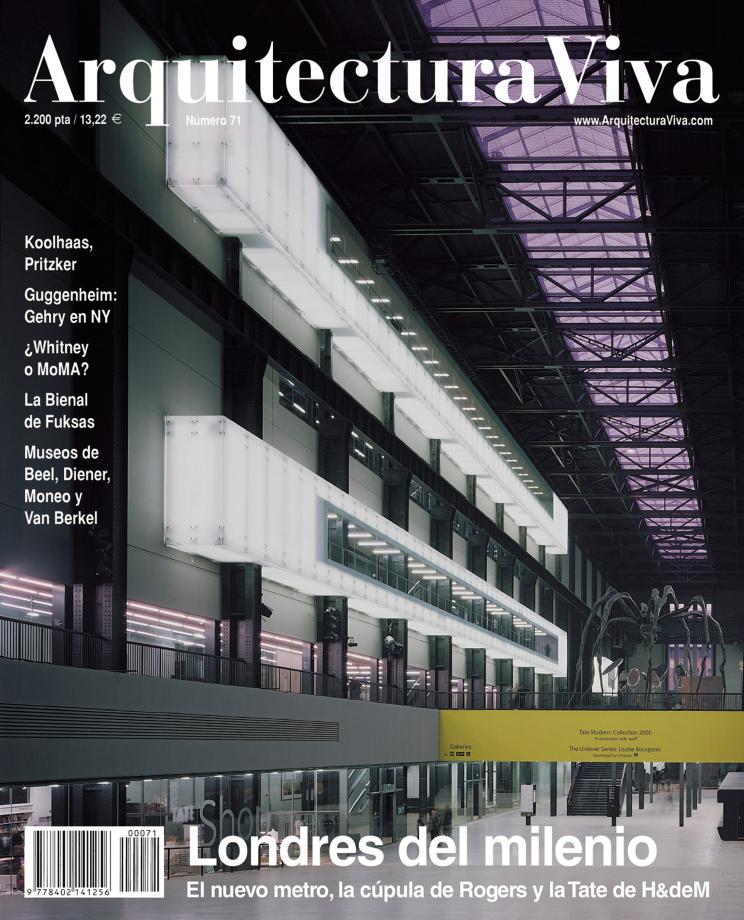