Frank Gehry’s museum in Seattle and Toyo Ito’s media library in Sendai illustrate, on opposite sides of the Pacific, the fluid character of turn-of-century architecture.

All that is solid melts into air. The famous line from The Communist Manifesto has been used by sociologists to sum up the modern experience, and could be just as appropriate to describe the immaterial character of the latest architecture. Marshall Berman used it as a title for his 1982 book on the instability of the modern city, and Zygmunt Bauman’s recently published critical text about the fluid nature of the contemporary world, entitled Liquid Modernity, takes inspiration from the same formula of Marx. But while social analysts deplore the dissolution of community ties in the blurred urbanity of our times, architects celebrate the fading of the solid certainties of geometry and norms with formless or ethereal buildings that aspire to repre-sent the gaseous phase of modernity. 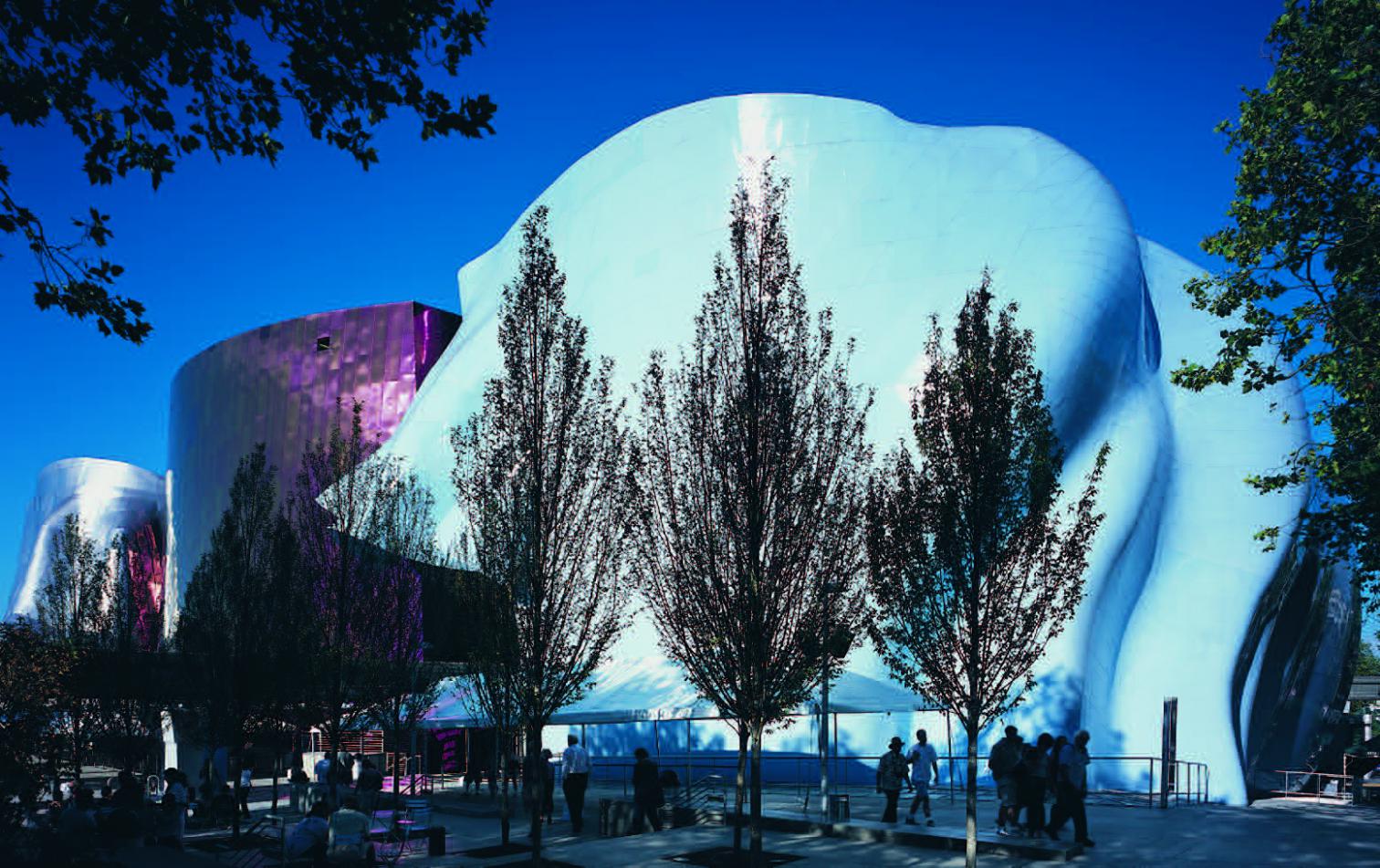 In Seattle, the city of Boeing, Microsoft, Amazon, Starbucks, Frasier and grunge, the Californian Frank Gehry has finished his first great post-Guggenheim work, a rock museum whose multicolored and multiconvulsed volumes make the Bilbao building look classical and grave. Sponsored by the multimillionaire and philanthropist Paul Allen, who founded Microsoft with Bill Gates, the Experience Music Project is a tribute to Jimi Hendrix, the mythical Seattle-born rocker, and its shaken forms evoke the ill-fated musician’s rebelliousness. Located at the foot of the Space Needle, a futuristic tower erected for the World’s Fair of 1962 which became a symbol of the city, the psychedelic museum is penetrated by a monorail also built for the fair, and presents its agitated electrical colors – extracted from Allen’s guitar collection – as a new urban emblem.

High technology at the service of maximum disorder: an intricate framework is concealed under the metallic envelope that clads the apparently soft volumes of Frank Gehry’s Experience Music Project in Seattle.

As in the Guggenheim, Gehry here has used a computer program developed for the aerospace industry that makes it possible to construct impossible forms: the most advanced technology at the service of maximum disorder. And as at Bilbao, the swelling, melting, pulsating volumes immediately became prolific generators of metaphors: jellyfish or broken guitars, crashed cars or solid lava. The six masses of steel and aluminum, lacquered in red, silver, gilden bronze, sky blue, metal gray and iridescent purple claim to contain sound laboratories, electrical libraries and stroboscopic halls, but it all amounts to a colossal amusement theme park that sequesters the visitor in the sparkling caramel-like labyrinth of an electroacoustic jungle: a true cathedral of the age of spectacle. The Dutch Rem Koolhaas, who is building Seattle’s main library with the explicit purpose of giving the city an emblematic work, will surely find it difficult to compete. 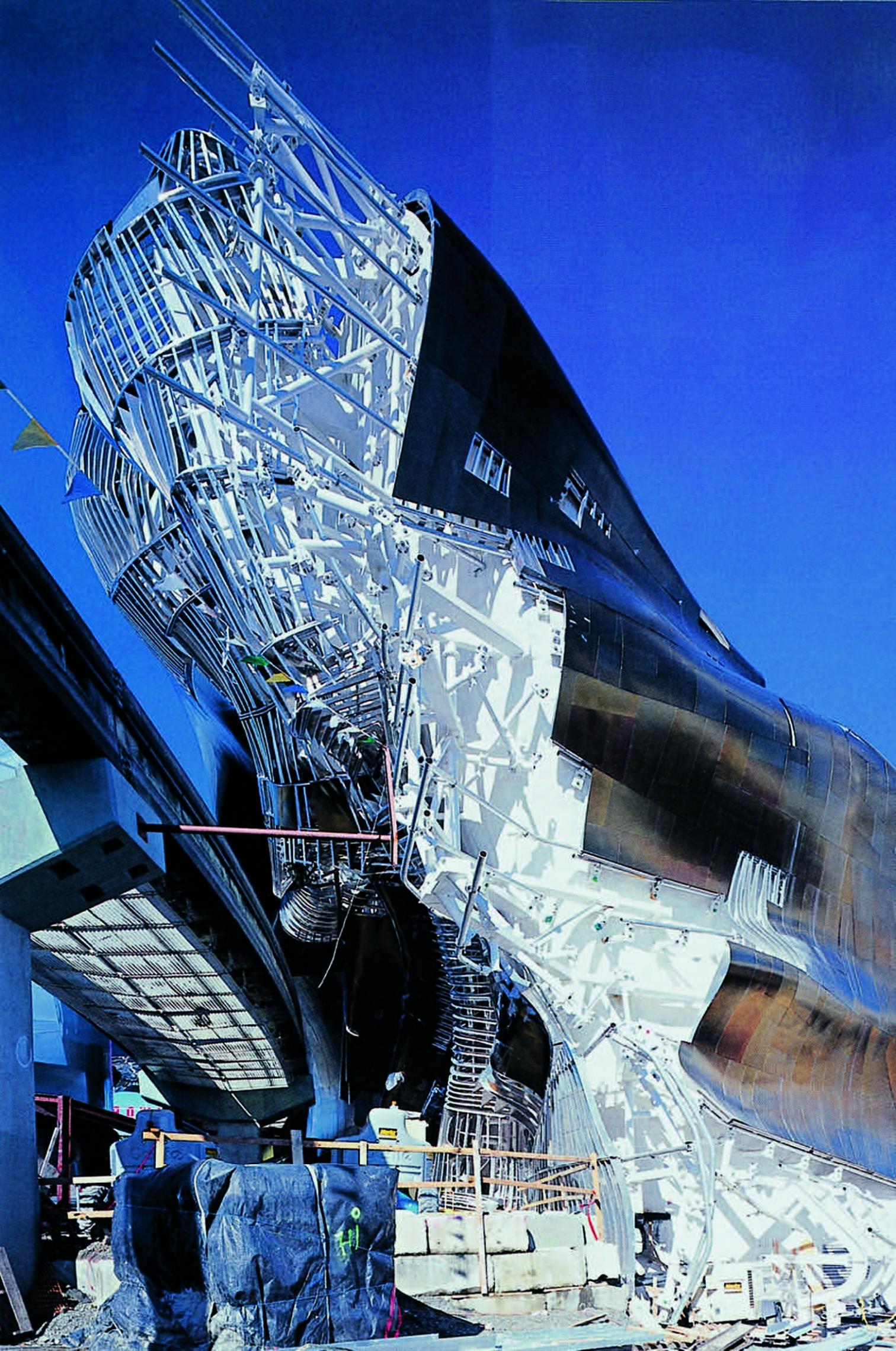 In Sendai across the Pacific, Toyo Ito has com-pleted a media library, at once his most ambitious project and the city’s most representative building. True to his immaterial creed, the Japanese architect came up with seven metal sheets held up horizontally, one over the other, by thirteen seemingly unrigid sheafs made of braided steel tubes, reaching from the ground to the roof, and containing elevators, stairs and piping. The author in fact describes the project as a liquid mass in which threads of algae sway, linked with the fluids of the body and the flow of information, but such intention to evoke dissolution clashes with the formidable structures that the law of gravity and Japan’s anti-seismic guidelines impose, and the subtle woven locks of the translucent model have turned into dense lattice-works of thick steel tubes that emphatically sustain the rhetorical lightness of this aerial work.

In the Sendai media library, Toyo Ito shows his desire to pursue an immaterial architecture and evokes the changing geometry of fluids with an impressive structural display: what he names ‘flexible stalks’, compared as well with threads of algae swaying in a liquid mass, are actually thirteen sheafs of steel tubes that house the elevators, the staircases and the piping systems of the building in their interior.

Frank Gehry’s soft masses and Toyo Ito’s flexible stalks evoke the changing geometry of fluids, but with the help of an extraordinary structural deployment, which bears the seeming lightness of architectures through constructional feats of great complexity. In the case of the Seattle museum, the warped metal skin is placed over a mesh of complex frameworks anchored with pedestals to giant twisted ribs of steel: a vertiginously confusing system that had to be calculated, as in Bilbao, with the aid of the computer program Catia. And in the Sendai media library, four of the structural bundles employ a dense profusion of cylindrical metal supports with a diameter of 240 mm, while the other nine use 160 mm diameter tubes, forming thick bas-kets of steel whose solid materiality contradicts the project’s aspirations to evanescence. 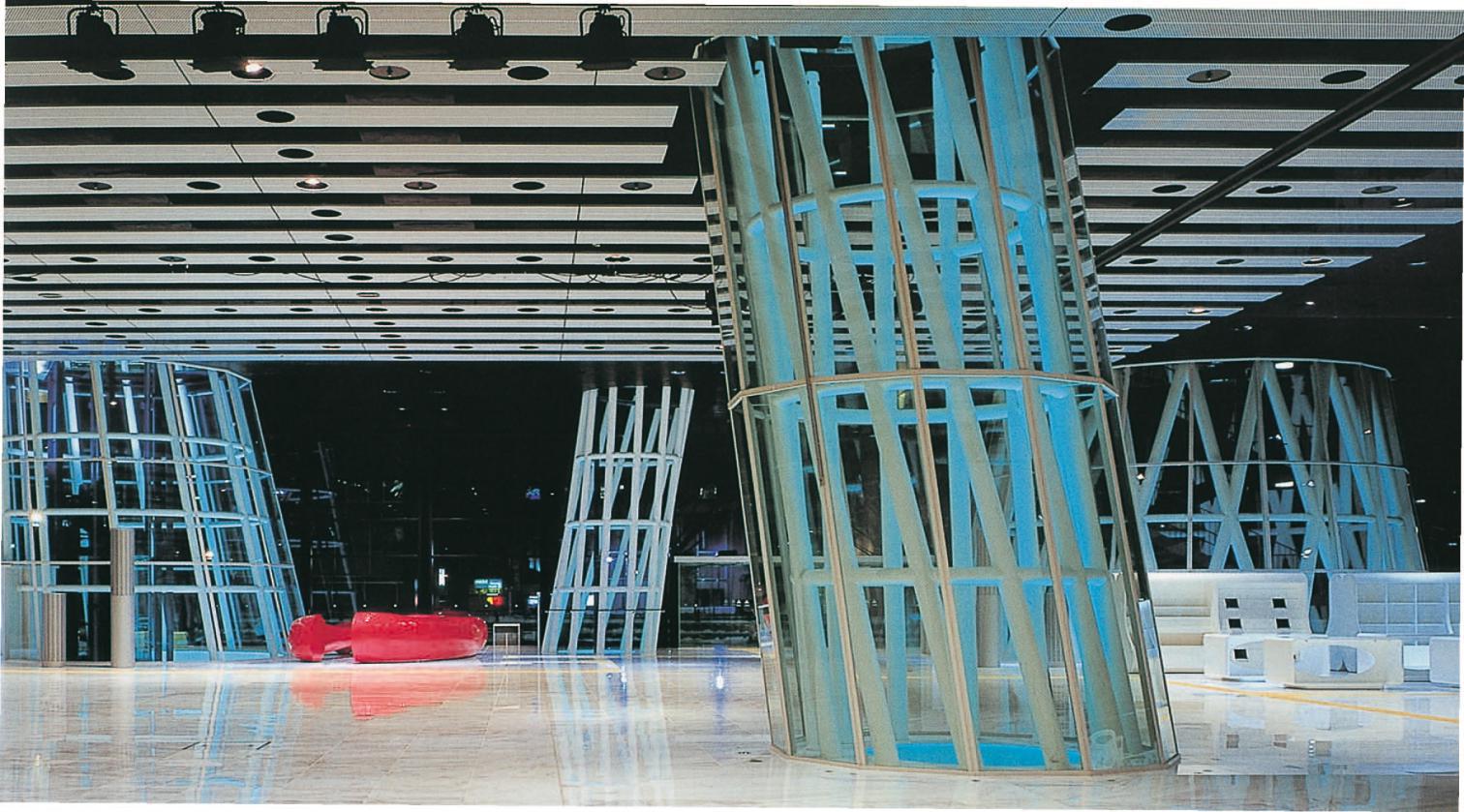 Whether liquid or gaseous, contemporary architecture cannot escape what Max Weber called the iron cage of the modern economy and the conclusive material and symbolic logic of its processes, which dissolve what seemed so solid while fabricating an armor-plated frame that serves as a scaffolding for the fortuitous uncertainty of Baudelairian modernity. Its critics, from Christopher Lasch to Richard Sennett and Pierre Bordieu to Robert Putnam, have lamented the narcissistic and corrosive individualism that is untying the intricate scheme of social bonds otherwise dependent on the tenacious continuity of urban fabrics. In the unraveled landscapes of our times, randomly ruined by the iron law of profit, formless or deliquescent architectures illustrate the expansive decomposition of the world as described 150 years ago by the Karl Marx who wrote: “All that is solid melts into air.” 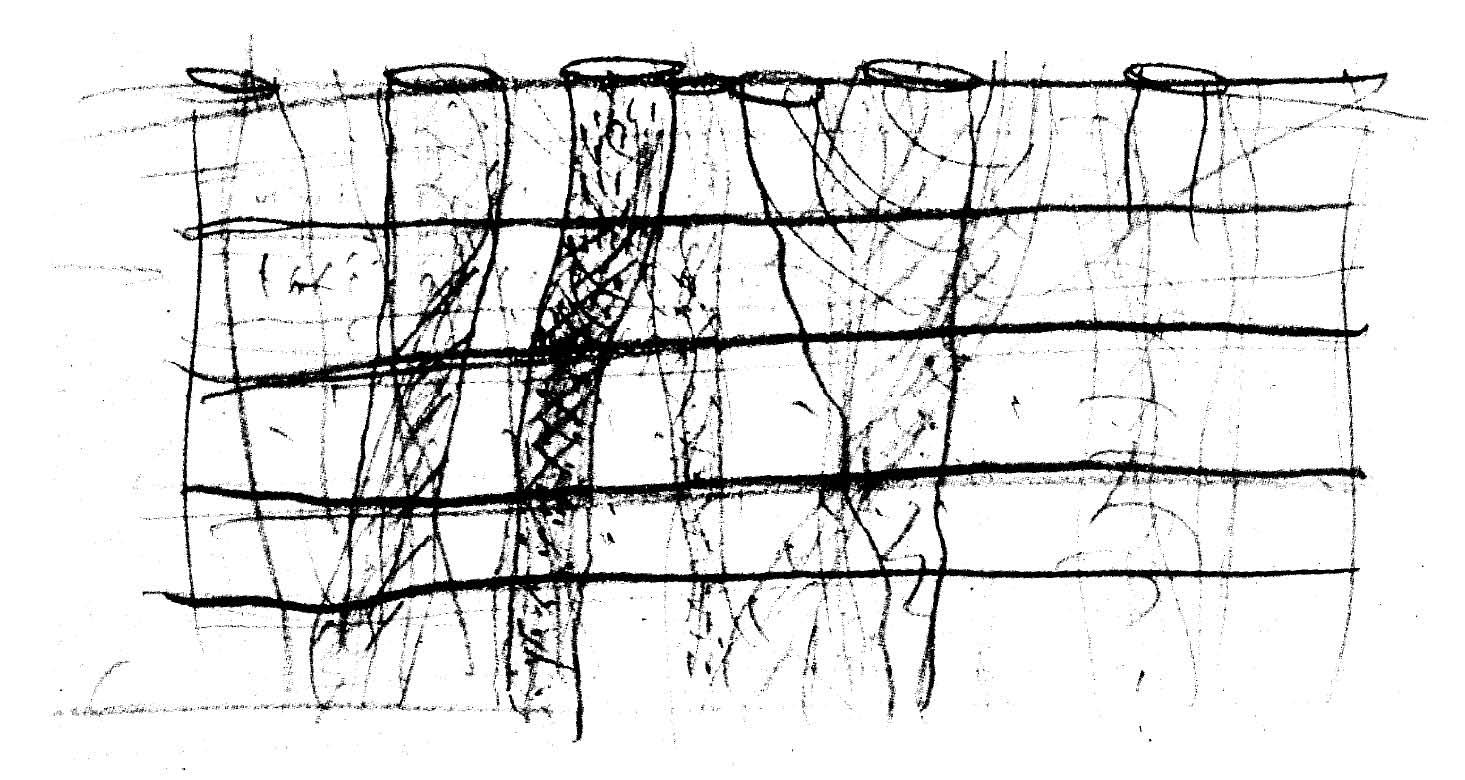