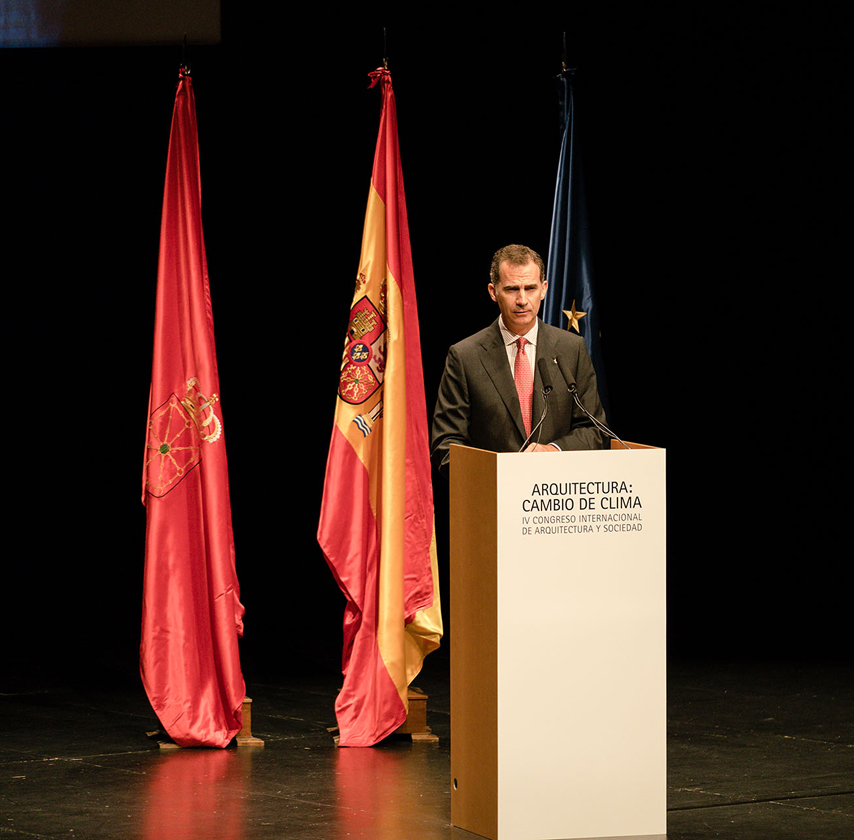 The fourth of the biennial international congresses organized by the Fundación Arquitectura y Sociedad took place last week, bringing a cast of leading figures of the world architecture scene to Pamplona to debate around this year’s motto: ‘Architecture: Change of Climate.’ Previous cycles tackled themes of great relevance in times of crisis and austerity: ‘More for Less,’ ‘The Common,’ and ‘Necessary Architecture.’ Now the focus was on sustainability and the change of attitude that, in response to it and other factors, is happening in the profession. The event was put together with the support of Arquitectura Viva, and held, once again, at the Baluarte auditorium and convention center in the Navarrese capital. This time the inauguration was graced by the King and Queen of Spain – who had come to the opening of the first congress, still as Crown Prince and Princess – and Felipe VI was joined in addressing the audience by Carlos Solchaga, president of the Fundación Arquitectura y Sociedad, Francisco Mangado, founding trustee, and Uxue Barkos, president of the Government of Navarre.

In his speech, the king called for a full understanding of the reach of the congress slogan, referring to “the true meaning of the ‘change of climate’ in which we are immersed; a change of mood and attitude that the ecological and social transitions produced by climate change make necessary.” An interpretation reinforced by the welcome of Luis Fernández-Galiano, congress director, who made a quick summary of the themes of previous cycles and stated the new challenges that architects face, an image behind him showing the Blue Marble, the iconic photograph of Earth taken from inside the Apollo 17 spacecraft.

The first lecture was delivered by a Rem Koolhaas indignant at the current European scene, the rise of populisms, and Brexit. The presence of the world-famous Dutch architect had of course raised great expectations, and he did not disappoint the Baluarte crowd. Audacious and visionary, Koolhaas described the world that presented itself to him when he was still a young journalist, doing so like someone newly arrived from Mars, totally in the dark about our planet. This distancing from reality gave the ‘Change of Climate’ concept a twist, making Europe’s political and social climate the urgent matter for architecture to confront, along with his worries about oblivion and the degradation that the rural environment is suffering. Another Pritzker laureate followed, the Swiss Pierre de Meuron, whose conference was a counterpoint to the questions posed by the Koolhaas. De Meuron painstakingly presented a recent work of his firm, the Musée Unterlinden in Colmar, France, bringing the debate back into the architectural sphere by discussing all the scales of the project with the aid of an exhaustive series of images that highlighted the creativity and quality of the oeuvre of Herzog & de Meuron.

The afternoon session began with the Norwegian Kjetil Thorsen showing works of his studio, Snøhetta, through a very well woven discourse on creative processes, teamwork, and the social impact of architecture. “ Architecture does not exist without people, it is based on a humanist tradition, and for this reason only exists when it interacts with users. ” Thorsen discussed diverse situations where some of his works, such as the Opera House in Olso or the Library of Alexandria, have come to have unforeseen uses and even been protected by the citizenry, ultimately the best guarantee of a building’s durability.

For his part, Jean-Philippe Vassal of the Paris office Lacaton & Vassal wrapped up day one with an inspiring presentation. With his characteristic calm the French architect recounted the firm’s trajectory illustrating the theories of ecology, saving, and economy of means that define all its works. Constructed on honesty and clarity, Vassal’s lecture elicited the admiration of the audience – though many were already well acquainted with his work – and threw light on the strategies that can be more effective in working toward the sustainability of the built environment.

Day two began with the turn of Iñaki Ábalos of Ábalos + Sentkiewicz. Having just ended his stint as Chair of the Department of Architecture at the Harvard Graduate School of Design, he went through a selection of works and projects where climate and energy considerations have played a determining role. Louisa Hutton, a British architect based in Berlin whose practice, Sauerbruch Hutton, has become an international benchmark in matters of sustainability, continued along the line set by Ábalos, presenting projects where technical aspects have provided answers to climate demands, but also where aesthetics have been a fundamental attraction for society to “love and respect the buildings and cities it inhabits,” and emphasizing that “sustainable architecture requires this active involvement of users.”

It fell on Dietmar Eberle to open the congress’s final session, and his intervention was, along with Hutton’s, the most rigorous in terms of bioclimatic construction and environmental impact. Eberle, co-director of Baumschlager Eberle and professor at ETH Zurich, offered specific figures on the situation of the planet, as well as information on energy quantification and climate control methods. His conclusions are the fruit of research efforts and of a career devoted to optimizing constructions to the point of not needing mechanical air conditioning devices. He stressed the need to act locally with a cloud of interrelated data that enable us to build correctly in each place, while warning against the danger of extrapolating statistics beyond context. Then came Winy Maas, who gave a radical shift to the tone and message of preceding speakers. The lecture of one of the members of the Dutch team MVRDV, which was an exciting surprise in its pace and content, was an incessant rain of proposals – some real, others utopian – for new fields of research opening up in the range of activities of architects. Futuristic visions of the adaptable city, applications of nanotechnology to materials, new urban ecosystems that can enrich biodiversity, and the possibilities of plagiary in architecture were just some of the themes – syncopated by a repeated and persistent “ What’s next? ” – through which Winy Maas proposed to stretch the limits of the profession for the future. Finally, Bjarke Ingels closed the congress with a tour through some of his works, using them to illustrate issues of environmental adaptation and ecological awareness from a social and hedonistic angle. The Danish architect, also one of the most awaited, praised the efficiency of vernacular architecture and explained how modern techniques and engineering make it possible to apply this wisdom in new contexts. Through some of MVRDV’s most innovative projects, such as the Dryline in New York – a linear operation along the Manhattan waterfront that serves as a friction barrier against possible hurricanes and floods – or the waste-to-energy plant in Copenhagen , he showed how the development of public infrastructures can efficiently contribute to the urban environment and have a positive impact on people’s awareness of environmental questions.

The lectures were complemented by round table discussions between speakers and relators – Richard Ingersoll, Llàtzer Moix, Antonio Lucas, Peter Buchanan, and Vicente Verdú –, who also conducted private interviews with the speakers of their respective sessions. The interviews will be the core of the book to be published by Arquitectura Viva in autumn, joining those that documented the congresses held in 2010, 2012, and 2014. Fundación Arquitectura y Sociedad Imagen Subliminal / Miguel de Guzmán 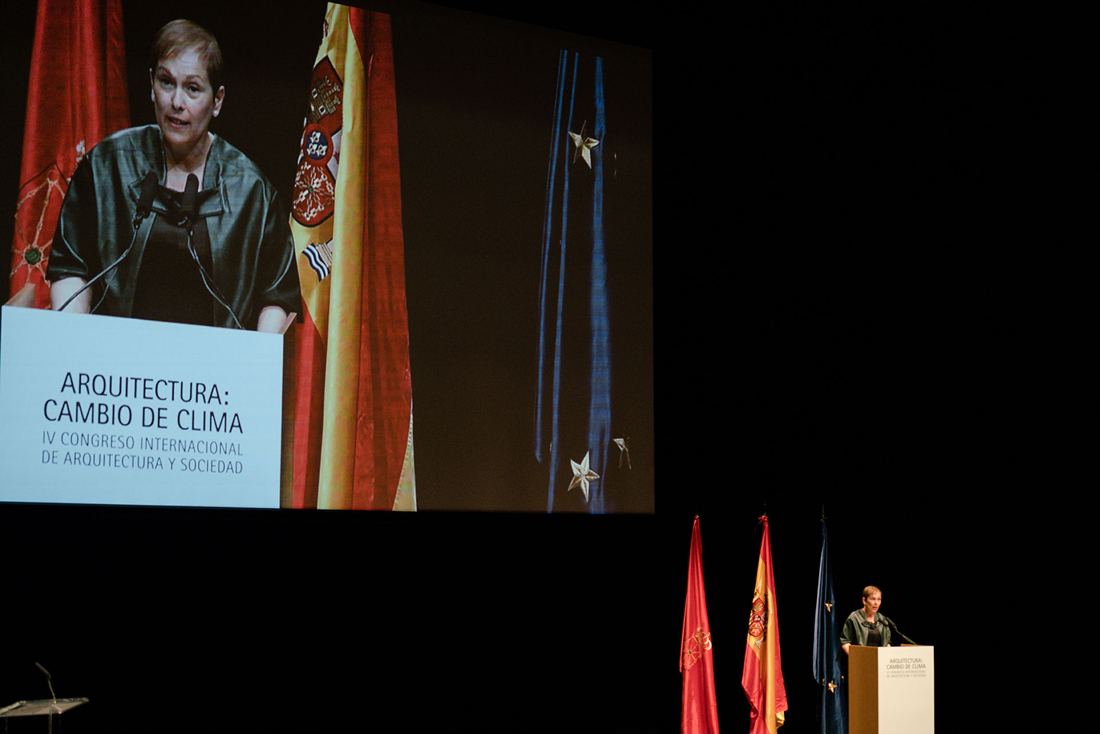 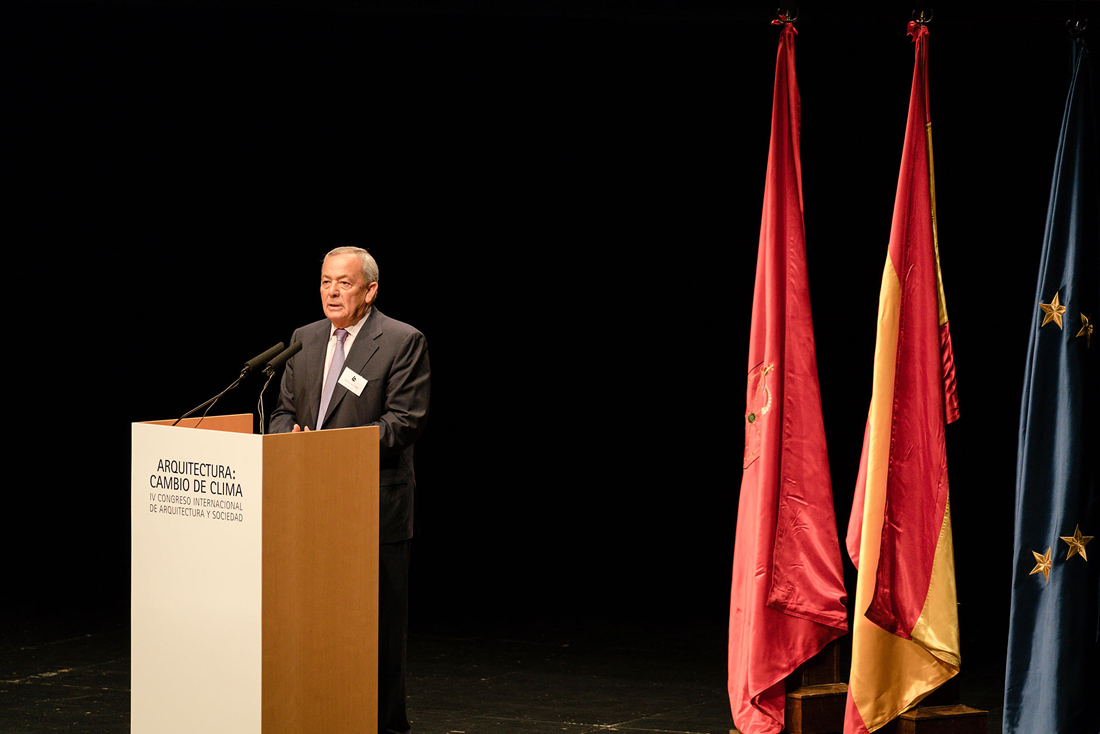 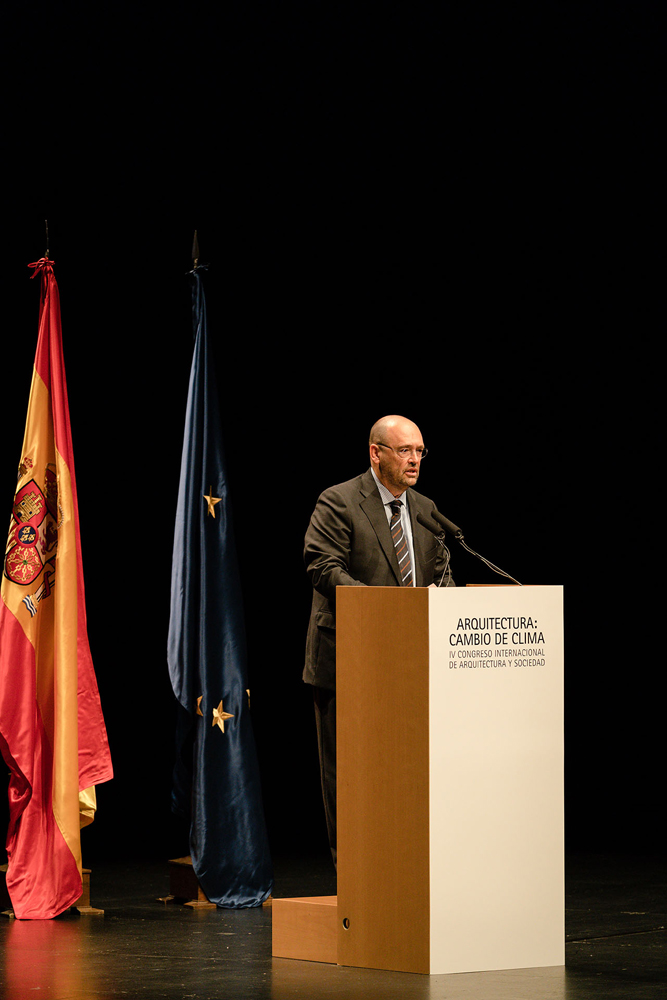 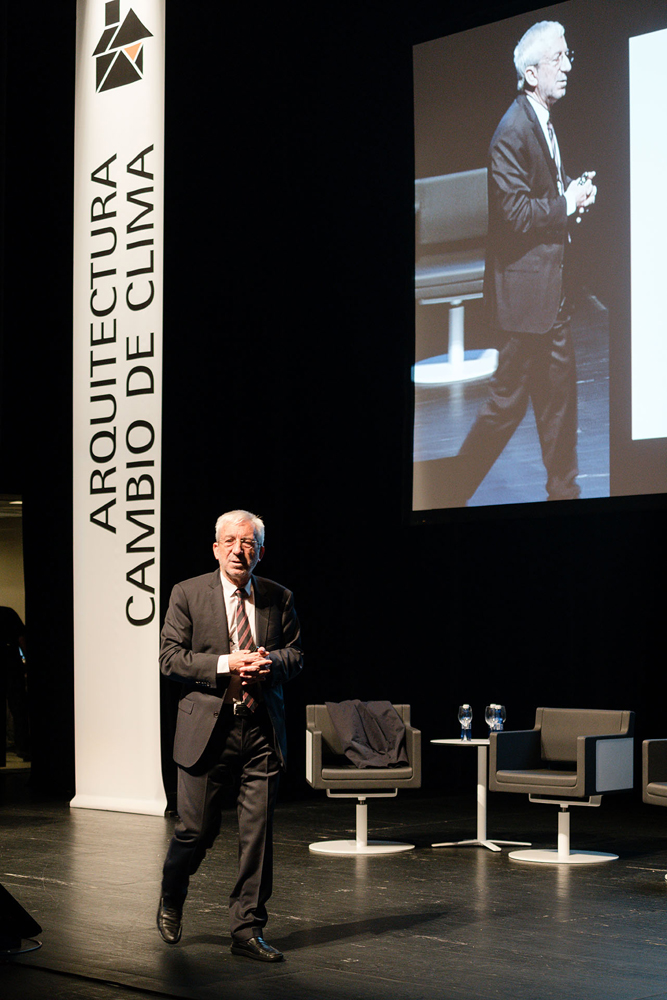 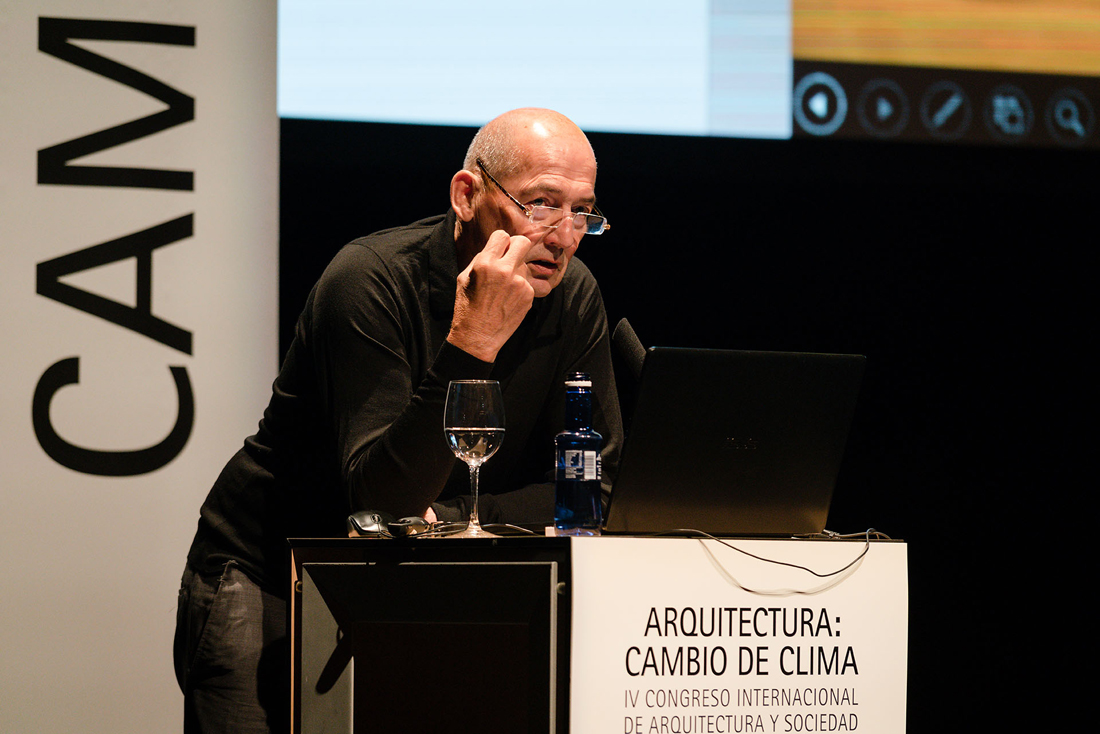 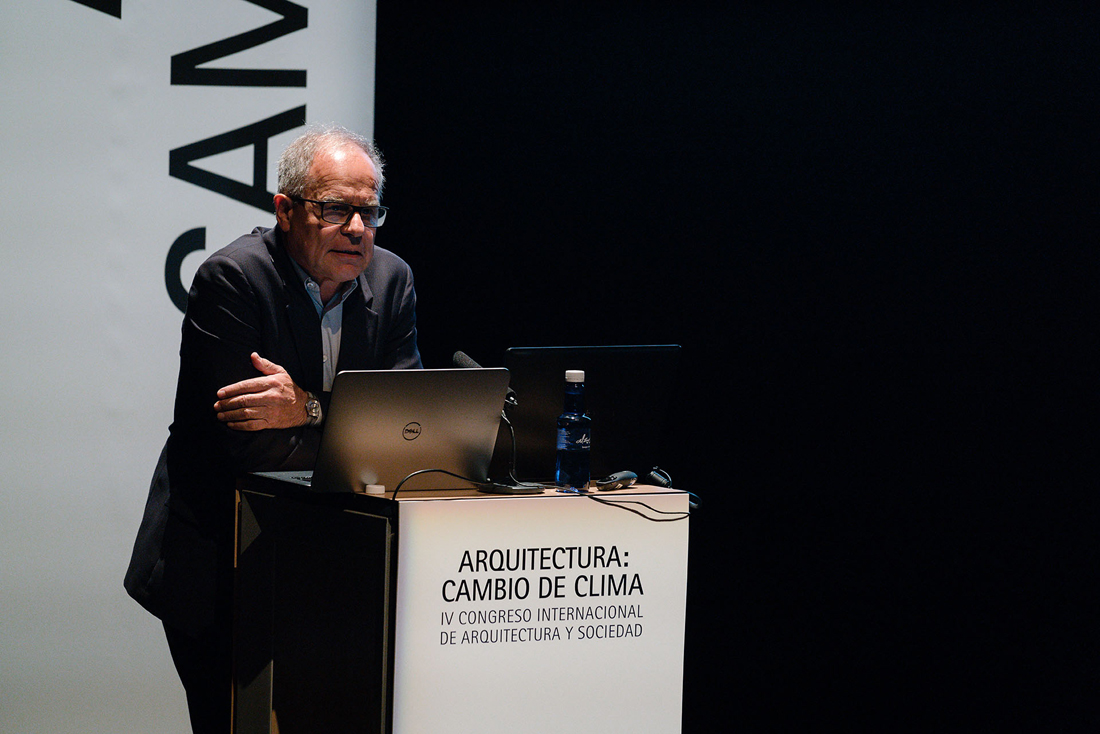 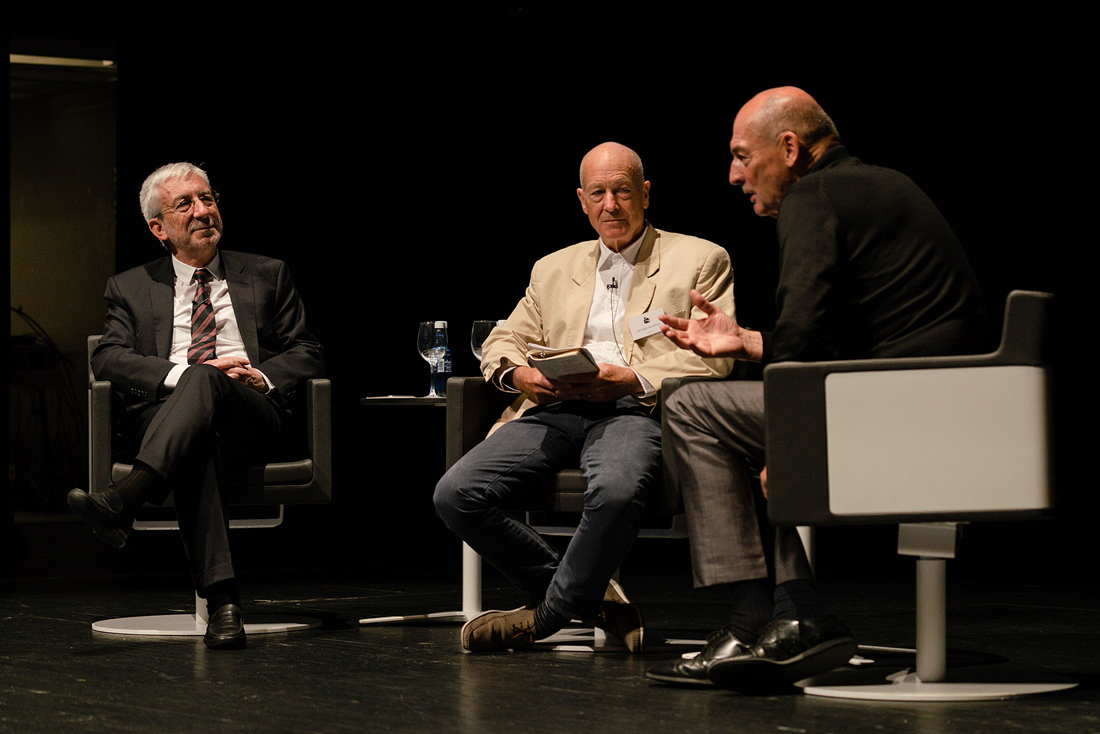 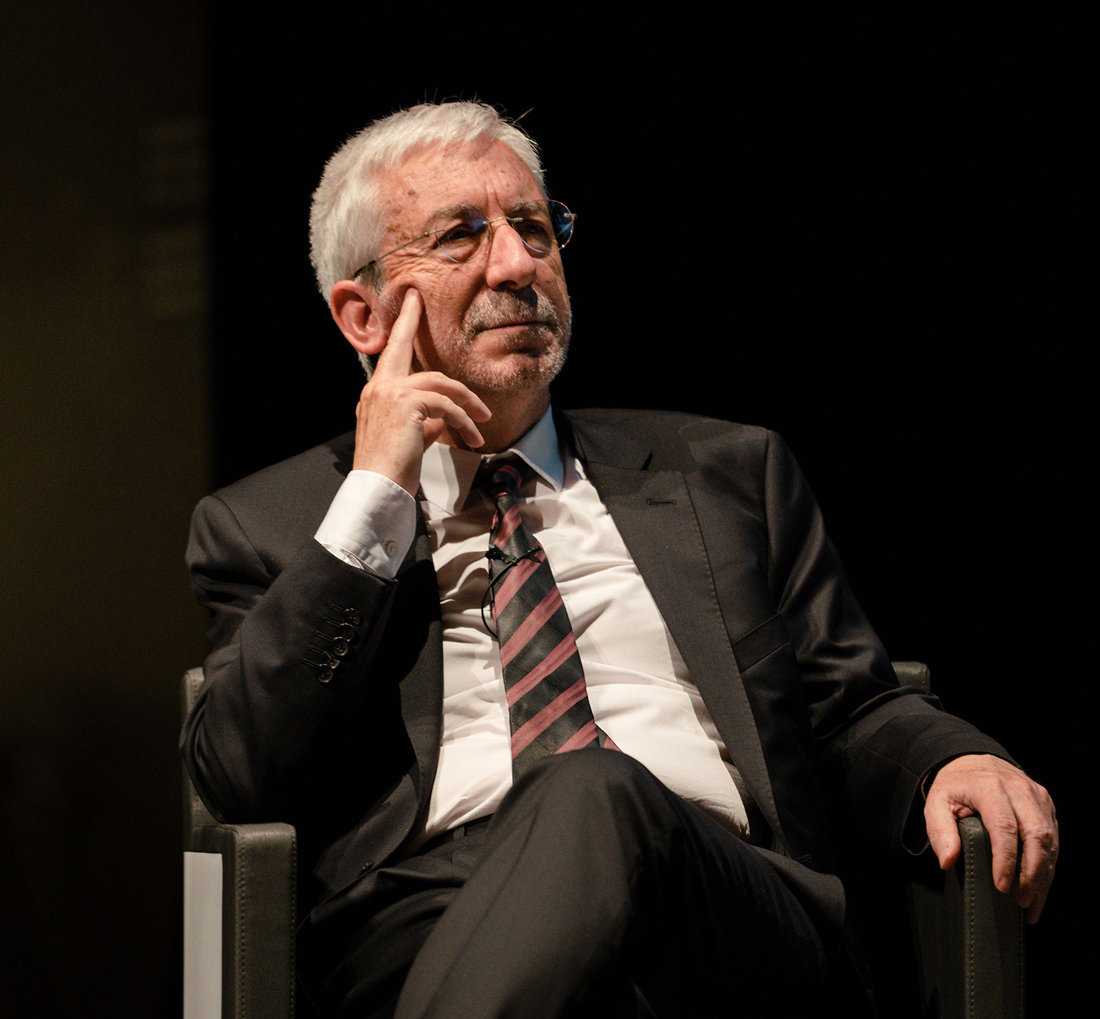 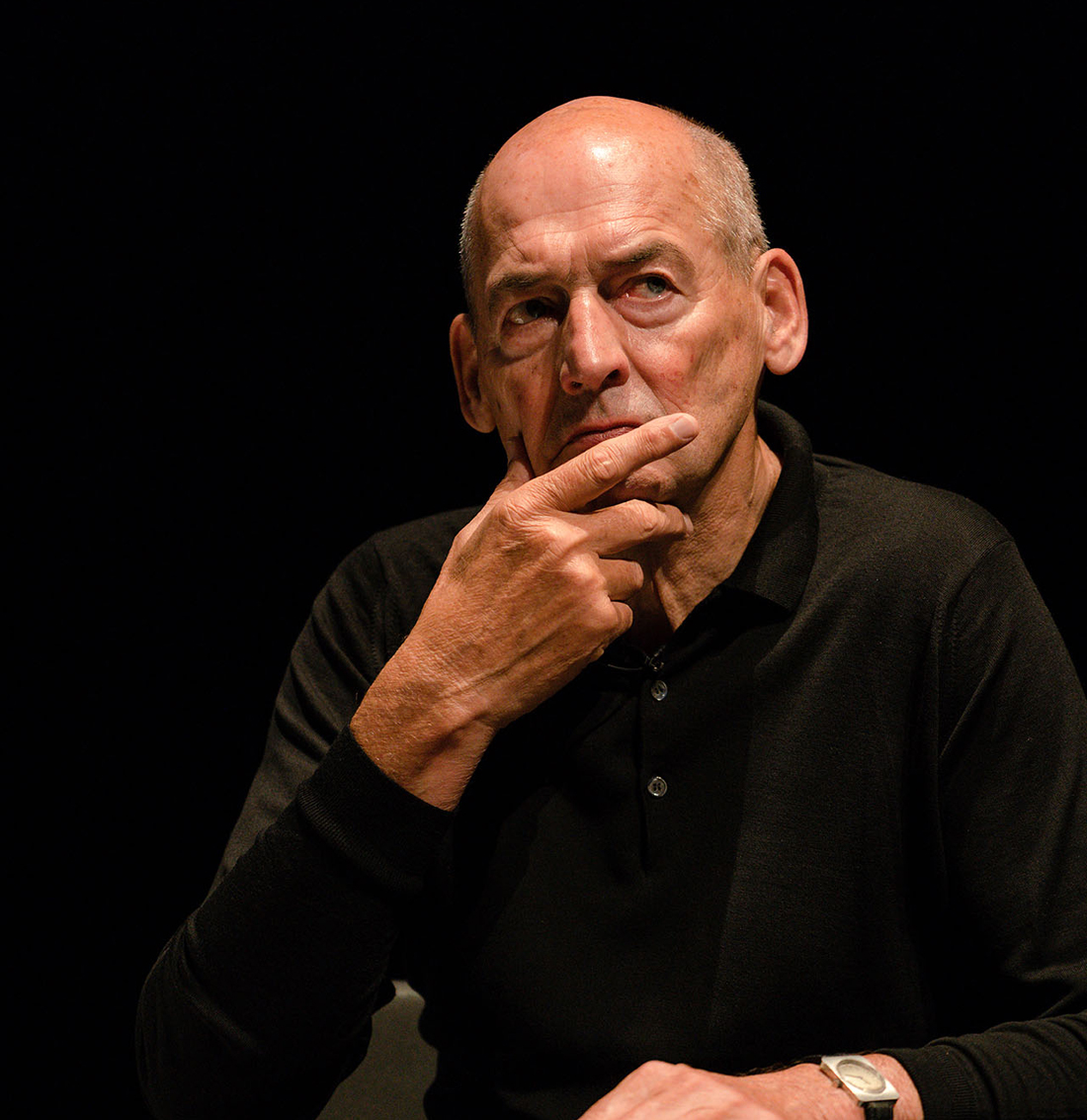 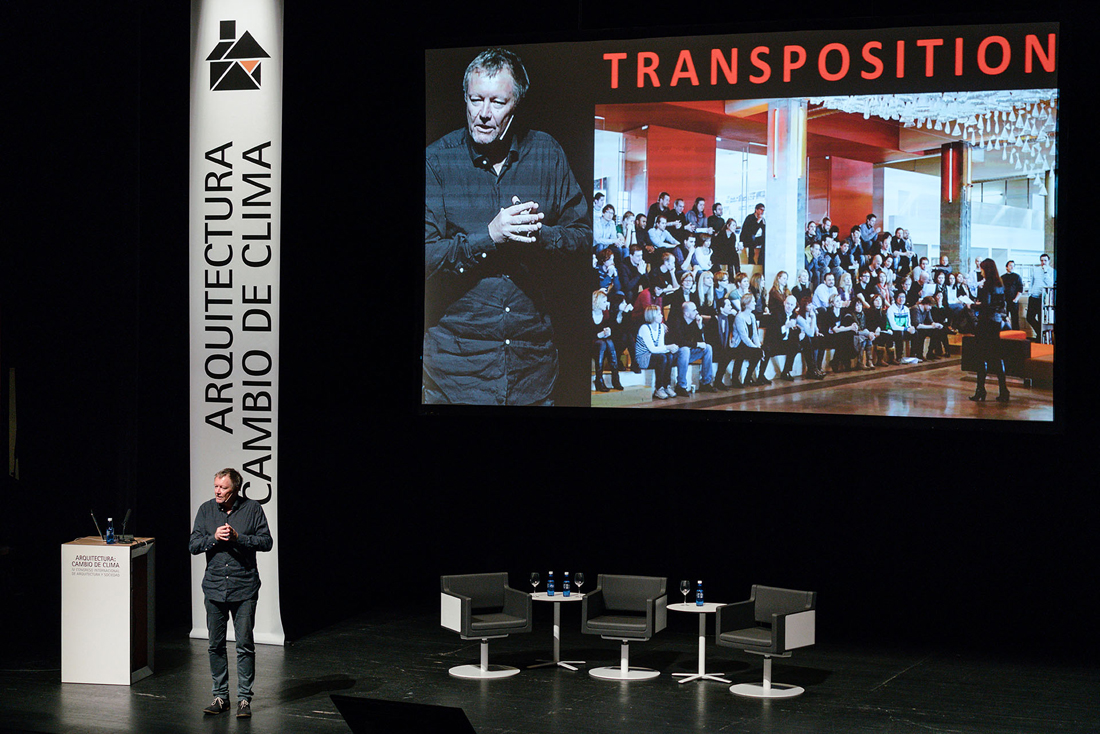 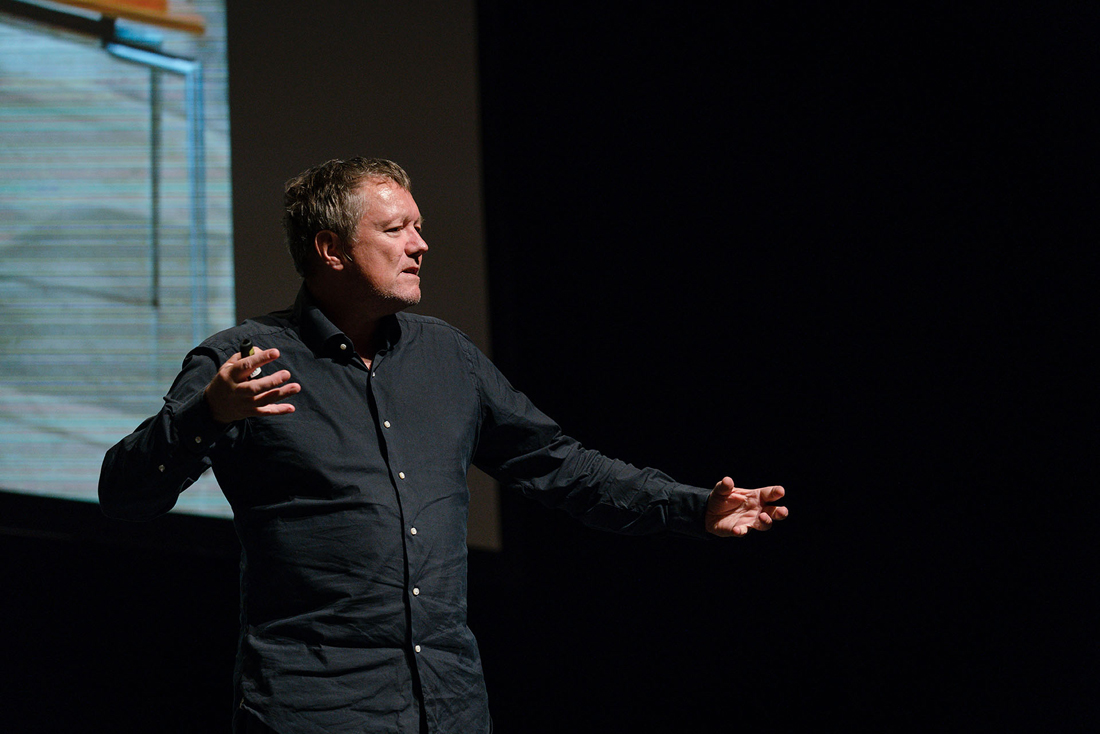 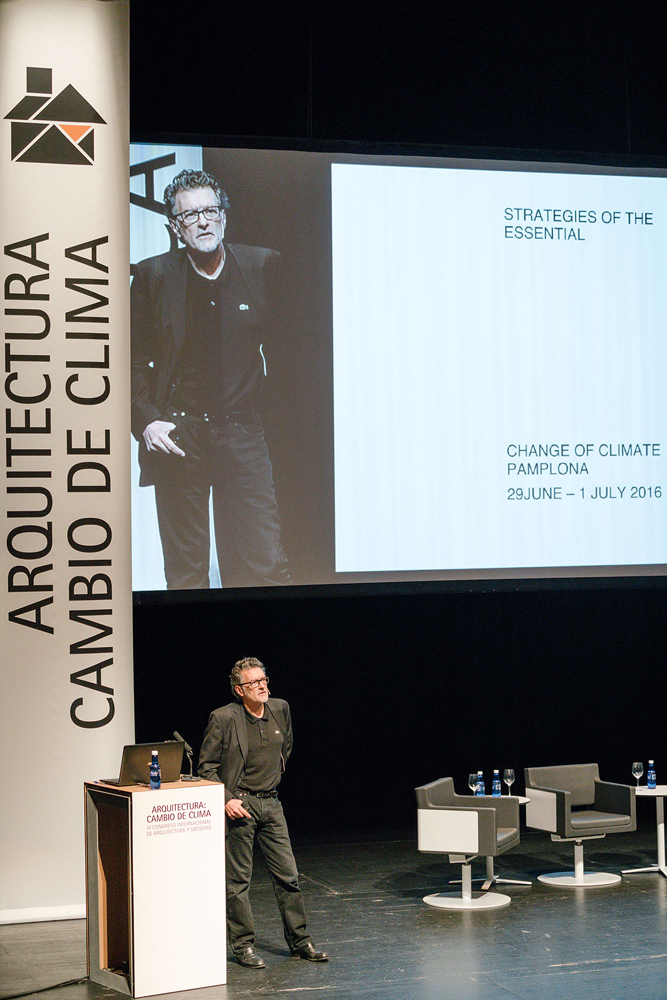 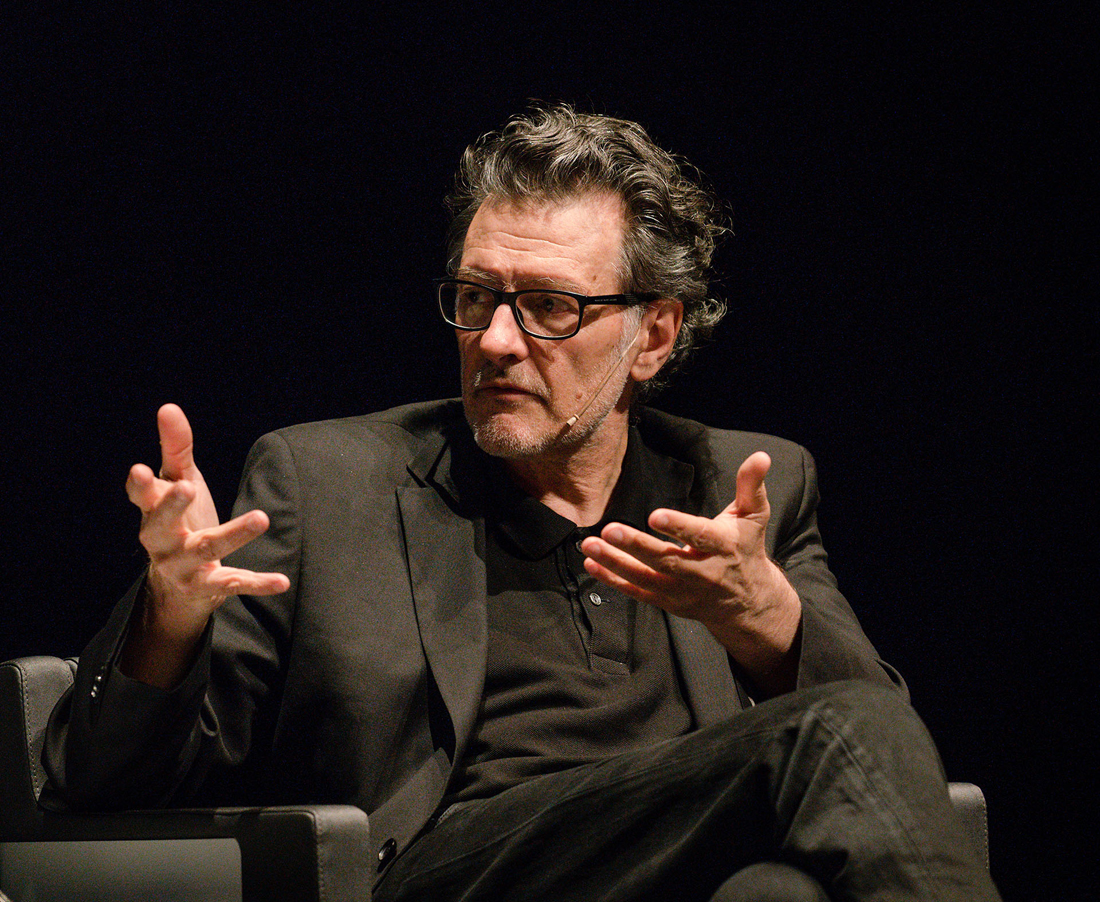 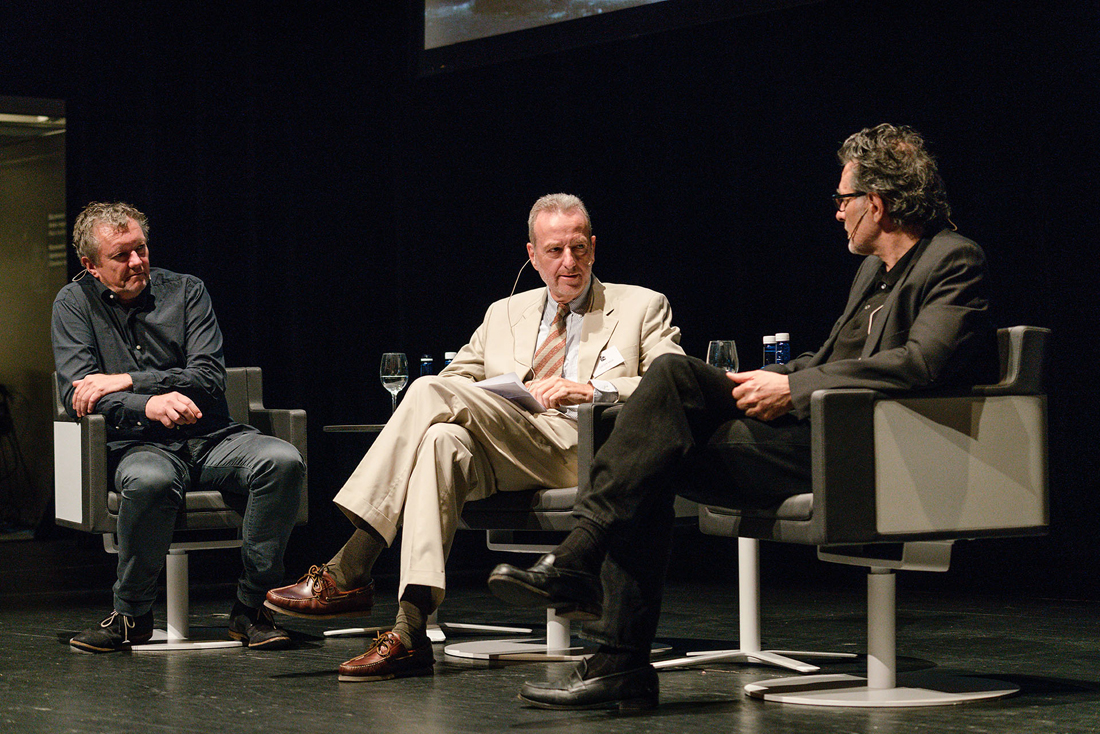 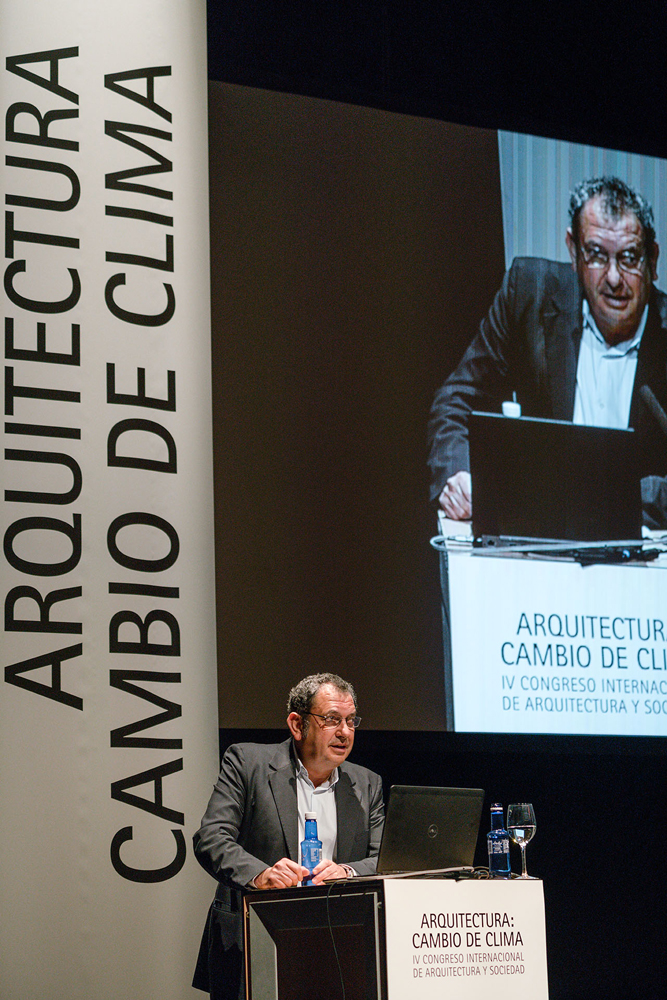 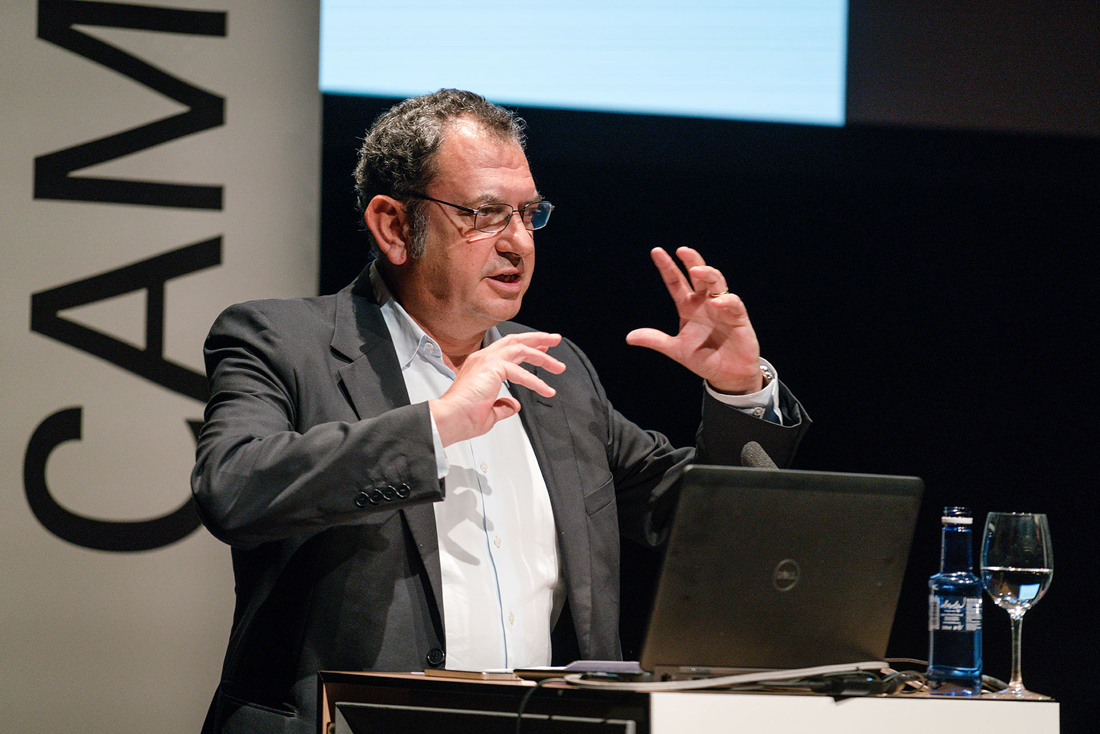 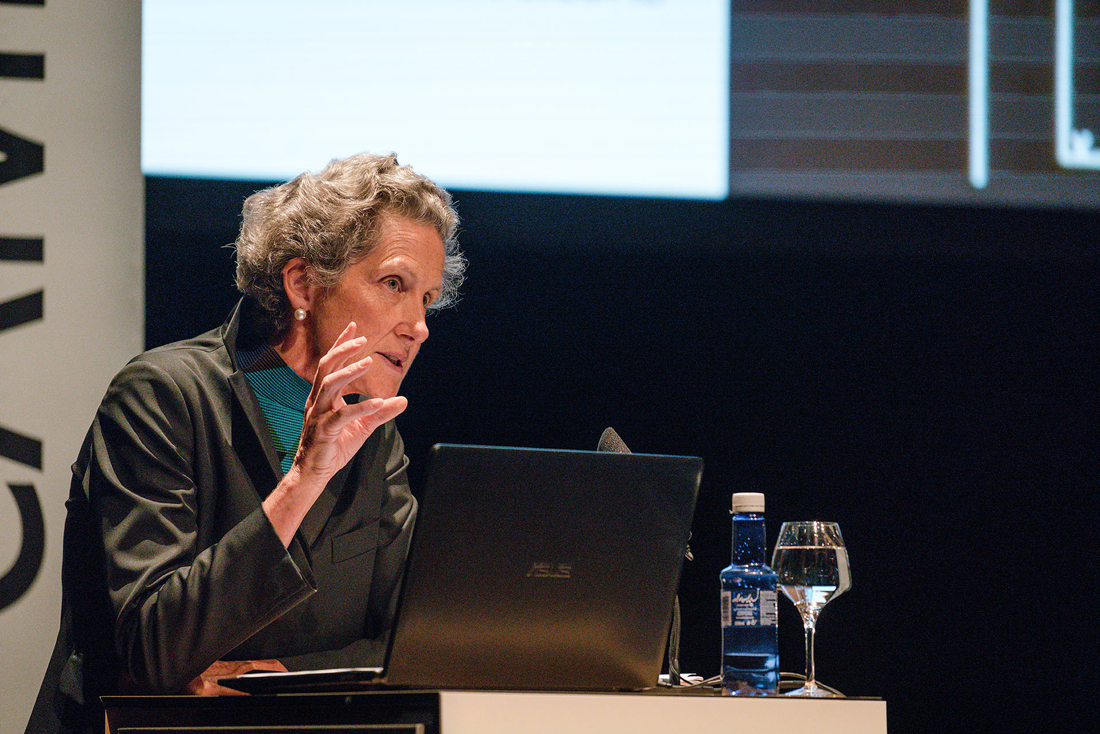 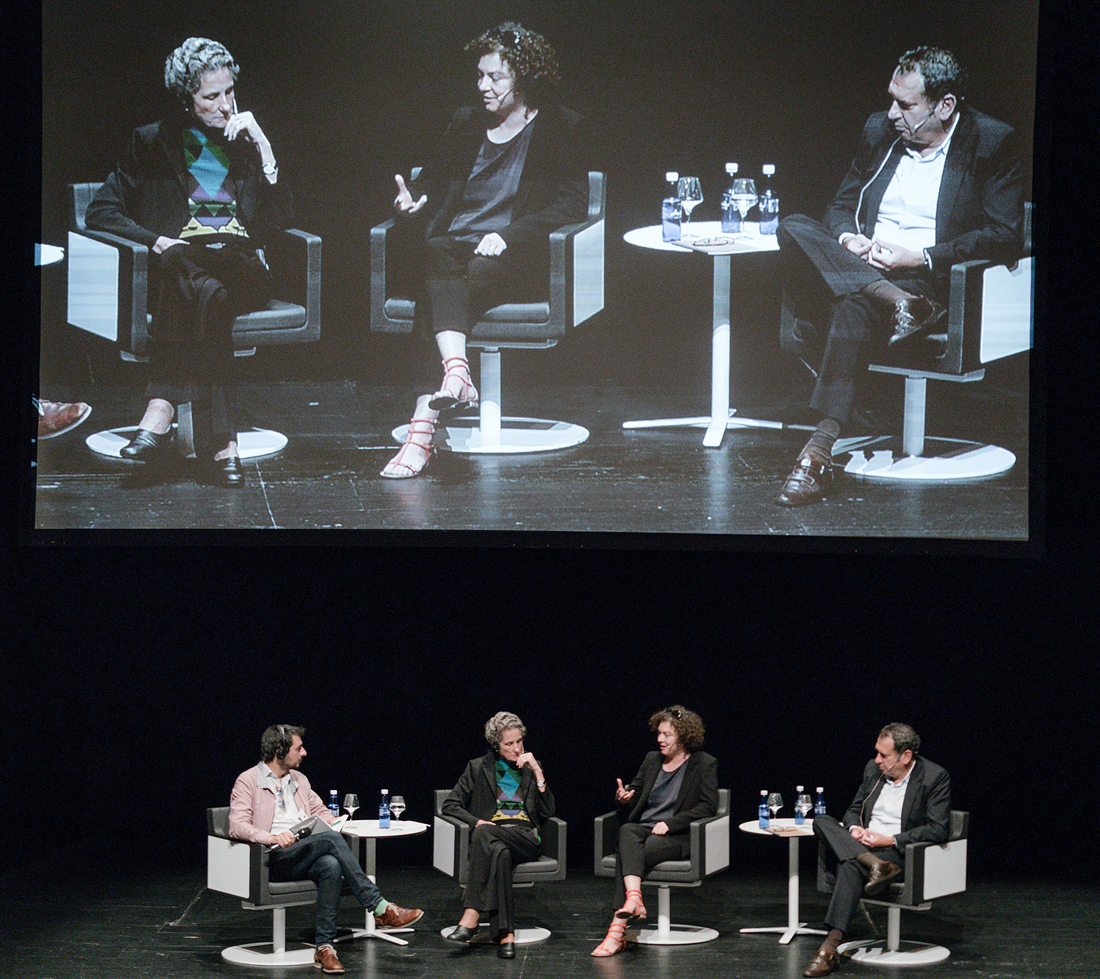 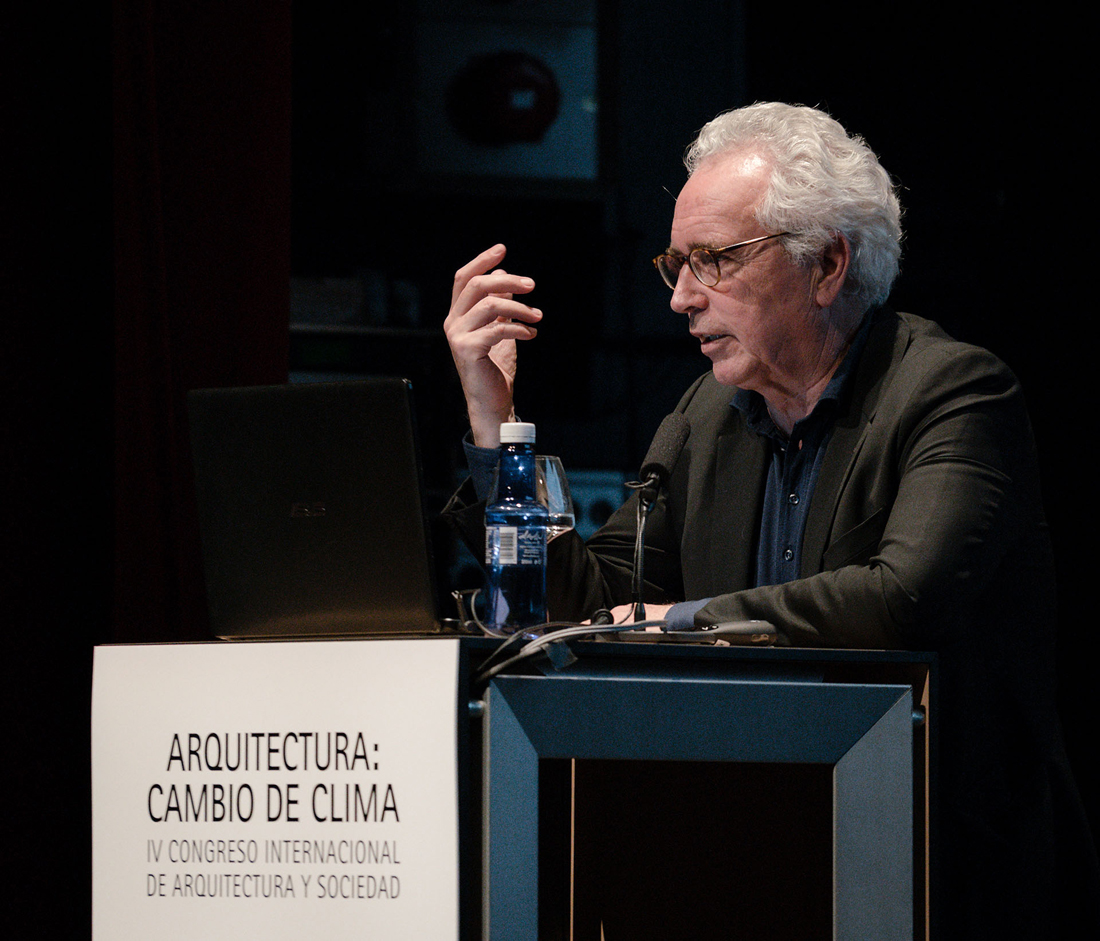 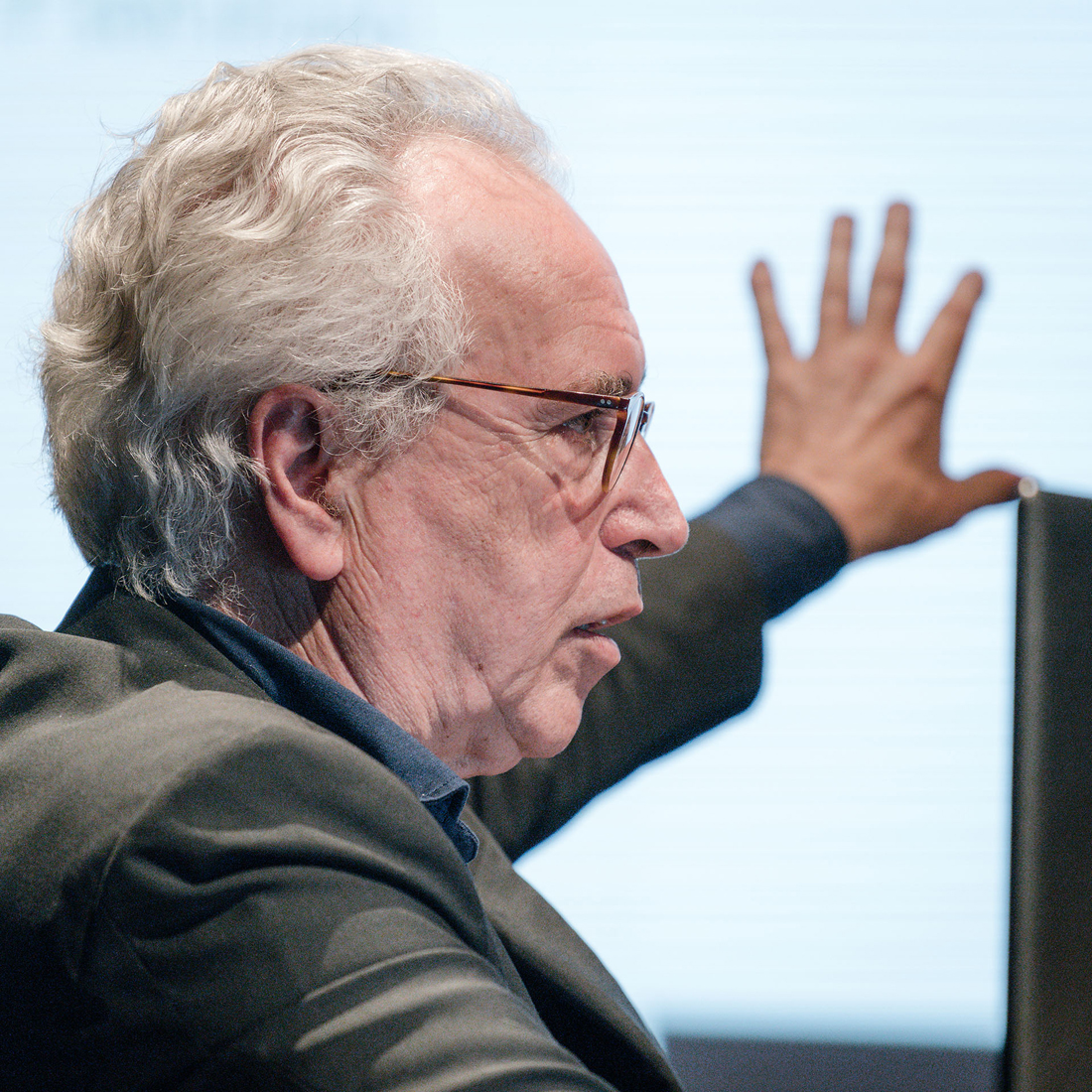 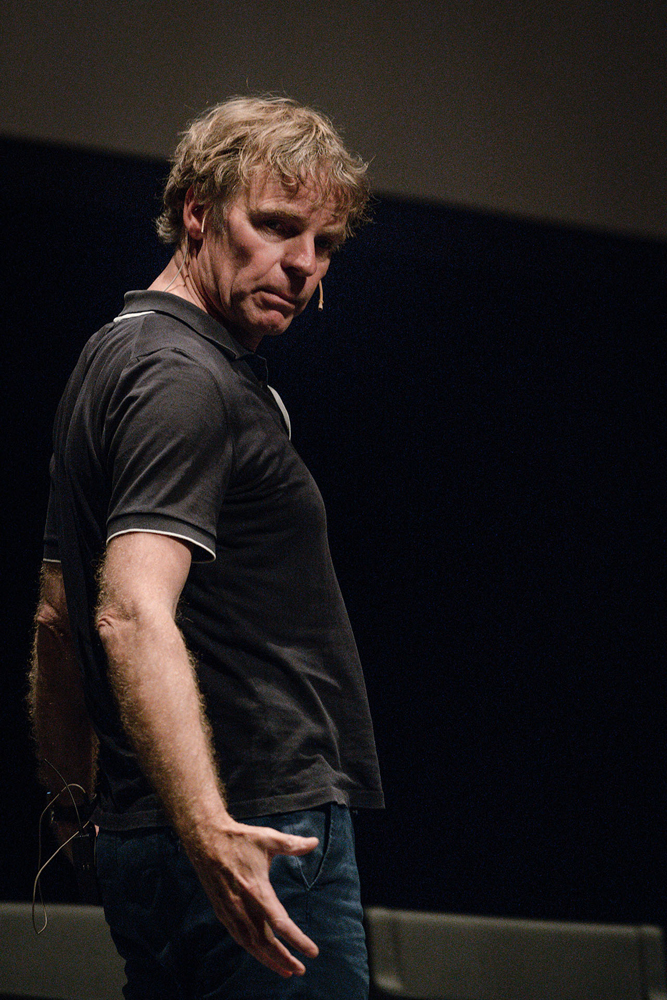 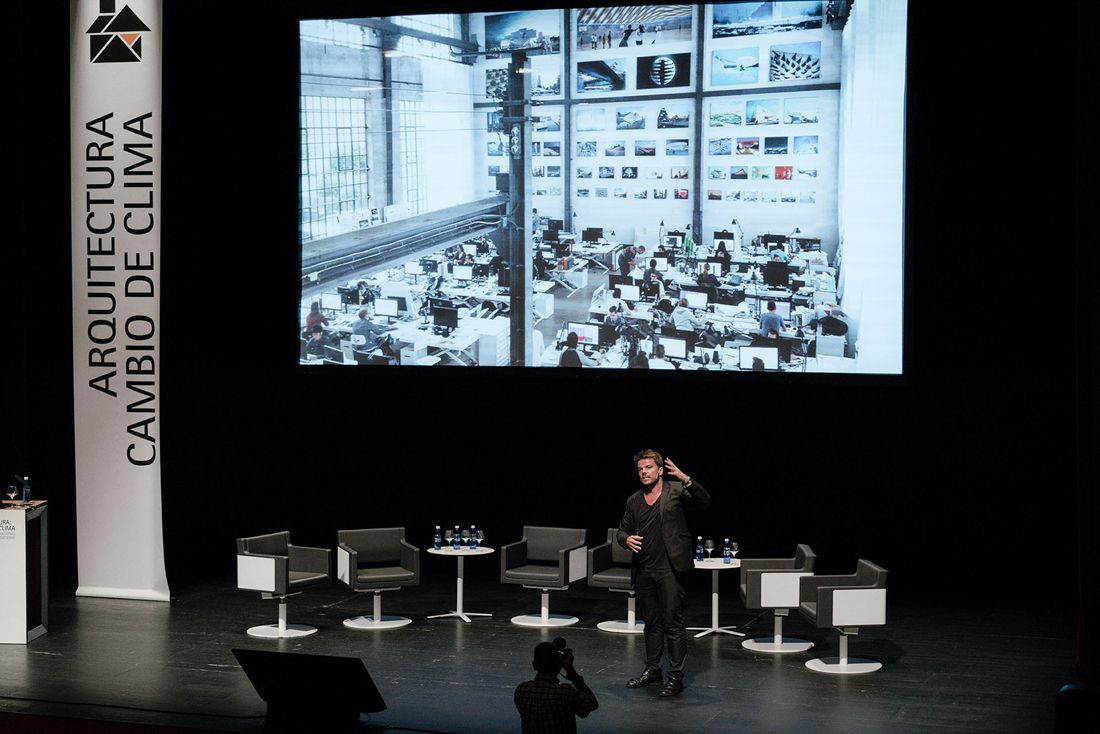 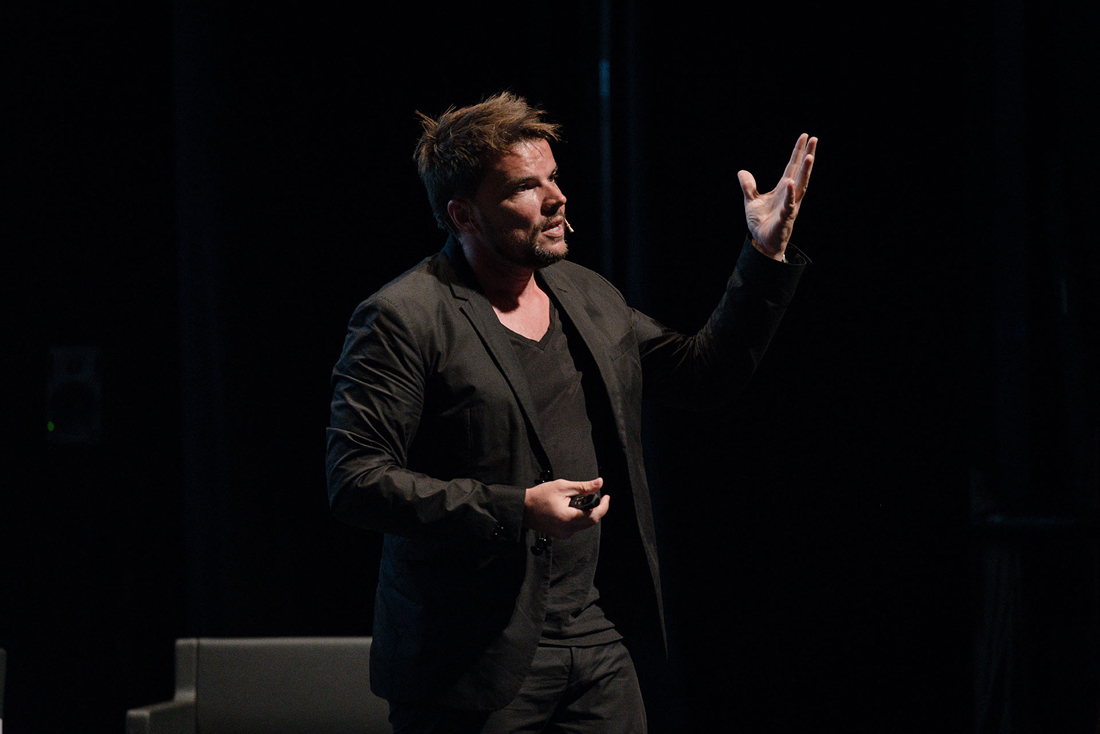 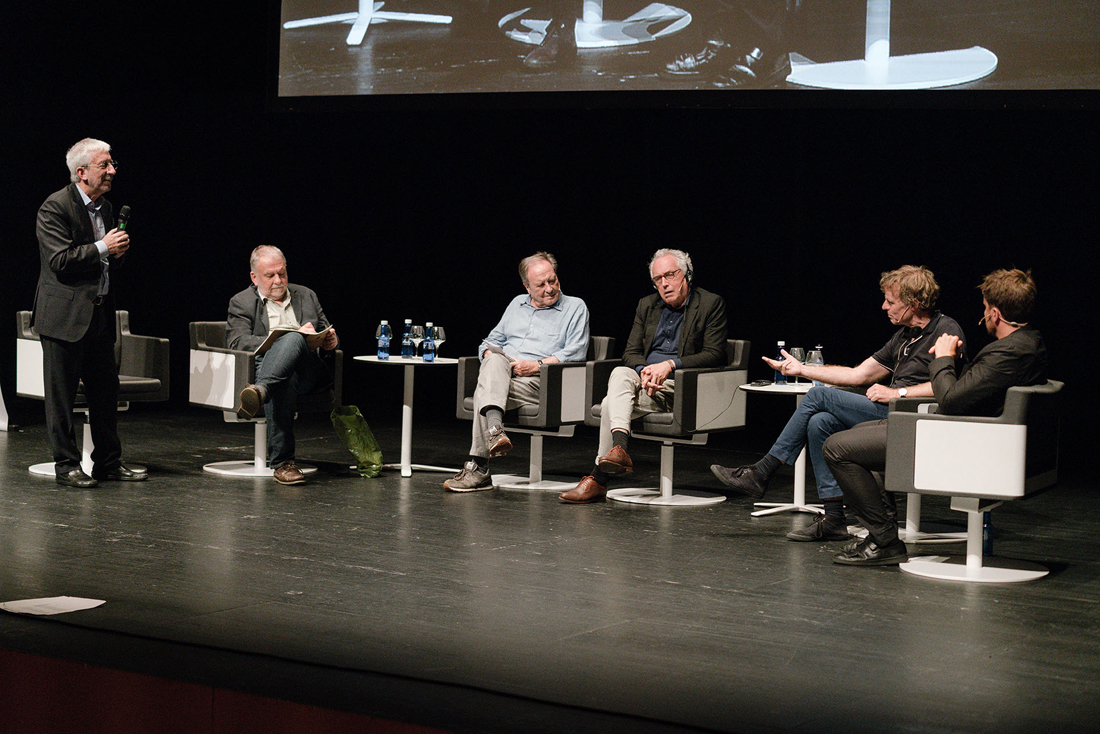 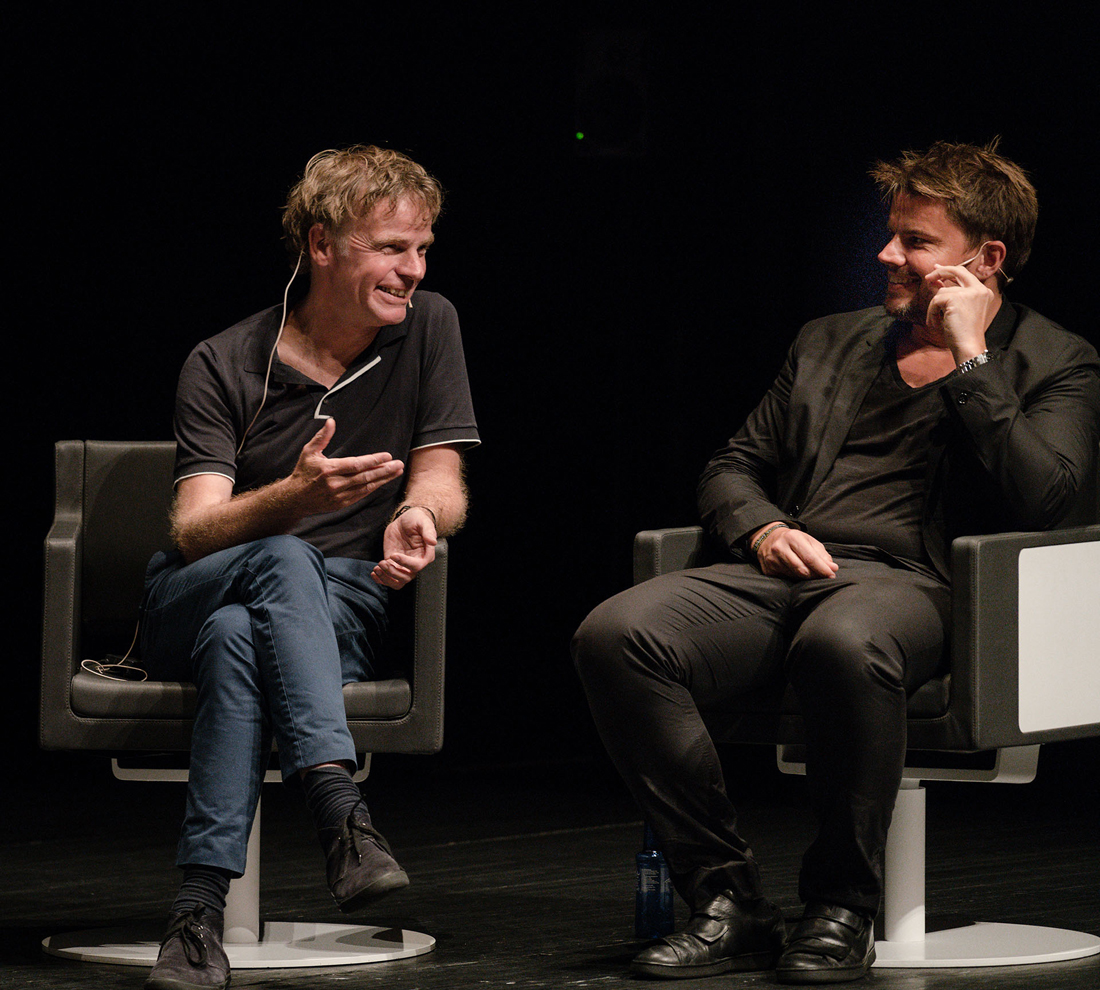 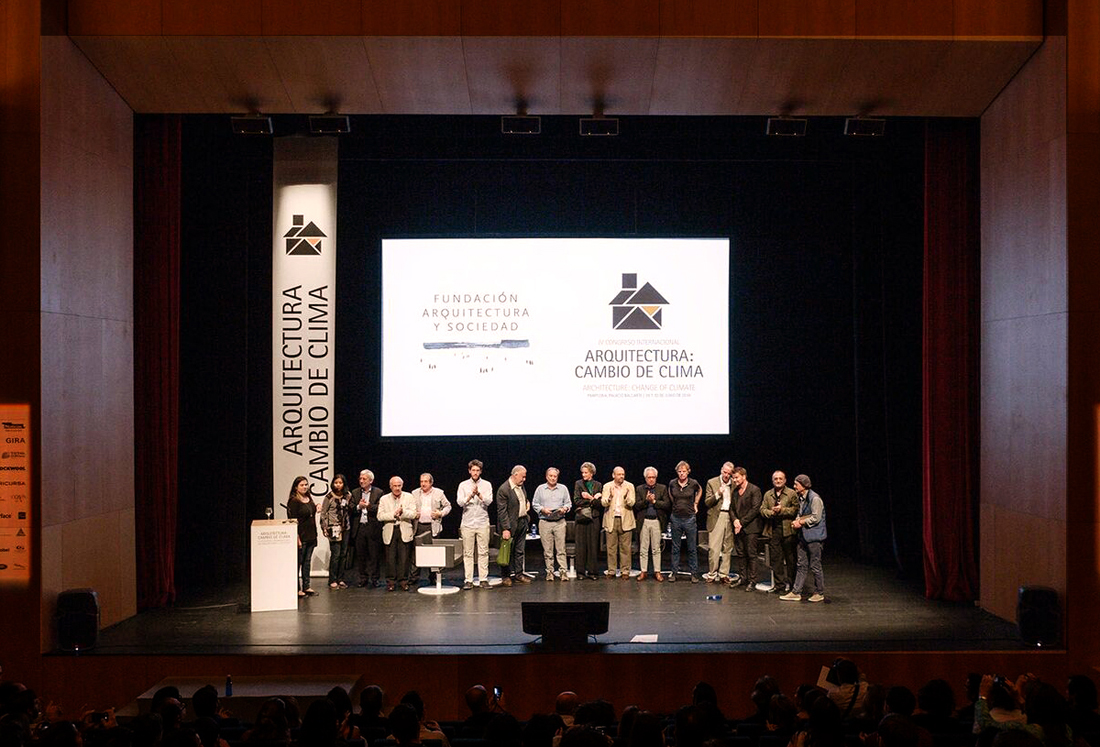