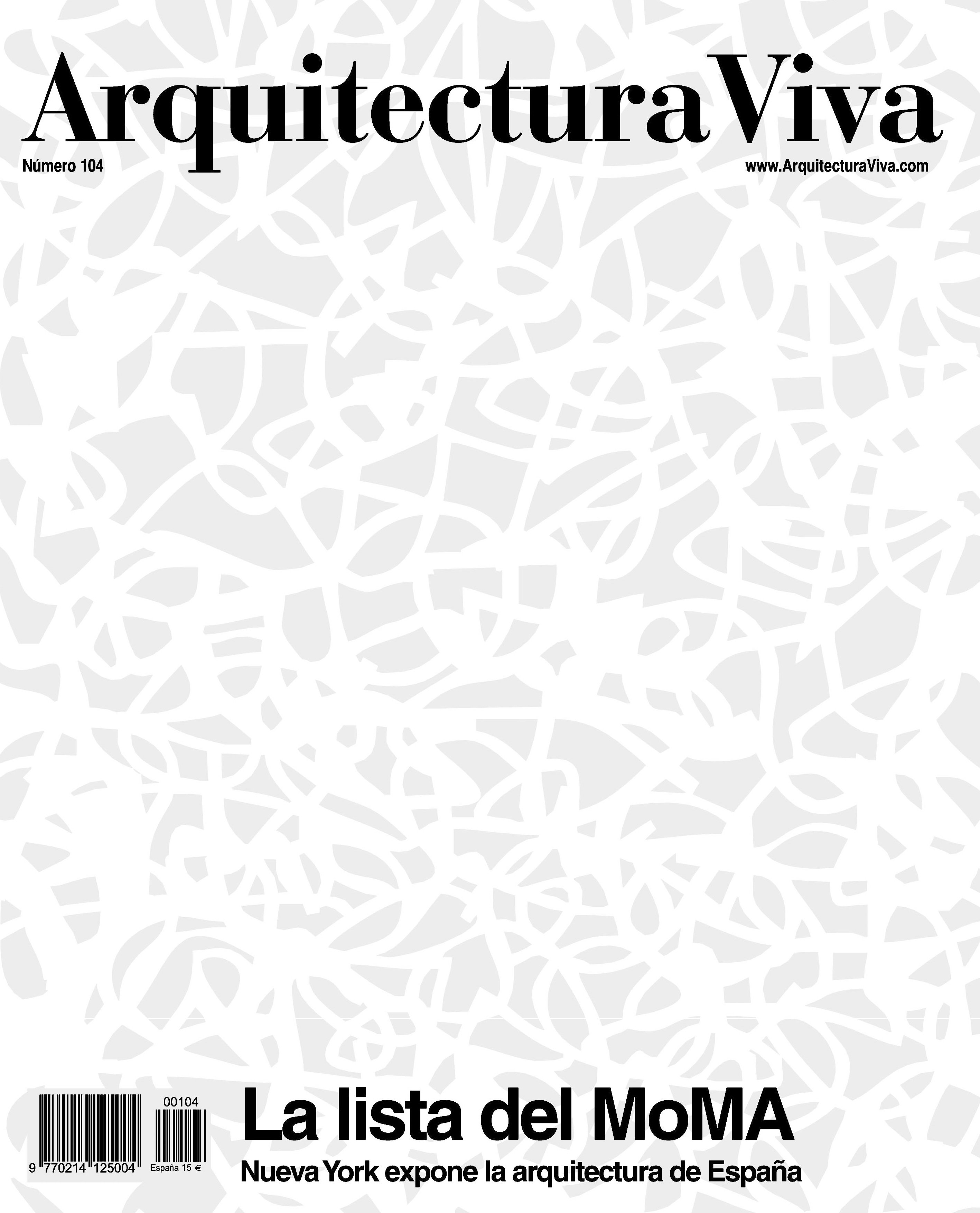 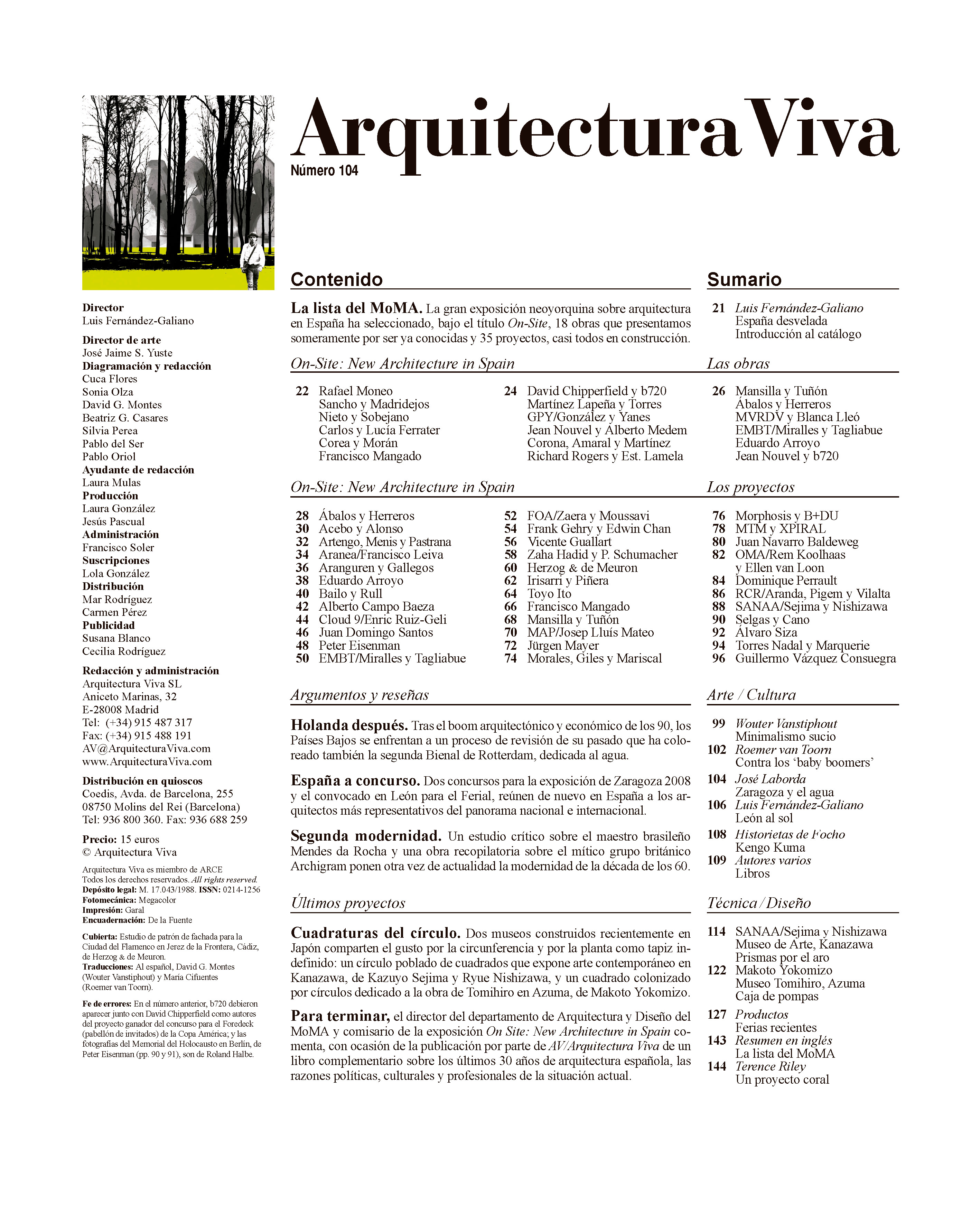 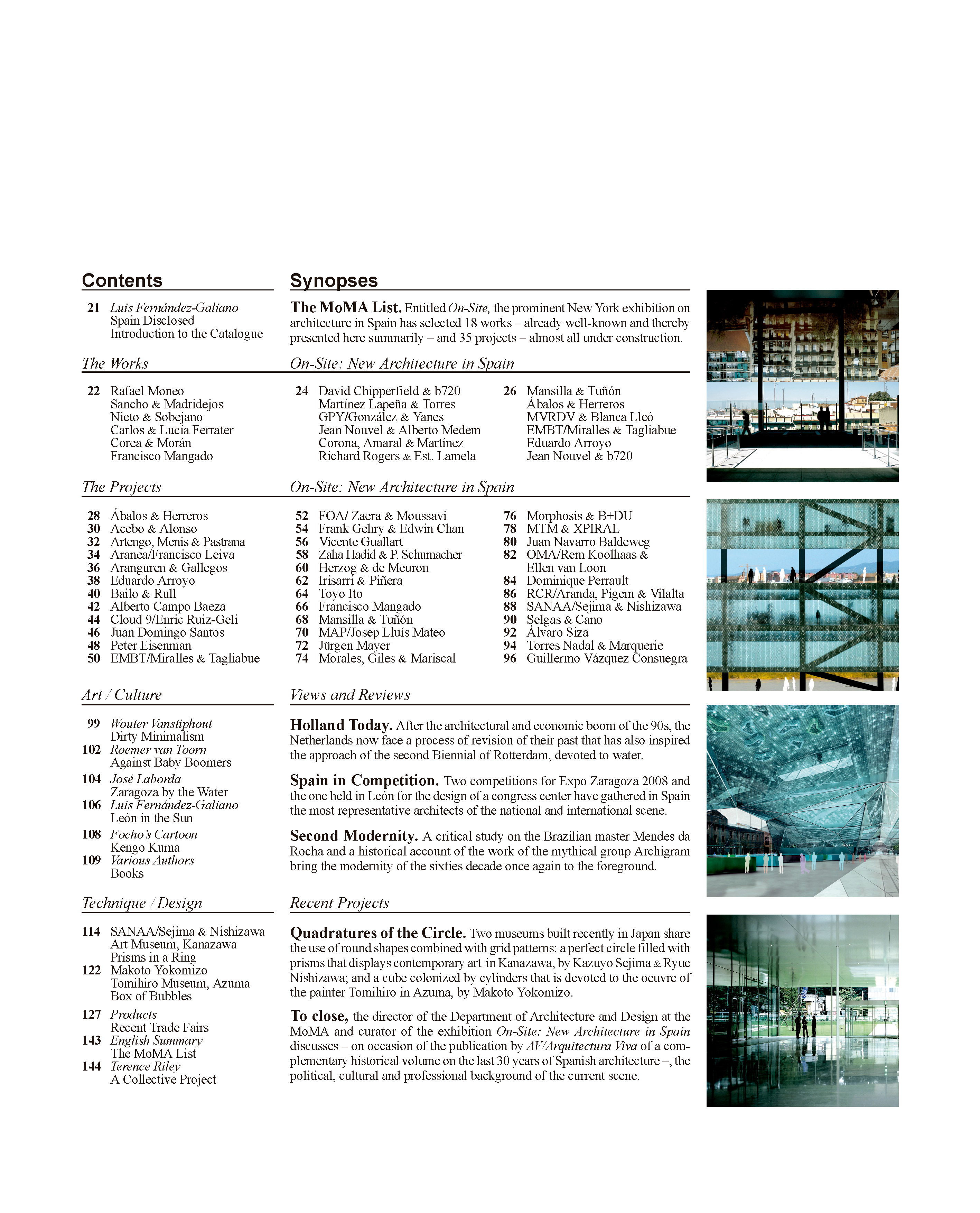 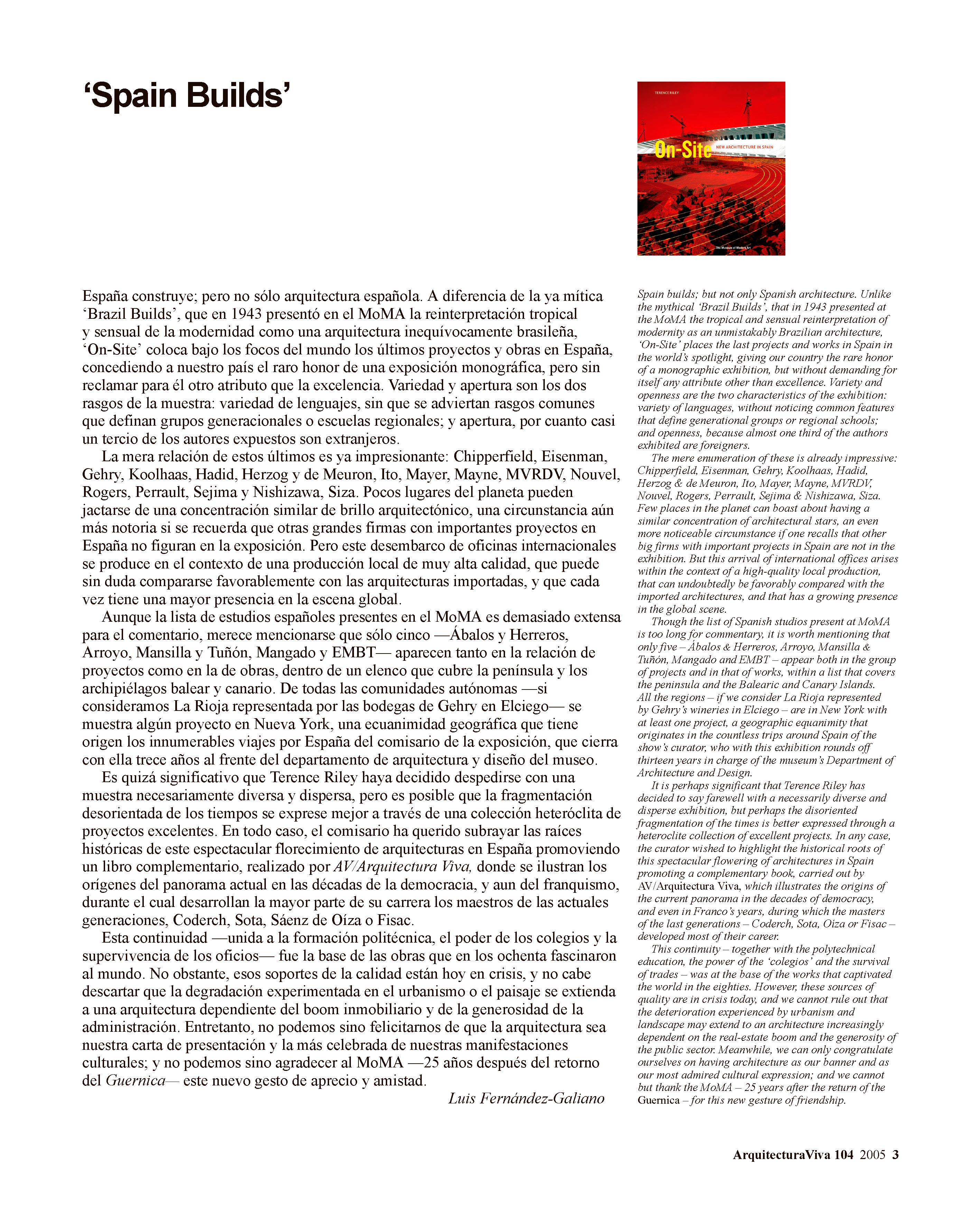 Museum of the Arts, A Coruña

Facade of the Town Hall, Manresa

House in a Cherry Orchard, Cájar

Herzog & de Meuron   Spain   Today there is an empty lot in the traditional, homogeneous and perfect space of the city, and on this empty lot there is a little forest growing naturally, as if by chance. What should be done? The empty space is with its trees very attractive, but

Álvaro Siza   Spain   The continuous urban transformation of the city center of Granada during the last decades has created a rich urban fabric where different styles and periods are superposed. Located in the northern end of a long urban block, the plot had three buildin

Holland after the SuperDutch Generation

Luis Fernández-Galiano   The people of León claim to bask in the sun. Against the frozen image of the Castilian-Leonese winter, the inhabitants of the city founded by the 7th Roman Legion remind the visitor that it is among the Spanish capitals that boast the most hours of s

Zaragoza by the Water

The Spanish Architecture of Democracy

The MoMA List. Entitled On-Site, the prominent New York exhibition on architecture in Spain has selected 18 works – already well-known and thereby presented here summarily – and 35 projects – almost all under construction.

Holland Today. After the architectural and economic boom of the 90s, the Netherlands now face a process of revision of their past that has also inspired the approach of the second Biennial of Rotterdam, devoted to water.

Spain in Competition. Two competitions for Expo Zaragoza 2008 and the one held in León for the design of a congress center have gathered in Spain the most representative architects of the national and international scene.José Laborda
Zaragoza by the Water
Luis Fernández-Galiano
León in the SunFocho’s Cartoon
Kengo Kuma
Various Authors
BooksSecond Modernity. A critical study on the Brazilian master Mendes da Rocha and a historical account of the work of the mythical group Archigram bring the modernity of the sixties decade once again to the foreground.Recent ProjectsQuadratures of the Circle. Two museums built recently in Japan share the use of round shapes combined with grid patterns: a perfect circle filled with prisms that displays contemporary art in Kanazawa, by Kazuyo Sejima & Ryue Nishizawa; and a cube colonized by cylinders that is devoted to the oeuvre of the painter Tomihiro in Azuma, by Makoto Yokomizo.Technique / Style SANAA/Sejima & Nishizawa
Art Museum, Kanazawa
Prisms in a Ring
Makoto Yokomizo
Tomihiro Museum, Azuma
Box of BubblesTo close, the director of the Department of Architecture and Design at the MoMA and curator of the exhibition On-Site: New Architecture in Spain discusses – on occasion of the publication by AV/Arquitectura Viva of a complementary historical volume on the last 30 years of Spanish architecture –, the political, cultural and professional background of the current scene.Products
Recent Trade Fairs
English Summary
The MoMA List
Terence Riley
A Collective Project

Spain builds; but not only Spanish architecture. Unlike the mythical ‘Brazil Builds’, that in 1943 presented at the MoMA the tropical and sensual reinterpretation of modernity as an unmistakably Brazilian architecture, ‘On-Site’ places the last projects and works in Spain in the world’s spotlight, giving our country the rare honor of a monographic exhibition, but without demanding for itself any attribute other than excellence. Variety and openness are the two characteristics of the exhibition: variety of languages, without noticing common features that define generational groups or regional schools; and openness, because almost one third of the authors exhibited are foreigners.

The mere enumeration of these is already impressive: Chipperfield, Eisenman, Gehry, Koolhaas, Hadid, Herzog & de Meuron, Ito, Mayer, Mayne, MVRDV, Nouvel, Rogers, Perrault, Sejima & Nishizawa, Siza. Few places in the planet can boast about having a similar concentration of architectural stars, an even more noticeable circumstance if one recalls that other big firms with important projects in Spain are not in the exhibition. But this arrival of international offices arises within the context of a high-quality local production, that can undoubtedly be favorably compared with the imported architectures, and that has a growing presence in the global scene.

Though the list of Spanish studios present at MoMA is too long for commentary, it is worth mentioning that only five – Ábalos & Herreros, Arroyo, Mansilla & Tuñón, Mangado and EMBT – appear both in the group of projects and in that of works, within a list that covers the peninsula and the Balearic and Canary Islands. All the regions – if we consider La Rioja represented by Gehry’s wineries in Elciego – are in New York with at least one project, a geographic equanimity that originates in the countless trips around Spain of the show´s curator, who with this exhibition rounds off thirteen years in charge of the museum’s Department of Architecture and Design.

It is perhaps significant that Terence Riley has decided to say farewell with a necessarily diverse and disperse exhibition, but perhaps the disoriented fragmentation of the times is better expressed through a heteroclite collection of excellent projects. In any case, the curator wished to highlight the historical roots of this spectacular flowering of architectures in Spain promoting a complementary book, carried out by AV/Arquitectura Viva, which illustrates the origins of the current panorama in the decades of democracy, and even of Franco’s years, during which the masters of the current generations – Coderch, Sota, Oíza or Fisac – developed most of their career.

This continuity – together with the polytechnic education, the power of the ‘colegios’ and the survival of trades – was at the base of the works that captivated the world in the eighties. However, these sources of quality are in crisis today, and we cannot rule out that the deterioration experienced by urbanism and landscape may extend to an architecture increasingly dependent on the real-estate boom and the generosity of the public sector. Meanwhile, we can only congratulate ourselves on having architecture as our banner and as our most admired cultural expression; and we cannot but thank the MoMA – 25 years after the return of the Guernica – for this new gesture of friendship.