The macrocompetition of the new Library of Mexico, flagship of the presidency of Fox, chose Kalach as winner followed by Moss and Chipperfield.

If Borges made the library and the labyrinth in-separable and Octavio Paz coined the image of a Mexico self-withdrawn in a labyrinth of solitude, it seems inevitable that the new Library of Mexico should choose its author through a labyrinthian competition in which almost all the participants and many of the juries would lose their way. Already in the first phase – concluded late in June, and which judged the 592 contestants on the basis of CV’s and an idea drafted in 300 words and two A3 pages –the competition disconcertingly eliminated most of the main figures who had been urged to participate. Peter Eisenman from New York, Rem Koolhaas and MVRDV from the Netherlands, Herzog & de Meuron from Switzerland, Dominique Perrault from France, Coop Himmelblau from Austria, and Kengo Kuma from Japan were some of the international names who did not make it through that first cut. Neither did numerous Spaniards of the likes of Carlos Ferrater, Guillermo Vázquez Consuegra, Ábalos & Herreros, and Mansilla & Tuñón. The second phase, resolved early in October after a hearing of the presentations of seven finalists (the Mexicans Broid, Tello, and Kalach, the Brazilian Vigliecca, the Californian Moss, the British Chipperfield, and the Catalan Mateo), made a paradoxical winner of a project that deliberately violated the visibility –and functionality – related objectives stipulated in the brief, segregating the urban environment, as it did, with forest-like curtains of tropical foliage, and conceiving the library as an interminable nave from whose structurally quite implausible roof the book-shelves hang like bunches of fruit.

The site chosen for what will be the center of the national network of public libraries is, appropriately, a transport junction and a node of the electrical network. The future Library of Mexico (named after José Vasconcelos, in memory of the intellectual and politician who reformed public education at the dawn of the Mexican Revolution) will maintain its current building in La Ciudadela for use by researchers, but its external projection and all functions concerning the public will be transferred to the new building. This will rise beside a railway sta-tion fallen into disuse that is to reopen as a transport interchange, and in front of a very old power plant that remains partly in operation, incorporating the obsolete buildings and engines into an industrial archaeology park within the library grounds, which will include large garden zones. The surrounding district is popular and heterogeneous, with commercial centers and office towers dotting the low-rise, dispersed residential tissue, halfway between the degradation that has cleared the city’s central zone of over a million people in the past quarter-century, and the administration-propelled urban regeneration processes that the library is part of, being both a cultural and urbanistic project intended at once to create “a country of readers” and boost the rehabilitation of the center.

The winning project by Alberto Kalach imagines what will be the center of the national network of public libraries as a nave from whose roof hang the bookshelves, and which is isolated by curtains of tropical foliage.

In this context, it is hard to understand how the winning proposal materializes both the priorities of the competition and the more general objectives of aperture, austerity, and reform outlined by President Fox. Enclosed by a scenographic botanical garden on cantilevered, projecting slopes, the library hides away from the city, coming across as a generic building that is indifferent to context, an ‘ark’run aground amongst primitive woodland that serves as a refuge for contemplative spirits like the philosophers of Raphael’s Stanze, significantly selected by the architect as a metaphorical represen-tation of the potential user. Over them, the titanic weight of wisdom manifests itself in the towers of volumes acrobatically hanging from the roof and obsessively multiplied along the vanishing atrium, halfway between the covered courtyard of the mall and the panoptic gallery of the jail but with the shops and cells replaced by a monotonous succession of identical and inflexible rooms, delimited as they are by the structural screens of concrete that are repeated in a way that extrudes the building’s linear form. Inspired perhaps by the utopian projects of visionary architects, but closer to the megastructures of the 1960s and that variant of neo-Aztec monumentalism that the PRI advocated as a style for national affirmation, Alberto Kalach’s urban jungle also displays that New Age sensibility that colors the covers of science fiction novels and the screens of computer games, giving an innocent and trivial representation of itself that tries to hide the fact that it is physically introverted, socially segregated, and technically extravagant: characteristics that will have to be corrected in the final project of one considered by many to be the most talented architect of Mexico’s new generation.

The two runners-up certainly differ much from one another, but either shows an attentiveness to the urban environment and a concern for popular accessibility that are not easy to find in the winning project. Both Eric Owen Moss and David Chipperfield colonize the site with sequences of volumes that present themselves categorically on the main street, opening spongily to the future hustle and bustle of the station and stretching parallel to the tracks all the way to the public park that the two architects propose for the area where the grounds come in con-tact with the power plant. The project of the Californian spreads a tapestry perforated by irregular courtyards that efficiently blends into the grain and texture of the city, painstakingly weaving a mesh of circulations and uses that holds together the building’s intricate program and ties its itineraries to that of the station’s commuters, creating a varied and occasionally redundant scheme crowned with a warped piece over the front plaza, manifesting the access and shaping the emblematic profile of the library with an immobile sandstone wave. And the project of the Brit uses seismic exigencies to fragment the building’s 200 meters into an elegant succession of cubes perforated by courtyards that interlock along the tree-lined avenue and the pond that lead from the front square to the rear park, in a synthesis between the monumentality befitting a grand institutional building and the affability required to make it inviting to the public, poles reconciled here through facades of artificial stone and textured glass that join geometric rigor and random composition to suggest a reticent solemnity capable of translating intuitions of Kahn, Barragán or Moneo into contemporary language. 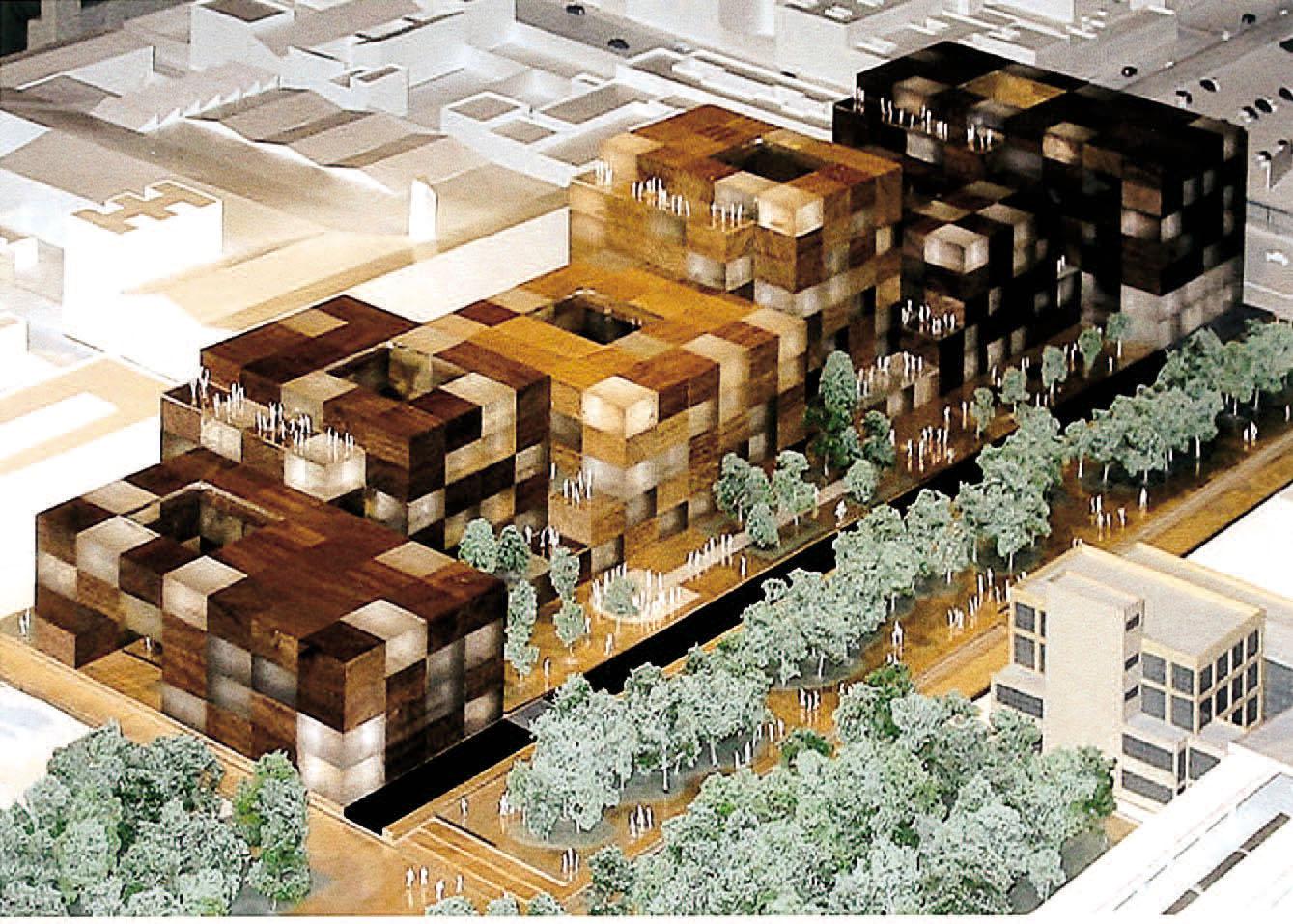 David Chipperfield, who came out third, fragments the 200 meters of his building in a series of cubes perforated by courtyards and interlocked along a tree-lined avenue, opening the institution to the city.

Finally wrapping up without any of the three prized proposals obtaining a majority of the votes, in a jury composed of five Mexicans, four from the US, the Japanese Shigeru Ban, and this writer as the only European, the competition was promoted with well-intentioned enthusiasm by the charismatic Sari Bermúdez, president of Conaculta (the Mexican equivalent of the Culture Ministry), and it has been the first international one to be held in Mexico since that of the Palace of Legislative Power in 1896. The result, interpreted by the local press as the triumph of a Mexican against the world, is perhaps as much the consequence of its peculiar process as an illustration of the larger mazes of Mexican politics, where Fox’s reforms toward a more open society seem to be hopelessly strayed.

El País   Luis Fernández-Galiano   The 20th century ended in Berlin, but the 21st began in New York. The cold war between ideologies came to a close with the coming down of the wall, and the hot war between civilizations broke out with the collapsing of the two towers. Five years afte

Luis Fernández-Galiano   Born into a well-off family of non-practicing Jews, young Peter only became conscious of his origins when the upheaval of the United States’ entry into the war stoked the flames of antisemitism. With both sides of the family coming from the eastern a

Luis Fernández-Galiano   The Iberian Peninsula is our common home. United by geography and divided by history, Spain and Portugal count three decades of democracy and two in the EU entwining their political paths, linking their economic structures and entangling their social