Architecture as Signs and Systems For a Mannerist Time 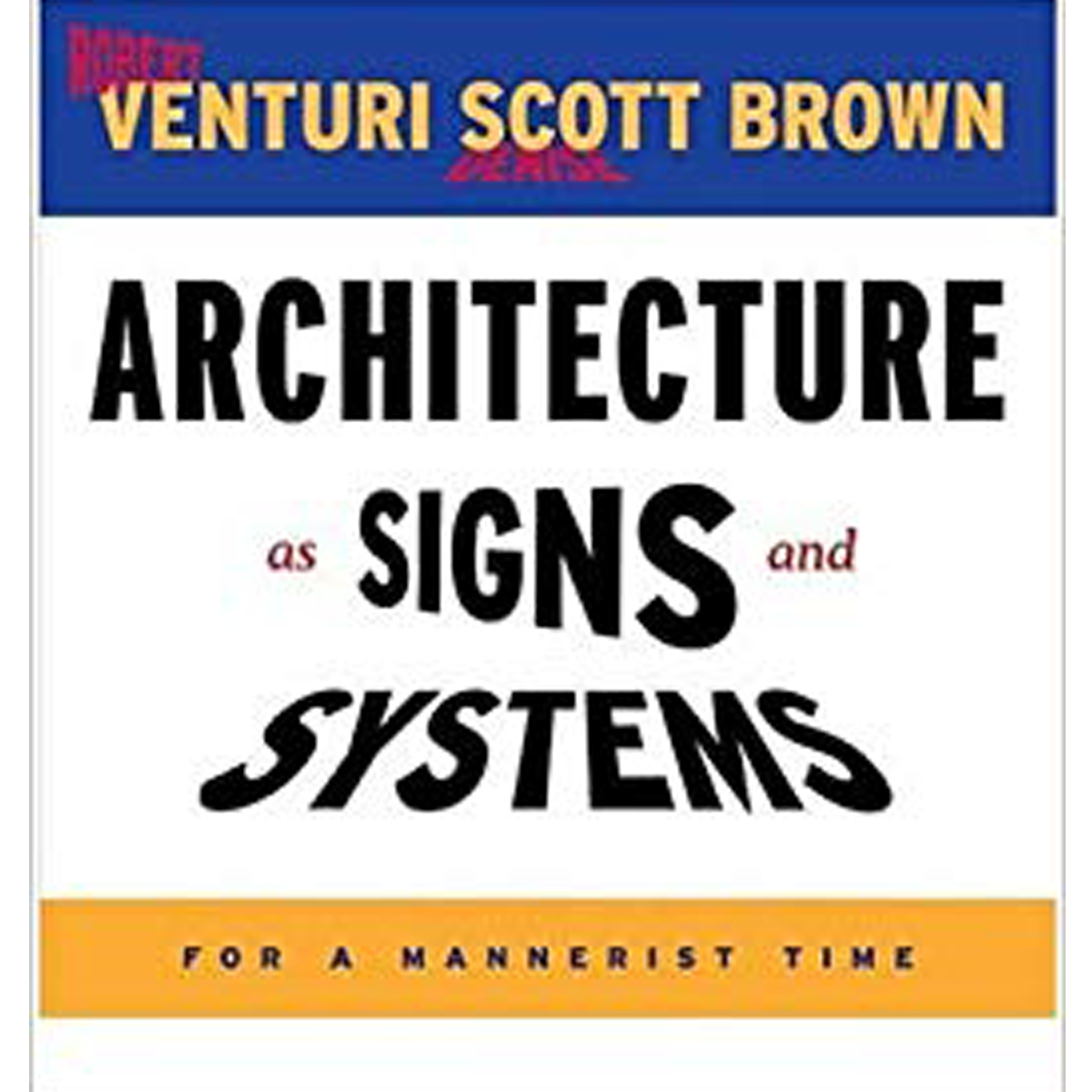 The last texts by Moneo, Eisenman, Koolhaas or Venturi & Scott Brown map the ideas supporting a discipline that is as convulse as its own times. 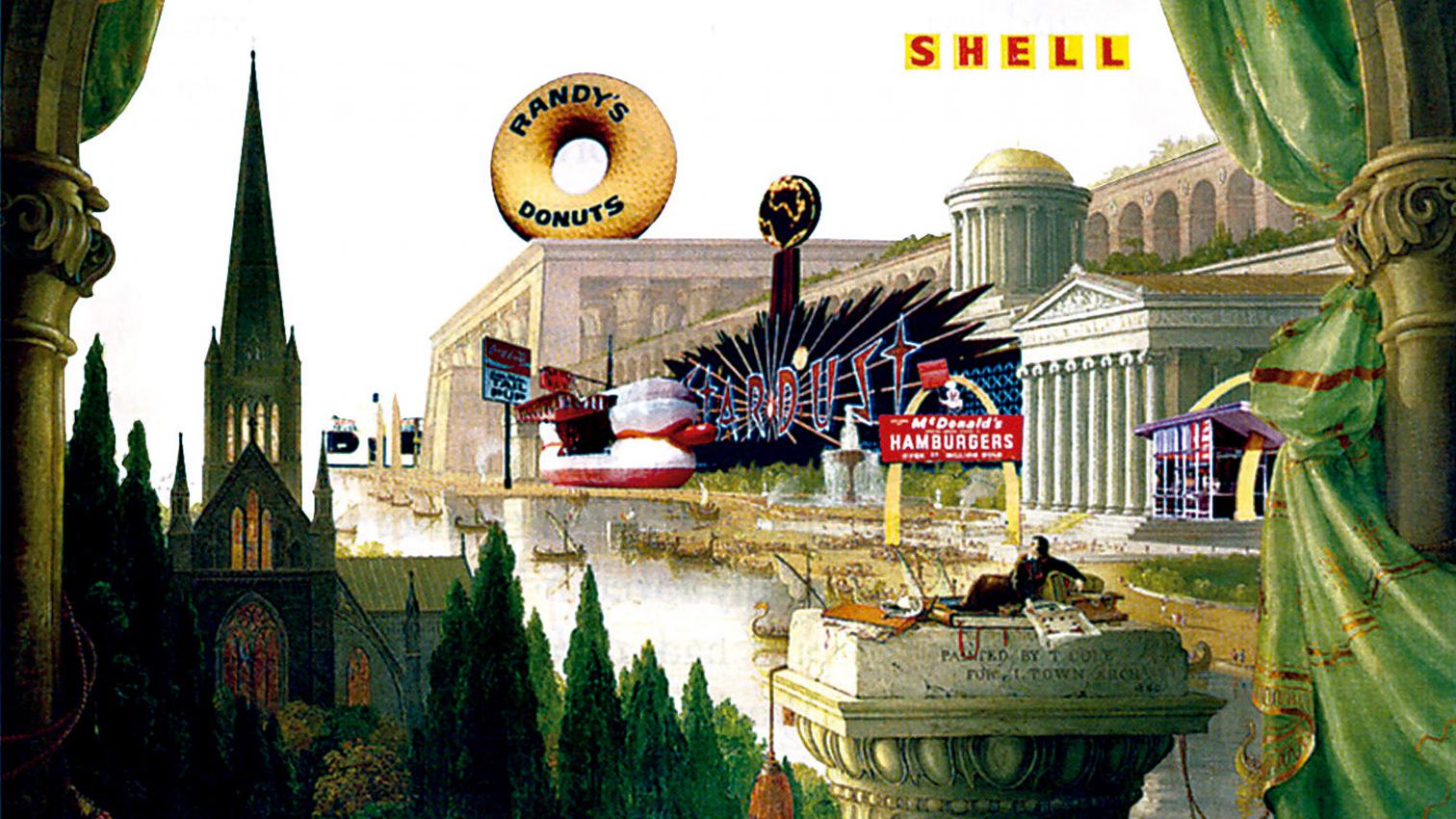 The earthquake of Lisbon brought on Pombal’s Baixa and the Jesuit decline. Once the tears and the streets dry up, the coasts devastated by the seaquake of Aceh will surface again with reconstructed huts for tattooed surfers and theme villages for sexual tourists, but it is unlikely that that catastrophe of the Indian Ocean will transfer power to Indonesia’s Islamic rebels or Sri Lanka’s Tamil terrorists. Our hedonist society easily metabolizes the fracture as part of the disorder of the times, and emergency architecture is integrated into the ecosystem of disaster as a brief hiatus between two phases of the commercial colonization of consumer territory. Confronted with images of the tsunami, Peter Eisenman brings up scenes of Houellebecq’s Platform, and Rem Koolhaas may have felt himself transported to the landscapes of his childhood in Southeast Asia, but both suspect that those artificial edens will reappear with the figurative populism canonized in Las Vegas by Robert Venturi and Denise Scott Brown, rather than with the shaken forms of the former or the broken volumes of the latter. Architecture tries to understand its times in order to take part in it, whether by expressing its ruptures or by attempting repair. Thus does theory – critical or narcotic, explicit or hidden – guide the drawing hand of architects. 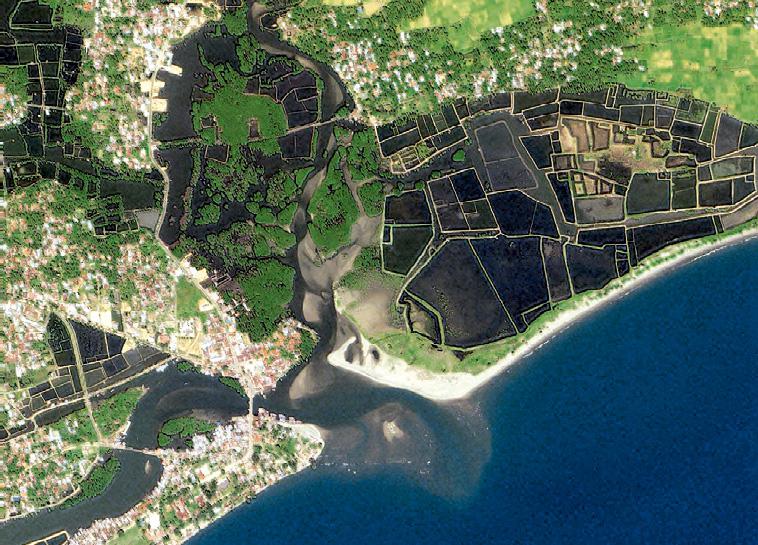 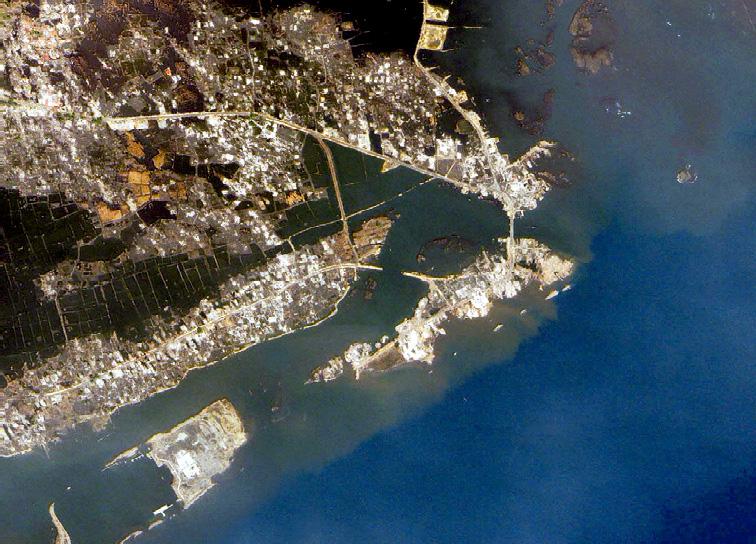 Coastlines of the island of Sumatra in Indonesia and of Thailand, before and after the tsunami.

The three mentioned above are particularly current in the publishing world: Yale has just released a selection of Eisenman’s writings between 1963 and 1988, Gustavo Gili has produced a Spanish translation of Koolhaas’ mythical Delirious New York of 1978, and Harvard offers Venturi & Scott Brown’s latest book, based on lectures the couple gave there in 2003. Moreover, with the late Aldo Rossi, they are the four selected by Rafael Moneo to illustrate ‘theoretical anxiety’ in contemporary architecture, in a recently printed volume that has its origins in lessons Moneo himself taught at Harvard during the school years 1992-93 and 1993-94. Published by Actar using the transcription of the Spanish versions of the classes, delivered in Madrid’s Circle of Fine Arts in 1995, along with the very same slides projected then, Moneo’s long-awaited tome also discusses the ‘design strategy’ of four other architects chosen for the degree of formal and artistic research contained in their work (Herzog & de Meuron, Frank Gehry, Álvaro Siza, and the deceased James Stirling). The resulting series is then an efficient pedagogical introduction to the architectural panorama of the past decades. 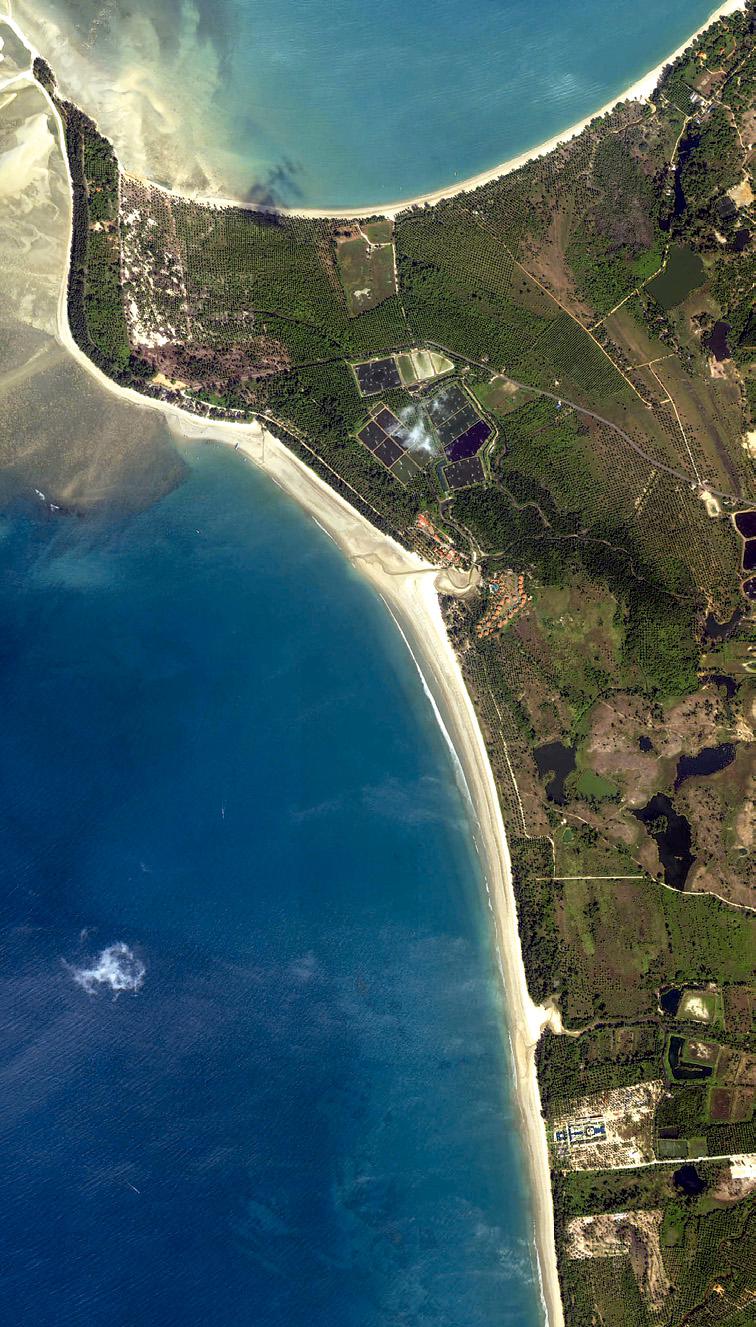 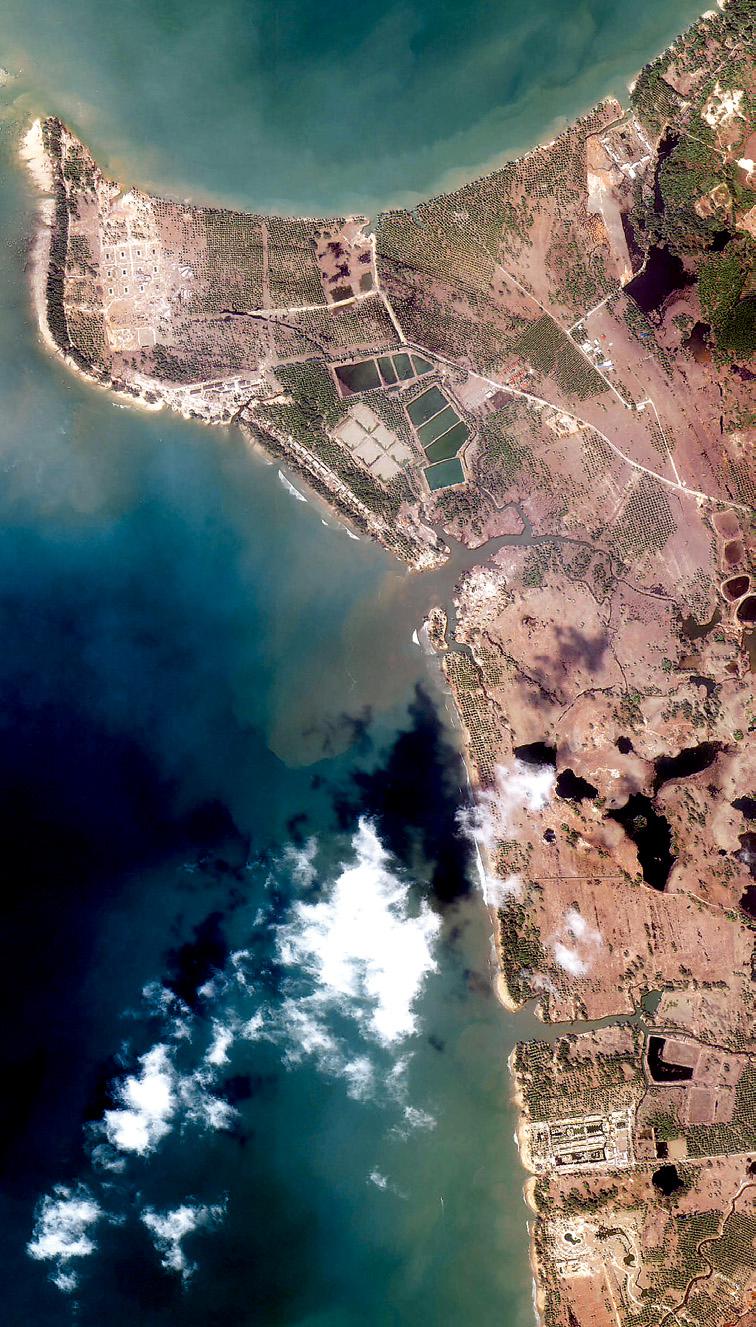 Free of jargon, always intelligent in the interpretation of the work of colleagues, occasionally abrasive in impeccably reasoned censures, the book is a testimony of Moneo’s mastery as a professor and a critic. More suggestive than his own history and theory writings (some of which were compiled in Italian by Daniele Vitale, in a pocketbook of Umberto Allemandi), the eight lectures are a model of disciplinary curiosity and intellectual generosity: not many designers devote so much attention and analytical effort to the work of contemporaries. Over and above anecdotal discrepancies (one cannot, for example, easily take Stirling’s last work as indicator of a change of course and ignore the role played in its design by Walter Nägeli), this group portrait by an insider deserves the success of Vasari, and perhaps also its long publishing life. 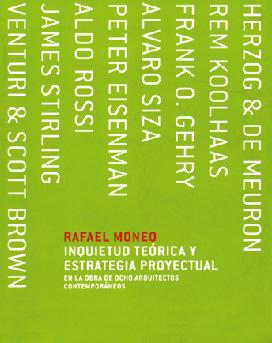 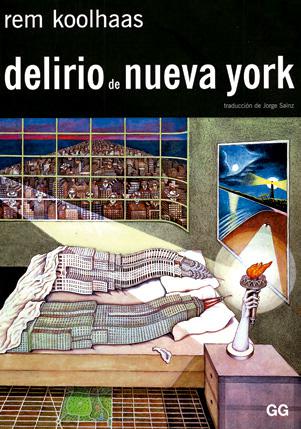 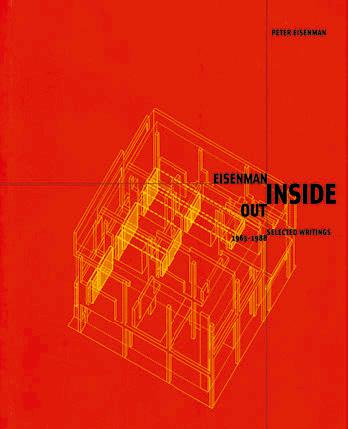 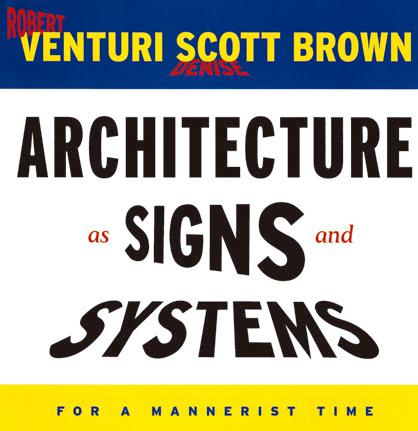 A less easy read, Eisenman Inside Out sums up the first 25 years of the New York architect’s theoretical production in 19 texts connected by the thread of a preoccupation with form and a determination to formulate what he calls “a discourse on the interiority of architecture”, an essentialist expression that more or less refers to the deep structures that condition the composition of buildings and, in the end, their external appearance. Abounding in references to the Italian Renaissance masters that his teacher Colin Rowe familiarized him with, namely Alberti, Palladio, and Scamozzi, the book presents articles on historic figures of the Modern Movement, such as Mies van der Rohe, Le Corbusier, and Terragni, but above all it deals with the author’s own contemporaries. Alison and Peter Smithson, James Stirling, Philip Johnson, Michael Graves, Aldo Rossi, and John Hejduk are subjects of specific texts, Robert Venturi is often quoted as a counterpoint, and both Rem Koolhaas and Frank Gehry are mentioned to stress their differences with the analytical method proposed. Exquisitely edited and meticulously illustrated, the volume is the best introduction to the thought of the one who has most tenaciously worked for the syntactic subversion of contemporary architecture, a testimony of whose persistent influence was recently made by Moneo on getting admitted into the Academy of Fine Arts. Titled On the concept of the arbitrary in architecture, Moneo’s acceptance lecture covers a wide historical panorama, spanning from the Greeks to Gehry, but deals with Eisenman more lengthily than any other architect, ancient or modern. 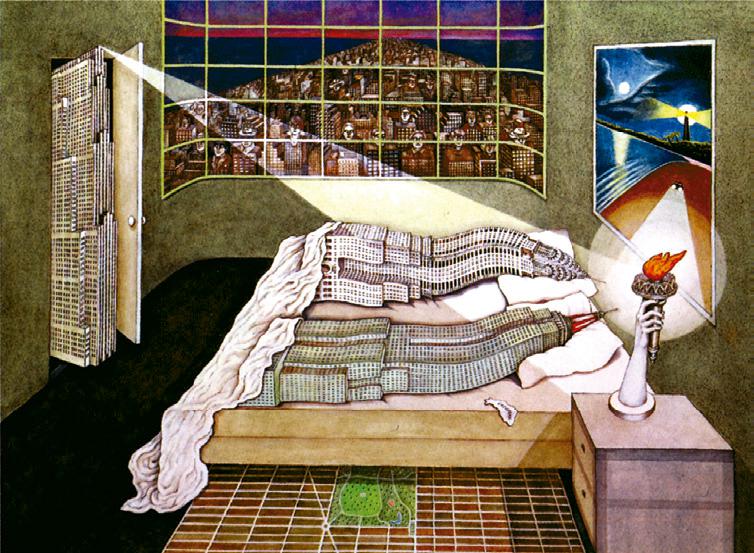 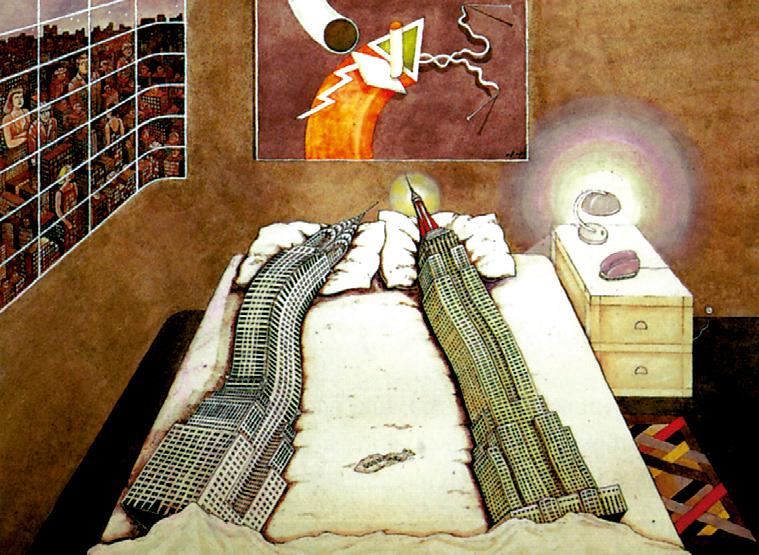 Rem Koolhaas wrote Delirious New York while residing in the city as a member of the IAUS (Institute for Architecture and Urban Studies), an effervescent hub of theoretical renewal spearheaded by Eisenman. Although that ‘retroactive manifesto’ for Manhattan as a paradigm of metropolitan congestion won immediate fame, it has taken 25 years for a Spanish version to come to pass. Finally we have it, expertly translated by Jorge Sainz, a must for anyone who has not read a work that Moneo considers to be key to an understanding of architecture of the past quarter-century, notwithstanding the author’s belonging to “an elite that has lost contact with the masses” as the Spanish master unexpectedly describes him. Incandescent in its dizzying, fragmented text, hypnotic in its fascinating sequence of historic images, Koolhaas’ amour fou for Manhattan is also a lucid reflection on the future of urbanism and the city that begins with accepting economics and technology as driving forces of a modernization process whose scenario and model is the metropolis. 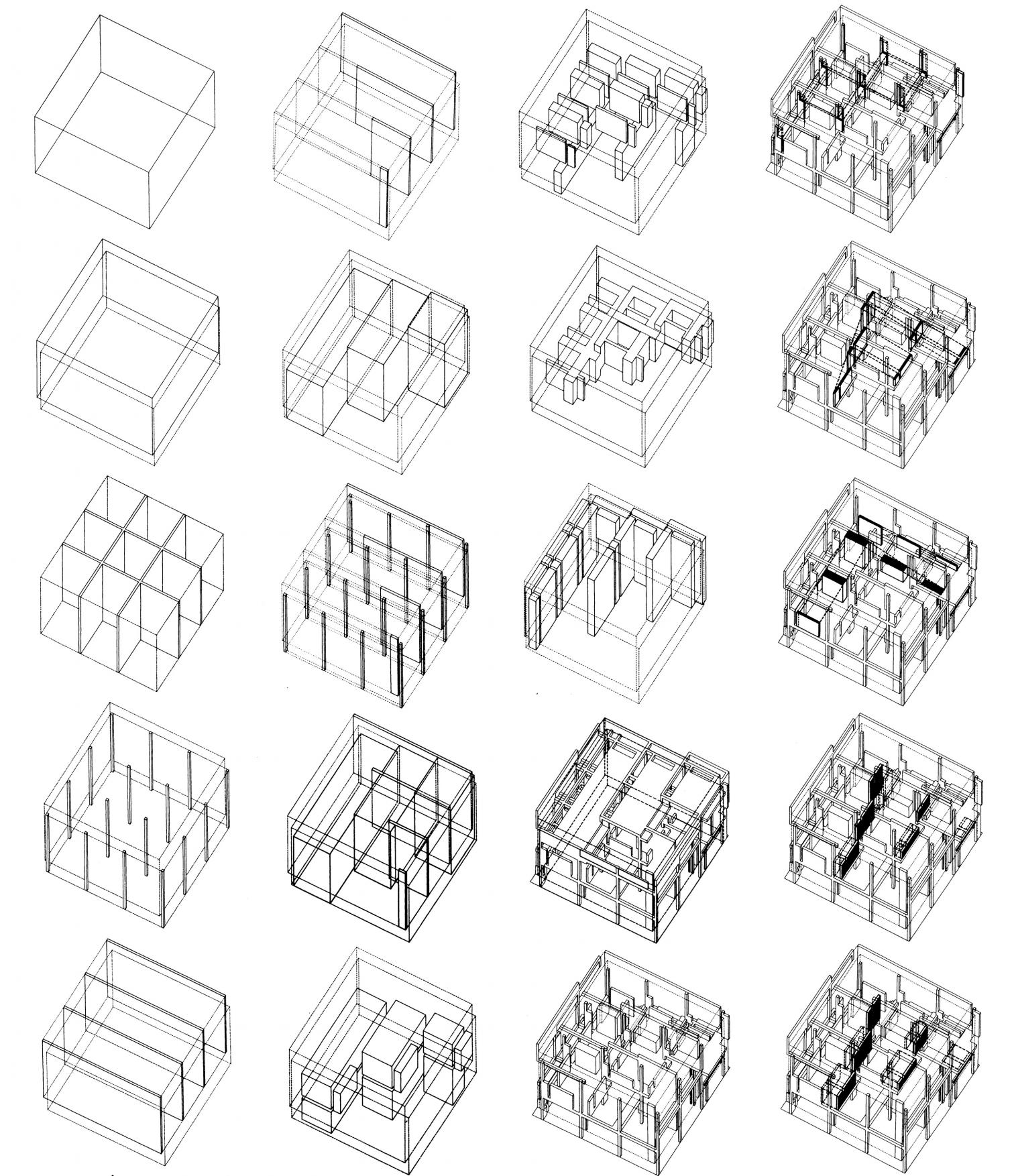 That invitation to learn from Manhattan was in a way a reply to Learning from Las Vegas, published in 1972 by Robert Venturi and Scott Brown (with Steven Izenour), specifically to its pop defense of commercial symbolism and suburban iconography. Three decades later, the couple returns with another manifesto of a book, Architecture as Signs and Systems, which is along the same line of the two works signed by Venturi alone: the very influential Complexity and Contradiction, his ‘gentle manifesto’ of 1966, and the less read Iconography and Electronics upon a Generic Architecture of 1996, a compilation of writings ranging from his thesis of 1950 to the ‘not so gentle manifesto’ of 1994. In the collection of texts gathered in their latest book, Venturi and Scott Brown champion a mannerist architecture as being the only architecture suitable to a multicultural society, and defend pluralism and pragmatism against aesthetic minimalism and the ideological purity of late modernity. Profusely illustrated and painstakingly orchestrated between the two authors (Venturi’s texts invite us to take architecture as a sign instead of as a space, while Scott Brown’s contributions urge us to learn from urbanism so as to interpret architecture as patterns and systems; hence the duality of the title), the work presents itself as a reflection of ‘a pair of loners’ with neither followers nor school, but both the narcissistic abundance of self-quotes and the pittance of references to their contemporaries are more reflective of the conceited isolation that followed their loss of popularity in the eighties, and which the temperate recovery of esteem in the dawn of the new century has not altered. 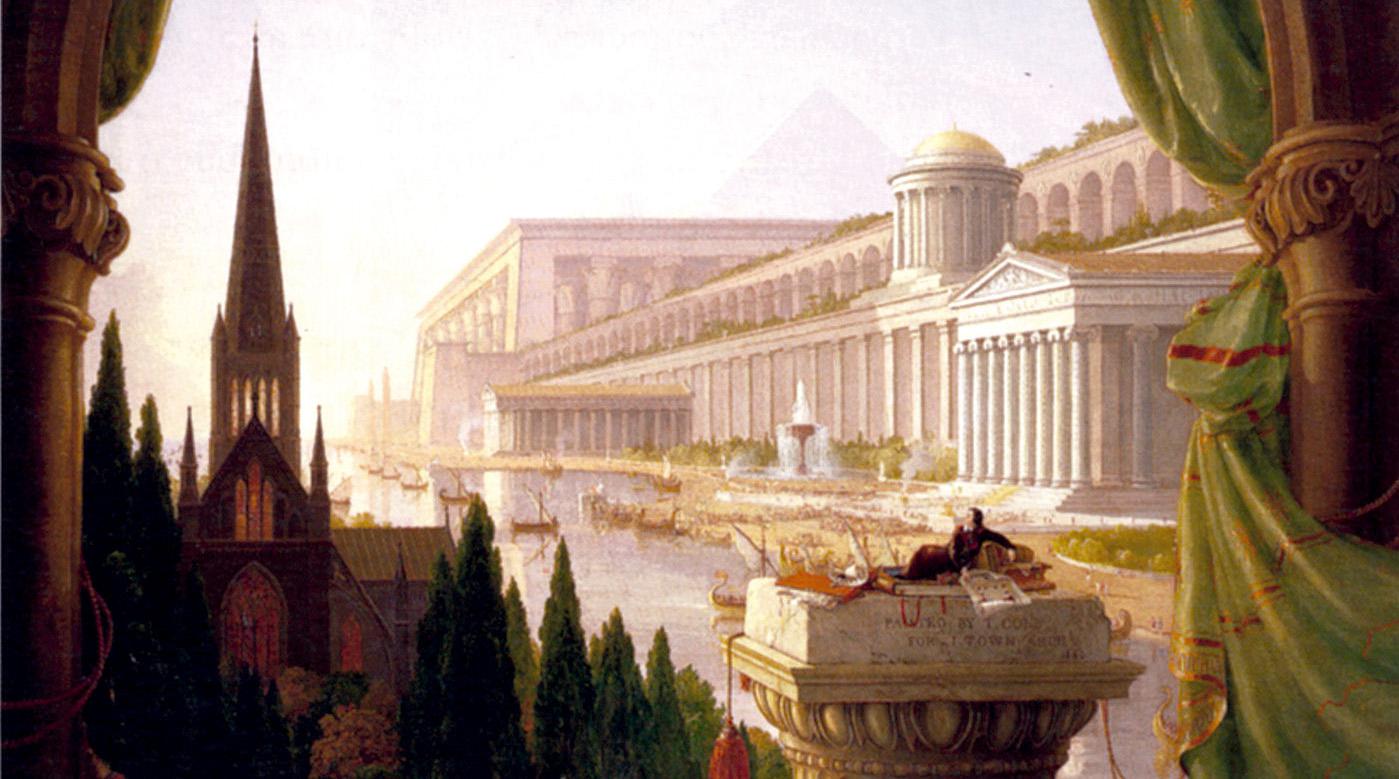 What good are all these theoretical anxieties when the earth shakes? We are not sure what we want of architecture – whether we want it to explain or console, represent or cure. Susan Sontag is no longer around to instruct us on the quake and its metaphors, but volcano-loving architects will do well to remember that exactly a year before the tsunami of Boxing Day, on 26 December 2003, a twelve-second tremor destroyed the fortress of Bam facing The Tartar Steppe. It also caused 37,000 Iranian deaths, but Dino Buzzati’s novel and Valerio Zurlini’s movie had framed our gaze in such a way that we only shed tears for adobe architecture. Venturi proposed his own version of The Architect’s Dream. It would be good to know which is ours.

Erik Gunnar Asplund   Sweden   During the long works of the cemetery, which began with the 1915 competition, Asplund had a lot of time to reevaluate the complexities of the religious commissions, where architecture acquires a special commitment. The woodland chapel would be his fi

Carme Pinós, An Exhibition in Madrid

The exhibition walks us through the oeuvre of Carme Pinós, divided into three sections: the bottom level laconically presents the eight works she completed with Miralles; the main floor showcases eighty projects developed on her own over three decade

Jean Pierre Dürig Philippe Rami   Switzerland   In spite of carrying a considerable number of flights – a result of its strategic position in the heart of Europe –, the Zürich-Kloten airport does not have a building plan able to face a series of functions in continuous growth and change. The heter