When he wrote that bit about man being a political animal, Aristotle could not have imagined that his thesis would be completed by Joseph Beuys, who said that what really defined man was his artist nature. This tangle between politics and art is the guiding thread of a solid, stimulating book on ‘artistic utopias of revolt’.

The author analyzes the ethical and utopian dimensions of the forms of community activism that share one same praxis: occupying urban space and transforming it through instruments belong to the art world. ‘Activist creativity’ is examined through case studies: the preliminary London experience of Claremont Road in 1993, where groups of squatters raised sculptures doubling as barricades; the 1995 performances of the Reclaim the Streets collective, which for a while annulled the conventional uses of London streets through a ‘guerrilla gardening’ that opened the way for ephemeral utopias; or the ‘Acampadasol’ mass momvement, which built an instantaneous city within the city in accordance with an assembly-based ‘urbanism’ of mixed symbolic content.

In all of them, utopia served as a discourse, and art as a language, which is not to say that the two dimensions can be separated. The merging of politics and aesthetics, understanding artistic manifestations as symbolic expressions of the desire to transform reality, is the main lure of a book that, on the other hand, does not hesitate to expose the contradictions of current artistic utopias of revolt; heirs, after all, of older cases of aestheticizing politics. 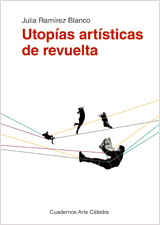 Landscaping adjustment of the walled enclave and chapel of Jorba Castle

Carles Enrich   Spain   The second phase of the masterplan to restore the area surrounding Jorba Castle began in 2019. The remains of this monument crown the Puig de la Guàrdia mountain, in the Catalonian comarca of Anoia. The excavation works uncovered a 60-square-meter 12

In the village of Rudrapur, located in the Dinajpur Disrtict of northern Bangladesh, the German architect Anna Heringer – in conjunction with Veronika Lang and the non-profit organization Dipshikha – recently completed a therapy center for people wit

As in drawings by the 16th-century anatomist Andreas Vesalius, with depictions of flayed human bodies flaunting all their inner organs and workings, the recently opened Roy and Diana Vagelos Education Center in New York City – Columbia University Med