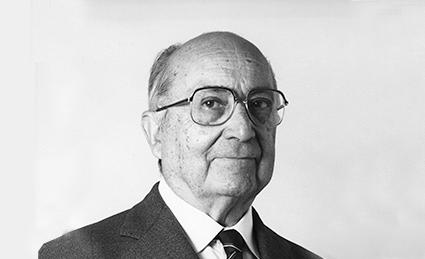 Father of two architect sons, Manuel and Ignasi de Solà-Morales i Rubiò – the latter prematurely deceased in 2001 –, the architect Manuel de Solà-Morales de Rosellò was born in Olot, Gerona, in 1910, and died on 18 December in Barcelona, the city where he studied and in which he developed from the postwar a significant activity in several fields. First as secretary and later as dean for ten years of the Architectural Association of Cataluña and Baleares, from which he promoted the modernization of Catalan architecture organizing lectures with guests such as Alvar Aalto or Bruno Zevi, and calling in 1958 the competition for the construction of the new headquarters of the Association in the Cathedral square. Also as a professor at the School of Architecture, where he became Building Construction chair in 1955, and which he directed between 1967 and 1969, aside from being deputy dean from 1972 and 1974. And finally as municipal architect of Barcelona, a position to which he devoted three decades, until 1976. The dwellings on Muntaner with Porvenir street (1964-1966) are the result of the collaboration with his son Manuel.

1939 - 2012 As author of Barcelona’s seafront transformation – through the refurbishment of the Moll de la Fusta – as well as of the Illa Diagonal, in collaboration with Rafael Moneo, Manuel de Solà-Morales i Rubió had a key influence

1932-2014 Urbanist and geographer Sir Peter Hall passed away in his city, London, at the age of 82, one year after the publication of his last book, Good Cities, Better Lives: How Europe Discovered the Lost Art of Urbanism, in which he defended urban

Company New Heroes   Germany   The project analyzes the necessary transition towards bioeconomy, and defends the ecological and also aesthetic value of biologically based materials, which create unique colors and textures like those of the mycelium panels of the pavilion...

MAD Architects   China   The design center for the fashion group Xinhee and its six subsidiary brands has a star-shaped layout, generating an efficient and flexible space capable of adapting to the local climate thanks to open porches and a central atrium that enable ventila