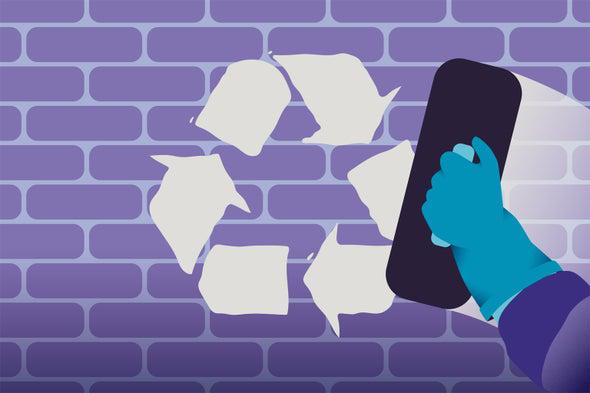 Concrete, the most widely used human-made material, shapes much of our built world. The manufacture of one of its key components, cement, creates a substantial yet underappreciated amount of human-produced carbon dioxide: up to 8 percent of the global total, according to London-based think tank Chatham House. It has been said that if cement production were a country, it would be the third-largest emitter after China and the U.S. Currently four billion tons of cement are produced every year, but because of increasing urbanization, that figure is expected to rise to five billion tons in the next 30 years, Chatham House reports. The emissions from cement production result from the fossil fuels used to generate heat for cement formation, as well as from the chemical process in a kiln that transforms limestone into clinker, which is then ground and combined with other materials to make cement.

Although the construction industry is typically resistant to change for a variety of reasons—safety and reliability among them—the pressure to decrease its contributions to climate change may well accelerate disruption. In 2018 the Global Cement and Concrete Association, which represents about 30 percent of worldwide production, announced the industry's first Sustainability Guidelines, a set of key measurements such as emissions and water usage intended to track performance improvements and make them transparent...

Because they grow quickly, and are evidently sustainable and furthermore easy to cultivate, microalgae are becoming an alternative to the use of fossil fuels in the field of construction (see Arquitectura Viva 140). The upcoming challenge seems to be

TAO | Trace Architecture Office   China   Kept open on its longer sides in order to maximize ventilation, the factory is built with cheap and locally available materials, such as bamboo stalks and concrete blocks and tiles.

In Praise of Cement

Aniceto Zaragoza   Public works have always – amd especially since the 19th century – been an engine for social and economic growth. In the world’s underdeveloped countries, almost any building work can have extraordinary transformative power; nevertheless, as national

Houses for the Future

Thomas T.K. Zung   In Milton, Massachusetts, around 1900, while other children were making square houses out of long sticks, Richard Buckminster Fuller, Jr., – ‘Bucky’, as he preferred to be called – was using toothpicks and dried peas to make triangle models. He had a

Javier Tejera Parra   How much does your building weigh? A quick calculation suffices to see that in general, buildings weigh too much. Lightness is no trivial matter if resources are limited, and a very efficient strategy from the viewpoint of sustainability is to design

Richard Ingersoll   Although climate-change-denier recently assumed power in the USA, all knowledgeable sources agree that the planet has entered a new geological phase, defined by Paul Crutzen as the ‘Anthropocene.’ After two centuries of intense human-produced gases r

Mark Wigley   Buckminster Fuller produced some of the most radical projects ever seen, devoting much of his extraordinarily energetic life to exploring the question of the house. Yet it was one of his greatest achievements to have never really designed a house as