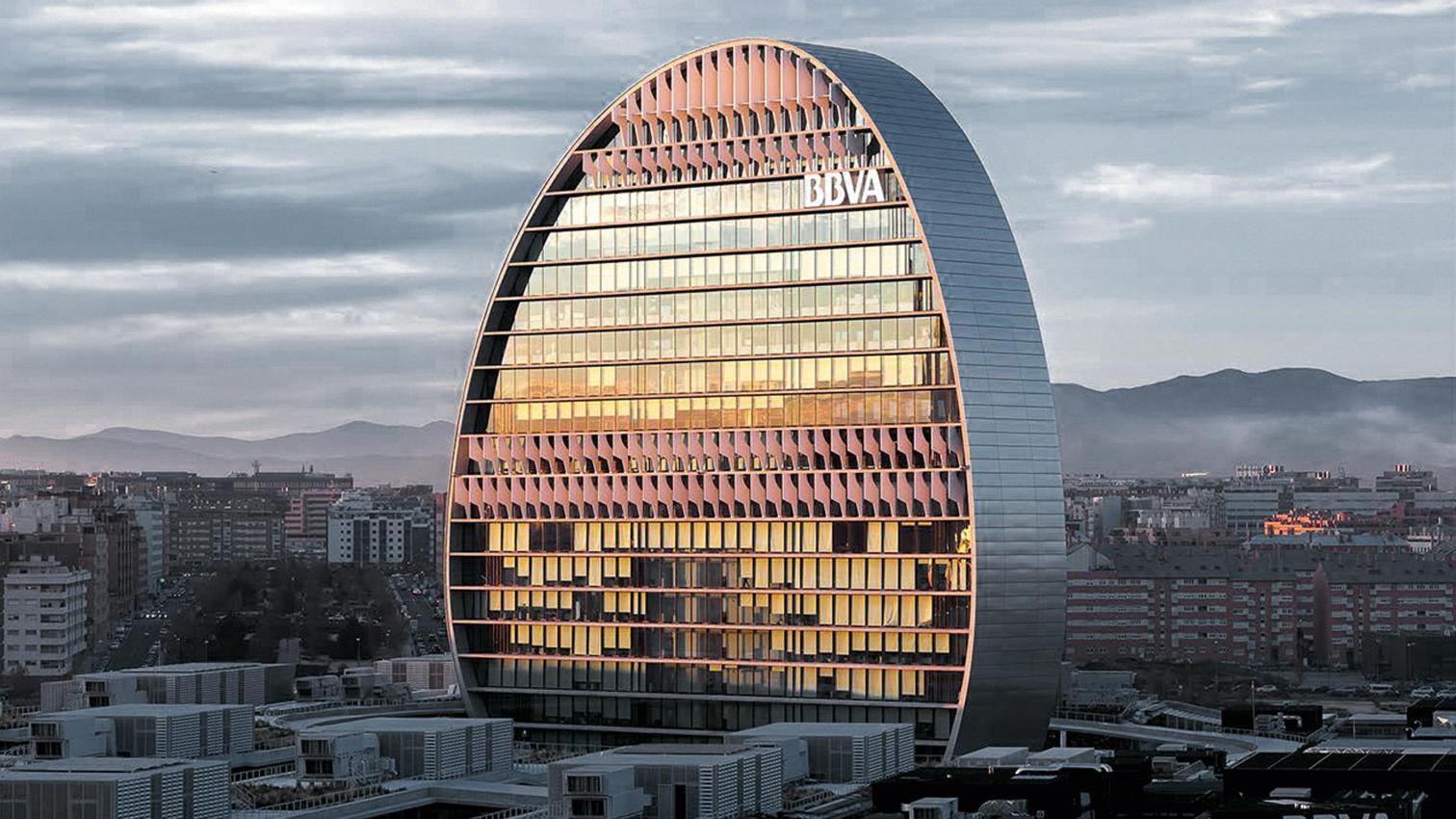 The Madrid neighborhood Las Tablas now features a campus or ‘city’ of the banking conglomerate Banco Bilbao Vizcaya Argentaria (BBVA). Its nickname, meaning ‘the sail,’ refers to the shape of the vertical construction that lords over the entire estate. Designed by the Swiss partnership Herzog & de Meuron, the complex consists of seven horizontally set buildings rising three floors and separated by narrow courtyards,which give the plinth of offices the appearance of a kasbah, and an upright volume 93 meters tall which, though iconic enough to give the premises a name, contains less than a tenth of the overall built space. Seen from many parts of the city of Madrid, this unusual structure of concrete, glazed and lined with a ring of stainless steel, competes in visibility with the four skyscrapers at the football club Real Madrid’s former Sports City. Its characteristic shape, which Jacques Herzog compares to a freehand drawing of a circle, is achieved through a combination of thirty-five radiuses of varying curvature. While the BBVA campus is the site of some 6,000 jobs, the tower with its useful width never exceeding 13 meters will only be used by some 300 people, including the banking group’s executive board. The architects’ efforts to situate the BBVA ‘city’ at the forefront of sustainability are commendable: the building presents a sculptural series of protective brise-soleils that will help to keep its thermal inertia stable, the materials used are environmentally low-impact, the facades are strongly insulated (double glazing, inert gas chamber, etc.), and the whole construction is equipped with a sophisticated system for reusing rainwater. 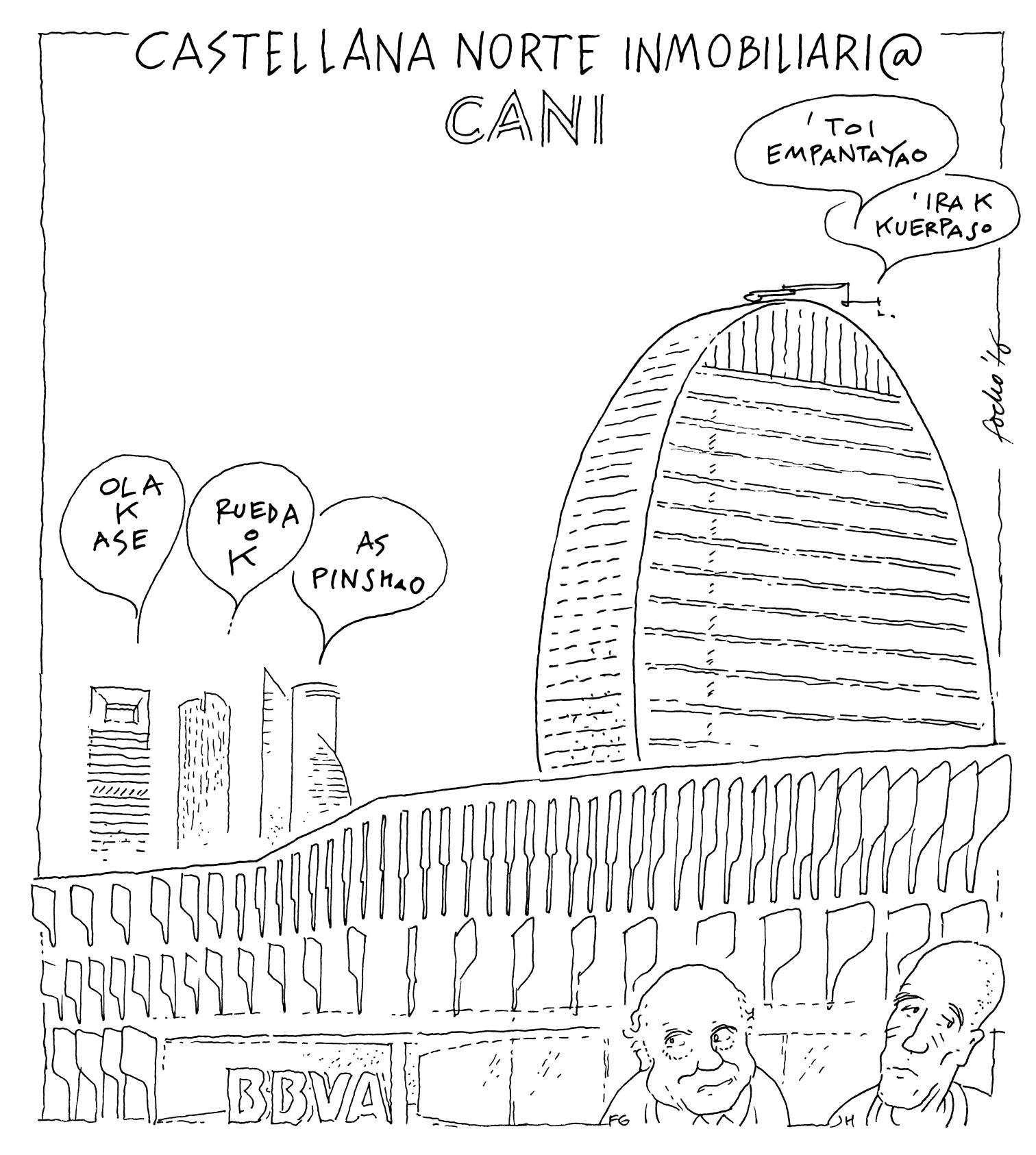 Rafael de La Hoz   Spain   Instead of maintaining several centers indifferent locations of a same city, an habitual organization for many multinational companies, Telefónica has opened this new business campus that brings together all its centers on a single plot in the urban

Herzog & de Meuron   Spain   The new headquarters for BBVA go up on a site facing the A1 highway on the periphery of Madrid, surrounded by newly built offices, commercial buildings, and scattered residential developments. The site is placed on the north of the Paseo de la Castel

Employees of BBVA have moved into two of the six long bays – corresponding to phase one of the operation – that form the Spanish multinational’s new headquarters. Under construction since 2010, the building rises north of the main axis of Madrid grow

Miguel Fisac   Spain   On number four of Castellana Avenue, Fisac raised for the company IBM one of his buildings with greater urban vocation. The protection from the heat of the afternoon sun – a priority for the company after the experience with one of their American hea

Rafael de La Hoz   Spain   In Las Tablas, an area within Madrid’s Fuencarral-El Pardo district, the Madrid practice of Rafael de La-Hoz has raised this freestanding construction with triangular floor plans where the loadbearing structure of the slabs is pushed outward, forming

Between a motorway and a Mediterranean forest located outside Madrid, Jacobo García-Germán has completed what is Europe’s largest cactus garden. The most unique thing about the project is that instead of pursuing the usual, predictable image of a dom

Herzog & de Meuron   Spain   The new headquarters for BBVA go up on a site facing the A1 highway on the periphery of Madrid, surrounded by newly built offices, commercial buildings, and scattered residential developments. The site, undergoing construction works since 2010, is pl

Facing the arcaded gallery at Nuevos Ministerios on Paseo de la Castellana in Madrid, the firms totem arquitectos and BETA.Ø have together come up with an efficient alternative to the conventional office building. The faceted volume has been expressl

Alejandro de la Sota   Spain   Alejandro de la Sota's radical sachlich attitude is concentrated in his compactly diaphanous entry to the 1970 Bankunión head office competition. The project shows an unshakable faith in the ability of a material, in this case Thermopane glass, to re 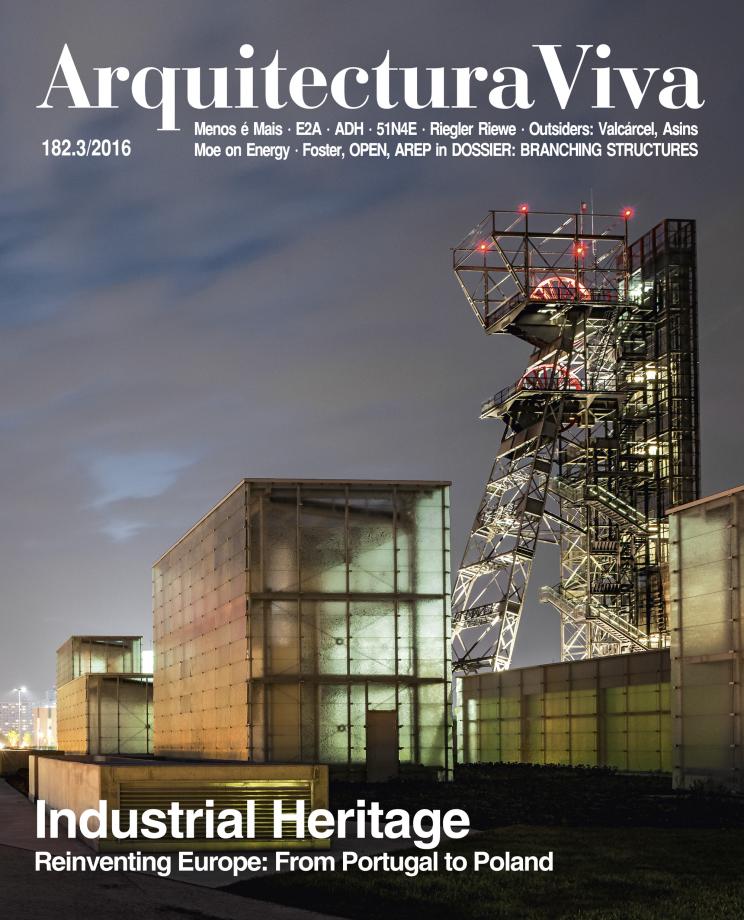