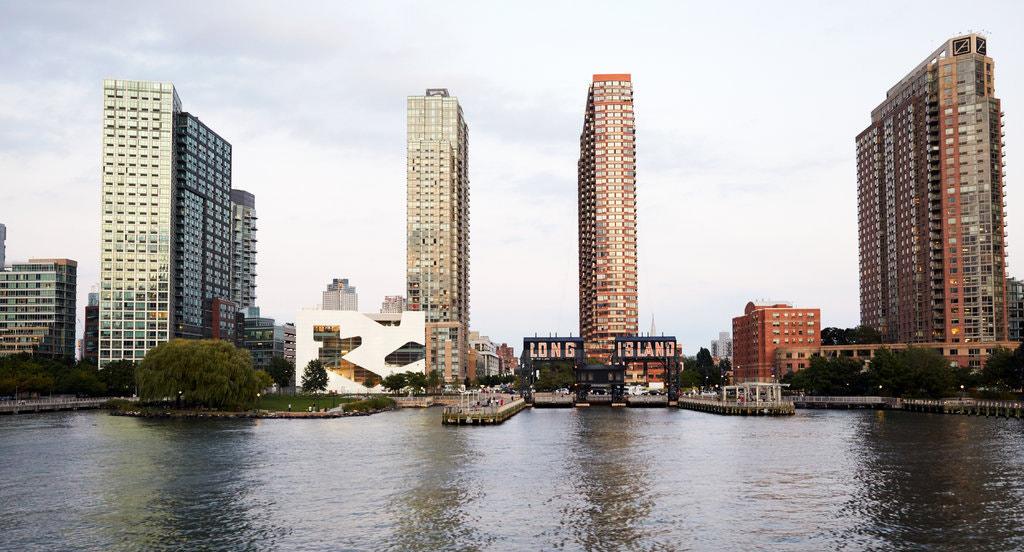 The Hunters Point Community Library is one of the finest public buildings New York has produced this century. But it cost more than $40 million, took a decade and almost died.

Against a phalanx of mostly dreary new apartment towers, the soon-to-open Hunters Point Community Library by Steven Holl Architects is a diva parading along the East River in Queens, south of the famous Pepsi sign. With its sculptured geometry — a playful advertisement for itself — it’s even a little like the Pepsi sign.

Compact, at 22,000 square feet and 82 feet high, the library is among the finest and most uplifting public buildings New York has produced so far this century.

It also cost something north of $40 million and took forever to complete. So it raises the question: Why can’t New York build more things like this, faster and cheaper?... [+]

For AT&T, Balancing Change and Preservation Under the Same Broken Pediment

The New York Times    Michael Kimmelman   A year ago, you may recall, the architecture firm Snohetta unveiled its initial plan to reincarnate the 37-story, 647-foot-high building with the Chippendale crown on Madison Avenue, between 55th and 56th Streets, which Philip Johnson completed in 19

When Manhattan was Mannahatta

The New York Times   Michael Kimmelman   Before the first Dutch colonists sailed through the Narrows into New York Harbor, Manhattan was still what the Lenape, who had already lived here for centuries, called Mannahatta. Times Square was a forest with a beaver pond. The Jacob K. Javits Fede

With a $450 Million Expansion, MoMA Is Bigger. Is That Better?

The New York Times   Michael Kimmelman   During the 1950s, New York’s Museum of Modern Art organized a famous photo exhibition called “The Family of Man.” In the wake of a world war, the show, chockablock with pictures of people, celebrated humanity’s cacophony, resilience and common bond.

The New York Times    Michael Kimmelman   You can see it on the skyline or along the Hudson River, upending Manhattan’s silhouette. The largest mixed-use private real estate venture in American history, it is called Hudson Yards. The first massive tower emerged at the apex of the High Line,

The New York Times   Michael Kimmelman   No real estate developer has profited more from the High Line than Related Companies, the global giant. Under its chairman, Stephen M. Ross, Related has, in recent years, become the biggest luxury developer in the neighborhood by a wide margin, erect

The New York Times   Michael Kimmelman   Frank Lloyd Wright’s Solomon R. Guggenheim Museum is still a shock on Fifth Avenue. The architecture declines to fade into the background or get old, never mind the building turns 60 this month. Happy birthday to one of modern architecture’s transcen