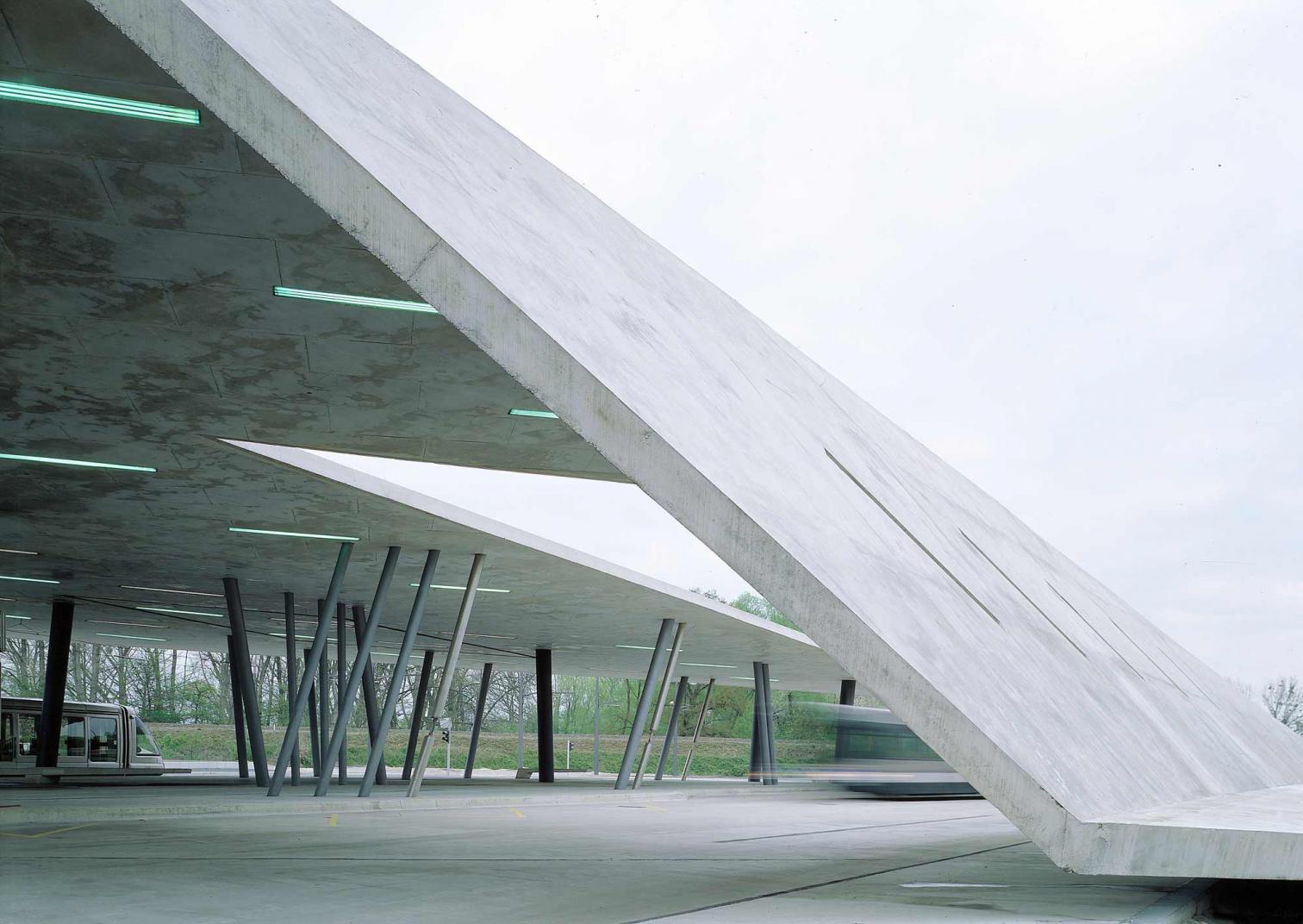 The aerial photograph shows an asphalt surface covered with white lines, diagonally traversed by a gray triangular piece. Like a geological fold, the concrete canopy of the Strasbourg terminal rises over the ground sustained by metallic pillars, extending to the floor of the parking area. Zaha Hadid approached this project with markedly graphic gestures and created a new urban landscape on the outskirts of the French city. And precisely this capacity to alter the surroundings was appraised by the jury of the European Mies van der Rohe Award, presided by David Chipperfield in its 2003 edition. The terminal by the Iraqi architect carried the day over four other finalists: a housing project in Chassé Park, in Breda, by Xaveer de Geyter; the renovation of the Palais de Tokyo in Paris, by Lacaton & Vassal; the residential complex Hageneiland in The Hague, by MVRDV; and the Ostfildern Town Hall, by Jürgen Mayer. The latter earned the emerging architect special mention and 10,000 euros. The award ceremony took place in Barcelona, in the pavilion of the German master that lends his name to the award.

Filarmónica de Szczecin The Philharmonic Hall of Szczecin in Poland, by the Spanish studio Barozzi Veiga, has won the 2015 Mies van der Rohe Award for Contemporary Architecture. Presented every two years and endowed with 60,000 euros, the prize recog

Zaha Hadid Just a few months after her death, Zaha Hadid was awarded the Gold Medal that the Royal Institute of British Architects confers annually on a professional whose work has had a significant influence on the advancement and dissemination of a

Zaha Hadid Architects   France   To reduce the pollution and traffic jams that Strasbourg endures, its authorities have launched a plan to encourage people to park their vehicles on the periphery and continue their trip into the city using only public transportation. Apart from the

MUSAC The Museum of Contemporary Art of Castilla y León, also known as MUSAC, by the architectsLuis Moreno Mansilla and Emilio Tuñón, won the seventh edition of the Mies van der Rohe Award. Among the 272 proposals from 32 countries, the jury of inter

Dutch Embassy in Berlin  After considering 242 projects from 30 countries presented by a formidable committee of experts, the jury presided by Zaha Hadid – whose terminal in Strasbourg won the previous edition of this biennial European award – announ

Neues Museum, Berlín Presented every two years, the Mies van der Rohe Award for Contemporary Architecture prizes the quality of architectural production in Europe. In the 2011 edition the prize has gone to the restoration of the Neues Museum of Berli