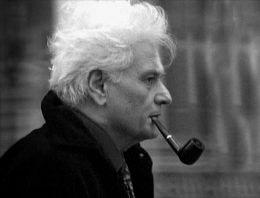 Considered the guru of an architectural current strongly inspired by his innovative philosophical line of thought, Derrida fathered the term ‘deconstruction’ that, conveniently manipulated, served rather as a striking slogan for an architecture formulated against the reigning postmodernisn than as a rationalist proposal driven to take action. The relationship of his thought with architecture started after an article he wrote about the folies of Bernard Tschumi for the park of La Villette and found later in Peter Eisenman the interpreter of the transfusion between disciplines. However, the fragility of this relationship does not obscure the philosophical dimension of this French Jew that, like other French thinkers of the 20th century – Albert Camus or Louis Althusser, for instance –, was born in colonial Algeria. Derrida was a boy that was drawn out of school by the anti-Semitic regime of Vichy, a bright student of philosophy, a enthusiast of French as language, a star in American universities, an obscure and unintelligible philosopher and, now after his death, a new classic of contemporary thought.

Kengo Kuma   On 11 March 2011, a powerful earthquake hit eastern Japan, triggering a giant tsunami that struck the coastal area and killed more than 20,000 people. Although I was not in Japan at the time, this disaster was not at all someone else’s problem. Since