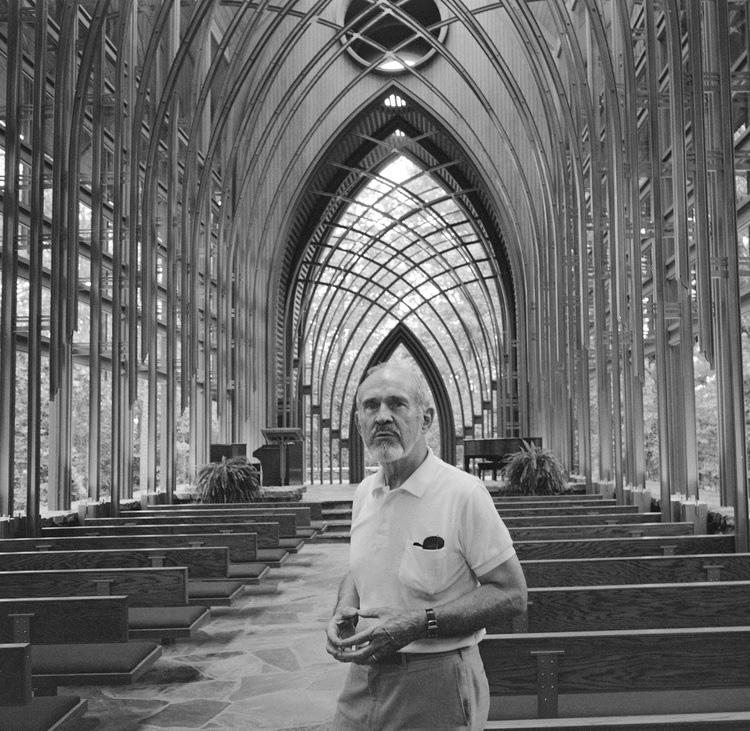 The fact that Prince Charles talked with much admiration of the architectural style of Fay Jones at the awarding ceremony of the American Institute of Architects in the year 1990 should by no means underrate the work of Jones, just as it does not redeem the British par excellence from a doubtful architectural taste. Jones, whose career began as a fellow student in the dry summers of Frank Lloyd Wright’s Taliesin compounds, to which he would return as teacher in 1953, was one of the master’s best known students, from whom he adopted a native organicism of wood and stone. His most prominent work, Thorncrown Chapel in Eureka Springs, Arkansas, is a subversive version of the typical French Gothic chapel, a tall and narrow building constructed in glass, wood and stone and supported by an intricate cross-lattice system. Devoted to both professional practice and teaching, his academic career began at the University of Oklahoma, where he taught for two years, and continued later at the University of Arkansas, his home state, where he taught for another 35 years, becoming the first dean of its architecture school.

From Private to Public

Flora Samuel   One paradox about contemporary architecture is that it needs to maintain dignified and delightful transitions between public and private space through space, detail and materiality avoiding the generic non-space that has become so prevalent in the co