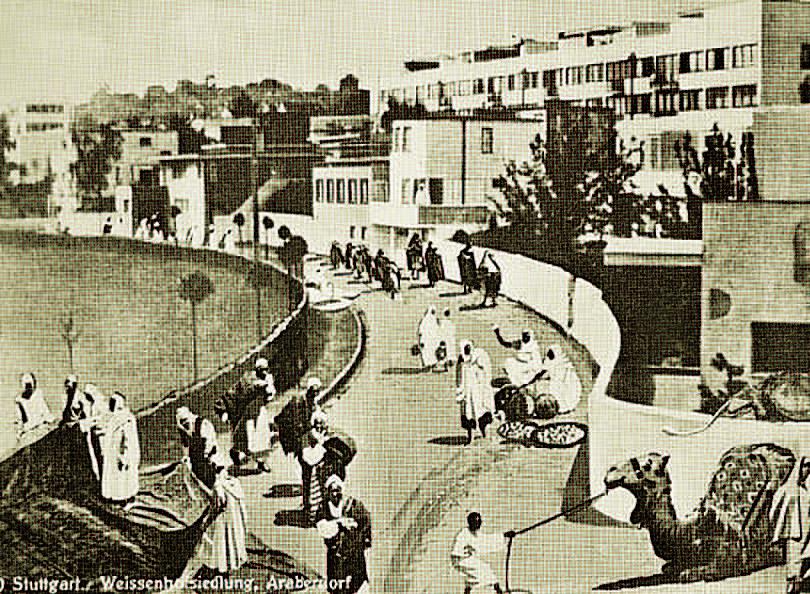 Across the atlantic, the Modern Movement became the International Style. The artistic and social Utopia that a group of young European architects had conceived in the twenties gave rise, in post-Depression America, to what would be the 20th century’s most characteristic way of building and designing. The Cartesian abstraction of the International Style was adopted by large corporations and political bureaucracies alike, to spread throughout the planet after World War II and achieve the unanimity once enjoyed by beaux-arts historicism. In opposition to that worn-out language, the new style rejected massive gravity, solemn geometry and dense decoration. It would instead be light, asymmetrical and naked. But by reducing the modern revolution to a mere formal mutation, the International Style stripped architecture of the ideological marrow that had given it consistency and sustenance.

The pavilion of the USSR by Melnikov and that of L’Esprit Nouveau by Le Corbusier were the two most representative emblems of modernity at the Paris Expo of 1925. 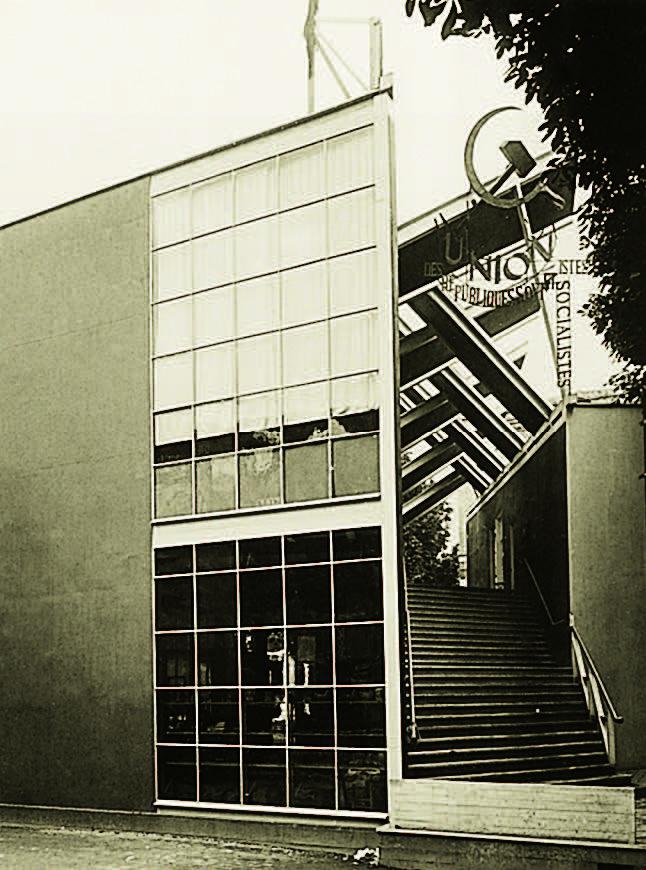 For architecture the rolling twenties were ‘the heroic decade’, a period when the pioneers of modernity, led by the German Mies van der Rohe and the Swiss Le Corbusier, invented the forms with which the new society was to be built. Every project of these avant-garde architects, however small, was an esthetic and political manifesto, expressing not only how one should build but also how one should live. White walls, large surfaces of glass and flat roofs together promised a future of elemental pureness, transparency and luminosity, besides functionality and economy: a more rational, more egalitarian, more beautiful world whose buildings and cities would be modeled on the efficient forms of organisms, machines or vehicles. And universal exhibitions became the principal sounding board for the propaganda crusade of this messianic conception of architecture. 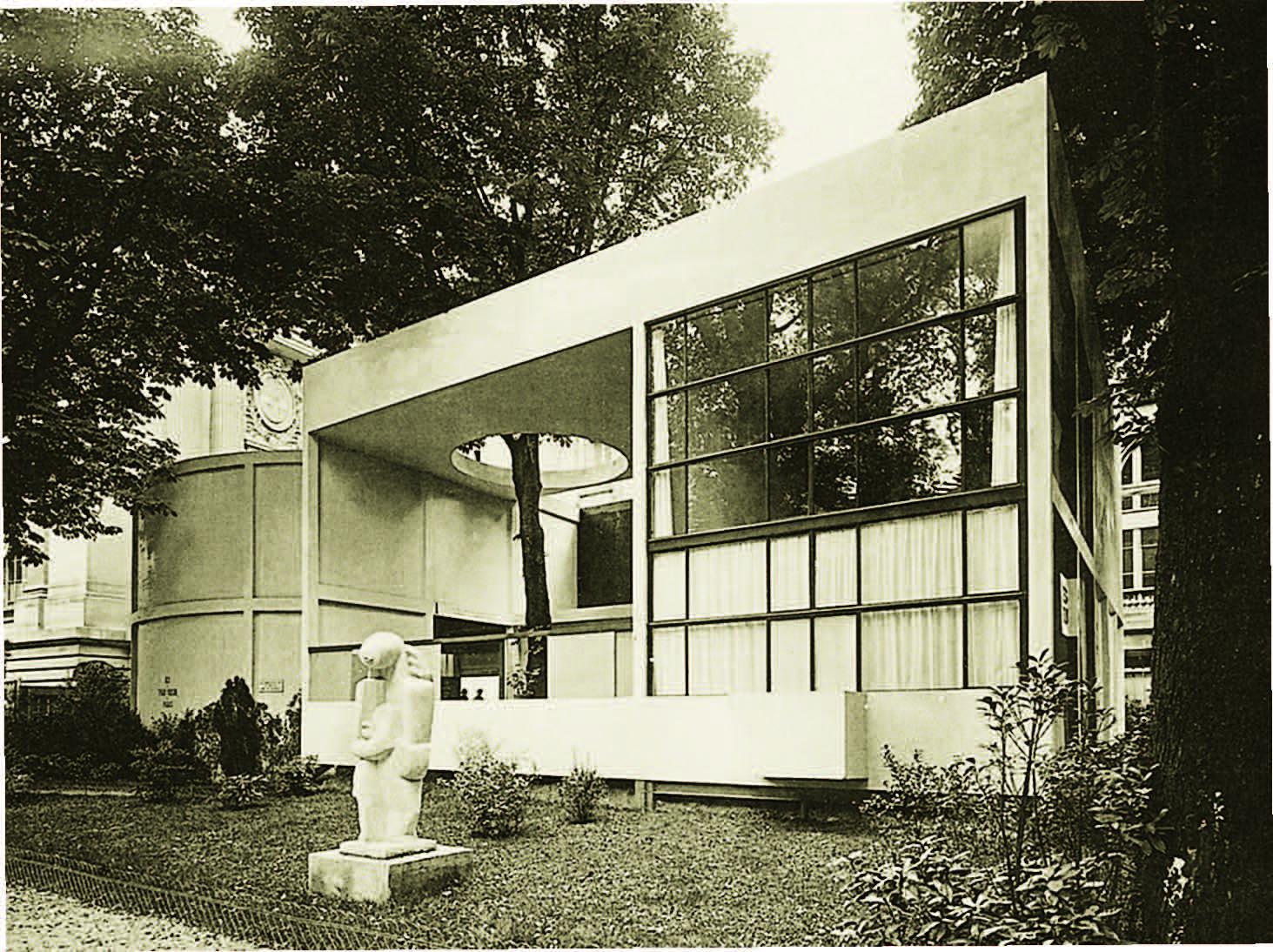 The flat-roof architecture of the Stuttgart Weissenhofsiedlung, built in 1927 by the main representatives of the Modern Movement, was caricatured shortly after as an kasbah inhabited by North Africans.

In the Exposition des Arts Décoratifs held in Paris in 1925, the new architecture was represented by two radical pavilions: that of the Soviet Union, designed by Konstantin Melnikov, which expressed the revolutionary nature of Russia’s political experiment through its industrial look, an angular geometry, and the diagonal movement of the huge staircase that fractured the exhibition space, merging interior and exterior in a grand theatrical gesture; and that of L’Esprit Nouveau, built by Le Corbusier in the form of an ideal dwelling in which to display the urbanistic Utopias, the mechanistic furniture and the purist works of art of the group revolving around the magazine of the same name, which he himself had founded and where his eloquent harangues on esthetic matters were regularly published. The rest of the event was a parade of happy, trivial, consumerist decor, halfway between aerodynamic and jazzy, much in tune with the carefree spirit of the times and bound to spread through Europe and America as Art Deco. 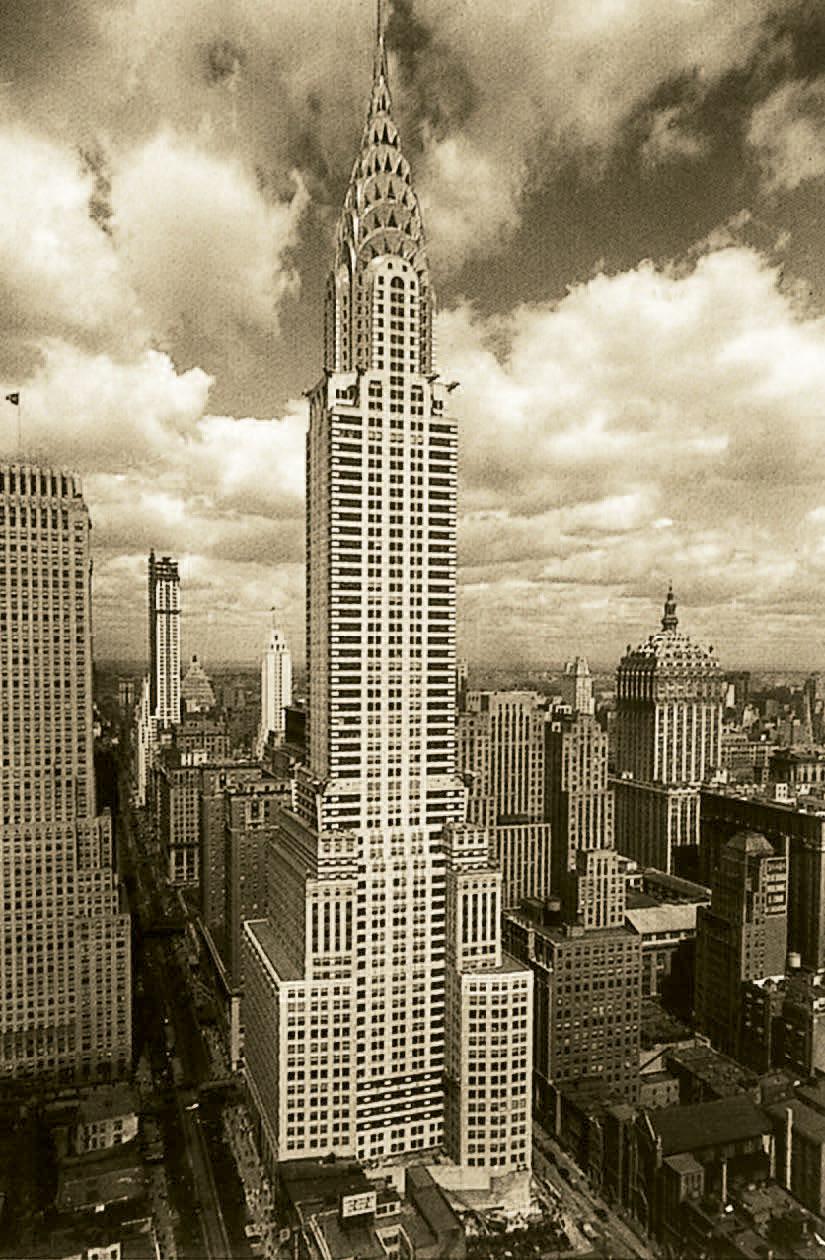 The mythical skyscrapers of New York, such as the Chrysler (1928-1930) or the Empire State Building (1929-1931), were more inspired by Art Deco and historicism than by the canonical modernity of European pioneers. 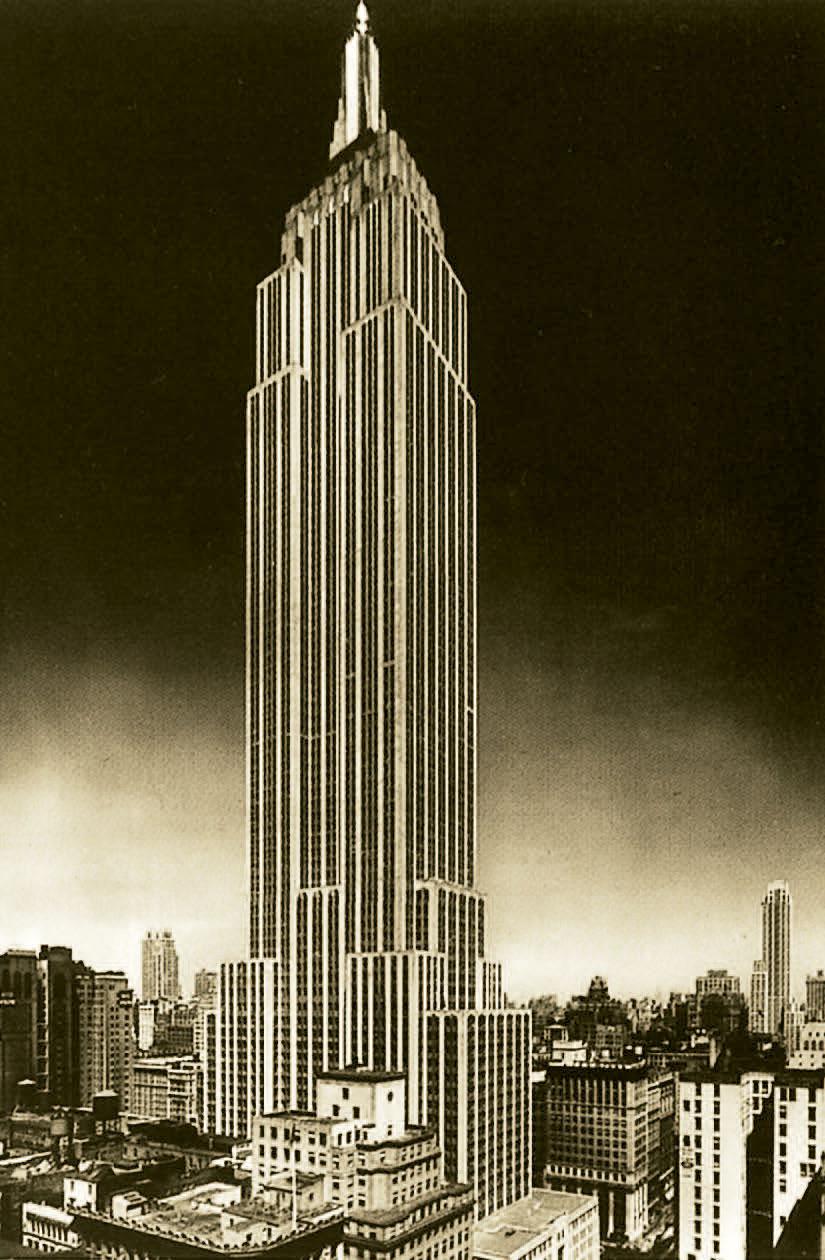 Two years later, the avant-garde architects would have the opportunity to present themselves to the world in a more solid, consistent way. Mies van der Rohe took charge of coordinating an exhibition of the German Werkbund on new housing prototypes, which led to the building, on a Stuttgart hill, of a small residential quarter whose sections were designed by many of the most innovative architects of the moment: Walter Gropius, Ludwig Hilberseimer, Bruno Taut, J.J.P. Oud and Mart Stam, besides Le Corbusier and Mies himself. At the time of its opening in 1927, the Weissenhofsiedlung in Stuttgart expressed the essence of the new style better than any other building or developments existing then, and its white, cubic, naked forms were as much a model for the followers of the movement to emulate as a target for the ire of its detractors, who considered the mechanistic look an unmistakable sign of Bolshevik sympathies and linked the complex’s compact configuration and flat roofing to the kasbahs of lower races.

The Modern Movement continued to be a minority phenomenon, limited to a dynamic circle of German, French, Dutch and Russian architects. In fact the architecture of the two great exhibitions of 1929 in Spain was still traditional: regionalist in Seville’s and classicist in Barcelona’s. But it so happened that in Barcelona the German pavilion was designed by Mies van der Rohe, who used the opportunity to crystallize, in a small and exquisite building, a genuinely new way of conceiving space. It was called ‘open plan’, and in it the traditional notion of rooms gave way to a space without defined boundaries, where zones where created only through freestanding walls or glass screens, and where even the line between interior and exterior faded and vanished altogether. Le Corbusier explored similar ideas during those years, and also through small projects: white, cube-shaped, horizontally-fenestrated houses which would culminate in a transcendental work of early modernity, the Villa Savoye, an immaculate horizontal box set on piles, posed like an abstract object on a meadow of the town of Poissy, not far from Paris. 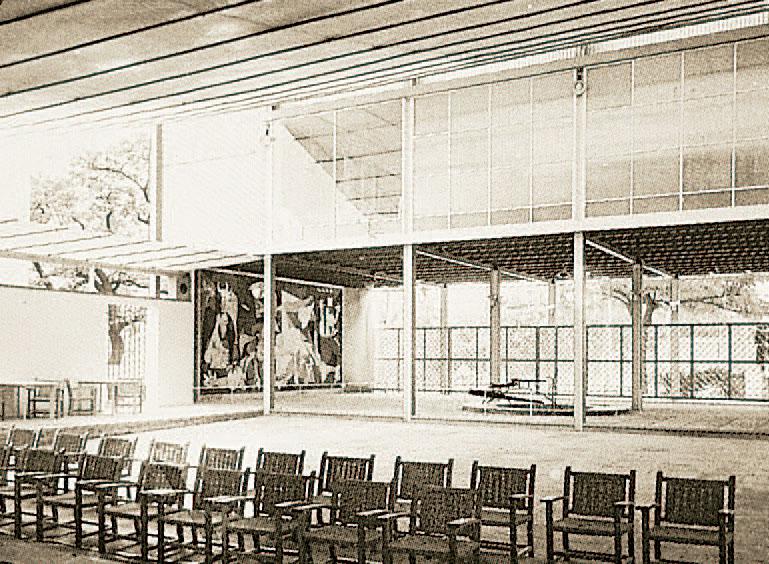 The Spanish pavilion in the 1937 Paris Expo is a late representative of modern values in a Europe that witnessed the rise of totalitarianism, symbolized there by two facing pavilions: the German and the Soviet.

While Europeans were carrying out this formal and ideological revolution through constructions of reduced dimensions, Americans also busied themselves transforming architecture and the city, but through gigantic buildings, the skyscrapers that were to be the most significant feature of the metropolis on the new continent. Born in Chicago at the close of the 19th century, skyscrapers had their heyday in New York of the twenties, where they began to shape what was to constitute one of the mythical images of the 20th century: the Manhattan skyline. Most of them were attempts to adapt traditional historicist styles to the scale of the new giants, but some preferred to go by European fashions like Art Deco. This, hence, was the style of the period’s most beautiful skyscraper, the Chrysler, whose dramatic crown remains a symbol of the city. At the time of completion in 1930 it was also the world’s tallest tower. The next year it would lose that title to the Empire State Building, but the Crash of 1929 had already put an end to this bubbly, confident chapter of American architecture. 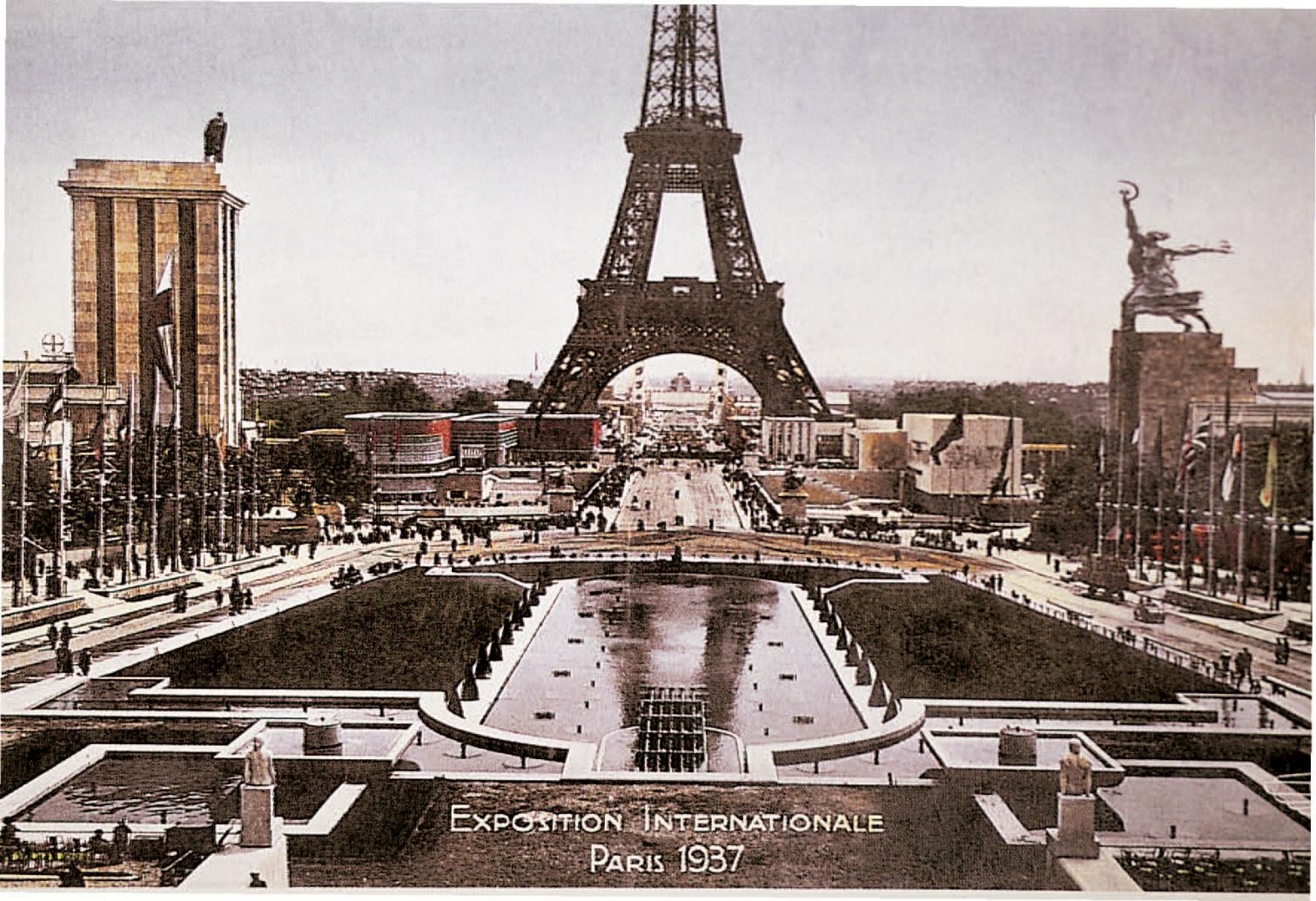 Orthodox modernity would arrive there in 1932 through an exhibition in New York’s Museum of Modern Art, entitled ‘International Style’, where Alfred Barr, Henry-Russell Hitchcock and Philip Johnson presented the works of Europe’s avant-garde architects. Emphasizing the coherence of its formal language but concealing its social and ideological dimension, the show coined a term and an attitude that would govern the future planetary expansion of modernity. Even as mere form, nevertheless, this modernity would be hounded by the totalitarian regimes that began to gain ground in Europe during the thirties, and was to find itself just as damaged by the social and political climate of democracies subjected to the erosion accompanying economic and political crisis. The growing tensions would finally result in the outbreakof the world war in 1939, with the ominous prologue of Spain’s own Civil War.

In the stormy global climate surrounding the 1937 International Exhibition of Paris, Albert Speer’s German pavilion and Boris Iofan’s Soviet pavilion challenged each other’s loquacious, solemn monumentality at the foot of the Eiffel Tower. The avant-garde Utopias that Mies’s German pavilion of 1929 and Melnikov’s Soviet pavilion of 1925 had accommodated were now a thing of the past. On the same fair grounds, the Spanish pavilion of Josep Lluís Sert and Luis Lacasa remained faithful to modernity, and rallied for help for the menaced Republic with the black-and-white cry of Picasso’s Guernica. It was not to be heard, and the fires that were burning in Spain would eventually spread to Europe and the world. The flames would also eat up the Modern Movement, and when the time came to reconstruct the devastated cities, the only thing left was that weak version of modernity we have agreed to call International Style.

Ángela García de Paredes   A major exhibition at the Fondation Louis Vuitton in Paris celebrates the pioneering work of the French architect and designer Charlotte Perriand.

Oliver Wainwright   The Cartier Foundation in Paris has presented a major retrospective on one of the most exceptional talents of contemporary architecture.

Nouvel at the Seine