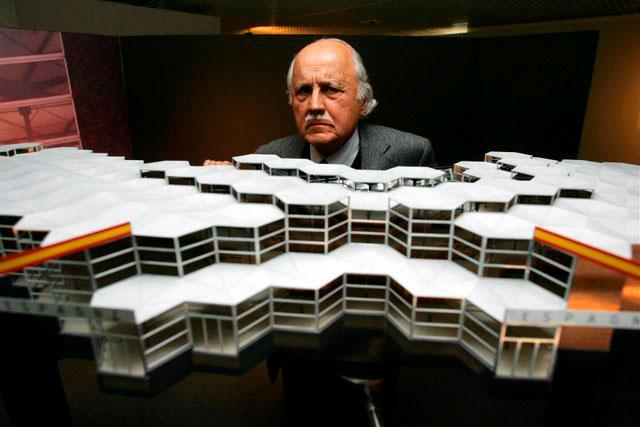 Forever linked to his inseparable partner Ramón Vázquez Molezún, who passed away in 1993, Corrales is, at the age of 83, a historical figure of Spanish architecture. Friend and collaborator of Alejandro de la Sota – with whom he designed the Miraflores de la Sierra building in 1957 – and many times laureate since he graduated in 1948, the Madrid architect still works with the same dedication and in the same semi-basement in which he has spent most of his life. His most important work, the Spanish pavilion for the 1958 Brussels World Fair, opened the door to modernity in public buildings, casting aside the granitic and pretentious style of the postwar years. The Huarte house (1966) and the Bankunión building in Paseo de la Castellana (1970-1977), both in Madrid, are two good examples of the natural evolution of the first rationalism after the agitated sixties decade. The jury proposed by the Fundación Antonio Camuñas, formed by professors of the Madrid School of Architecture, has appraised, aside from his well-known oeuvre, his perseverant defense of the values of architecture.

François Chaslin   Twelve years after the publication of Le Corbusier’s correspondence with August Perret, and nine after that of his epistolary exchange with the painter Charles L’Eplattenier (his teacher in La Chaux-de-Fonds), Marie-Jeanne Dumont presents Le Corbusie

A Political Theory of Pandemics

Manuel Arias-Maldonado   What does the Covid-19 pandemic tell us? In what way does it affect our perception of reality and how we relate with it? What lessons can be learned from this extraordinary episode? I will simply extract two teachings of the pandemic, and by distill