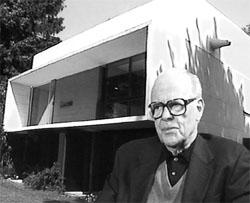 “Le Corbusier is intense. From a wealth of accumulated, assimilated, thoughtful experience he gives off waves of energy.” Wogenscky so expressed his fascination for an architect who was his mentor since 1936, year in which, after a casual encounter with the Swiss master, he abandoned his career as actor to join the studio on Sèvres street. After World War II, Wogenscky would not only work at the Jeanneret studio, but he became an associate, dealing with projects such as the Unités d’habitation of Marseille and Rezé-lès-Nantes and Firminy stadium. From 1956 on, already on his own, the French architect would receive important commissions in Beirut, the most significant one being the Lebanese Ministry of Defense. After Le Corbusier’s death in 1965, the close tie of his architecture with that of the Swiss, evident in his first solo works, would become even stronger when he took on the task of finishing some of this posthumous works. André Wogenscky, French Grand Prix in 1989, passed away at his house in Saint-Rémy-lès-Chevreuse, an example of prefabricated architecture built following the modulor principles.

Mathias Schwartz-Clauss   A historic agricultural enclave located in the southwest of France is the setting of one of the most extraordinary centers of artistic creativity in all of Europe.

Strength of Matter and Genius Loci

Fernando Menis   This publication is a journey into the work method that we apply in the studio, a tactic which always and as a priority starts off from the angle of respect for and attention to the place we are to build in, and to the client we are working for. Even

OMA - Office for Metropolitan Architecture   United Kingdom   Settled in London since 1809, when Nathan Meyer Rothschild left Manchester and established residence in the city, Rothschild’s premises are located in an urban area with a rich architectural heritage, in the heart of the City of London, adjacent to S

Lacaton & Vassal   France   The building goes up in a developing neighborhood on the outskirts of Nantes, on a plot bound by a tree-lined street to the south, and a railroad that is no longer in use and dominated by a large wooded area, to the north. The project makes the most